Well This Took a Turn

I've now watched this episode three times and the thing is, it's good every time. Of course, at 76 minutes long it's hardly an episode -- it's practically movie length, but that's a good thing as it has full story to tell in a single go, and thankfully, since it's on NetflixOriginally started as a disc-by-mail service, Netflix has grown to be one of the largest media companies in the world (and one of the most valued internet companies as well). With a constant slate of new internet streaming-based programming that updates all the time, Netflix has redefined what it means to watch TV and films (as well as how to do it)., the episode had to time to tell it (since Netflix doesn't really tell its creators how long it episodes have to be). 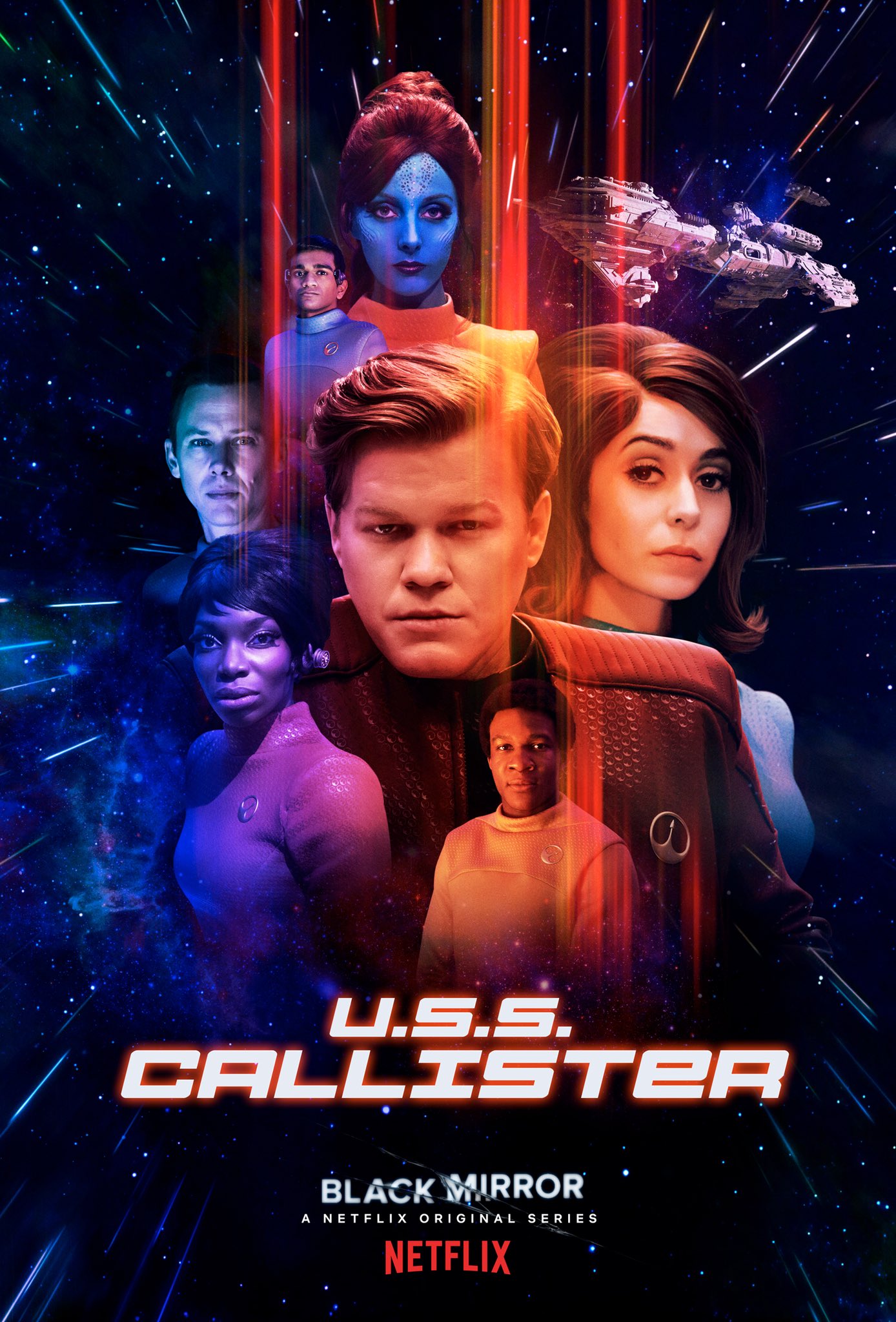 The gist of the story is that, years ago, there was a show called "Space Fleet". It was, in the Black Mirror universe (which I'm going to assume exists as I've heard some episodes have shared points of continuity), essentially their version of Star Trek. Robert Daly (Jesse Plemons) was a huge fan of the original series. After programming a procedurally generated space game (I'm assuming not that different from EVE Online), he created his own mod for the game, a sandbox mode where he could live out his Space Fleet fantasies.

The problem is that Robert was also pretty damn well disturbed. Although the show doesn't really get too deep into his background, what we are shown (after a fantastic opening sequence set in the game mod that plays, more or less, like an episode of The Original Series) that Robert has a way to clone people from his work and put them into his game. This isn't just him making avatars that look like them, either -- he has some kind of DNA sequencer that puts realistic versions of them, including their memories up to the point at which the DNA was sequenced, in the game. And he tortures them. He's an unforgiving God and they are his playthings.

When new girl Nanette Cole (Cristin Milioti) starts at Daly's company -- the company he co-runs with James Walton (Jimmi Simpson), although it's more accurate to say that Walton runs the company and Daly is his bitch -- he makes a copy of her DNA and shoves her into his game. There she meets versions of the all the office staff and learns, very quickly, just how far off the rails Robert will push things. Nanette, though, wants to find a way out so it's up to her to rally the rest of the "crew" and get everyone out of the game (deleted, escaped, or whatever, so long as they're free of Robert).

This episode plays with a lot of themes from the Original Series, but none are more overt than the obvious pastiche/parody of classic Trek. This is a loving tribute to the classic series, with just enough changed (of course) to avoid any kind of lawsuits. The technology is updated a little (although not quite as much as where the 2009 reboot took the design aesthetic) but there's still that hokey "let's put on a show with cardboard and glue" vibe. It's cheesy, but in a loving way. 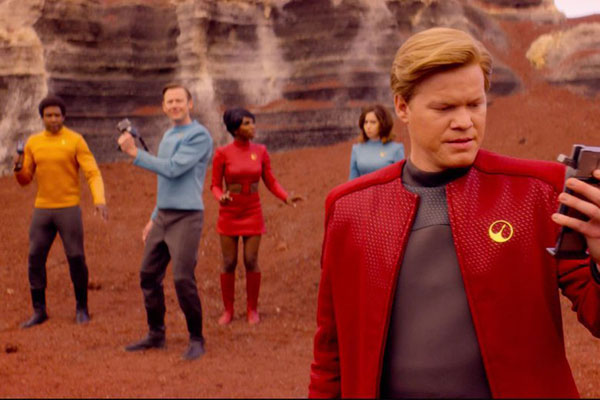 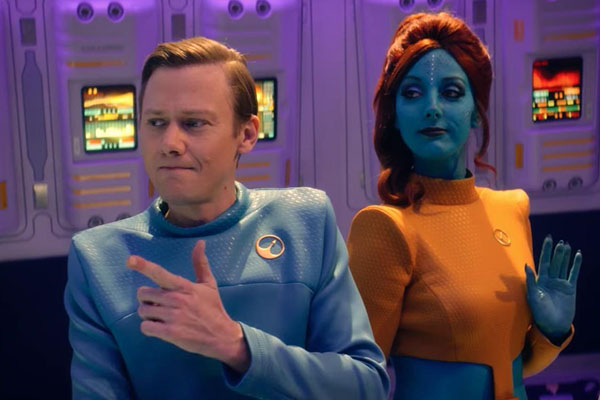 While the set design and technological details are classic Trek one thing I do appreciate is that the episode doesn't feel the need to try and slot everyone into versions of the classic characters. Sure, there's a navigator, a helmsman, and a communications expert (well, people playing those parts because Robert tells them to), but they didn't try to force each character to be Spock, or Uhura, or McCoy. They still get to be themselves, similar versions to the characters in the "real world", and they get great moments when they have to be "in character" in the world, as well as the times they can sarcastically make fun of it when the game world is in "off line" mode.

The Trek nods go beyond the basics of design and effects, though. In a way, the episode is playing with themes that the classic series would address, concepts like "what would happen if the Enterprise were taken over by a malevolent god." It's just that, in this case, the "God" is also the captain, creating a very different kind of plot. Still, it would be easy to see a version of this show (minus the external parts in the "real world") set in classic Trek with the crew waking up in a distorted version of their reality, an angry god running the ship, and the crew has to band together to stop them. That sounds like an episode Gene Roddenberry would have dreamed up.

When I went out and read reviews of the episode, one of the things the reviewers complained about was the DNA sequencer that Daly uses. I will admit that bit of tech is absolutely far-fetched and, in comparison to the kinds of tech featured in Black Mirror it seems out of place. Black Mirror (at least, the episodes I've seen of it, although I will admit I'm no expert on the series) tends to go for technology that's just close enough to our world to be believable but still speculative enough for us to go, "wow, yeah, that seems scary and I hope we never do that." The DNA game sequencer doesn't fit that mold.

What it does fit, though, is The Original Series. There was enough speculative tech and out-there ideas in the series that this DNA sequencer idea doesn't stand out. If anything, it's off-a-piece with the kinds of tech Trek would explore. An alien has a piece of tech that can program the crew into a computer for its enjoyment? Are we sure that isn't already an episode of the series, because it sure sounds like one. 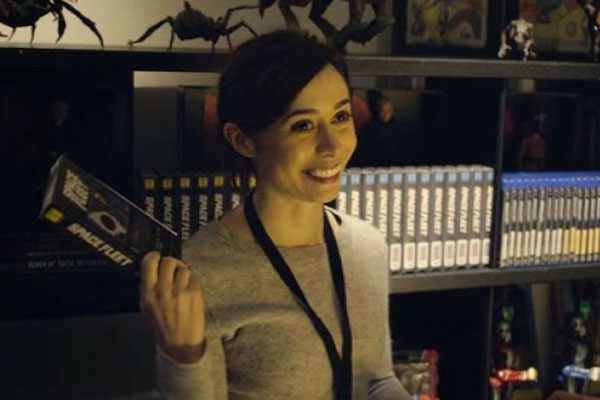 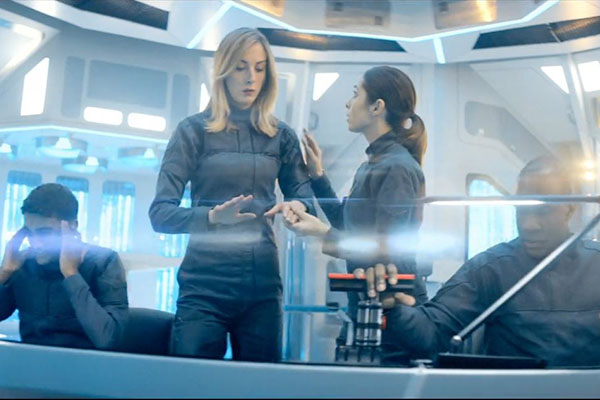 Of course, much of the credit for making this whole episode work (and be enjoyable despite some of the speculative and far-fetched ideas) has to go to the cast. Milioti is fantastic in this role, getting to play all sides of her character (and her character within the game) from shy to scared, angry to embarrassed, calculating to elated. It's a truly well-rounded role and she makes the best of every minute of it. She essentially becomes the leader of the crew (despite her small amount of time among them), the captain of the ship when Daly isn't around. She's the lead, which almost feels like a comment in itself on Trek.

For me, the second star of the show, though, is Jimmi Simpson. I've seen him in a number of roles, from Loser to Breakout Kings, Person of Interest, and Westworld, and he's always been great. He has such timing with a line, a weirdly cool nerdity about him that just always works. Its charisma, but a brainy kind, and I don't know that there are a lot of actors that can perform the way he does. It works so well in this episode where he gets to play the callow comic relief with such aplomb.

And, yes, Jesse Plemons is great to, playing a character that rides somewhere between Kirk and Kahn, leader of the ship and drunk on his own power. He's a great foil for the rest of the cast, but what i really like about this character is how he works as a commentary on entitled fanboys. He expects his playthings to do what he wants, to be in character at all times, and to never go off script or do anything he doesn't already expect them to do. Every fanboy that has complained about an actress being the wrong skin-tone, or the plot changing details they didn't like, is enshrined in nasty nerd-boy Robert Daly.

If there's any part of the episode I don't like, it's the ending which feels just slightly too pat. I'm not saying it isn't, in a way, well earned, but maybe it should have played out a little longer, taken just a little while more to get to its resolution, to tie everything up in a way that doesn't feel so quick, so neat. Still, it's a minor complaint, barely a scratch against the luster of this episode. "USS Callister" is just a great episode of TV, start to finish -- not only a great episode of Black MirrorBlack Mirror, but also a great parody of and commentary upon classic Trek.