Not With a Bang, But With a Whimper

When NetflixOriginally started as a disc-by-mail service, Netflix has grown to be one of the largest media companies in the world (and one of the most valued internet companies as well). With a constant slate of new internet streaming-based programming that updates all the time, Netflix has redefined what it means to watch TV and films (as well as how to do it). first announced that the company would be making its own original content (outgrowing it's roots as a DVD-by-mail company renting out films and shows made by other companies), it promoted this decision with a small slate of shows. The biggest name at the time was House of Cards, a twisted political drama that starred Kevin Spacey and Robin Wright. This show, from everything we could see, had the potential to be quite a dark, cold thriller, a political drama that promised great power and then great catastrophe. It had the makings of a real classic. 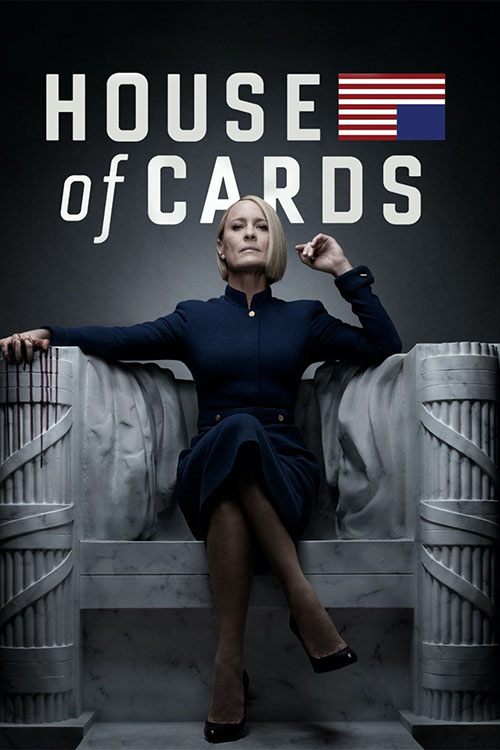 The series did start off with some promise. Rep. Frank Underwood, as played by Kevin Spacey, was a vile man but he certainly had charisma. The show had a solid hook on his shoulders, along with a fantastic performance by Wright as Frank's cold-as-steel spouse, Claire. Watching them slowly climb their way up the political ladder through machinations and, eventually, outright murder was interesting (even enjoyable) to watch. The fact is that this show played right to Spacey's strengths, giving him a scenery-chewing vile man to play (on that loved breaking the fourth wall and talking directly to the screen). As we'd all soon learn, that was the kind of person he was off-screen as well. It was the perfect type of casting, we just didn't know it when the show started.

It's hard to watch any of the first five seasons of House of Cards now, knowing what we do about Spacey and all the awful things he did (which you can go look up Online to save me the trouble of recounting them and then needing a long shower to try and get clean afterwards). Usually I'll willingly re-watch some of a series just to remind myself of what I might have missed, but for the recently released sixth season I just couldn't do it. Spacey is awful, and he's ruined a lot of great movies and shows now with his presence (such as The Usual Suspects and America Beauty, just to name two of dozens). Spacey wasn't always a great actor (such as in Pay it Forward), but when the film gave him good material, he could bring it. And now I won't watch those films again.

Netflix knew many people would have this reaction and so they fired Kevin Spacey pretty quickly after the revelations about him came out. While this was a good thing for them to do, it did hobble House of Cards, dealing the series a mortal wound it wasn't able to get over in its planned sixth-and-final season. Spacey was the center of the show, with his Underwood rising from Democratic Whip in the House to Vice President before secretly forcing the President to abdicate his position, elevating Underwood to the top position. The show was in love with his character and any time it seemed like the character would finally topple under the weight of all his schemes and plans, he's skate through once more. No one was a strong enough opponent to take on Frank and nothing could get in his way.

That is until he had a falling out with his wife, Claire. The fourth season was dominated by them working against each other, giving this season the best energy of any run of episodes. Having the two leads at each others throats proved one clear fact: the best opponent for Frank was Claire. The plot line was resolved when Frank made Claire his Vice President, which then set in motion what would have been the plot of the sixth season: Claire in the Presidential seat with Frank on the outside looking in. It would have set the show on its ear and propelled us into the final run of episodes as Frank made new deals with outsiders and Claire fought off all potentially opponents for her throne. 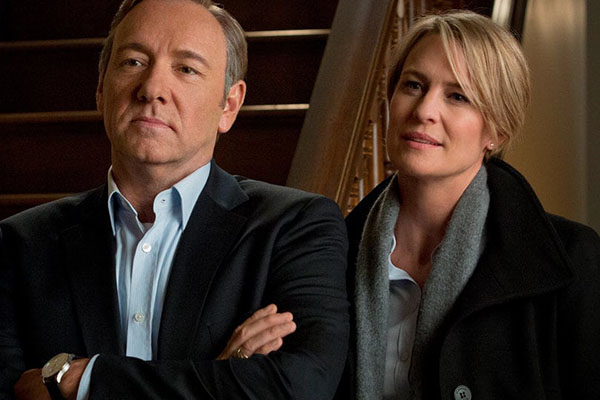 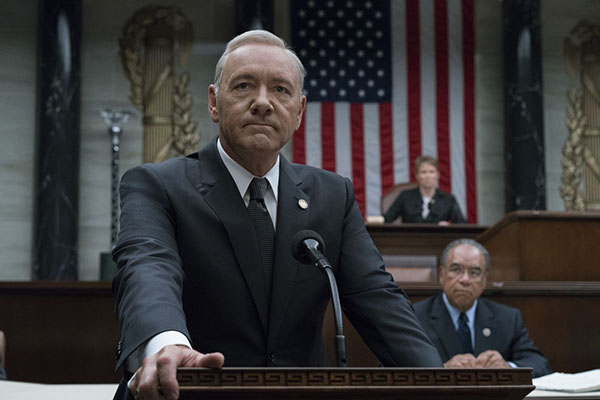 There are elements of this still in play in the sixth season. Instead of going up against Frank for the last stretch of the show, we have a new set of opponents: Bill Shepard (Greg Kinnear) and his sister Annette (Diane Lane), co-runners of a powerful industrial conglomerate. As it's explained in the show, Frank went to these two power-players for help, and in return he made them promises about what he'd do for them once he was in power. Then Frank died off screen (even if the ghost of him metaphorically haunts the entire final season). We pick up 100 days after Claire has taken over the Oval Office (a very quick time jump for a show that seemed to drag out every week of the administration otherwise). Claire now has to fend off these two vultures, honoring what promises she has to while rebuking them every chance she gets.

On its face, this is an interesting plot line and, if Spacey hadn't been fired from the show, it could have had some serious legs to it. Watching a desperate Frank try to best his powerful wife and reclaim his position in the universe is a strong plot line for a character that, up until the last season, had always seemed to rise to the top no matter to odds. It forces Frank into a position he's not used to, all while the woman he relied on for years and years holds the power he so desperately craves. This is the dynamic that worked so well in season four, Claire vs. Frank, and if the show could have done that plot line it would have sent to series out on a high note.

Instead, because we don't have Frank around, the show just skips all the setup for the Shepard family. Without Frank to anchor their plot line, they're just dumped on up part-way into her first term with an exposition dump to explain it all away (telling instead of showing). We're just supposed to fear these power-players because the show tells us to, but without any actions, without seeing them plotting and scheming ahead of time (without Frank for them to work with) we're left wondering who the hell these people are and why we should care. They aren't opponents, they're just people in Claire's way. And we know what Claire does to people that are in her way.

That's right: she kills them. We already know how ruthless she was, and for a foe to come up against Claire they have to be just as ruthless. They literally have to kill a bunch of people in their first few scenes for us to even care anymore. The Shepards don't emerge drenched in blood, wearing the faces of their enemies are jaunty hats, and that makes them less interesting (and less powerful) than Claire. 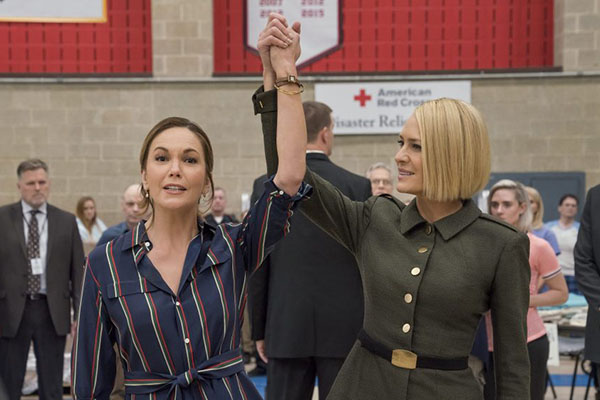 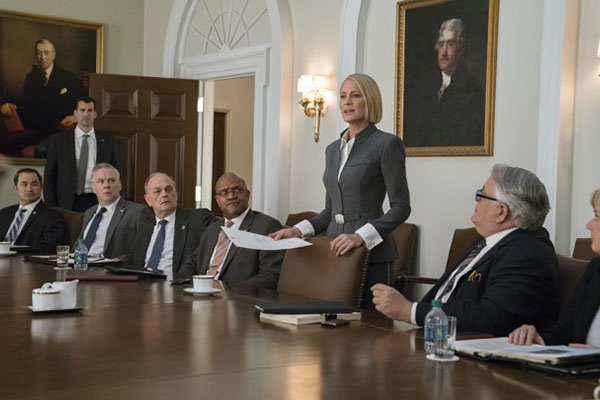 The show clearly recognized this as it tried desperately to find a surrogate for Frank while the Shepard plot line seemingly got up and running only to peter out completely. Drifting along in the background until it was his time to emerge as the foe was Doug Stamper (Michael Kelly), Frank's body man and faithful servant. Doug wants to ensure Frank's legacy remains intact, so he'll do whatever he can to force Claire into pardoning Frank and ensuring he goes down in the history books. This story makes sense from Doug's perspective, to be sure, as Doug really did clearly love Frank and wanted only the best for his boss.

The problem is that Frank doesn't have much of a legacy. He started a Work project (America Works, if I recall properly) that eventually went nowhere. He rigged an election (clearly), nearly started a war with Russia, and then was forced to resign. Oh, and he was suspected of multiple murders, all of which we know he committed. I'm not sure what part of that legacy Doug wanted to preserve, but it's hard to say Doug had a compelling argument. Frank was a terrible person and literally no one on the show (besides Doug) was sad he was gone.

Somehow this is the central conflict the show wanted to promote into the final confrontation: Claire v. Not-Frank for all the marbles? If it had been Frank instead of Doug, and we'd seen both sides plotting and scheming until a final confrontation, presumably where one of the spouses killed the other, that could have worked. Doug, though, is a poor substitute no matter how well Kelly played him, and the final meeting of the minds for the series just doesn't work. It betrays whatever ending could have ushered the show out on a high note, leaving House of Cards to die with nary a whimper.

Sure, the show would have done better to restructure the last season differently. Clearly the final eight episodes recycled scripts that had already been finished for a season with Frank still on the show. They scrambled, tried to make it work without him, and shoved Doug in where he didn't belong. But how do you fix that? I guess the best solution would have been to cast someone other than Kevin Spacey in season one, but by now, fives seasons later, that ship had sailed. House of Cards died in a way we should have expected: one card was removed and the rest of it toppled under its own weight. Fitting, in a way.