A Conjunction of Tedium

There is no doubt that NetflixOriginally started as a disc-by-mail service, Netflix has grown to be one of the largest media companies in the world (and one of the most valued internet companies as well). With a constant slate of new internet streaming-based programming that updates all the time, Netflix has redefined what it means to watch TV and films (as well as how to do it). hit absolute pay-dirt with The Witcher. The first season of that Henry Cavil-led show was absolutely brilliant, a heady mix of fantasy ideas carried by a gruff, burly, no-nonsense hero. It's story was twisty, it's effects magical, it's action strong. When it became an instant smash hit you could see why through every minute of its first season. This was what fantasy television should be. 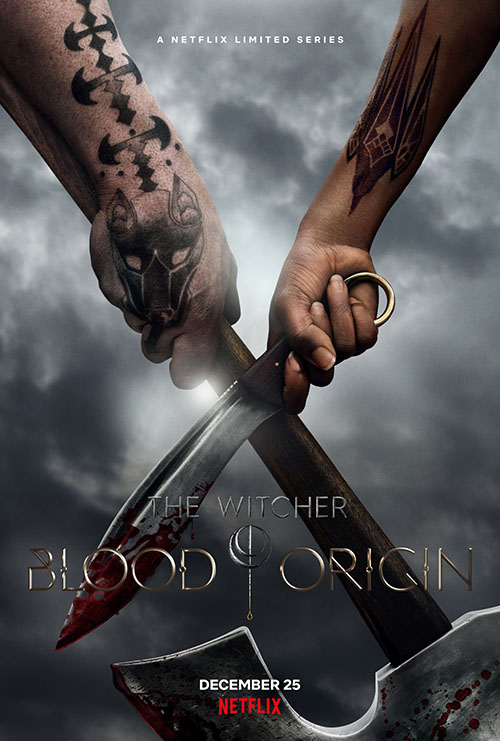 Since then, though, Netflix has struggled to build a solid franchise out of that hit first season. While the series managed to garner fans beyond those that had played the games or read the books, the further adventures in the Witcher have been anything to suit these new eyes and fandom's hearts. The anime prequel, Nightmare of the Wolf, felt under-baked even as it did provide solid background story for the main series. The second season of the main show got rid of many of the divisive storytelling techniques, but it also lost much of the charm. And now, with Blood Origins, fans have to wonder if Netflix even understands what made The Witcher so good.

Before we get into discussing this prequel I want to make it clear that I did not base my review on anyone else's thoughts on the show. While I had seen a few other review that criticized the storytelling in Blood Origins (a rather on-the-nose prequel name if ever there was one), I went into this mini-series with an open mind, choosing to let the series itself show me its magic (or lack thereof). I wanted to judge the show fairly, and will note that I actually enjoyed the opening episode of the series, generic as it was. The issue with the show is that the deeper it got into its run, and the more characters it introduced for its big band of big damn heroes, the more rushed everything felt. By the time Blood Origins reached its conclusion it felt like a tired, undercooked mess, not at all what fans needed from this distant prequel.

Taking place thousands of years before the main The Witcher show, Blood Origins is focused specifically on two things: the Conjunction of the Spheres, the big event (often discussed in the main show) that was the the start of the second era for the world (which apparently remains unnamed), and the creation of the first witcher in the world. Thus we are told (quite literally told) that seven heroes would come together in this tale to battle evil and fight to save the world. You know, the usual generic fantasy bullshit that every bad series tends to use.

In this case, our heroes are led by Eile (Sophia Brown), an warrioress who gave up her position in the Raven Clan to go off and be a musician, and Fjall (Laurence O'Fuarain), once of the Dog Clan who lost is place of honor protecting the royal family of Xin'trea when he fucked the King's sister. These two come together when assassins come to kill both of them (and end up killing Eile's sister in the process). These two swear an oath of revenge together, and they decide that the only way to get revenge on the perpetrators is to find other like-minded sellswords to join their cause. This includes: Syndril (Zach Wyatt) and Zacare (Lizzie Annis), celestial twin magicians; Brother Death (Huw Novelli), a skilled warrior; Meldof (Francesca Mills), a dwarven hunter on a quest for revenge; and Scian (Michelle Yeoh), Eile's one-time combat instructor. 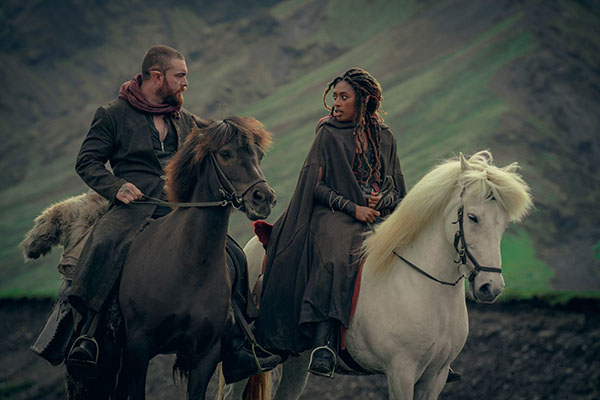 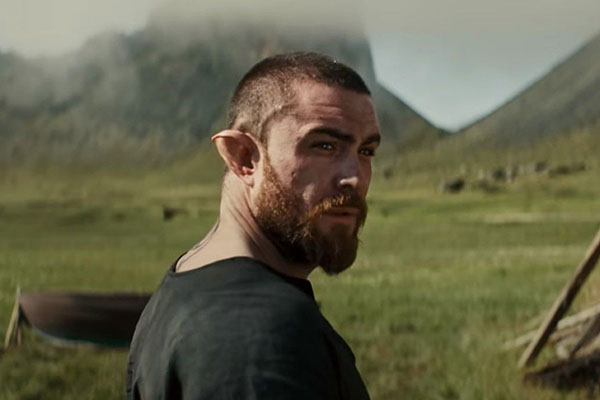 The people they want to kill: those responsible for the death of all of their clans. It seems that Merwyn (Mirren Mack), said sister of the Xin'trea king, didn't want to live under his shadow any longer so she teamed up with two other lesser members of the court: Chief Druid Balor (Lenny Henry) and Commander Eredin (Jacob Collins Levy). Together they summoned a beast from across the Veil, a killer who slaughtered everyone with any connection to the old royal court. Merwyn ascended as Empress and now has plans to rule the whole of elf kind as leader of the Golden Empire. It's up to the heroes to stop her, to stop the other villains, to kill the beast and, because of the weakening of the Veil, maybe just save the world as well.

The first issue with Blood Origins isn't that it's a story we've seen before (or other fantasy works of similar ilk), although it is, but that the show doesn't put in the work to invest in its generic storyline properly. Heroes coming together for a greater cause is a pretty standard story in any genre (hell, you could apply the same template to The Magnificent Seven, for example. When a show or movie invests properly in the setting and the characters, though, even a simple story like that can work.

In fairness to Blood Origins it does put in the work in its first (of four) episodes. Eile and Fjall get strong opening storylines, and even as they venture in the second episode to collect Scian, the show manages to build their characters while also sprinkling in solid action. Everything falls apart, though, in the last two episodes, almost as if the producers realized they only had four episodes and had to get everything they wanted to tell into the last couple of slots.

The third and fourth episodes are just a complete and tragic pair of episodes. Character introductions are rushed such that we don't really learn much about Brother Blood or the Twins, and what little we know of Meldof is that she's good with a hammer and loved a girl that died. Specific character beats are great but there's no enough development to really connect with any of these crew. The only reason we end up liking any of them is because of the performances of the actors and not any info the series actually gives us. It's threadbare at best, completely missing at worst. 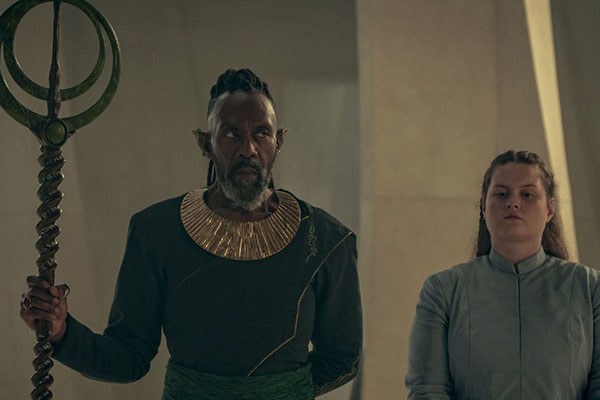 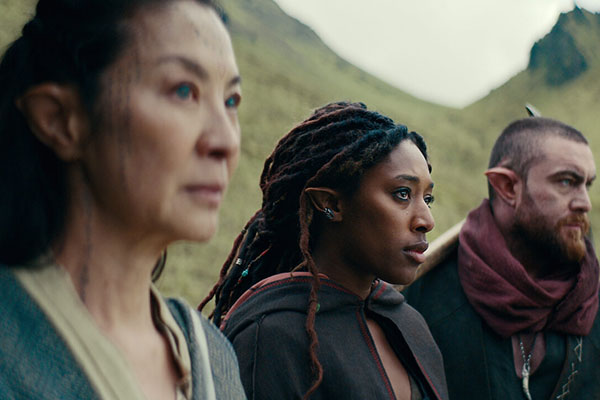 Further, the show doesn't even bother to develop the world around the characters. This is the world before the Conjunction of the Spheres, a bygone era with its only politics, its own rules of magic, and so much else. We hear about clans but never learn about the clan structure or how it relates to elf society. We learn that elves had their own kind of magic before the Chaos Magic of the world of The Witcher was introduced, but we never get the rules for how their magic works. In fact, characters use the magic any way it suits the story, just saying, "hey, we can do this," as it that makes sense even when it doesn't. Crap just happens in this world to suit the needs of these four episodes but none of it really makes any logical sense. It's bad world building.

The biggest issue with the show is that it's two main events -- the Conjunction of the Spheres and the creation of the first witcher -- feel like afterthoughts. One of the heroes is turned into a proto-witcher to suit the needs of the story (so they can go fight the big beast), but the rules for how this witcher are made don't line up with what we've seen in the main series. Worse, their story ends with this prequel, meaning their creation doesn't even have any bearing on the witchers to come. Their existence is pointless here. Maybe if the Conjunction meant more to the story the new witcher could have as well, except the Conjunction happens in the last minutes of the last episode, and all the changes it would make to the world are completely glossed over.

Bear that in mind: the show tells us at the very start that Blood Origins is all about the Conjunction of the Spheres, that this tale is important to the world because of that... and then it ignores the Conjunction almost completely. "Oh yeah, this thing that happened? Totally important. Trust us." The show wants us to care because all of these story details are important to the future of the world, but then the series itself doesn't care enough to explore any of it. It's absolutely baffling.

In years past Netflix was criticized because it's shows were overly long and boring, devoting 13 episodes to a story that should have been half that. With Blood Origins I'd argue that the opposite is true: the episode cont is cut so far to the bone that the show can never really find its legs once the adventure begins. It has a promising start, taking its time to introduce our duo of heroes, only to then have to rush through everything else. It leads to the most unsatisfying conclusion I think I've yet seen from a fantasy work (and I'm even counting the shows that were canceled before they could be completed). 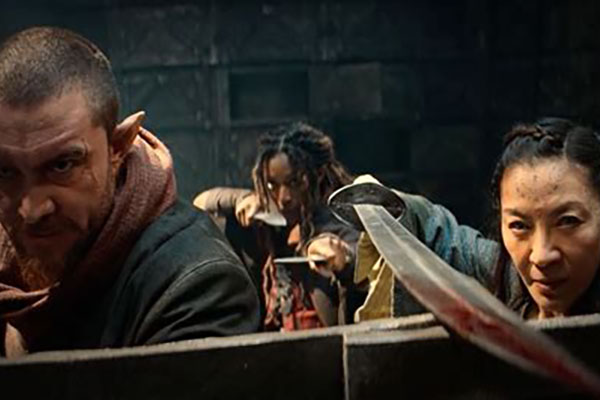 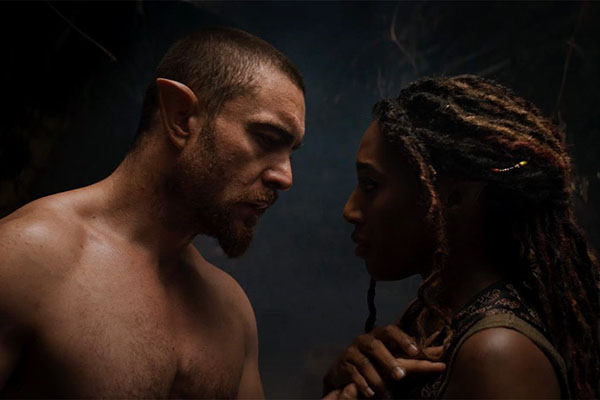 I get what Netflix is trying to do with its Witcher franchise. The streamer wants to keep people interested in the world even while it takes a year or more to produce a single season of the main show. Thus we get a spin-offs that keep us in the world without featuring the main characters from the show. It makes sense from an engagement stand point and I don't fault the idea. I fault the execution. A series like this needs time to grow and breath, to develop its cast of seven so we care about all of them, while also defining the rules for this version of the world that we've never seen before. Blood Origins has neither the time no consideration to do any of that.

I'm not saying that had the show been given eight episodes it could have done any better, but I suspect maybe that would have been the case. Considering that the first two of these four episodes were the shows strongest, that they actually shows some care for characters and world building, I do think that a longer run for this prequel might have allowed the writers time to flesh everything out. At the very least I think it would have been worth the effort to try instead of getting this truncated mess of a show.

Make no mistake, The Witcher: Blood Origins is a handsome show with a game cast that do their best. The elements were here to make a good prequel for the series. It all came down to execution and, on this front, Netflix completely dropped the ball. If the streamer wants to give us prequels and sidequels that flesh out the world they need to do a damn sight better job of getting us engaged with the material than they did in Blood Origins. This is, without a doubt, bad TV.