A Blurry, Mixed Up Mess

Much has been made about the unconventional way NetflixOriginally started as a disc-by-mail service, Netflix has grown to be one of the largest media companies in the world (and one of the most valued internet companies as well). With a constant slate of new internet streaming-based programming that updates all the time, Netflix has redefined what it means to watch TV and films (as well as how to do it). has handled its programming model. Instead of putting out shows week-to-week, Netflix has (by and large) released their seasons in a single chunk, all at once. Some shows have been done on a weekly basis (like the few times Netflix tried to do talk shows), and others have seen their seasons released in parts, a few episodes at a time, but generally Netflix seems to prefer releasing big chunks of eye-catching content instead of courting weekly water cooler chatter with weekly episodes. 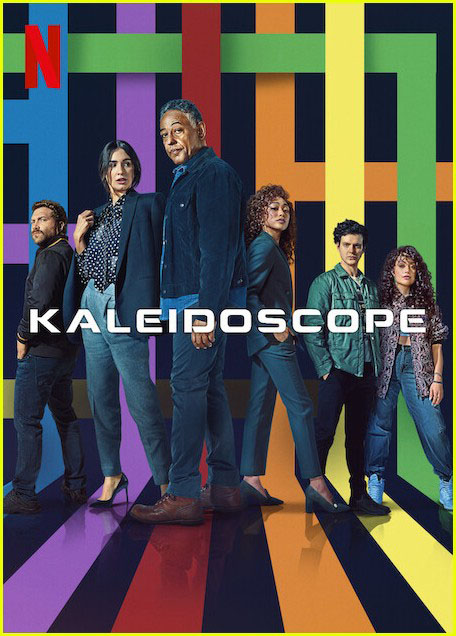 The last year saw Netflix take a tumble, their stock price dropping after they lost subscribers as people started leaving their home in this (vaguely) post-COVID world. While other streamers have come along and gone for weekly releases to keep buzz focused on their shows, Netflix has refused to shift to that kind of schedule. They've dug in, looking for other ways to get people interested in the core Netflix product. Yes, they've added an ad-based low-end tier (that no one cared about), but they've also started flirting with different ways to release the blocks of content. That's how we have Kaleidoscope, the 2023 mini-series where the episodes are in a slightly different order for each viewer.

This isn't the first time Netflix has released a show with the episodes all jumbled up; they pulled the same trick with the first season of Love, Death, & Robots. That show, though, was an episodic anthology without any linear story told across the episodes. Kaleidoscope, by contrast, is a single narrative broken up into eight episodes, the first six of which can be viewed in any order. At least, so the producers say. In practice, though, the weird release order makes for a linear series that never really finds its momentum until the season is almost over. It's a bit of a jumbled mess, with some really poor decisions along the way, meaning that the most interesting thing about the show is how it was released and not the show itself.

The series focuses on Leo Pap (Giancarlo Esposito), a master thief who, over the course of 24 years, goes on quite a journey, from a cat burglar, to reformed former-criminal, to a guy looking for one last score, sent to prison, escapes prisoner, and then, finally, mastermind of the world's greatest heist. Along the way he makes a cadre of pals -- Peter Mark Kendall as smuggler Stan Loomis, Rosaline Elbay as chemist Judy Goodwin, Jai Courtney as safe cracker and hitter Bob Goodwin, and Paz Vega as bent lawyer Ava Mercer -- gathering them all together so then can pull off his master plan.

The heist: to rob the ultra-secure vault at SLS, the company owned by Roger Salas (Rufus Sewell). Years earlier Salas left Leo out to dry on job. This resulted not only in Leo going to jail but also Leo's wife dying (as she was at the site of the job for unrelated reasons and gets caught in their escape plan as it all goes sideways). Years later, all Leo wants is revenge on his former friend, as well as to reconnect with his daughter, Hannah (Tati Gabrielle), who just so happens to work for Salas. It's a twisty game Leo is playing with no guarantee he can pull it all off. 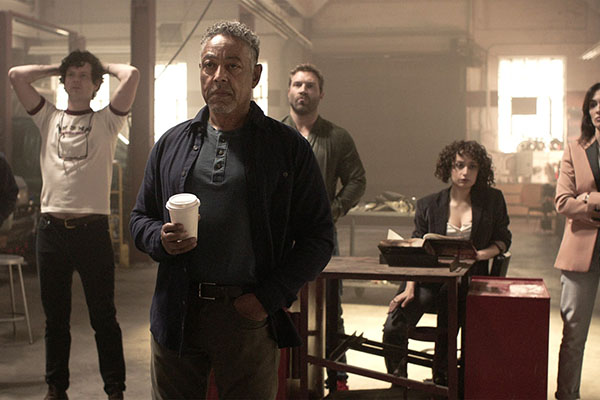 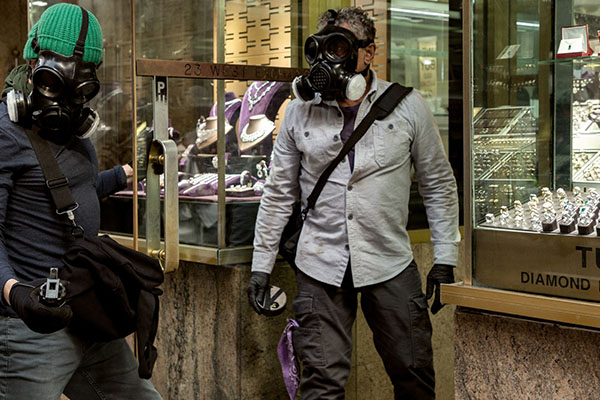 If we want to credit the concept, there are few genres of storytelling that could lend themselves to a jumbled up structure than heists. The modern way to tell a heist story is to show us the plotting of said crime alongside parts of the caper going off. It's a back and forth, not entirely linear way to tell the story that really works to keep you in the moment. If you wanted to show a heist and let the various bits and pieces mix themselves up before the last episodes (which revealed the final caper), I could see that working.

That is not how Kaleidoscope approached the material. Instead of, say, showing us parts of the caper from each character's perspective, in a kind of mixed up, Rashomon style, we instead get single episodes at different time frames in Leo's life. Episodes are set: 24 years before, seven years before, six weeks before, three weeks before, five days before, the day of the Heist, the morning after, and six months after. These are huge chunks of time in between with not all of these episodes giving us any details we need to understand the heist better.

For my viewing, Netflix gave me the episode 24 years before first, which allowed me to meet Leo before he went to jail and had to plot the heist. It's a good opening episode, but for anyone that got it at a different spot on the timeline, it would be a entirely superfluous bit of storytelling that wouldn't inform us about what we really want to know: the heist. I then got the episode 5 days before, with all the info I needed to know about what we next. But that meant that the episode set seven years before, when Leo escaped prison, did little for me at that point. Similarly, the plotting six weeks and three weeks before filled in details I'd already figure out on my own, making them just as pointless.

Considering the large swath of time this series covers, it frankly would have been better for the series to go in linear order so we can see the slow build up of Leo's life, appreciating this as a character study of the man instead of this jumbled focus that leaves us unsure who we should really care about. It doesn't help matters at all that, because of the jumbled storytelling, the series can't really put in any major character changes, episode to episode, because if things were changed too drastically we, the audience, would have no clue what we missed in the interim. The series has to be too controlled, too staid, all due to its format. 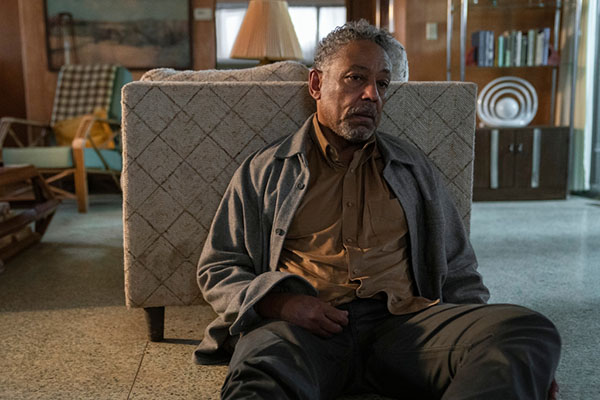 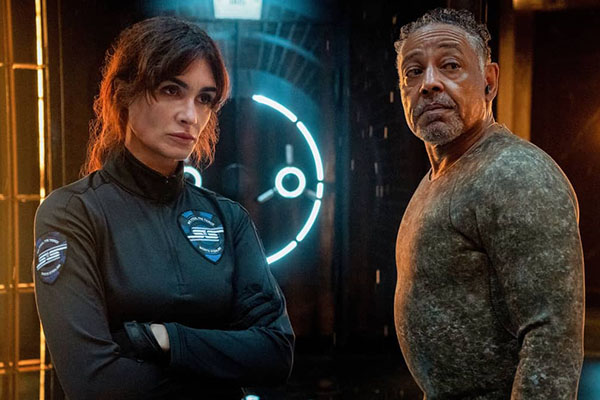 And while we're talking about poor decisions made, setting the first episode 24 years before everything else in the series means we have to see various actors dressed up in really terrible cover up makeup. The effects used to make Giancarlo Esposito and Rufus Sewell look 24 years younger were laughably bad. It frankly would have been better if the producers simply hadn't tried to cover it up at all as it would have been far less distracting. Or, maybe, recast the actors for younger stars in this early episode, except they probably didn't want to do that in case someone saw this episode far later in the season's run. "Who is this young dude running around and why should we care about them?" Again, the structure hurts the show.

If you can get past all that, the fact is there really isn't much of a heist to this heist story. The details of the actual heist are kept hidden until the final episode, which means we don't really learn anything about what the people are gonna do until they do it. "White: The Heist" is a rushed episode that has to cram the entirety of an Ocean's Eleven of a heist into 40 minutes, meaning we really don't get to see the criminals act super competent. Things have to gloss past quickly and just happen for the sake of things happening. The heist is, in essence, the least interesting part of the actual caper, which is the opposite of how it should work.

The most interesting episode is, in fact, the penultimate one, "Pink: 6 Months After", which shows us the longer term aftermath of the caper. Without spoiling anything (although I doubt anyone would really want to watch this series after reading this review) let's just say that things do go well for the criminals after they pull of the big caper. Here, in this episode, we finally get something amounting to real stakes, and proper character development. All the things you'd want in a crime series such as this. This had all the drama the rest of the series was missing and it was he most compelling watch of this whole, failed project.

I like the idea of a series you can watch in just about any order, and I do applaud applying this to a caper story as that would seem to be the right way to handle it. But the flaw in the execution comes from the way the episodes are broken up, doing it by periods in time instead of focusing on different characters. If we could have had episodes like "Mr. Pink: The Hitter", "Mr. Orange: The Smuggler", "Mrs. Green: The Chemist", each one showing us an hour from their perspective, both in the heist and (non-linearly) some moments before that led them to this moment, I think that could have made for a more compelling caper and much better TV. I understand what the producers wanted to do here, they just failed to make it happen in a functional manner.