The Rise and Fall of the Heroes

The Witcher: Nightmare of the Wolf

I don't know if the first season of The Witcher can be classified as an unexpected hit but it certainly came out of nowhere for me. Although I knew the games were popular (and certainly seemed more popular among nerds I knew than the books that technically spawned them), there wasn't a lot of buzz going into that first season. People had doubts if Henry Cavill could properly play hero Geralt (after "what he did to SupermanThe first big superhero from DC Comics, Superman has survived any number of pretenders to the throne, besting not only other comic titans but even Wolrd War II to remain one of only three comics to continue publishing since the 1940s.") and most of the discussion about the show was how it was going to be "the next Game of Thrones" (right as the popularity for that series was very much on the down swing). At best it felt like The Witcher 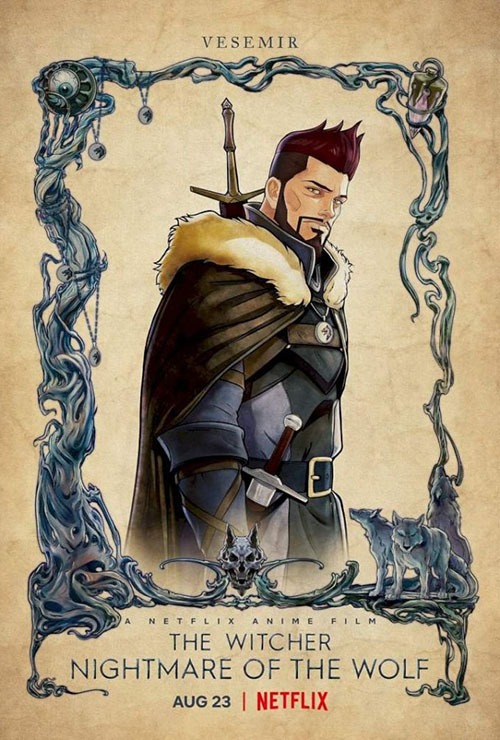 And then it absolutely exploded in popularity, becoming a massive success for streaming service NetflixOriginally started as a disc-by-mail service, Netflix has grown to be one of the largest media companies in the world (and one of the most valued internet companies as well). With a constant slate of new internet streaming-based programming that updates all the time, Netflix has redefined what it means to watch TV and films (as well as how to do it).. Many have noted that Netflix absolutely loves to cancel series almost as soon as they're done airing their first season, cutting everything that doesn't become a cultural phenomenon. The Witcher defied that, almost instantly getting green-lit for a second season, and plans were put in place to capitalize on that success: a behind the scenes show about the making of he series, an anime prequel, and live action series prequel as well. The making of came out soon after the show found success (but I hate documentaries so I'm never going to watch it) and now we have the next part of that massive franchise: the anime film The Witcher: Nightmare of the Wolf. Fans of the TV show, though, should be warned: while this film isn't bad it doesn't hold a candle to the thrills of the main series.

The film introduces us to Vesemir (voiced by Theo James as an adult, David Errigo, Jr. as a child), the Witcher that would eventually go on to be Geralt's trainer and mentor. Here we have an origin story for this hero and, unlike the stoic and perpetually grumpy Geralt, Vesemir is a talkative, lively fellow. This is a man living at the peak of Witcher power, enjoying the benefits of the life while ignoring the rumblings from the populace that the Witchers are "a scam, a con perpetrated on the poor and needy." Witchers come into a region and kill the monsters, but what if the Witchers were responsible for the monsters or, worse, there were no monsters at all. All they had is the word of a Witcher and could those "monsters" (we're talking about the Witchers now) really be trusted.

Most of these nasty rumors come from mage Tetra (Laura Pulver) and her cult of followers. They preach the negative word against the Witchers and work on the local king to not only banish the Witchers but also attack their stronghold and kill them all off. Fate, though, would seem to be on the side of the Witchers as Vesemir and Tetra are forced to work together to investigate monsters in the local woods that are terrorizing the populace. Vesemir just wants to do his job (and then get back to whoring and drinking) but Tetra is sent along to watch him and verify it's not just a long con. But with an "ally" like Tetra nothing is what it seems and soon the mages and the Witcher could be pitted against each other for the safety of the kingdom... and more.

When we meet Geralt in the TV series it at a time, and in a region, where Witcher are distrusted, even hated. Going back to Vesemir we see a different era, one where the Witchers are local heroes. That makes this film not only an origin story for Vesemir (as we see not only his time as a Witcher but also his own back-story for how he got there) but also an explanation for why the Witchers fell from grace. All that being sad, this film is a bit of a hard sell, at least to fans of the TV show, as little of what is seen here really seems to have much bearing on the show. 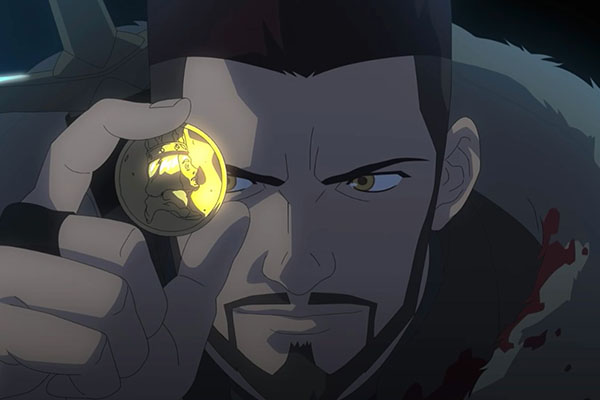 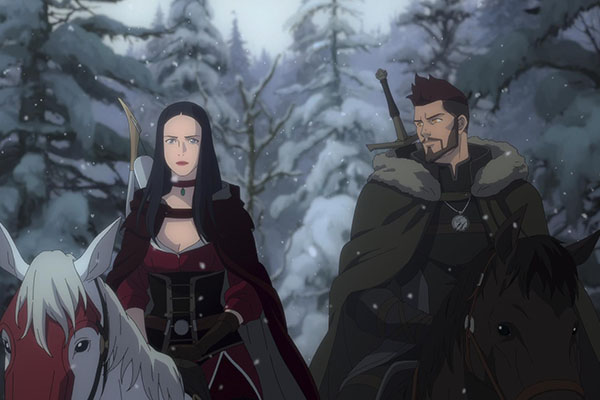 For starters, we don't know Vesemir (not yet as he won't show up until season two). While the character is voiced and portrayed with a ton of charisma, striking quite the dashing figure, this is still a story about a guy that so far doesn't have much bearing on the plot of the main series, dealing with events far enough in the past that they, too, don't really affect where we are in the main story. Anyone wanting to know why Witchers are distrusted could have simply seen how they reacted to the least charismatic man in the world, Geralt, and gotten an inkling that maybe Witchers aren't well liked, and that would have been enough. Getting the details, as of right now, don't really seem to do much. Yes, there's more reason for the people to hate the Witchers (as is revealed in the twists of this film), but as far as giving us a necessary understanding, the film fails on that front.

The rest of the cast of characters (save for a cameo at the end) also don't really show up again in the main show. That's largely because they all die so anyone you might get attached to here isn't long for this world (and won't be showing up in the rest of the franchise). Yes, Vesemir is the exception, eventually, but everything else here feels very far removed that you have trouble caring about the what, why, or when of any of it. The film needed a deeper connection to the lore we know, especially for those of us that have only seen the show; expecting us to care because Vesemir is in the books, or the games, or whatever fails to understand a chunk of the audience or what they need from the show.

But even if you do know the books and the games I have a feeling there would still be at least one piece of the puzzle that wouldn't work no matter what: Tetra. Vesemir in this film does arguably go on a character arc, starting off as an uncaring (but jovial) sot before finding he had to get involved in politics and business and saving the world. Tetra should be our counterpoint to Vesemir, a grounds character that has good reason to distrust the Witchers but who, during the course of their arc, maybe gains some kind of understanding of them. She can still stand opposed to them but growth needs to happen for this character for us to care about her. 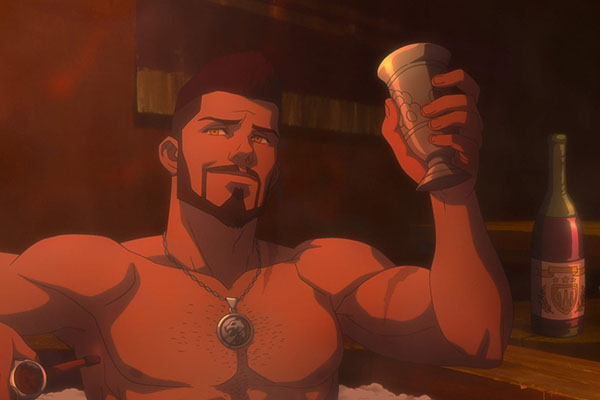 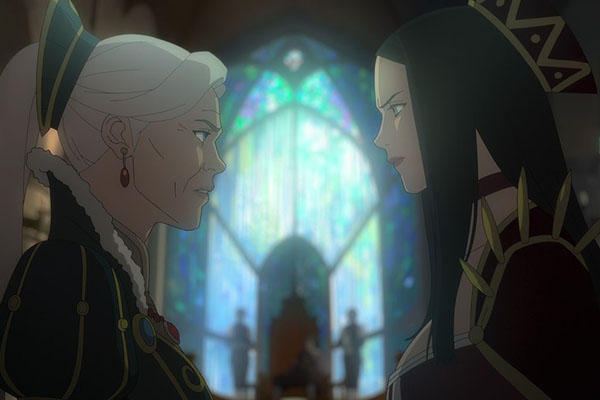 Thing is, if we had a villain that could equal Vesemir in style and substance then we'd have an actual dialogue of story. Vesemir, for all his faults and foibles, is a true believer in the Witchers; the only time that ground gets shaken is by the actions of the Witchers themselves, not by anything Tetra does. Tetra's arc needs to be intertwined with Vesemir; by pairing the two of them up they need to be forced to confront what each of them thinks they know and that never happens. Vesemir has his own moment of doubt but Tetra never changes, not once. She's flat and hollow.

There are things to like in the film as it's a stylish and well animated movie. Netflix is beginning to develop their own "house style" for these projects, as evidenced by Castlevania, Pacific Rim, and Blood of Zeus, to the point that when you hear the terms "Netflix Anime" you can guess what will be in it: stylish fighting, lots of gore, and maybe a bit of nudity. On that front, and garnering it's hard TV-MA, Nightmare of the Wolf doesn't disappoint. This is all the style and flair you'd expect at this point.

But when it comes to the story, The Witcher: Nightmare of the Wolf fails to bring the goods. It's a surprising stumble for a spin-off of a series that was so tightly plotted and executed. While it's not bad it's nowhere near as good as its parent series and that alone makes it something of a misfire. Fans of the show might find some enjoyment from this anime but its doubtful that this will be the same kind of hit for Netflix as the main series became.