In the Shadow of the Moon

I've noted before that the films NetflixOriginally started as a disc-by-mail service, Netflix has grown to be one of the largest media companies in the world (and one of the most valued internet companies as well). With a constant slate of new internet streaming-based programming that updates all the time, Netflix has redefined what it means to watch TV and films (as well as how to do it). releases tend to be hit or miss, usually leaning towards the misses. I know they've put out a couple of decent films, although looking over the list of what I've reviewed for this site none come to mind which kind of proves my point, really. There are numerous films from the streaming service that I've started and couldn't even finish because, due to ineptitude of one kind or another, the films just aren't able to hook me. Of course, part of the reason is because Netflix often buys films the other studios don't want to release, picking them up for cheap to pad out the content on the streaming app. Quality isn't as important as quantity for the service. 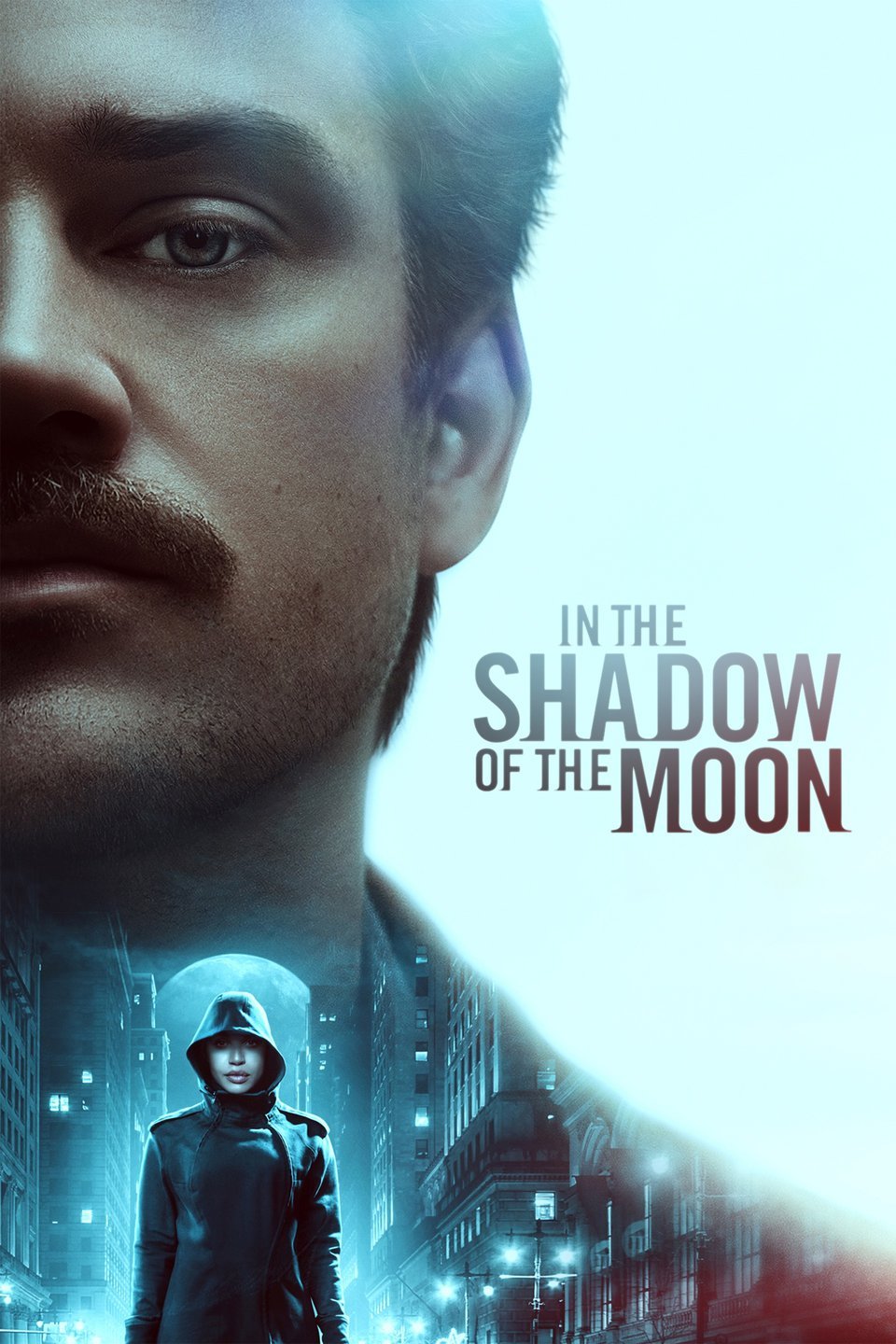 Any time I check in on a Netflix film it's with trepidation over how bad the film could be. Good stories go to Netflix to die, so while the concept of a detective meeting the same serial killer over and over again (throughout the decades as if the killer were traveling through time) is neat, I had to wonder what was wrong with the flick to warrant a release on the streaming service. How did the producers manage to screw up a decent premise with a good hook such that only Netflix was willing to buy it? And that's the thing, In the Shadow of the Moon does have a good premise and a team of people in front of and behind the scenes that clearly wanted to make a good movie. But flaws in the story, and a general low-budget feel, keep the movie from rising to the potential of its concept.

Starting in 1988 (first with a flash-forward to 2024 to show us a city in chaos), we follow Officer Thomas Lockhart (Boyd Holbrook) on a single evening on the beat. He, along with his partner Office Maddox (Bokeem Woodbine), stumble onto a series of murders. In each case, the victim (all seemingly unrelated for over two decades of inquiries) bled out, their internal organs liquefying including their brains. The only clue as to what was happening were three pockmarks on the back of each victim's neck, almost as if they were punctured with a device. The cops manage to get a lead, a rough identity of the killer (a woman, African American, in a blue hoodie, played by Cleopatra Coleman), and tracking through the city they find her. Giving chase, they eventually trap her down in the subway and, after a fight, Lockhart stabs the killer in the leg with her own device, causing her to stumble and fall in front of a speeding train.

And that should have been the end of it, except nine years later the killer appears again, unharmed, as if she didn't fall in front of a train (and as if her dismembered body, cleaned up from the incident, hadn't been sitting in a grave for the last nine years). The killings begin anew, and Lockhart has to track her down once more to stop the killing. And then, nine years later it happens again. And again. Eventually Lockheart develops the idea that while she might have died back in 1988, the killer is actually traveling backwards in time, nine years at a time, to kill all these people. Now he has to try and catch her before in 2015 and stop her from ever going back into 1988 and killing all those people up and down the timeline.

Conceptually I like In the Shadow of the Moon. I like the idea of a serial killer that's traveling back in time such that the entire case against her is a self-fulfilling prophecy, a closed loop timeline that can't be broken. It's interesting in that regard and puts a nice, new spin on the serial killer genre. That said, there are enough issues with how the film approaches the story that it detracts from the finished product. These flaws don't necessarily ruin the whole experience but they do keep the film from reaching true greatness like it should. 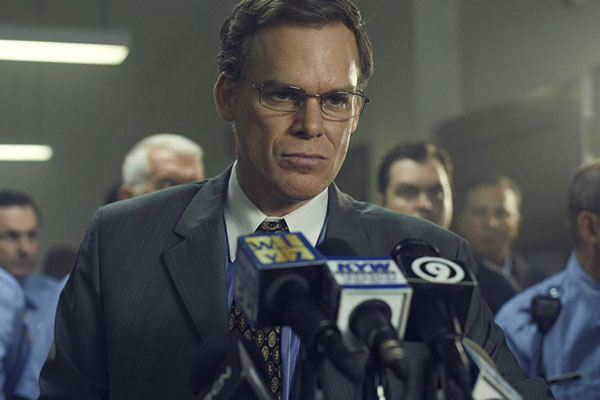 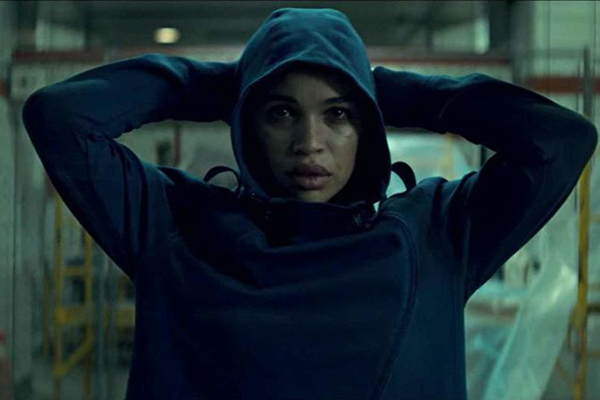 For starters, I hate the fact that the film opens in 2024 for a brief interlude showing us the end of the world. The whole mystery of the film is about who the woman is, why she's killing people, and how she keeps coming back but by showing 2024 as the starting point of the movie we're already thinking in terms of how do we get there and how do we get back. Time travel is the easiest and best solution to fit that opening narrative (Occam's razor, and all that) which means that when the film finally lays its cards on the table and says, "yes, it's been time travel the whole time," we're already up on the solution and it doesn't have the punch it should. If they had simply not shown us the future, or saved it for a late point once the pieces started coming together, that would have helped the film pull off a good twist that we wouldn't have seen coming.

Moreover the film really wants to sell a second, bigger twist (that I won't ruin as, unlike the time travel, this twist isn't built into the trailers for the film as well as the opening sequence that starts the movie) but, due to the way the film is structured, the twist doesn't have the emotional resonance it needs. The twist recontextualizes the killer and, in a way, tries to make us care about her which, potentially, could have worked. Certainly, in the right context it could have also given us a new perspective on Lockhart in the process, and revealed more about both characters with its big reveal. Instead, because it comes so late in the movie, with so little runtime left, the value of the twist is diminished. We're barely given time to process it, or care for that matter, before the film moves on the end the credits. The film needed more to really pull it all together, and better pacing for its sequences, to really sell everything.

Thinking on it, I believe the only way to really fix the movie would have been to have a series of scenes following the killer after we learn about her and her time travels, giving us perspective on each decade in the process as she goes back over the timeline we just witnessed. That could have been cool plus it would have allowed us to connect with her and see her twist play out long enough to have emotional value. Without time following her, the killer remains a cypher, a plot device to be used and thrown at Lockhart but not a real character in her own right.

Plus, really, the time travel science needs to be better explained. The film constantly hand-waves at it, as if to say, "here's an explanation but really, don't think too hard on it." Somehow the time travel is tied to the phases moon, but it only works exactly every nine years, on the exact same day. If you do the math (which I did), that doesn't work at all -- either she's tied to the full moon or the new moon, but neither of those are going to be on the same day every nine years. And if they aren't tied to the phases of the moon, what is the connection to the moon? Why is it even involved at all except because "In the Shadow of the Moon" is a bad-ass title? We don't learn enough to really understand the science, so we just have to accept it as "time magic" and move on, a weak way to handle the Sci-Fi at the center of the movie. 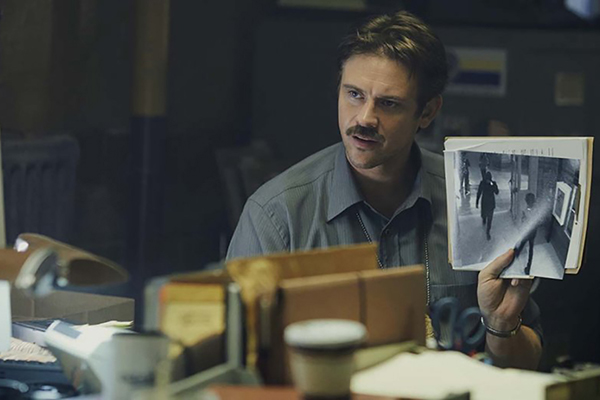 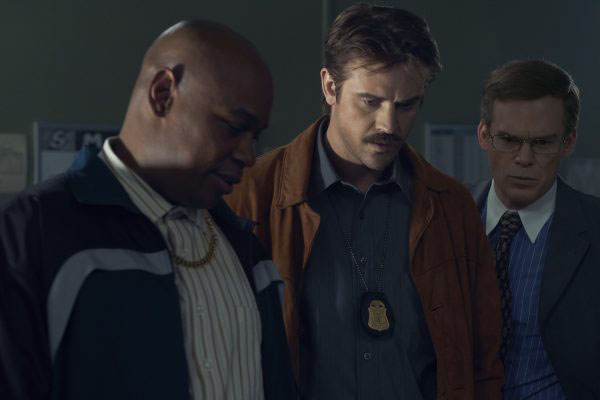 And that annoys me because, at least on Lockhart's side of things, the movie really works. I enjoy his character, seeing him evolve (and fall into ruination) as this case becomes his life. He's well acted by Holbrook, given a smarmy charisma in the early decades and that a hollowed-out determination late in life. Holbrook had to play four versions of his character, essentially, and he does a solid job, especially considering this is basically a one-man show by the end of it, with all the focus on Holbrook. He holds up his end of the film, but the other part, the Sci-Fi part, never materializes to justify its inclusion.

The thing is, due to the way the story is built (and the revelations that come later, not only about the killer but also why she's killing) you can't just remove the Sci-Fi from the film. The movie needs the fantastical elements to sell the story, so I just wish the Sci-Fi was better. As a low-budget serial killer cop drama, In the Shadow of the Moon delivers. But as a pulpy time travel tale the film just can't nail its subject. It almost gets there, then whiffs it in the end.