It's Bad to be Bad 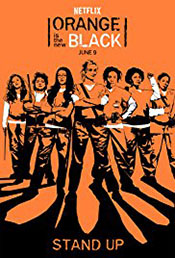 I've been voraciously watching through television this last week or so. I killed the second season of House of Cards, followed i up with the last half-season of Breaking Bad, then killed the first season on Ripper Street (Netflix is my kind of crack). Desperate for my next fix, I started watching Orange is the New Black. I realize I'm late to the "party" since the next season comes out in a couple of months or so on Netflix, but I've just had problems mustering the energy to watch the show (despite good reviews of the first season). And yeah, now that I'm halfway through season one, I'm still having problems caring about the show.

Orange is the New Black is about Piper Somethingorother and her misadventures in prison. Piper ended up in there because an ex-girlfriend (back when Piper was going through a lesbian phase) was the leader of a drug cartel (somehow -- that's one of the dumber plotlines of the show), and Piper helped her, once, cart money internationally for (or from) a drug buy (it could be either way, I'm not sure -- it's not that important). 10 years later, the feds come for Piper because she was named in a Grand Jury case (against the ex-girlfriend), and so Piper plead out the case (instead of risking mandatory minimums in a court case) and got 15 months for her part in the drug deal.

In prison, Piper meets all the other criminals, and befriends a few of them. The rest of the criminals are a diverse cast of money launderers, credit thieves, crazies, murderers, and all the rest. And, I think, that's the biggest issue I have with the show. You're supposed to care about all these characters (who are just there, doing their time) even though most all of them deserve to be in prison. They're the villains, and somehow we're supposed to care about them.

We're supposed to care about Miss Claudette because she defended a girl under her care by killing the asshole that beat the young girl (which, honestly, the murder didn't bother me at all -- he had it coming). This ignores the fact, though, that the girl under Miss Claudette's care was basically a slave. Miss Claudette was running a slave trade, more or less, and the man beat her product. Dress it up however you like, but that's the end result.

We're supposed to care about the young black girl that shows up in prison around the same time as Piper (looking up her name... Daya Diaz) because her mom (who is also in the same prison) is a bitch to her, Daya is sweet on a guard, and in her flashbacks Daya took care of her mom's brood of children. This ignores the fact that she was a drug runner just like her mom, saw how that life condemned her mother to YEARS in prison, and still did it anyway (leaving the brood of youngins with no one to take care of them).

Worst of all, you're supposed to care about Piper because her crime was 10 years ago, and she only did it once. But, as the series goes on, we learn that her ex (Alex) was pretty up front with Piper about the whole "drug cartel" thing. Piper knew, and stayed with Alex for something like five years (I'm halfway into first season and the timeline still seems a little vague). She lived the life with Alex, enjoying the fruits of the drug running. Even if she only did her crime once, she DID IT ONCE. Most of us will never go across Europe with the fruits of a drug operation in our suitcase. it's illegal and we're smarter than that.

In fact, of all the people in the show, I only really care about two characters. One is Piper fiance (played by Jason Biggs), who seems like a stand-up guy (if a little flakey). He's sticking with Piper (so far anyway) despite the fact that she's in prison for 15 months. He's not a criminal, has no criminal past, and just seems like a straight up dude. Good for him.

The other is Red, the prison cook (played by Kate Mulgrew). Red ended up in prison (best as I can tell, because it's all a little vague) after getting fucked over by the Russian mob. She doesn't seem to deserve to be there, but she's making the best of it until her time is up. Good for her.

Everyone else, prisoner or guard, is pretty repulsive and I'd be happy if the lot of them were eaten in a zombie apocalypse (in fact, for me, a crossover of The Walking Dead and Orange is the New Black would redeem both shows).

What's weird is that it's not like I have to empathize with characters on a show to like the show. House of Cards (the U.S. series on Netflix) is a flawed show without a whole lot of depth, and Senator Frank Underwood (Kevin Spacey) is the biggest supervillain ever (I like to think he's Lex Luthor from Superman Returns, put into some kind of supervillain relocation/rehabilitation program who managed to get into politics and is now living out the "Lex as president" plotline from Superman/Batman). You aren't supposed to like Frank (in fact, I think you're supposed to both be reviled by him and revel in his evil at the same time). But House of Cards (like Breaking Bad, really) works as a super-villain origin story/culmination of all his plans. You hate him, but there is no attempt to make you "care" about him.

Orange is the New Black has the issue that you're supposed to bond with all these criminals. They want you to care, but you can't care about the villain. Which is why I can't suggest OitNB and yet I can heartly encourage everyone to watch House of Cards (flaws and all). When you watch Orange, it's hard to divorce yourself from the evil pervasive from the show. With House of Cards, all you have to do is wait long enough and you know it's all going to come down on our villain (and that, most of all, will be the best part of the series).