The Absolute Middle of Heist Mediocrity

As I have noted before, NetflixOriginally started as a disc-by-mail service, Netflix has grown to be one of the largest media companies in the world (and one of the most valued internet companies as well). With a constant slate of new internet streaming-based programming that updates all the time, Netflix has redefined what it means to watch TV and films (as well as how to do it). doesn't have the best track record when it comes to their theatrical film output (with a loose definition of "theatrical"). Although you could probably find a movie or two they've produced that's pretty good, most of the films that come out from the streaming service are far below that bar. Very, very far. This isn't due to a lack of stars or money -- Netflix threw a big chunk of money behind 6 Underground, getting director Michael "Explosions Are My Love Language" Bay and star Ryan Reynolds for the feature, and that ended up as a piece of trash -- it's just that somehow Netflix can't often turn out good films. 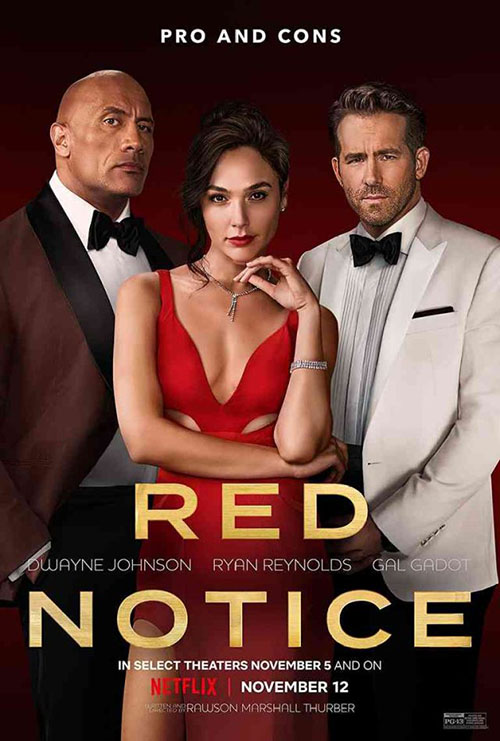 Speaking of Mr. Reynolds, he's back in another Netflix film, this time opposite a cast of stars including Dwayne "Call Me Mr. the Rock" Johnson and Gal Gadot. The whole film was advertised on the trio playing together on screen, with the obvious selling point being, "these three stars are together in one film." While that is legitimate and true, the fact is that the film around these stars is lackluster at best, outright insultingly stupid at worst. This is a film that wants to be a conman heist film for a new generation but it gets so bogged down by, well, everything that it's never able to truly find the fun of it's situation. It's a heist film made to showcase the star power of the leads over anything else, a "hey let's all hang out and make a crime caper" kind of movie, which puts it right in the same field as the original Ocean's 11 and, yes, it's just as bad.

In the film we're introduced to John Hartley (The Dwayne), an FBI agent in Italy to help Interpol agent Urvashi Das (Ritu Arya) in her quest to catch famed thief Nolan Booth (Ryan Reynolds). As we learn in an opening narration, Booth is after one of the eggs of Cleopatra, a golden treasure on display at Museo Nazionale di Castel Sant'Angelo. There are three of these eggs in existence, although only two have been discovered since they were lost to the ages centuries ago. If someone, like Booth, were to get all three eggs they'd have quite the prize on their hands. A prize, it's worth noting, they could sell for a pretty penny as an Egyptian billionaire wants to get the three eggs for his daughter's wedding (his daughter, it should be noted, also named Cleopatra).

Unfortunately for Booth, even after he escapes the museum, and the waiting agents, with the egg they still manage to track him down to his secret island estate and arrest him. Sadly for Agent Hartley, though, another player comes on the scene: the Bishop (Gal Gadot), a thief at (or maybe above) Booth's caliber. She steals the egg out of Interpol's locked van and then frames Hartley for the incident. This puts him and Booth in the same prison, forcing them to work together to escape and find the eggs before the Bishop does so they can capture her and put her away for good (which also would burnish Booths rep as the greatest thief ever). This a twist heist of cat and mouse (presumably) begins.

The problems start pretty early in the film. Right at the beginning, in fact. The movie opens with narration over pictures, showing us the history of the eggs. This is a seriously leaden way to start the film, showing the least amount of imagination about how to get the story going. They could have had us on a museum tour, or they could have dropped us right into the action, having Hartley tell the Interpol agent (and us) the relevant facts about the eggs before we see the caper in action. Instead the film wastes a few minutes at the start on this narration for details about treasures that will the be explained to us, over and over, over the course of the film. 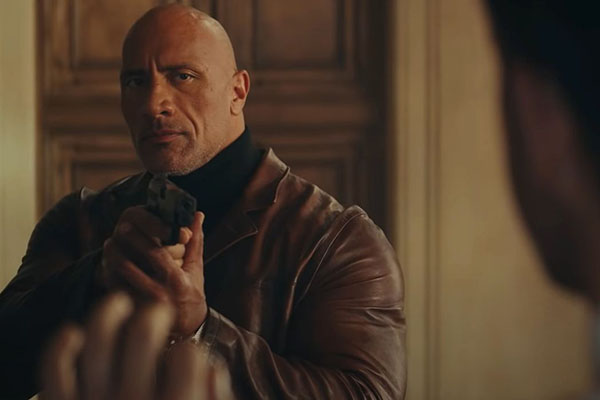 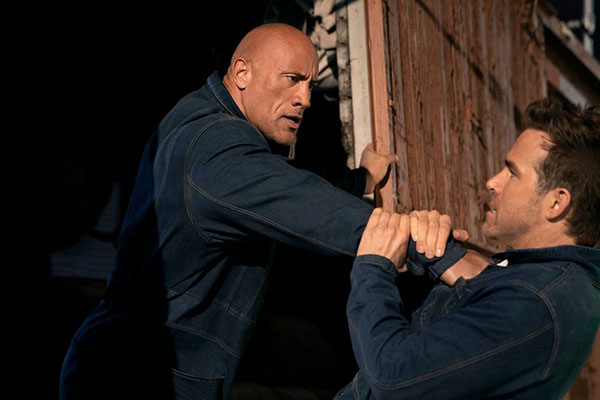 Worse, once we do get into the meat of the film we're introduced to The Rock's Hartley and he's an absolute drag on the film in every respect. The Rock isn't a bad actor when given the right material, having a fair bit of natural charisma. But while he's good at being big, and tough, and funny, he's not so believable as a detail oriented art inspector working for the FBI. There's a certain kind of personality that is interested in that material, that can spout off information about it and make it sound like their passion and the Rock isn't able to do it.

Ryan Reynolds is able to, but his performance has its own, troubling issues. Reynolds in this film isn't play a super thief but, instead, is playing Ryan Reynolds. He's done this in a lot of movies as of late (see: Deadpool, Deadpool 2, The Hitman's Bodyguard) and while it can be enjoyable in the moment you're never able to actual get absorbed by the character. While Reynolds is quipping about popular music, Etsy, and whatever other crap floats into his head as he improvises all his lines, you find yourself sitting completely outside the movie just wishing he'd shut up a little bit so you could get to the heist.

The worst served by the film, though, is Gal Gadot. Like her costars, Gadot can be good in the right parts but playing a venomous, vamping villainess is not in her wheelhouse. Frankly, vamping isn't something she's really good at; she can play sexy, yes, but there's always an aloofness to her performance, a reserve that she just isn't able to shake. If Ryan is too lost in his quipping, Gadot sits so far outside the film that it feels like she isn't engaged at all. It's pretty clear she's trying but it just doesn't work.

Honestly, all three of the stars seems to be working at cross purposes to each other. Reynolds and Rock are paired up but due to the way Reynolds works the Rock seems lost next to him, just giving a basic, glowering stare any time Reynolds goes off script and yammers. Considering most of Reynolds's lines are the actor going off script, yammering, that doesn't give the Rock a lot to do most of the time. He gets to sit there and explain the plot while the action, humor, and everything else happens elsewhere. 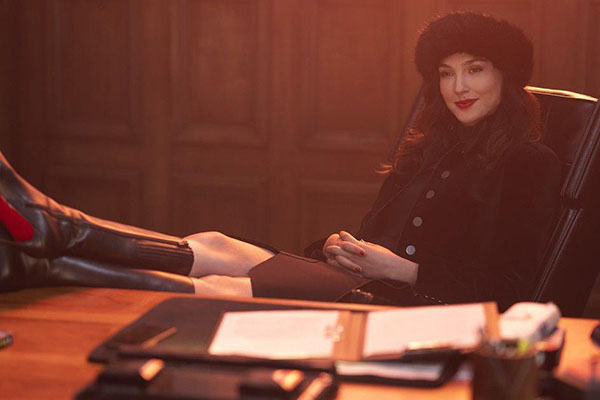 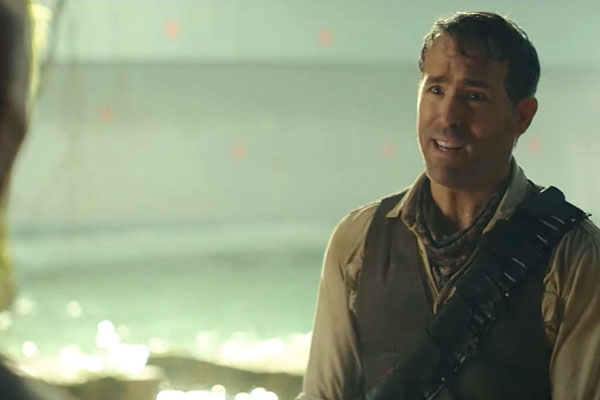 And then there's the twist of the film, because of course there's a twist in a heist film. I won't go into the specifics of it, just because the film is so new, but suffice it to say that the film pours a twist on a twist on a twist, looping around itself so hard that it loses all sense of logic. There are part of the film that set up the twists, and those are fine, but it's the actual broad strokes, the "would this character have actually done this, and if they would have would they have done this other thing as well?" Once you try to think about it all for any length of time it all falls apart.

In the moment the film is tolerable. It's not really well made or well executed. Much of the film is shot against green screens or cheap sets, and the whole thing reeks of desperation, a kind of "let's put on a show" vibe when the people behind the cameras don't really understand how to actually put on a show. There were moments, though, where I found myself actually enjoying Red Notice, where the film, despite itself, actually managed to become something vaguely in the ballpark of engaging. It film never managed to approach good -- this is a bad film through and through -- but it at least was tolerable for a few minutes at a time.

It's hard to think of this film as anything other than a dud, though. There's talent on screen but that talent is wasted. You can tell none of the actors were really engaged with the script or what they were doing (which was why Reynolds decided just to do his own thing instead). Netflix had high hopes to turn this one film into a big franchise starter, with sequels and spin-offs and the whole however many yards. If this film is any indication, though, Netflix should quietly scrap those plans and move the various contracts for the actors onto other projects instead.