In a World of Myths and Magic...

It's not going to be a shocking thing to say at this point, but it's been a long time since I've watched The Simpsons. Like a lot of people that used the watch the show, I was a fan of it during the show's golden area, especially the episodes from season four through season nine. Right around season nine is when I stopped watching it at all (mostly because other things came up in my life), and the few times I went back to catch an episode, the show just didn't seem to be firing on all cylinders. By season 12, most fans tend to agree the show had lost its magic and, still, somehow, the show is still going 17 years later (as it's now heading into its 29th season). 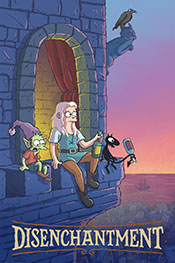 Any show that runs for any length of time is going to have ups and downs, although arguably The Simpsons has been in one long downward slide since around season 9. At that time a lot of the people behind the show left for other projects, including original series creator, Matt Groening. Groening moved on to his second show, Futurama. If The Simpsons was a rebuke of the classic family sitcom, a parody of the very concept of the nuclear family so famous in sitcoms through to the 80s, Futurama was a similar rebuke of sci-fi fiction and all its various tropes. Following the adventures of Philip J. Fry (Billy West), a hapless schmuck accidentally frozen until the year 3000, Futurama played with the conventions of shows like Star Trek, mocking spaceship stories, perfect utopia ideals, and just about ever sci-fi convention the series could.

When it was good, Futurama sung like few other comedies. Sadly the show was cancelled before its time, wrapping up its original run after four seasons (with the fourth, when the staff knew the end was nigh, arguably being its best and most poignant). The show was eventually revived as four direct-to-DVD movies before being picked up by Comedy Central for another three seasons. While the movies and continuation series were never as good as the original run, the show was still great to have back and, even now, is still missed by its fans.

That leads us to the recent release, then, of Groening's newest series, Disenchantment. Kind of a cousin in concept to Futurama, Disenchantment aims to be a parody of the fantasy genre. The main character, "Bean" Tiabeanie Mariabeanie De La Rochambeaux Drunkowitz (Abbi Jacobson), is princess to the Kingdom of Dreamland. She's also a young, drunken lout and a constant shame to her father, King Zog (John DiMaggio). In her various adventures in Dreamland (and the surrounding countryside), Bean is joined by her elf companion, Elfo (Nat Faxon), and her personal demon (set upon her by a curse), Luci (Eric Andre). Together, these three bicker, drink, bicker, do heroic things, and then bicker and drink some more.

In theory, Disenchantment should work. Groening has mined humor from a number of situations and finding the funny in fantasy shouldn't be all that hard. Hell, fantasy writers have been doing that for years, poking fun at the tropes of the genre while lovingly playing in the world. But the fantasy genre is a different beast from sci-fi, and finding funny material isn't always as easy in a genre so heavily trod. Where Futurama had few peers like it, aside from Galaxy Quest and Spaceballs (both of which are pretty hyper-specific parodies), there is plenty of material out there making fun of fantasy. Hell, one of my favorite book series, Discworld by the late Terry Pratchett, is pretty much the de facto parody of the fantasy genre, having long since taken all the piss there is to take out of fantasy. 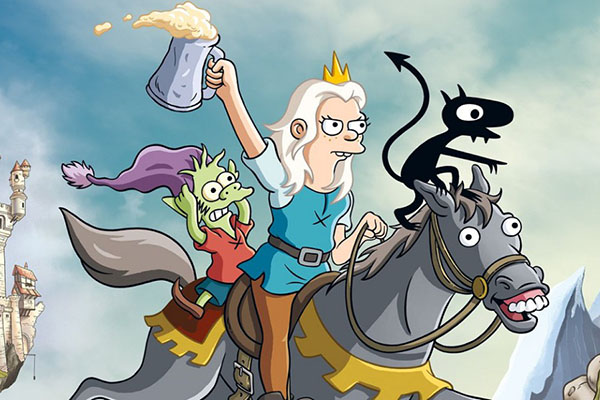 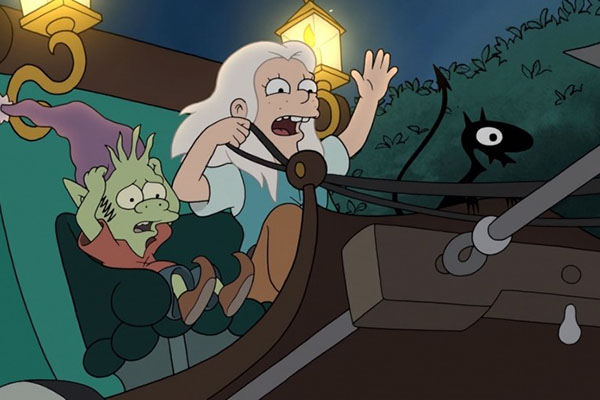 It would take a special series, then, to wade into the fantasy parody genre and come up with something new to say. Unfortunately, Disenchantment isn't that series. It certainly doesn't have anything specific to say about the genre at all (beyond "hey, let's make some contemporary jokes making current trends but set them in a fantasy world, ha ha"). It's not hyper specific to mine material out of any one series (such as taking a stab at parodying Game of Thrones for example), not does it attempt to tell its own story until very late in the run of its very first season (Netflix calls them "parts" instead of season, but we could also use the British term of "series" and it was be as accurate). That's not to say Disenchantment is bad, but it doesn't really have anything specific it's trying to say.

Some of the jokes in the series are quite good. There's a running gag of message birds, but instead of crows (as in GoT) or owls (Harry Potter), it's turkeys, a bird neither known for its speed nor its ability to fly (let alone its intelligence). It's a gag that's made and then never commented on, no matter how often it's used. Gags like this (the chancellor's hidden third eye, the wizard without any magic, the maid with the enormous family) play best when they are done without comment -- the humor is heightened when these things are just accepted as a normal way of life.

The problem is that many of the jokes on the show are immediately commented on. A gag is setup, immediately paid off, and then the characters will often act like "eh, how funny was that?" This underscoring of the humor makes it less funny. A number of good single-use gags in the show occur because they just stack, one on top of another, until you're laughing at the ridiculousness of it before the characters suddenly just move on like it's nothing.

As an example, Bean and her companions get high and start tripping on fungal dust. Bean, coked out of her mind, decides to form a band with the other two, and then, in the span of two minutes, takes them through the entire long career of the band (without ever leaving her room or actually doing anything, mind you). It just stacks, one coked out line after another, until a solid pay-off. And then the characters are in a different scene, doing other things because they're drugged out. It's funny, it's ridiculous, and the show never acts like you're supposed to notice how smart it is. I wish more of the scenes in the show had been like this, would have had the sense to just drag you along for a ridiculous ride without stopping when it expected you to laugh. 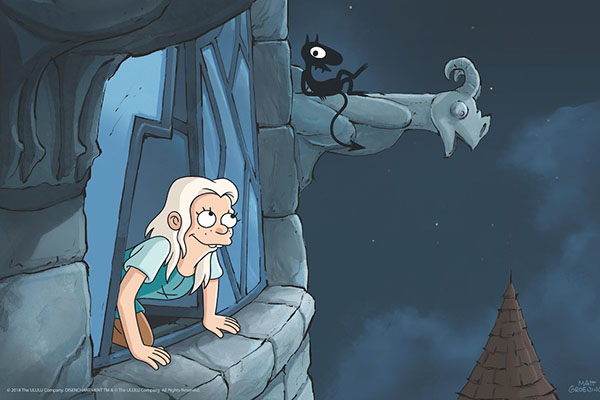 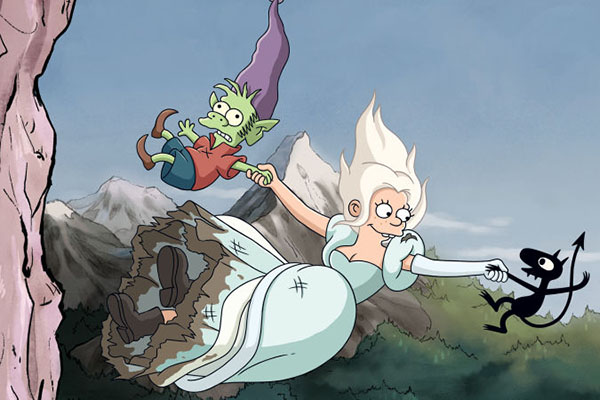 Still, a lot of the basic jokes work. There wasn't a single episode where I didn't laugh a few times. It wasn't laugh-a-minute, but there were a few good chuckles each episode, enough to keep me watching. Plus, the chemistry between the three leads is pretty good. None of them ever rise above their character or gain much depth -- Bean is a drunk, Elfo is naive, and Luci is sarcastically evil -- but the three leads sell their characters and make you enjoy them despite how basic they are.

Many shows have taken their time to get going, and it's easy to see Disenchantment growing from this shaky start to be something better. The episodes showed promise, and the end of the season took steps to blow up the entire concept of the show and expand the range of stories the show was willing to tell. As a pilot season, then, Disenchantment shows solid potential. Hopefully it grows enough by the time the second "part" premieres that it becomes the must watch that both early Simpsons and Futurama were.