Recently the big news from NetflixOriginally started as a disc-by-mail service, Netflix has grown to be one of the largest media companies in the world (and one of the most valued internet companies as well). With a constant slate of new internet streaming-based programming that updates all the time, Netflix has redefined what it means to watch TV and films (as well as how to do it). was the lack of big news surrounding a major release: The Wandering Earth. This film was a success in its home country, China, making almost all of it's money in that one, lucrative market ($693 Mil of it's $700 Mil total global take). Considering that it made that off a budget of $50 Mil, this makes it one of the more successful blockbusters (on the metric of money earned vs. money spent) in quite a while. In short, it could be considered quite the smash. 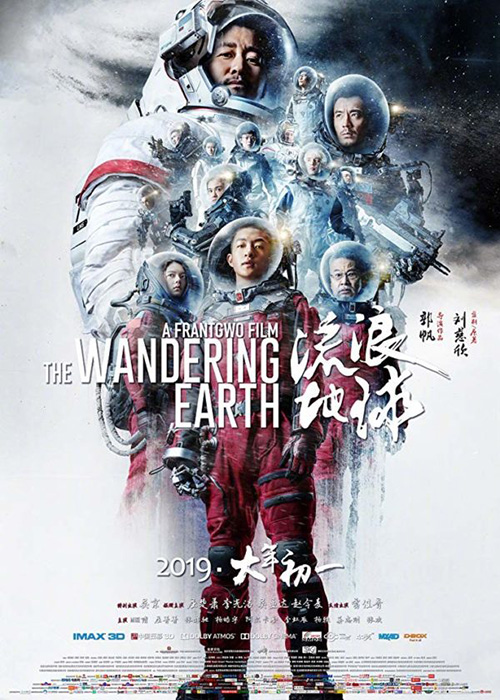 So why did Netflix release it on its streaming network with absolutely no fanfare or advertising at all. Sure, it's a Chinese movie, produced in China and a success almost entirely in that country (making on a thin sliver of it's total take over seas), but a movie that make that much money isn't usually discarded onto the network quietly, as if Netflix was ashamed of it. Any other movie that made that much money during it's release would have been trumpeted, especially considering it's a Netflix exclusive for the foreseeable future. What happened?

The easiest answer is that, honestly, The Wandering Earth just isn't all that good. Honestly, it's pretty awful, and it's not a movie that audiences in the U.S. were likely ever to care about. It's corny and cheesy and dumb, but not in any of the ways that actually rate watching it for all of those reasons. The Wandering Earth is like the 2003 Aaron Eckhart films The Core without any of the humor or guilty pleasure thrills that made the 2003 film enjoyable (in the dumbest, campiest way possible).

In The Wandering Earth we find out that scientists realized they all their estimates about the life of the Sun were off; instead of having millions of more years before the Sun would expand and wipe out the inner solar system, that whole process was going to happen within decades, and at an alarming rate. The only hope to save humanity is to turn the Earth into a giant space-ship, blasting engines out the back to send the orb to an entirely different solar system a couple of thousand years (travel time) away.

Against that backdrop we're introduced to Liu Peiqiang (Wu Jing), a Chinese astronaut who has been living for five years on the guidance space station leading the Earth out of the Sun's orbit. His son, Liu Qi (Qu Chuxiao), and adopted daughter, Han Duoduo (Zhao Jinmai), having been living on the Earth this whole time, and then one day, they steal a pass, sneak out, and go to the surface where they steal a transport vehicle so they can explore. This leads them getting mixed up in the middle of events as Earth passed by Jupiter. It seems Jupiter lets off some kind of gravity spike and instead of flying past the larger planet, Earth gets sucked into it. Now, astronaut and his family from two locations have to find a way to aid the Earth, fix its failing engines, and get it back on mission before all of humanity is lost. 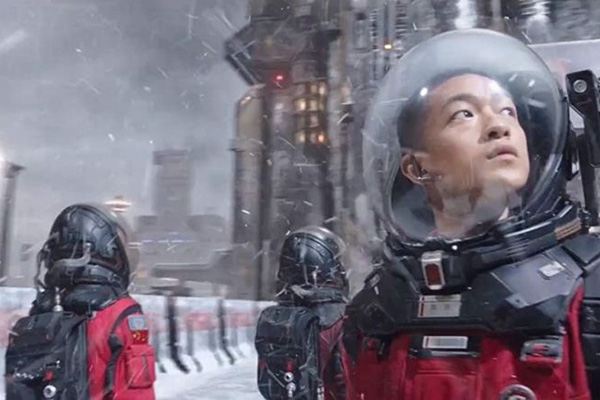 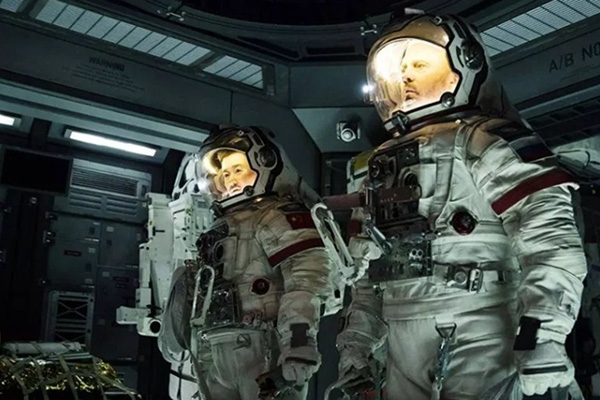 There are a lot of problems I have with The Wandering Earth, but before we get into the junk science of it all (and there is plenty of junk science), let's start with its flaws as a blockbuster movie. To begin with, for a $50 Mil production the film feels surprisingly cheap. The action takes place in only a handful of locations, all of them sound-stages and most of them clearly actors against green screens. Although the film does a decent job of blending the actors into the fake scenery around them, it stumbles whenever it goes to full CGI. These sections look terrible, with CGI that would feel more at home in a direct-to-DVD Starship Troopers film than a ultra-successful theatrical release. Its appearance is, at times, laughably bad.

On top of that the actors in the film just aren't able to give good, convincing performances. I understand this is one of the largest Chinese productions ever made and, sure, maybe the actors just aren't used to having to act against green-screen with all the CGI effects getting added in post. Whatever the reason for it, most of the actors are beyond wooden. Assuming this is because of inexperience (and not just that all Chinese actors are stoic and wooden, an incorrect over-generalization I'm sure), that still doesn't help the film. Knowing the acting is bad for this or that reason doesn't change the fact that it's bad acting. I found it hard to invest in the characters, or what was going on around them, because it all felt so wooden, sterile, and fake.

Even if I had been able to invest in what happened on screen, the movie's flimsy grasp of science would have ruined the experience for me regardless. To begin with, making the Earth into a spaceship and blasting it out of the solar system to another star is a terrible idea. To begin with, setting up engines large enough to actually pull off this feat would probably also cause the atmosphere of the Earth to ignite, blasting the entire surface to the point where it would never be habitable again. Now, fair, the characters in the movie all life underground (or on a space station positioned outside Earth), but once you've blasted the atmosphere like that, you better be committed to living underground for eternity because you're never getting it back. And, if the atmosphere is blasted like that, the engines will also stop working (since they need the oxygen to ignite) and the Earth with be stuck right where it started.

But let's assume the atmosphere doesn't ignite and somehow you do get the Earth moving. You're still going to lose the atmosphere over time as you're blasting the planet at high speeds and it's going to come off the tail of the orb, never to be retrieved. The movie even illustrates this, clearly showing the atmosphere of the planet drifting off as a wispy tail. And, again, once you lose that atmosphere you aren't getting it back. Plus, once it runs out those engines are dead and you're screwed, floating out in space until everyone underground dies. 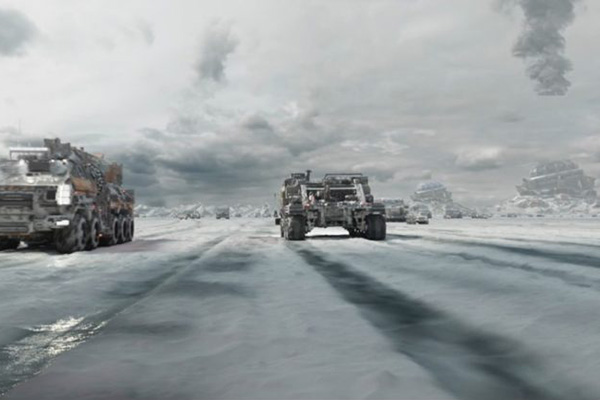 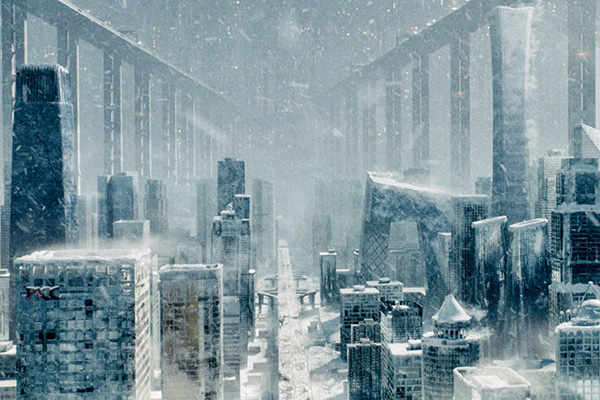 But sure, let's say the planet somehow makes it to the next solar system and, somehow, there's some kind of atmosphere that's still usable. What's the plan? Every plant and animal on the orb is dead (as is already shown in the movie after only five years of progress) and the Earth is a lifeless husk. Can you somehow bring it back from that? Would it even be possible? I doubt that.

Instead of turning the Earth into a spaceship, why not just take this obviously advanced technology and build a century ship up in space. Clearly, if the Earth is gonna get sucked into the sun there's no reason to worry about what resources we use up or what state the planet is left in once we're going. Build a giant ship (which is apparently already possible since they built a giant space station to lead the Earth to its new home), blast out into space without the need to worry about what to do with Earth, and once you get to Alpha Centauri (or whatever) you set up shop on a new planet. Much easier than trying to salvage the now horribly crippled Earth that you dragged all the way here.

The thing is that this plan really doesn't make any sense. The goal is to bring our current home to a star two thousand human years away, that somehow we'll survive underground in an amount of time longer than any single civilization has existed, and somehow we'll keep it all together and be able to make it work? Why do this when a space ship is a better solution, especially considering this movie also shows us that cryo-pods are a thing. Make a century ship, put everyone on it to sleep, and then two thousand years later everyone wakes up in orbit around a new planet without any need to keep all of civilization running during the interim period.

I just can't understand why this movie was such a success. I mean, I can, but not from the perspective of a U.S. movie goer; from that perspective it's a junky, dumb, rather tedious action epic without any sense of fun or humor. However, if we view the film from a Chinese perspective -- this is the biggest movie from that country, the first epic blockbuster China has ever produced -- I can kind of see it. For a nation hungering for these kinds of stories starring their own people, this movie had to seem like a revelation. This is their film and they flocked to it. That doesn't change the fact, though, that this movie is bad and Netflix was right to quietly shuffle it onto the service and ignore it. If only I'd done likewise.