I'm Not Crazy. You're Crazy!

It's been a few days since I finished watching NetflixOriginally started as a disc-by-mail service, Netflix has grown to be one of the largest media companies in the world (and one of the most valued internet companies as well). With a constant slate of new internet streaming-based programming that updates all the time, Netflix has redefined what it means to watch TV and films (as well as how to do it).'s new limited series, Maniac, and I'm still trying to figure out exactly how I feel about the show. There was a lot I really enjoyed about the series, and yet, at the same time, it didn't really leave me satisfied. 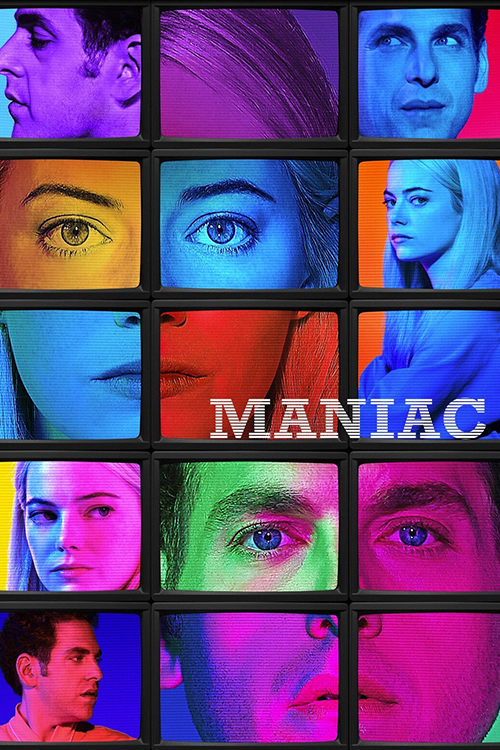 Although there are a lot of different plotlines going on, the main thrust of Maniac is really about two characters: Owen Milgrim (Jonah Hill) and Annie Landsberg (Emma Stone), each of whom are damaged in their own ways. Owen is probably scizophrenic, and while he tries very hard to keep it under control, he still occasionally has visions of a version of one of his brothers (he has four) that doesn't actually exist. He wants to find a way to cure himself but, more importantly for him, he wants to find a way to shake this constant depression he feels and just be happy. Annie, meanwhile, is still grieving over the death of her younger sister. The two were close, but right before she died (in a car accident when the car the two of them were in was sideswiped by a truck) Annie said some rather horrible things to her sister. She wishes she could take it back, but she can't, so she beats up on herself constantly for it.

Enter NPB, a pharmaceutical company testing a new drug/guided visualization method that promises to cure people of their sadness. Both Owen and Annie apply to be in the trial and are accepted (although Annie gets in finally via nefarious means, as is the way of her character), but there are issues with the trial itself. The computer in charge of the guided therapy/visualization sessions has developed it's own personality, it's own emotions, and has become climically depressed. THen one of the doctors in charge of the study dies, his old partner (who was fired from the study) is brought back, and everything starts to spin wildly out of control. Eventually it's hard to tell what's real and what isn't as the visualizations become more connected, more real, and the very neature of reality comes into question.

Well, okay, the very nature of the reality within the series is questioned, sure, but the series never really commits to this idea, and that's the first big issue I had with the series. The series opens with a discussion of reality, connectedness, and makes a pass at questioning the multiverse. This seems to make more sense when we meet Owen who keeps seeing the brother that doesn't exist. Fake brother keeps telling Owen that he's meant for something, that he has to study the patterns of life and follow his mission to save the world. You're meant to question just how fake the brother really is -- is he just a scizophrenic illusion or is he a version of Owen's brother from another reality trying to guide this version of Owen to a greater truth? The series never answer that. It literally raises the question right in front of you and then never commits to an answer one way or the other, leaving you unsure if Owen is crazy or not.

This is a problem because the series really seems to want Owen to be "better" by the end of this adventure, to somehow feel better about his place in the world, but I couldn't help thinking the whole time, "if this dude actually is scizophrenic and, as we see repeatedly, refuses to take his meds to control it, shouldn't he actually be in a hospital for proper treatment? Is a super happy ending actually earned for the character?" If the series would have just committed one way or the other on the nature of Owen's actual reality, I would have felt better about Owen's side of things. 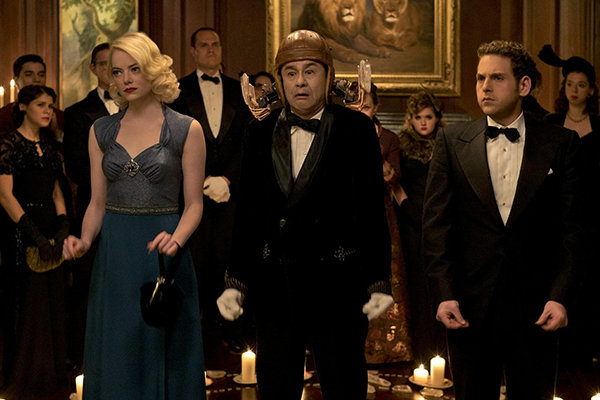 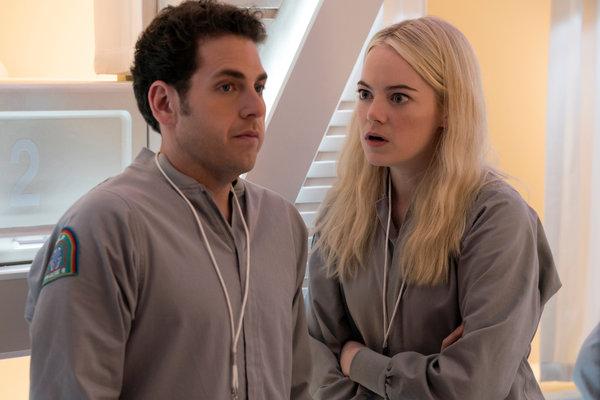 Faring better, for the most part, is Annie. Starting off pretty under-written, the details of Annie's life are dolled out slowly. This would be infuriating if not for Emma Stone's performance. Despite playing a character we start off hating due to her actions, Emma still manages to fill Annie with pathos, cearly showing us the need she has for help even as she does some pretty terrible things to get it. It takes a few episodes to actually like the Annie but because of Stone we automatically care about what's going on with her.

I thin, in a different production, Annie would be considered the manic pixie dream girl, the one that magically shows up one day to make Owen better. Except that Annie is so damaged, and so fully realized as a character, that the dynamic between the two leads feels like an inversion fo the trope. Owen is largely underwritten, with a damaged psyche and a terrible (but rich) family as his defining traits. Because he has a mental illness that's never fully explained in the series (he's diagnosed as a scizophrenic, but is he really one?), his problem comes off more as a short-hand explanation for the way he is. It doesn't get explored in a way to make it meaningful, so he ends up being the "crazy", underwhelming agent of change for the heroine.

It helps that not only do we end up liking Annie but that she gets a full emotional arc. She goes from damaged good to fully realized person slowly on the mend. Her entire arc feels earned, both in the writing and in Stone's performance, essentially making her the true protagonist of the story. Contrast her with Owen who starts off sad, ends the movie sad, and barely changes his position in life if not for Annie. he helps her evolve, and then he joins up with her because, honestly, what else was he going to do?

That said, Owen and Annie are only two versions of the characters we see. They live in what's supposed to be this reality's version of the "real world", which is a distored image of our own. Much of the technology and design feels trapped in the late 1970s/early 1980s, and yet there are flashes of future technology, weird evolutions of social media, things that stand out as "futuristic" in this decidedly retro world. Clearly the production designers were trying for a kind of "ironically retro" aesthetic, and at the start I really dug it. I say "at the start" because, by the way the mini-series pitched itself, I expected there to be an exploration of alternate realities, with the design being a concious desicion to show us one of many of the realities of this world. 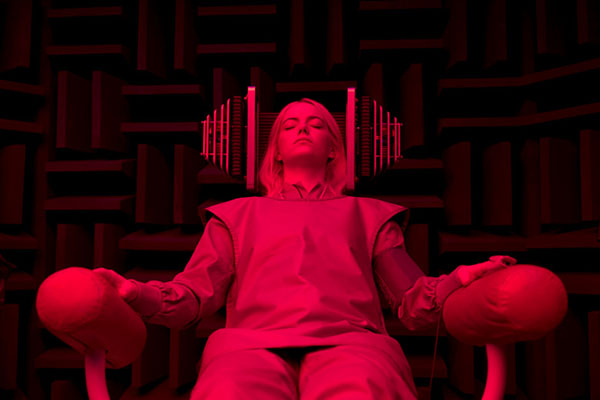 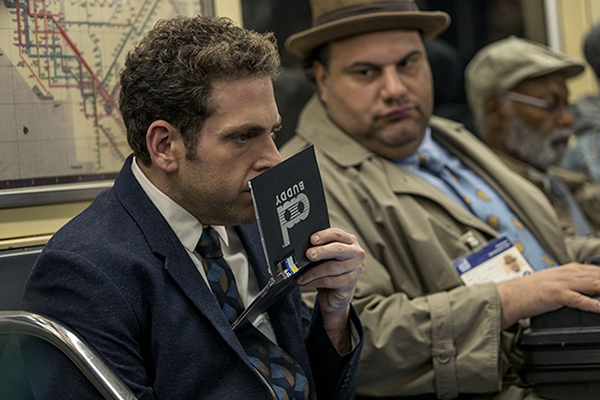 Except, again, the film doesn't really commit to this idea. To elaborate we have to discuss the meat of the middle episodes of the series: Part of the therapy is showing people first memories of their worst day, their worst experiences, via a kind of living VR. This, naturally dredges up feeling about the experience for the patients to work through. The next day they take the second pill and start visualizing various other "realities", fictional versions of themselves and their lives. In one version Owen and Annie are different people, a married couple who work mid-wage jobs and, for some reson, get mixed up in a lemur smuggling plot. Yes, lemurs. And you're led to think it's all fake except then the dream world implies they're actually living the lives of some random couple of 250 years (or so) back. Another time, they're 1920s conmen working a grift at a seance all to steal a mcguffin. Is any part of it real, or was it all just brain fictions?

Who knows, because the mini-series never really elaborates upon it. The series clearly wants to you to think both answers could be true, and if it pushed that idea farther, had the characters bouncing around more, getting lost in the dreams and waking up in different versions of their reality, that kind of weirdness would work. Here, though, it just feels like a freshman-level writing exercise writ large, an idea of, "wouldn't it be cool if we had people explore fictional realities?" without a whole lot of purpose behind it.

I started off really enjoying the series, loving the fact that it implied all kinds of weird directions it could go, strange diversions that would feed back into the main story to make it richer, deeper, and more interesting. Certainly there were narrative diversions, but the feedback loop, the building upon itself to make a greater whole, never happened. It's just creative wheel spinning that tries to disguise itself as a deeper exploration.

There's a lot to like about Maniac from the performances to the design. Unfortunately the story never comes together to give it a solid pay off. It's interesting, and fun at times, but it could have been so much more.