Guess Who's Coming for Daddy

It was just a few months back that NetflixOriginally started as a disc-by-mail service, Netflix has grown to be one of the largest media companies in the world (and one of the most valued internet companies as well). With a constant slate of new internet streaming-based programming that updates all the time, Netflix has redefined what it means to watch TV and films (as well as how to do it). dropped the second half of the fifth season of Lucifer, and I think most of us assumed the wait for the last season of the show would be longer than this. COVID delayed the production, and release, of that second half by almost a year, but then to crank out another 10 episodes so quickly was, well, quite quick indeed. I was expecting to see the last season sometime around Summer next year, and I was frankly a little worried that the quality of this season would dip (after the already lackluster fifth season had shown the serious decline in quality of the series. 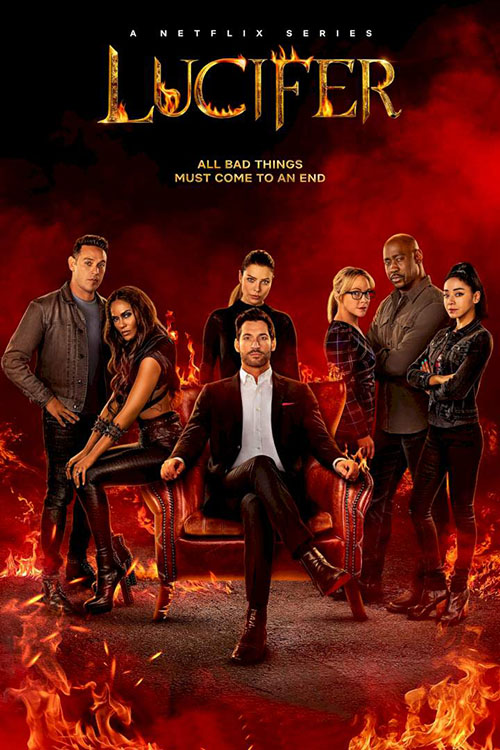 Interestingly, this sixth and final season for the show is quite the improvement over the tedious fifth season. While it still shows some of the weird hallmarks of the late era for Lucifer -- weird musical cues, characters not communicating so the series can create drama when there doesn't need to be any -- it's still a fun and zippy last romp for the character. Change happens, growth happens, and by the end of the season (and the series) the character has finally figured who and what he wants to be. All things considered this is about as good of a last season as could be expected for this show. That's especially impressive when you consider that the producers didn't even expect to make a sixth season at all.

When last we saw Lucifer he's just won the war with his siblings (really, more of a light skirmish in a football field) for the right to become God. Thing is, now that he has the honor to become his high holiness... Lucifer is having doubts that he's ready. He won the external war, if you will, but his own internal strife still remains. So he spends a good portion of this season trying to figure out what it would be mean to be God and what kind of All-Father he really wants to be. And, well, there's a lot of stalling, and sex, and booze, because it is Lucifer.

Things get more complicated when an angel with red, bladed wings -- Rory (Brianna Hildebrand) -- shows up claiming that Lucifer is her father. Oh, and she wants to kill him because, years earlier in her own timeline, Lucifer abandoned her and her mother, Det. Chloe Decker, and she hates him for leaving them behind. One, Lucifer has his doubts about the girl because time travel isn't real, right? But then he also doesn't see how he could just abandon his own child; he would never do that after his father essentially abandoned him. But as the season wears on, Lucifer begins to accept her as his daughter and tried to find a way to fight the fate that's coming his way. Can he defy the odds? Can he be the father she needs? And the father the world needs, too?

The producers for Lucifer stated that their plan all along was for Lucifer to win the war of the angels and become God. That was great on paper but, once they reached that ending, the show just didn't feel like it was done. They had more they wanted to tell for the character and Netflix, thankfully, was interested in producing another season of the show. I'm glad they did because, frankly, the way the show got Lucifer into position to be God didn't feel right for the character. Yes, it felt right for him to want it, and Lucifer was certainly a better choice for the role than his evil twin brother Michael, but the holy crown didn't really seem to fit his head. 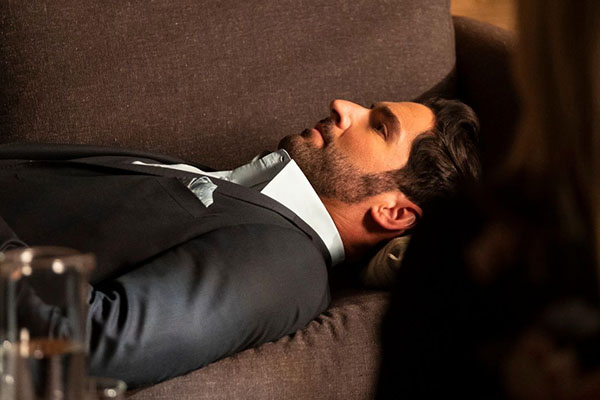 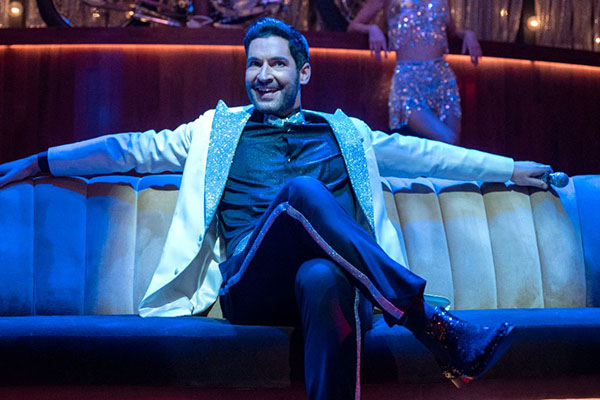 That's really what season six explores: what can Lucifer do to be God and, if the role really doesn't fit him, who could take over the honor and what would Lucifer's place be after that. The solution the show devises, which was hinted at in previous episodes (especially the latter half of last season) is quite elegant and actually fits the character quite well. It is (and spoilers for the rest of this paragraph) that he goes back to Hell not to punish people but to help them break their Hell-loops, in essence helping them to shed their guilt and find their way to Heaven. That feels like a proper extension of the journey he was on, working for the police to make the city safer while also going to therapy to make himself better. Heaven isn't the place for a debauched guy like Lucifer, no matter how fun that might sound; he knows Hell and he can actually help down there.

Now, admittedly (and we're basically past spoilers now), the Hell on the show was never really fleshed out to the point that you understood why Lucifer left. Yes, it's a dark place, and it has demons (who we rarely see and whose roles are vaguely defined beyond "torture"), but most of what goes on down there is people torturing themselves with their own guilt. Anyone can basically create any world of their own imagination and while it seems like everyone, angels and demons, preferred to be on Earth, Hell really didn't seem that bad if you were someone with a creative enough imagination (like Lucifer had).

But then, for that matter, Heaven really never got fleshed out on the show either. What were the angels exact roles in the Silver City? Were the realms of Heaven devised by the good souls that made it there (just like how the bad souls made their own Hell-loops) or was a predefined realm that people just explored? Why would anyone want to go there, especially Lucifer? While I get that the show could just toss around terms like "Heaven" and "Hell", the goals of this season do feel weaker because we've now had two seasons of the celestial beings talking about these places and what needs to happen there but we never really know why or how any of it matters. It's too vague and that makes Lucifer's decision to stall and stall seem less urgent than it could have been.

The show also doesn't really do enough to move all the characters around Lucifer forward. Amenadiel is in training to be a cop (a plot line that started last season) and while that continues along its path here, it also gets dropped halfway into the run and the angel just moves on to other stuff on a dime. Lucifer's therapist, Linda, basically doesn't have any further character growth, simply existing to push other characters (mostly Lucifer) along. Mazikeen and Eve get engaged but that's just them basically holding where they were at from last season. And Chloe, who is supposed to be co-lead with Lucifer, essentially goes backwards, leaving the force at the end of the last season only to immediately decide to go back pretty quickly this season (despite plans for her to be the right hand of Lucifer's God). There's just not enough character growth for anyone outside of Lucifer for it to feel satisfying. 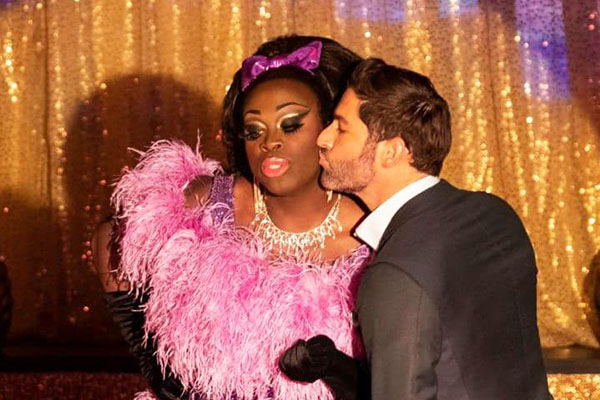 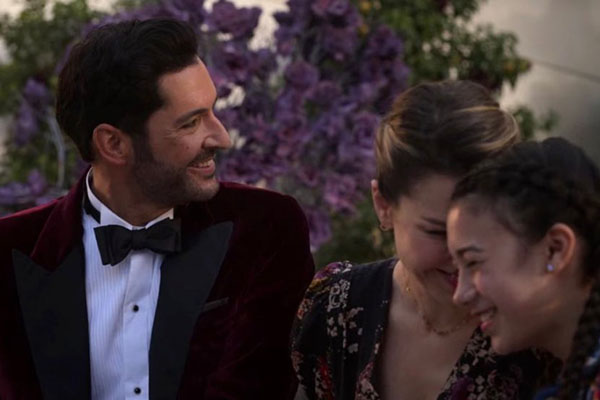 I think the worst served, though, is Rory. Due to the time travel shenanigans, much of her story happens before we even meet her. All we get out of her for most of the season is that she's angry at Lucifer and refuses to talk about it (again, the characters suck at communicating). Her growth all comes in a single, fairly rushed episode, and while it does feel like the place she needs to be at season's end, it's still hardly what I'd call a true character arc. Angry to suddenly not angry because of one act from her father is the show saying, "we have to fix this and we ran out of episodes." It's hardly satisfying.

And yet, the path that Lucifer takes mostly makes up for all this. For all the failings of all the other characters, Lucifer's path to his throne makes sense, is well fleshed out, and feels absolutely satisfying. The last section of the last episode is just about everything I want for Lucifer and it sets him the best possible place he could be without any further episodes needed. It's not a perfect season, and it's very rough in places, but it does end with the lead character finding his proper destination, his calling (such as it is) and it makes him a richer character for it. That is fantastic.

Lucifer has always been an uneven show and, as the seasons went on, that made for a very rocky series in general. While I don't think this season will win over any converts -- we're much too late into the run and the formula of the show is very set at this point -- it will at least satisfy those fans that stuck around this long and just want to know how Lucifer is going to find his final reward. It works on that level and gives fans everything they want. While the series as a whole is a bit rocky, this last season at least gives the show, and its lead character, the send off they deserve.