As anyone that has read through the original run of The Sandman can attest, the series wasn't just one long tale. Instead it was a series of stories and chapters, long and short, that helped to flesh out the concepts, and the world, of the King of Dreams. Many of these stories are interesting on their own but wouldn't necessarily make for good stories within the context of a movie or (important to our purposes) a TV season. Fans of The Sandman would love to see all these tales get adapted, but it's hard to make a case for including all of them within a traditional season. 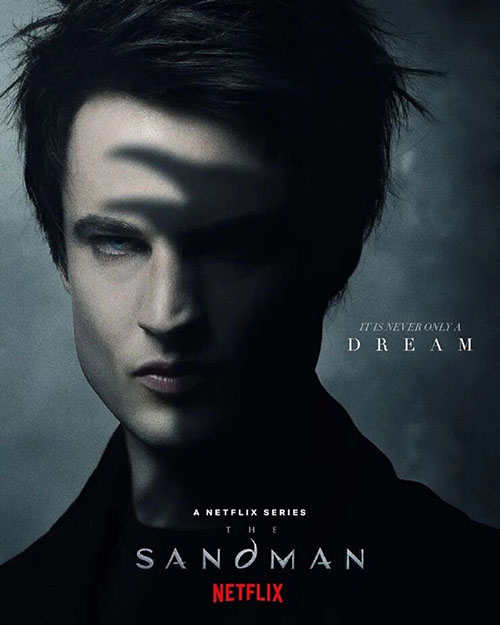 The solution then, at least as far as the NetflixOriginally started as a disc-by-mail service, Netflix has grown to be one of the largest media companies in the world (and one of the most valued internet companies as well). With a constant slate of new internet streaming-based programming that updates all the time, Netflix has redefined what it means to watch TV and films (as well as how to do it). Sandman adaptation is concerned, is to save some of these stories for bonus episodes that can be released after the meat of a main season is published. We got a glimpse of that a couple of weeks after the release of the first season of the show with this bonus episode. Official the eleventh episode of the first season, this two-part tale -- "Dream of a Thousand Cats / Calliope" shows fans how these beloved tales could be brought to the screen. Certainly they don't really fit properly into a larger narrative but they go give us solid, episodic storytelling without the weight of tying to fit these tales into a larger, more epic story.

Dream of a Thousand Cats

The first of the two stories may, for some people, also be the more off-putting (although, in fairness, the material of both episodes isn't exactly "cozy"). This story opens innocently enough with a little tabby kitten (Rosie Day) going on about her life in a big house until, that night, a gray cat (David Gyasi) comes calling. He leads the tabby off to a meeting of cats where they hear from a Great Prophet (Sandra Oh), a Siamese with a rather personal story to tell.

At one point this Siamese was happily owned by humans, living her own life in a grand house. Things changed, though, after she met a tom-cat and, after one encounter, she was left pregnant. She had her litter of kittens, who she loved, but her owner said, "they weren't worth anything" as the Siamese was a pure-bred cat, so he got rid of them (permanently, in a river). This left the Siamese distraught, so she left to find answers in the land of dreams. There, after a long journey, she met the the King of Dreams (in the form of a Black Cat) who told her that if she could get one thousand cats to dream of ruling over humans the way humans ruled over cats, reality would change. All she has to do it get a thousand cats to agree to do anything...

Artistically this story feels very different from the main meat of The Sandman. While the comic series shifted through art styles and got playful with how it told stories, the TV series is a live-action series with a consistent style. Yes, it does supplement the filmed action with a lot of CGI but it all takes place within a defined art style. Due to the nature of this story (and the difficulty in herding cats) this episode is entirely animated in a weird 3D style that almost looks rotoscoped. It takes a little getting used to the style, although once you get into it does look love. It has a painterly quality I appreciated. But it was a bit jarring to adjust. 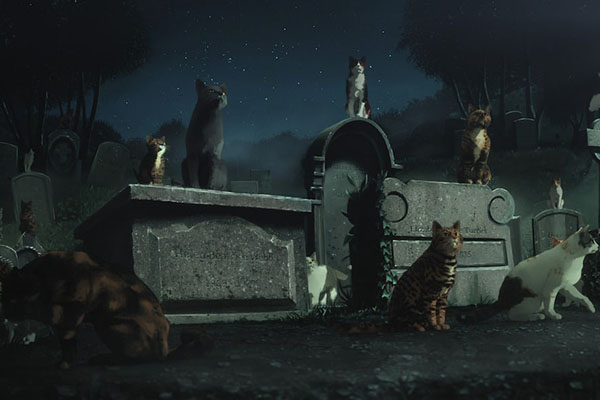 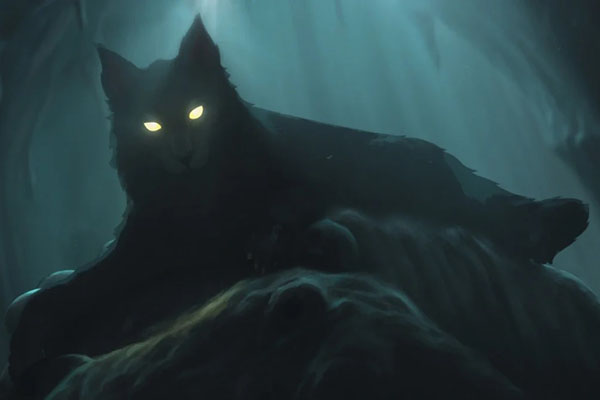 At the same time, this tale does feel like a trifle. More so, it's a very depressing trifle. I've heard (and read stories) of people shutting off the episode when it got to the point where the kittens were drowned. It's a rough bit of storytelling that the episode doesn't shy away from, a credit to the writers respecting the source material. It does put the episode on a bit of an awkward foot, trying to keep people watching while it gets more and more depressing.

The it takes a really weird turn. We see the dream of the cats where they are huge and the humans are tiny, like mice. It's a catly paradise, to be sure, but it feels really off-kilter even to the meat of this story. It leaves the entire tale feeling uneven and strange. In fairness, the voice cast is phenomenal and they make the material work as well as it can, but it's pretty clear why this story was shoved into a bonus episode not linked to the main series (at least at first): it just doesn't really fit well at all.

We then shift back over to live action (which, man, that took a second when I first watched the episode as it was, again, quite jarring) for the story of an author struggling to write. Ricard Madoc (Arthur Darvill) wrote one great novel a couple of years ago but, even since, has failed to produce any more words. Everything he writes he hates so he spends hours staring at his screen, unable to write anything (despite being two years overdue on the contract for his next book). If only he could write something, anything, he'd be an author again.

In comes Erasmus Fry (Derek Jacobi), an eccentric old man who used to be quite the famous novelist (before all of his works eventually went out of print). After Richard gets Erasmus something he wants (a gross object we won't speak of again because the episode doesn't either) the old writer then gives Ric a gift: Calliope. The woman is a muse who should, Erasmus says, inspire Madoc with all the ideas he needs. Only one trick: he can't let her go and he has to force her to give him ideas (because she won't give them freely while she remains captured and bound to the mortal world).

So Ric takes her home and (off screen) rapes her, getting inspired to write a series of novels (one for each awful act he performs over the years). His becomes famous, writing novels with strong female characters (even likening himself as a "feminist writer"), while Calliope sits locked in a room upstairs, waiting for help. That help does arrive, though, after she tricks Ric into summoning Morpheus, and the king of dreams is none to happy to see what's been done to the woman he once madly loved (and still does). So he sets about doling out justice...

Where "Dream of a Thousand Cats" is an odd little trifle that doesn't really feel necessary, "Calliope" has a bit more meat to it. On one front it's a story about a struggling writer, sounding like a release of Gaiman's own struggles, at times, to put pen to paper. Richard suffers severe writer's block, something any writer has felt at one point or another, and "Calliope" allows Gaiman to think through, "what would happen if there was just an easy solution to all this?" The fact that it goes dark very quickly is, of course, something you expect from Gaiman's tales at times. 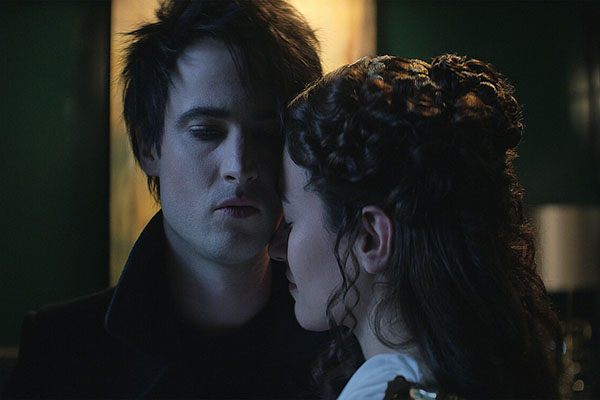 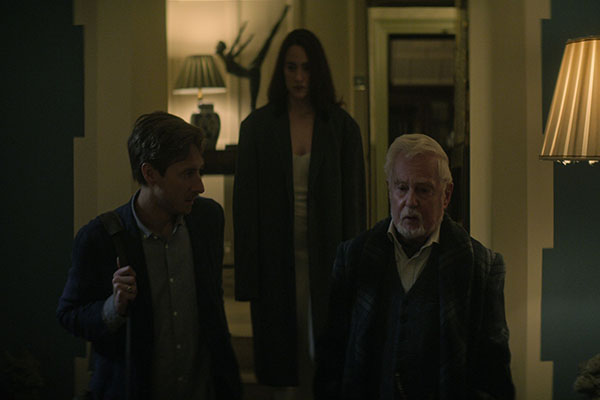 What I also liked, though, was how the story was bent to fit the current world. We've seen plenty of men that likened themselves as "feminist creators" who were then revealed to be absolute shit-heels. Just think of Joss Wheddon for a moment, once hailed as a great feminist for his strong, female characters, but then the stories started coming out about his behind-the-scenes behavior, and you have to go back and watch his works again and you realize, "man, this dude sucks." Madoc is that guy, and we get a first hand account of just how awful he is. He rapes a woman because he can't write and she can inspire him but that's not a good reason to do it.

The comeuppance Madoc gets really doesn't feel all that great, having a fit and then going back to not being able to really write, but the episode seems to feel like, "this is what Calliope wants and that's good enough." I tend to side with Dream, wanting Madoc to suffer more, but the episode lets the character off the hook more than I think is deserved. That's the one part of the story that doesn't sit well with me.

On the whole, though, this is the stronger of the two episodes and, certainly, feels like it could have been stitched anywhere into the main series and it wold have fit. I have no doubt that, should The Sandman get a second season this little thread of Calliope and Dream will be explored further down the road.

That leaves this bonus episode feeling just a tad odd, then. One of its two stories is fairly essential and worth watching but I can't say that about all of this bonus episode. I kind of liked it, but I would hardly call this episode, on its own, essential viewing. It's nice as a bonus, and if it indicates that Netflix is interested in investing further in this series, that's cool. But as the eventual capper to the season (and, who knows, maybe series) this episode promises more than it delivers.