It would be fair to say that Michael Bay has a certain aesthetic. Rising to prominence of movies like Bad Boys, The Rock, and Armageddon, Bay loves nothing more than to create big explosions filmed in his particular, fast-cut, frenetic style. Sometimes his movies can be transcendent, featuring the right mix of explosion and artistry (there's a reason The Rock is in the "Criterion Collection"). Other times, though, Bay will indulge his id, letting his basest instincts take over and the movies become pure, undistilled Bay without any of the artistry to go with it. 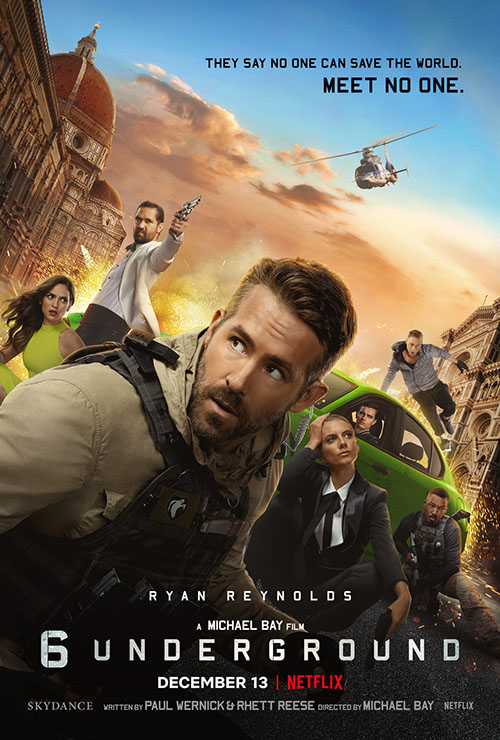 It's not just that Bay has an eye, or that he loves explosions -- both of which are true -- but that he also has other, questionable parts to his aesthetic that don't hold up as well. He loves the look of sexy women, with an eye that lingers on their bodies (tight dresses, tight outfits, or tight tights required, of course). And then there's the politics of his movies, generally gearing towards "Go America! We're Always Right" mentality. If you took a 13 year old to a kegger, got them drunk, talked to them about politics, and then asked them to design a bumper sticker, Michael Bay's worst movies are that bumper sticker, brought to life with multi-million dollar budgets and all the A-list actors he can grab. He's a child playing with his action figures and spouting all kinds of gibberish that he thinks sounds great, but only occasionally does it come together in a decent movie.

6 Underground is not that movie. It is, in fact, one of the messiest Michael Bay movies I've ever seen, his id played out on the screen without anyone or anything controlling it. NetflixOriginally started as a disc-by-mail service, Netflix has grown to be one of the largest media companies in the world (and one of the most valued internet companies as well). With a constant slate of new internet streaming-based programming that updates all the time, Netflix has redefined what it means to watch TV and films (as well as how to do it). clearly leaped at the chance to make a Michael Bay movie and got exactly what they paid for: pure Michael Bay, one hundred percent of the time, without any handlers to say, "hey, Mike, maybe focus this just a little." The best thing that I can say about the movie is that fans of Michael Bay get exactly what they expect from 6 Underground. Unfortunately that's also the worst thing about it.

The team of 6 Underground is lead by One (Ryan Reynolds), an eccentric billionaire fed up with the state of geopolitics today. He sees bad people in high places abusing their citizens and wants to put an end to it, so he puts together an elite team of assassins (Two, played by Melanie Laurent, and Three, played by Manuel Garcia-Rulfo), a parkour expert (Four, Ben Hardy), a doctor (Five, Adria Arjona), a driver (Six, Dave Franco), and a sniper (Seven, who replaces Six early in the film, and played by Corey Hawkins) -- six players in total, hence the name -- so he can use their specialized sets of skills to bring down dictators and topple regimes. It's like if Liam Neeson's character in Taken were split into six people and the doused in Red Bull and Axe Body Spray.

Their target is Rovach Alimov (Lior Raz), a brutal dictator of the country of Turgistan. Having witnessed Alimov's attacks on his people with chemical weapons, One has been plotting the take down of the regime for years. Now, with his team, his plan is to take out Rovach and replace him with his "kinder, nicer" brother, Murat (Peyman Maadi), so that Turgistan can have a proper leader once again, someone that will care for the people in the country. And if he has to cause a revolution to put Murat in power, then so be it. the 6 Underground will win the day by any means necessary. 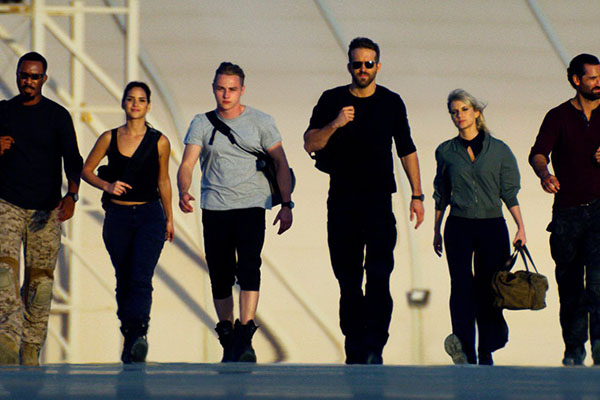 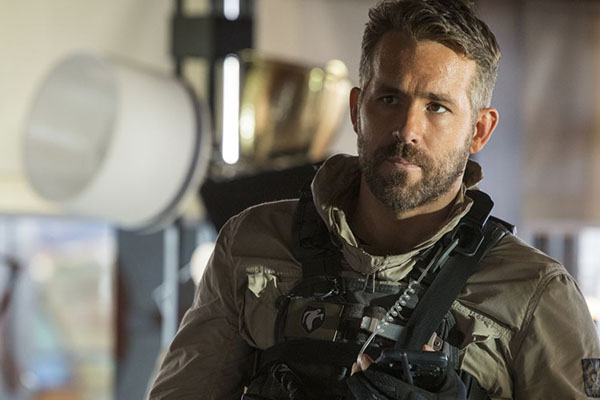 The big issue I have with 6 Underground is the movie's politics. The film has as much of an understanding on geopolitics as a Rambo flick; i.e., there are good guys (the U.S., and her agents like this team of off-the-grid wet-workers), the bad guys (the Soviets in the past, and now third-world dictators), and the good guys have to topple the bad guys so the world can be at peace. The problem with this is that, as history has shown us time and again, you can't make the world more peaceful by toppling regimes as, by and large, the replacement leader is worse than the previous guy. U.S. history is dotted with times where some covert team or another went in, eliminated the leader of a country (often the legally elected, fully-supported leader) so they can be replaced with a regime that seemed more favorable to U.S. interests, only to then watch that regime turn against the U.S. causing the plans to blow up in everyone's faces.

Watching 6 Underground I was struck, time and again, by the fact that no one on the team -- not the billionaire, the trained secret agents, or the military sniper -- had a single clue about the ramifications of what they were doing. Sure, Rovach is a terrible dude who gases his own citizens, but his brother (who we're told has a conscience and is a nicer person) has absolutely no leadership experience and has spent his whole life in exile. What makes anyone on the team think Murat is going to be better than his brother? He talks a good game about the safety of his citizens, but once he's in power, using a government his brother built and all the tools and utilities that are already established, will he remain a good guy? Is it more likely the power will corrupt him as well?

I'm not trying to say there's an easy solution to this. Hell, I doubt you can say there's a "solution" at all. If this fictional country of Turgistan were part of a larger group and, by toppling Rovach the country could merge in and be run by a government that had already proven itself to be wise and kind and good, maybe this would be a good plan. But you're essentially swapping out one supreme leader for another and hoping for the best. That's the big plan of the movie, what the whole film dedicates its entire story to, and I just couldn't get invested in it for one second because it's all so simple and stupid. It's a plan a pre-teen with no concept of geopolitics would devise, which, really, is exactly what we should expect from a Michael Bay movie. Go team?

Being able to invest in the story is a big deal since everything else is going to hang off of it. Without a story I can agree with and care about I then can't invest in the characters. It's a pity because there's a great cast in this film, with Reynolds leading the charge, and I didn't care about any of them. Think about that: Ryan Reynolds is in this movie and his is, without a doubt, one of the most charismatic actors working in Hollywood right now. Say what you will about his shtick, his "don't give a fuck" attitude that he lets seep out into every performance of his, but there's no doubt that he can sell whatever material he's in as if it were nothing. He's generally the best part of whatever movie his in even if the movie is total and complete crap. And yet even he isn't worth watching in this movie; 6 Underground wastes Ryan Reynolds, something I would have thought was impossible up until now. None of his quips land, none of his snark works, and the movie leaves him as much of a void as everyone else in the film. 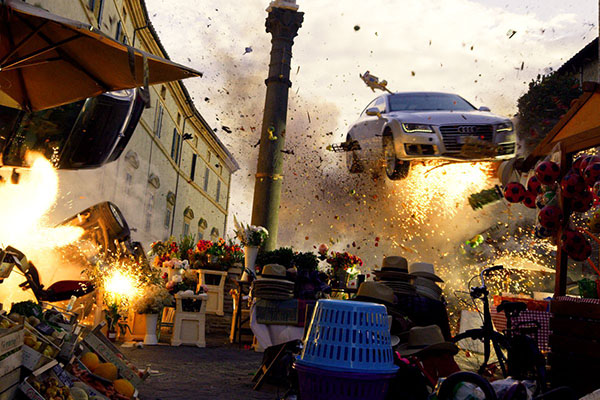 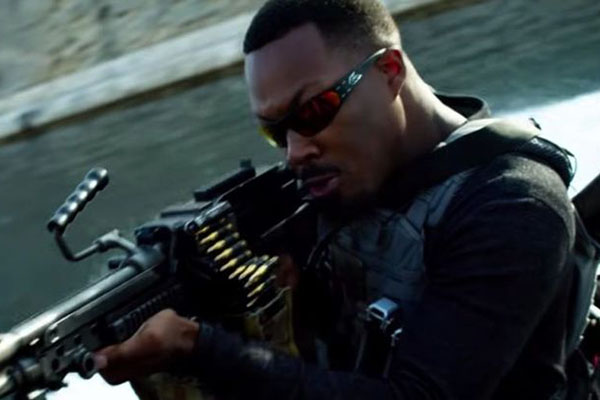 The issue is that instead of investing in the characters, taking the time to get us to know them as they work their big James Bond meets Ocean's Eleven paramilitary heist, the film jumps around, back and forth in history, showing us the atrocities of the regime. It's trying to sell us on the bad of the country, which it does really well, but it never gives us anything we can invest in as a replacement. The 6 Underground team isn't going to stick around and run the country after -- not that we'd want to as everything we're shown about them paints them as wild-eyed zealots -- but the film barely invests in the replacement, Murat. We're told he's a good guy but because of the setup we never really get to see him in action, learn enough about him to actually appreciate that maybe he can do the things the team wants him to do. Hell, his first real act in power is to kill off his brother by throwing him to a rioting mob. How is that good leadership?

Which means, without characters or a story to invest in we have to lean even harder on the action and cinematography. The film doesn't disappoint on this front at least, with a great opening chase sequence filmed with all the panache and style you expect from Bay, followed by a middle-act heist to free Murat and get him ready to lead the a country. These two set pieces are, at times, thrilling; they work when the film lets the action play out, letting us watch the elaborate action and see it all play out across expansive locales. But then the film inter-cuts it with constantly quipping actors laying out bad one-liners and cheesy dialogue and it deflates a lot of the great action. The action is great, stylish and beautiful (as you expect from a director with a film in the "Criterion Collection"), but the characters are vacant, devoid of real personality or substance. It's hard to care if they life or die when you can't like them at all and give a crap about them as people.

The film clearly loves the characters, despite how little it develops them. Only one of the characters ever dies (Six, so early in the film it barely counts as a spoiler) and this is supposed to establish the "stakes" for the movie -- if he can die, so can anyone, right? Then there are multiple points where the film tries to say that the team is going to suffer repercussions; one of the team members keeps in contact with his family even though everyone was supposed to break ties, and there's a paramilitary group chasing down an leads about the 6 Underground. These are interesting plot points that could put the screws to the team... if the film ever bothered to pursue them. But each time these details are raised and then dropped without any follow-up. Maybe the plan is to do a sequel and have these plot threads come back to haunt the characters later, but they're just missed opportunities here.

And, really, I hope this film does poorly enough in whatever metric Netflix uses. Lord knows this movie was bad enough, dumb and hollow and devoid of anything worth caring about, that I don't want to have to suffer through a sequel. When even Ryan Reynolds can't sell the crap on screen you know a movie is shitty. Please, Michael Bay, grow up a little before you make another one of these; 6 Underground allowed you to indulge your worst instincts so, for the love of everything, I hope you got it out of your system and don't ever do this again.