Forever and Ever and Then Some

As I think everyone knows at this point, superheroes are big business right now. Just about every major studio (and any number of minor ones as well) wants to have their own superhero franchise, something they can spin up to make all the money ever just like Marvel/Disney did with the Marvel Cinematic UniverseWhen it first began in 2008 with a little film called Iron Man no one suspected the empire that would follow. Superhero movies in the past, especially those not featuring either Batman or Superman, were usually terrible. And yet, Iron Man would lead to a long series of successful films, launching the most successful cinema brand in history: the Marvel Cinematic Universe.. Most of these projects fail, but every once in a while a new superhero film comes along that actually finds a way to tell a good story in a new way. For NetflixOriginally started as a disc-by-mail service, Netflix has grown to be one of the largest media companies in the world (and one of the most valued internet companies as well). With a constant slate of new internet streaming-based programming that updates all the time, Netflix has redefined what it means to watch TV and films (as well as how to do it). that's The Old Guard, a kick ass action flick that just came out and, frankly, leaves most superhero movies in the dust. 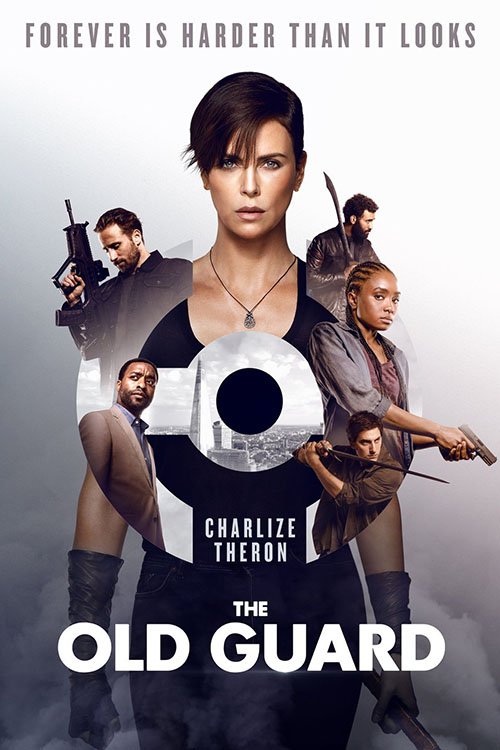 Now, it's hard to know if this film is the start of a superhero franchise -- the tag ending in the credits would seem to indicate it is, and the show is based on a comic of the same name from Image that's been running, sporadically, for the last three years, so in theory the film could have many more sequels to come -- but whatever Netflix's ambitions for this project the company landed a really solid first film here. This movie has everything you'd want -- mythology, deep characters, great action -- to make a solid superhero fantasy.

In the film we're introduced to our band of heroes -- Matthias Schoenaerts as Booker, a French soldier who served under Napoleon; Marwan Kenzari as Joe and Luca Marinelli as Nicky, two warriors from opposite sides of the Crusades who ended up killing each other before coming back, eventually becoming lovers; and Charlize Theron as Andy, the leader of the band and oldest of the group -- as they're heading out on a mission, one that goes south and ends up with the entire band dead in a bunker. Except then they get right back up and kill everyone that tried to kill them. These heroes, if you didn't already know, are immortal with perpetual lives and super-healing abilities, and now they're pissed that someone tried to kill them.

It all traces back to James Copley (Chiwetel Ejiofor), an ex-CIA agent who still "keeps his toes in". Copley gave the immortals their mission, and it seems that he's behind the attacks on our heroes. He's working with Steven Merrick (Harry Melling), the tech-genius who wants to tap into the powers of the immortals so can heal humanity (and make insane amounts of money, too). Things get even more complicated, though, when another immortal is chosen (something that hasn't happened in 200 years): Nile Freeman (KiKi Layne). Andy has to track down Nile, save the girl before the military tries to experiment on her, and get her trained because a war is coming and the immortals are going to have to fight everyone that gets in their way.

Having watched this film just after finishing the first season of Warrior Nun, its interesting to compare and contrast the two. In basic structure this film shares a lot with that show: a new character (Nile here, Ava on Warrior Nun) wakes up after dying to discover they have super powers, and so they have to make a choice about who they want to fight for and what they want to do with their lives. But where Warrior Nun waffled around, taking forever to get to the interesting story, The Old Guard cuts to the meat of it right way. 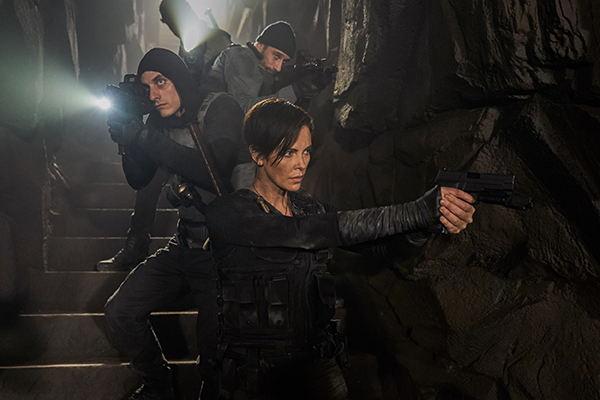 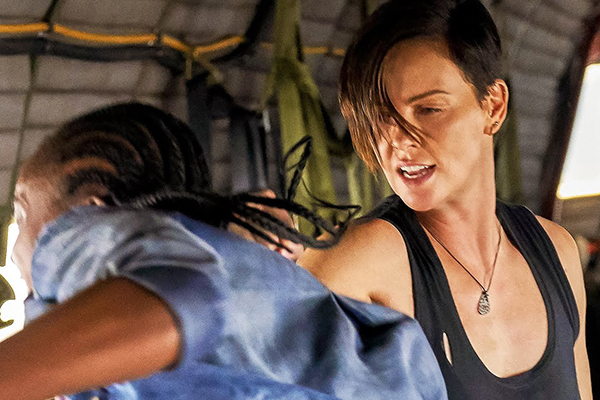 Of course, there's benefit to the format. Since this is a movie, The Old Guard had to get right into the story and could spend a couple of episodes training Nile and getting her up to speed. But then, with the way these characters are setup, the movie really didn't have to do that. Nile is a trained U.S. Marine, ready for action. Her qualms aren't with what she needs to do -- she's already able to handle herself, and she has a sense of duty and the desire to serve -- but whether she can commit to giving up her old life entirely to fight on the side of this new one. That's a deeper choice than "should I be a girl or do I use the powers no one else has to actually save the world?"

It helps that Nile isn't the only immortal. By giving us a team of heroes, the movie can introduce us to their powers right off the bat, get into their story (and their history) quickly, and kick right off into the next phase. We don't have to spend time on a training montage, we don't have to tease out over the course of several hours everything Nile can do. They know, they tell her (and show her), and then we all move on. It's all tightly constructed and well designed to funnel us from start to finish on an enjoyable thrill ride.

Certainly having Charlize Theron anchor the whole show bring the whole movie up a notch. There was a time when I dismissed Theron as an actress, someone who was just there to play the eye candy in films (like (Reindeer Games, 2 Days in the Valley, and The Italian Job), but I should have noticed many of the roles she chose had an edge to them, some bite that showed her ambitions if Hollywood would just give her that chance. She had to take roles in bad action movies, like Aeon Flux and Hancock before she could get to good roles, but once she landed the co-lead of Furiosa in Mad Max: Fury Road, it was clear we had an action star here.

Since then, Theron has managed to land other great action roles -- the best being her turn as Lorraine Broughton in Atomic Blonde -- that showed her versatility and capability as an action star. At this point I'm more excited for a Theron-led action movie than one with Liam Neeson or Jason Statham of Vin Diesel. She knows how to handle herself, and she's willing to do her own stunts, putting her in the same league as Tom Cruise for believable action (although maybe not as suicidally so as Cruise). Here she brings all that intensity, all that action prowess, to make Andi as believable an ancient warrior "goddess" as she could be. It's fantastic. 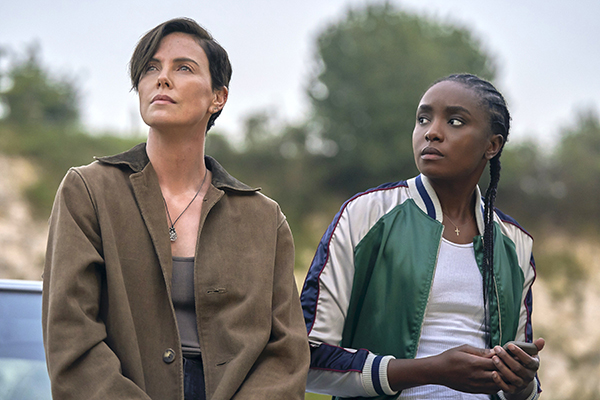 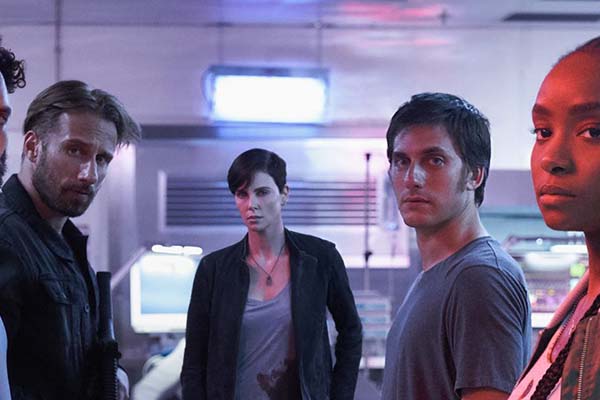 And then, standing against Andy and her bad is Ejiofor's Copley and Harry Melling's Merrick. Normally I'd be wary of a film splitting villain duties between two characters -- normally this just leads to two flatter characters when a single unified force could have carried the film -- but in this instance it works due to the way the story is constructed. Merrick is the more tradition villain of the two, after the power of the immortals for money and power (and he doesn't have a problem murdering and torturing to get the power he craves). While I don't think Melling it outstanding as Merrick, he gets the job done and meets an appropriately satisfying fate.

Copley, though, is the more intriguing of the two, a guy standing against the heroes not because he thinks they're bad -- he actually thinks they've managed to do an amazing amount of good across their long lifespans -- but his wife died months before and he wants to use the healing abilities of the immortals to try and stop anyone else from having to go through that. He's a deep, flawed, and imperfect human, but his motivation is understandable. Plus, he's played to perfection by Ejiofor.

Really, just about everything in this movie is so good. The few sour notes (like Melling's imperfect performance) doesn't do much to ruin the film. This is a great action romp with depth and soul, a thrill ride with an immortal heart. If this film is picked up by Netflix for sequels, I'll be for them -- this is a franchise that deserves to be continued and explored as there are plenty more satisfying stories to tell in this universe.