We've been covering Slasher flicks, off and on, since this site relaunched back in 2018, going through all the classics (and "classics") of the genre, finding the winners and ridiculing the losers. Over that time we've also been able to study the evolution of the genre, from the humble, late 1970's roots where HalloweenThe franchise that both set the standard for Slasher horror and, at the same time, defied every convention it created, Halloween has seen multiple time lines and reboots in its history, but one thing has remained: Michael Myers, the Shape that stalks Haddonfield. ruled the roots, up through the decline of the 1990s when Friday the 13thOne of the most famous Slasher film franchises, the Friday the 13th series saw multiple twists and turn before finally settling on the formula everyone knows and loves: Jason Voorhees killing campers 'round Camp Crystal Lake. and Nightmare on Elm StreetThe brain-child of director Wes Craven, A Nightmare on Elm Street was his answer to the glut of Slasher films that were populating the multiplex. His movie featured an immortal character, Freedy, with a powerset like none other, reshaping the expectations for Slasher movies to come. steadily declined into pale imitations of themselves, and then the rise (and fall) of the "meta" version of the genre with Scream. 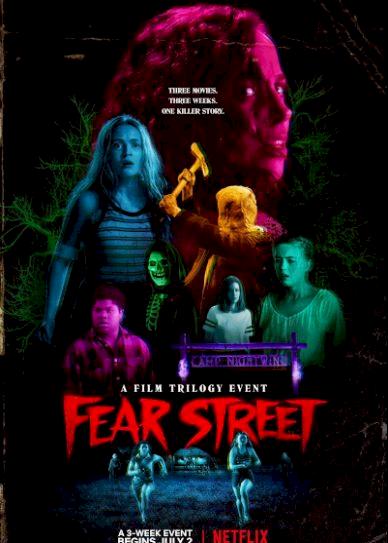 Scream is actually a key movie we need to focus on when discussing the new NetflixOriginally started as a disc-by-mail service, Netflix has grown to be one of the largest media companies in the world (and one of the most valued internet companies as well). With a constant slate of new internet streaming-based programming that updates all the time, Netflix has redefined what it means to watch TV and films (as well as how to do it). Slasher trilogy, Fear Street, as it feels like this film was designed to comment on, and form from, the template set by Scream in much the same way that Wes Craven's 1996 film was designed to comment on the works of the genre that came before. The 1994 setting for this first film in the set, Fear Street, Part 1: 1994, likely is meant to convey just that -- to feel like it's set in the same era as Scream but push the conventions forward in the process. In fairness, though, it's more successful feeling "of a piece" than it is being an actual commentary on the form.

Based on the Fear Street series of novels by R.L. Stine (which, full disclosure, this reviewer has not read), the movie opens with a very Scream-like introduction with a plucky heroine going about her evening, this time at a mall where she works as a clerk. Then a masked man (a skull mask this time, but you get the vibe of what the movie was going for without treading on copyright) comes and stalks her, scaring her as she runs around the mall before, finally, grabbing her and stabbing her. In a twist, though, the killer is then shot by the Sheriff and we're led to think that this whole crime is already done.

Thing is that these kinds of murders happen on the regular here in Shadyside, OH. While sister city Sunnyvale (not Sunnydale from Buffy, although I'm sure the name was no mistake) is a sweet, normal town, Shadyside is a cesspool with murders regularly occurring. Everyone in the town wants to get out, but it's hard to escape the clutches of Shadyside, as our actual heroine, Deena (Kiana Madeira) knows all too well. Her one-time-girlfriend, Sam (Olivia Scott Welch), moved to Sunnyvale and then two haven't talked since. But a chance encounter at a football game for their respective high schools puts them back in touch. Then a car accident suddenly puts a connection between Sam and local legend, the Witch. Now all the killers from past years -- the skeleton man, the ragman from a camp slaughter in 1978, and a scorned woman turned knife-wielding killer from the 1950s -- awaken to stalk Deena, Sam, and their friends. The group will have to find a way to stop these undead killers before they kill Sam and make her another of their horde.

Let's be clear: there's absolutely nothing wrong with this first Fear Street film. It's a very slickly made Slasher with a decent body count (that, admittedly, happens mostly on the periphery) and some fair moments of gore. It's not anywhere near as scary as I might like, but it also doesn't often cop to cheap jump scares or other minor distractions. This is a film that wants to create a solid, well made Slasher without cheaping out or bowing to the lowest common denominator. I respect the work being done here even if I would, personally, like a little more gore and a few more scares that, yes, appeal to the cheap seats. 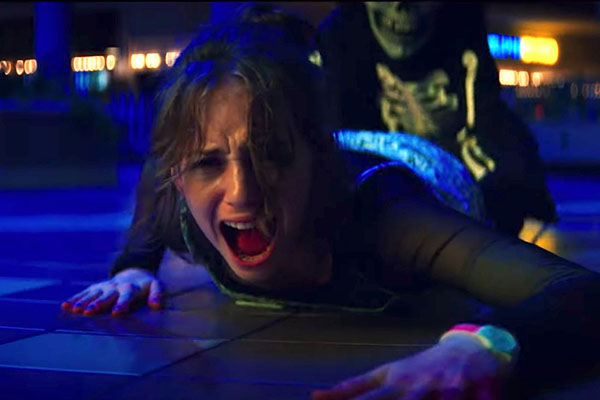 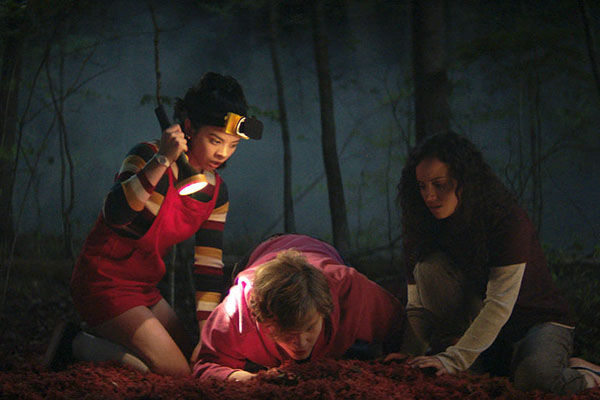 One of the things that works best about this film is that in invests wholly in its characters. The main crew is only five people -- Deena, her brother Josh (Benjamin Flores, Jr.), Sam, and Deena's friends Kate (Julia Rehwald) and Simon (Fred Hechinger) -- and each of them is fleshed out into a fully realized person. These aren't cookie-cutter characters which means you (and the film) care about the and care about what happens as the killers come running. It's a neat piece of work there and shows that the writers knew some of what made for a good Slasher film. You gotta invest so the kills sink in more.

That said, it does feel like the film is a little too invested in the main quintet to the detriment of the kills and Slasher fun. It's pretty obvious that no one from the main group is going to die for most of the film which means that, at least until the climax, you aren't really worried about their fates. You enjoy them as characters but it doesn't really feel like they're in any real danger. And then, when they are actually in danger, it's hard to shake the vibe that they'll be fine. It's a tonal dissonance, worsened by the fact that all the people that die during the grist and meat of the film are peripheral characters and you don't normally see their deaths, just the aftermath. The film needed to balance out its strong characters with actual danger, and a few deaths that meant something, to keep the tension going.

It also does feel very sanitized. Yes, the characters cuss but they do it in a couple of prescribed moments that felt like they could be easily edited out so the film could be run on normal TV. There's nothing here that really feels like it warrants the R rating the film received, at least nothing of consequence. The gore is a little tame (although it is appreciated that it exists at all) and there isn't any nudity (which on its own isn't required but does spike the film and illustrate who is going to be on the kill list next). The film wants to act like a grown-up Slasher but doesn't feel that removed from Stine's other books, the Goosebumps series for pre-teens.

So there are things that certainly do hold the film back. This is coupled with a film that feels more like homage than an original work. As noted the movie recycled versions of Slasher killers from other films, plunking them into a movie that could have easily occurred during the second boom of Slasher films following the release of Scream. About the only original idea the film has it making the two ladies obvious setup to be "final girls" lesbians, a romantic paring not often seen in Slashers (in fact, I'm trying to think of a single Slasher film that has gay or lesbian characters, especially any that could make it to the end of the film). That's not enough originality on its own, but it does count for something. 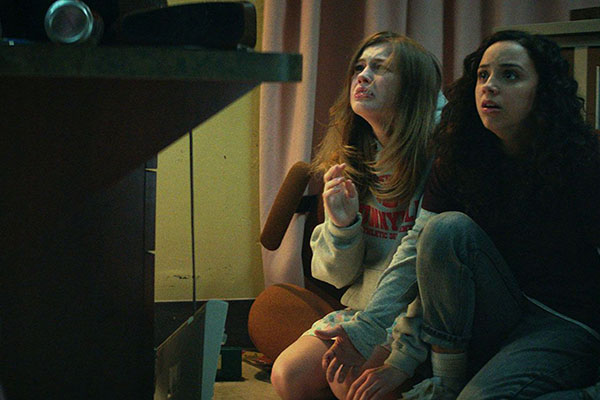 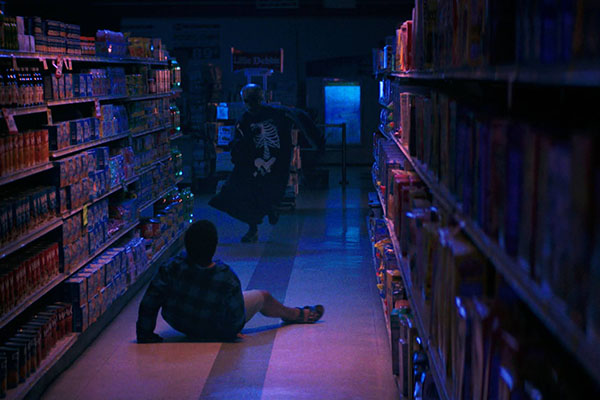 What I ask myself, though, is "how original does a Slasher film need to be?" Every Slasher, in some way or another, can trace its origins back to either the first Halloween (with its down-to-Earth killer) or the original A Nightmare on Elm Street (with its paranormal stalker). Everything since then has been, in some form, a copy or a commentary on those two types of Slashers (and their killers). Fear Street effectively combines both, creating something slightly more in the vein of Cabin in the Woods. And it does work, in that regard, as between the setting and the fleshed out characters, you do feel a certain amount of attachment and investment. It's not original but it is fun.

When the credits came to a close the film promised the next movie a week later (Fear Street, Part 2: 1978) I did find myself excited for what was to come. yeah, it's not a very original looking film either -- a meta commentary on the whole camp killer genre started by Friday the 13th -- but it does once again look like it will have fully realized characters and a fair bit of fun. If you can't be original at least be fun and, in that regard, Fear Street, Part 1 is getting more right than wrong.

Since all three of these are being released back-to-back-to-back I doubt any commentary or reviews for this first part are going to influence the next two movies (what's done is done). It's better, then, to know what you're getting into when you go in for these movies. I enjoyed this film for what it was as I discovered a better than average Slasher in a genre populated by utter refuse. Maybe you'll have the same reaction, or will like it even more (as you don't have to see it with the same critical eye I have). I doubt, though, that'll you leave this first part wholly disappointed.