Iron Chef is one of those shows that feels like it's always just around. Started way back in 1993 in Japan, some iteration of Iron Chef (between Japan, America, and international editions) was on the air for 25 years. That's an impressive run that took it from a goofy show about cooking over-the-top, gourmet dishes and turned it into an institution. For chefs around the world, cooking in Kitchen Stadium was a way to show you "made it". 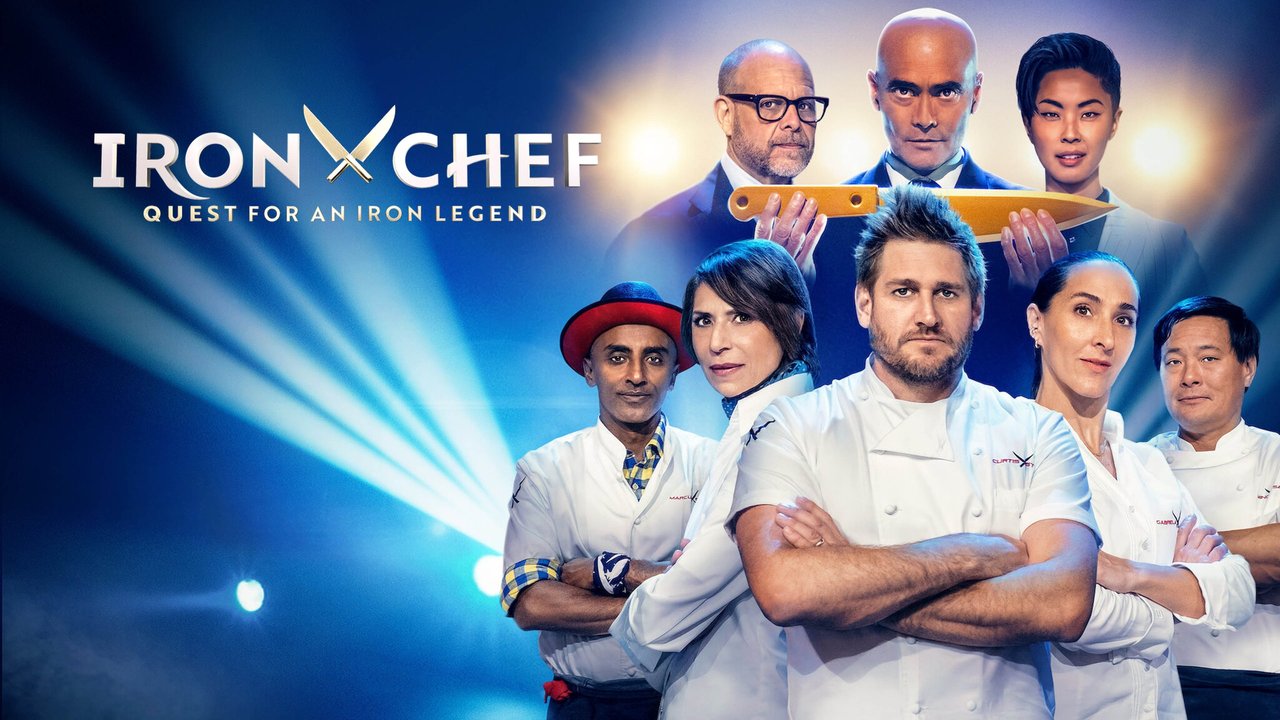 Sadly, after such an impressive run, the show went off the air. Looking for the list of editions, even the international shows ended their runs within the last few years (the most recent, Iron Chef Canada, hasn't produced a new episode since 2019, likely due to COVID). It was time for a revival in some form, although interestingly not on the channel that served as the home for Iron Chef since it was introduced in the U.S., the Food Network. Instead, NetflixOriginally started as a disc-by-mail service, Netflix has grown to be one of the largest media companies in the world (and one of the most valued internet companies as well). With a constant slate of new internet streaming-based programming that updates all the time, Netflix has redefined what it means to watch TV and films (as well as how to do it). slid on into the Chairman's DMs and snatched up the new series: Iron Chef: Quest for an Iron Legend.

If you haven't seen Iron Chef before, in any of its forms, the basics are simple. At the start of each episode a new challenger (a gourmet chef) is brought into Kitchen Stadium (the set where all the cooking for the competition will take place) and they are pit against one of the Chairman's Iron Chefs. The Chairman then reveals the secret ingredient they'll have to cook one, some special food stuff that will have to be incorporated into all their dishes. Each chef, along with their two sous chefs, has to then cook five gourmet dishes in an hour and, after that, a panel of judges will taste and score their dishes. Highest score wins.

Over the years variants of this formula were introduced (mostly by Food Network to goose more ratings out of the brand) and this newest iteration, Quest for an Iron Legend, does make some changes as well. The challengers this time around don't get to choose the Iron Chef they'll be facing, as instead the Chairman (or, really, the producers) have chosen that instead (presumably to get a good fit for the challenger and the ingredients). The secret ingredient is now a mix of ingredients, such as various hot peppers, or various milks, or simple "sea" for all the fish on offer. Sometimes there's a theme, like "kissed by fire" or "Medieval feast" that goes along with. One dish now has to be served around the 20 minute mark, an early sampling that is scored separately from the rest of the meal. And, the biggest change of all, the chefs aren't just competing for simply the honor of being there, they're also fighting for a right to take on all five chefs at once to become the "Iron Legend".

Let's be clear: the whole concept of this show is goofy. The original Iron Chef was, of course, goofy (especially once it was dubbed into English for American audiences), but the American iterations played up that goofiness to a certain level. This show, though, tries to ratchet that goofiness up even further, not only with the Chairman (Mark Dacascos) and his antics, and not only with varied ingredients and odd themes at play. The whole concept of a competition to be an "Iron Legend" is goofy all on its own. It's a meaningless title (just like, let's be honest, "Iron Chef" is a meaningless title), and the whole idea that all these chefs are competing for the right to be this "Iron Legend" and get a golden knife trophy is just absurd. It's camp silliness. 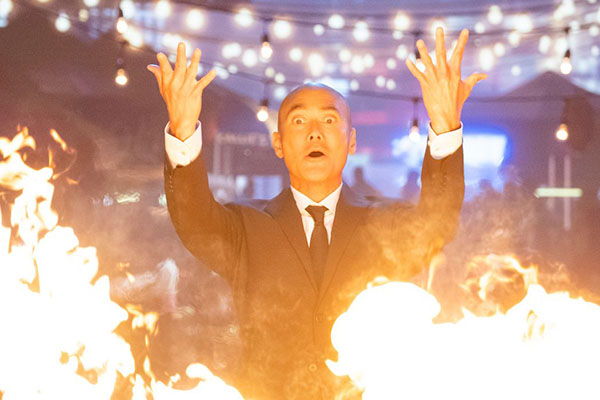 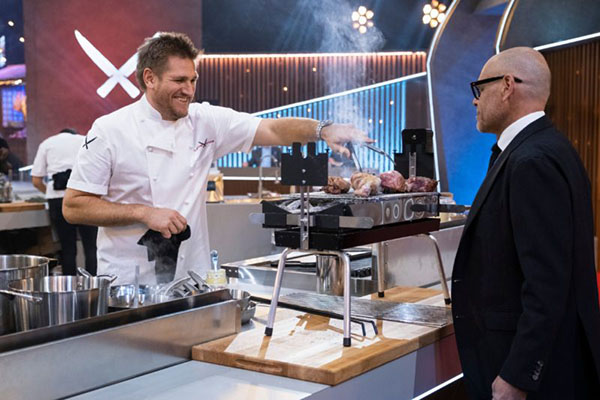 That being said, if you ignore the prize (and title) at the end, the show itself does still work. There's a thrill in seeing two really great chefs go head to head, crafting dishes and cooking their hearts out in an hour's time. The fact they can go from reveal to planning to finished dishes in the length of an episode (even accounting for some magical editing) is impressive and this newest iteration of the show still manages to convey that. The magic of Kitchen Stadium still remains.

I think where the show is really lacking is in its focus. The original shows (both Japan and America) benefited from the simplest of concepts: two chefs, one ingredient, five dishes... go! There wasn't a prize on the line, except the honor of being able to say you bested an Iron Chef, and that only really meant something once the shows had run for a few years and the chefs had built up a reputation for being really, really good. The whole thrill of the experience was simply to show you could work within the format and cook really solid dishes, especially against guys that did this on a weekly basis.

This new version dilutes the simplicity. As an example, having multiple ingredients instead of one means the ingredient doesn't get as much focus. Battle Tailgate has ribs as the secret ingredient, but it's rubs from every kind of animal you can think of, pig and beef and fish and more. With the chefs taking meat off the bones, grinding up ribs, and doing everything they can think of with all that meat, the ribs stopped being ribs and just started being "meat", and the whole essences of the ingredient was lost. That, along with the judges struggling to even define what a "tailgate" meal should be like, meant the concept of the cook was lost. The same thing happened with Battle Street Food, as the judges didn't seem to care if the dishes really were "street food", and again in Battle Farm where the ingredient was milk (of all kinds) and the "farm" concept was basically ignored entirely.

You get the sense the producers realized the whole "concept plus ingredients" shtick wasn't working as the concepts were ditched entirely by the mid point of this short, eight episode run. The ingredients got a bit more focused (chocolate, chili peppers, live sturgeon), and the challenges got more focus. The show really starts to get its feet after Battle Medieval as the producers clearly begin to figure out what worked and what didn't. Assuming this series gets a second season, the lessons learned here should help. 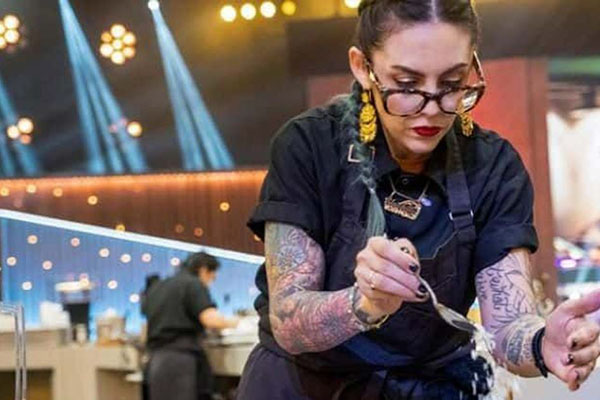 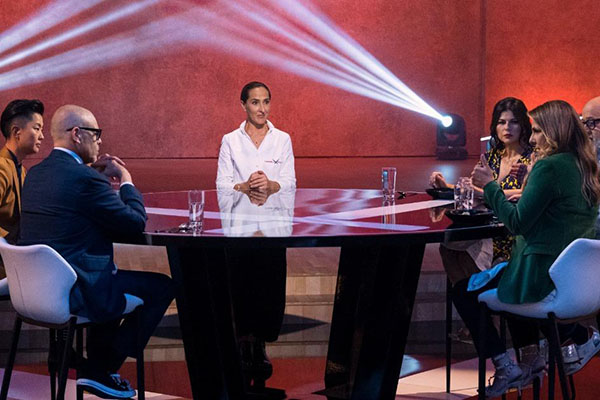 I will say, though, that the show needs to also figure out its chef format. Of the eight episodes in this first season, only five feature that traditional one-on-one cooking format of standard Iron Chef. The other three episodes were a two-on-two battle between the Iron Chefs themselves (which was fun, but totally lacked any stakes), a two-on-one battle between a pair of challengers and Iron Chef Ming Tsai (which seemed imbalanced against the Iron Chef), and then the final battle between the season's winner and all five Iron Chefs. This last episode was the most unfair as the challenger only got two sous chefs but all five Iron Chefs got to work together. The challenge was totally imbalanced, and not in a fun way.

It does all get down to finding balance. The show has a lot of ideas, many of which seem to have been added in a "more is more" approach for the show. More ingredients, more challenges, more challengers! What really works about the show isn't all these weird extras added on, it's the thrill of watching two good chefs go head to head. When we get that, Iron Chef: Quest for an Iron Legend really sings. Everything else about this new production, all the extra fiddly bits, just gets in the way of that pure magic. Hopefully, if Netflix lets this show have a second season, we'll see a more focused version emerge victorious.