A Jazzy Trip Through the Seedy Underbelly of the Solar System

As I've noted before I am not a fan of anime. Plenty of people have tried to get me into that genre (which, like all genres of television, is itself then broken into more and more sub-genres) but, frankly, it's never going to happen. I've watched more than a few anime things for this site, stuff that ties into things I'm already reviewing -- Altered Carbon: Resleeved, Batman: Gotham Knight, The Witcher: Nightmare of the Wolf, and more -- but even when something anime-related is based on a show or movie I'm actually watching I still just can't care. It doesn't do anything for me. 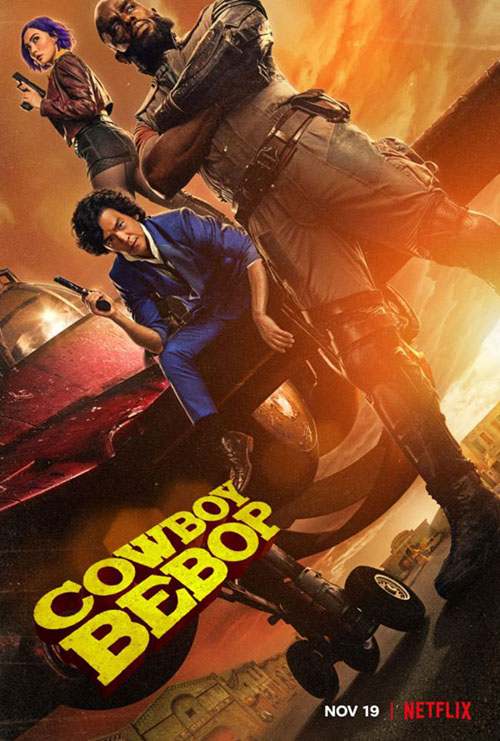 In preparation for the live-action NetflixOriginally started as a disc-by-mail service, Netflix has grown to be one of the largest media companies in the world (and one of the most valued internet companies as well). With a constant slate of new internet streaming-based programming that updates all the time, Netflix has redefined what it means to watch TV and films (as well as how to do it). adaptation of Cowboy Bebop I did decide to try and watch that original anime. It was fine (and I can already hear the fans of the anime screaming at me from behind their keyboards). It didn't thrill me but I could kind of see the appeal. Bounty hunting "cowboys" flying around through space, always on the brink of bankruptcy -- I can see why people would want to watch that story. I did, when it was called Firefly, and I enjoyed it a lot. But in the form that kind of story took with the anime, with the storytelling conventions and the need for the show to stick to a formula, it just didn't work for me. After six episodes (which was six more than I expected to get through), I turned it off.

I mention all this because I want to give fair context to the show for those fans that are going in after loving the anime for years. I've watched both and tried, at the very least, to understand why fans like the original show. The thing about the live-action show is that while it bears a resemblance to the anime, with the characters bearing the same name, the same premise, and some episodes that mirror stories from the original anime, these two are not the same show. Fans of the anime coming in expecting to get what they loved about that show all over again will leave disappointed (as so many reviews Online have clearly illustrated).

That doesn't make this a bad show, though. While it does have it's flaws, the new Cowboy Bebop is a respectable enough show with plenty to like about it. It has its own sensibilities, its own style, and it tried to find its own story to tell without cribbing too much from the original material. As long as you can divorce yourself from the 1998 anime (or just go in fresh, or nearly fresh) you'll probably watch the first ten episodes of this series and leave pleasantly happy with the final product. It's a show that's meant for everyone other than the hardcore fans of the anime (who were never going to be pleased anyway).

The series finds out stalwart crew of bounty hunters aboard the spaceship Bebop-- Jet Black (Mustafa Shakir) and Spike Spiegel (John Cho), and eventually joined by Faye Valentine (Daniella Pineda) -- as they fly the solar system looking to take down the worst criminals as they flee their own eventually imprisonments. Each bounty can be worth quite a boodle (a few million of the solar system's currency, if not more) with the only catch being that the criminals have to be brought in alive. Bruised and bloodied is fine but dead is a no go if bounty hunters (called "cowboys") want to get the fat rewards. 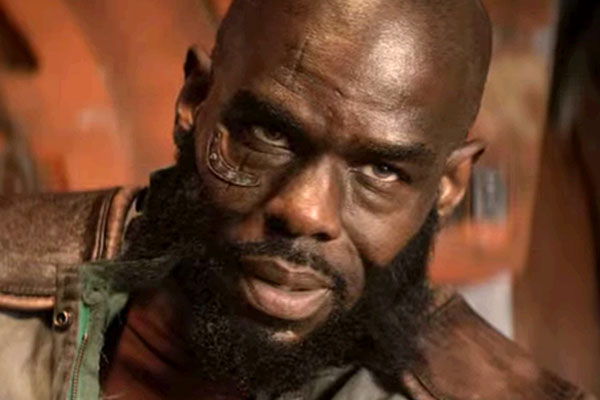 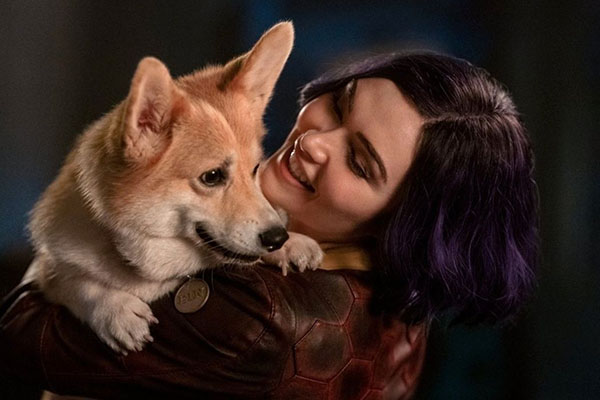 Unfortunately though the Bebop's crew might be good at finding the criminals they tend to have less luck with actually bringing the bad guys in alive (and not causing so much property damage that their rewards are reduced to nil. Worse still is that each of the heroes has their own past that just keeps catching up with them. Jet was framed for a crime he didn't commit and spent five years in prison, losing his job as a cop, his wife, and his daughter and now, all these years later, he's just trying to reconnect with his family. Faye was frozen in cryo-sleep for years, so many years that when she was finally unfrozen she'd lost all memory of who she was, and she just wants to find all that out for herself. But the biggest fly in the ointment is certainly Spike's past (which he keeps from everyone), back when he used to work for the mob as "Fearless", the best hit-man around. Now his old partner, Vicious (Alex Hassell), has found out that Spike is alive and wants his pound of flesh.

For those that have seen the original show there will be a fair bit of culture shock seeing the old stories revamped for this new series. The old show had episodes that clocked in around 24 minutes or so while this new series is easily double that. In cases where old stories are used the show goes out of its way to flesh them out, adding in more with the characters before and after the meat of the adaptation while also changing around a few minor details. This helps to keep the stories fresh if you've already seen the original anime, but I could see how fans might be upset that it's not a more literal one-to-one conversion. Personally I prefer it not being beholden to the original material and the development around the stories added a fair big of needed flesh to the thin show.

The thing about the original anime was that it would lurch forward at times, going from case to case without letting the show around it breath. The times where you'd really want to just hang out with the characters, learn about their past, just get to know who they are now, all of that was missing. The show was focused on the cases, rushing from one to the next and then having the characters fail to make any headway before it was on to the next episode, the next case, and next failed attempt.

The live-action show changes that dynamic, giving us more time with the characters so we get to learn about them. I never really felt like I got a good hold on Spike and Jet in the original series, at least not in the six episodes I watched, and by the time I gave up I still hadn't bonded with them. The only character I really understood was Faye who is such an awful, reprehensible person in her first few episodes that I outright hated her and wished she hadn't even been added. All of that is corrected on the live-action show and, within the first few scenes of the first episode I'd already bonded with the characters and felt like I knew them so much better. That was great. 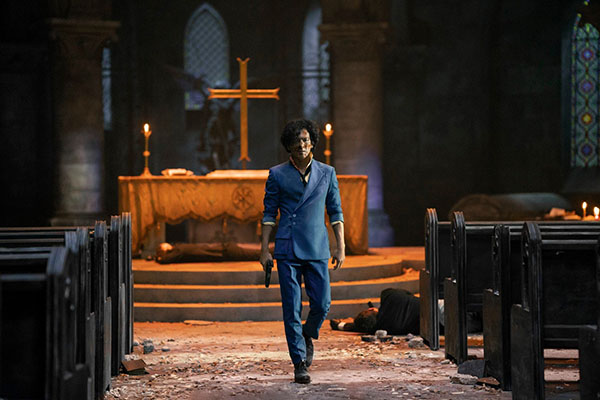 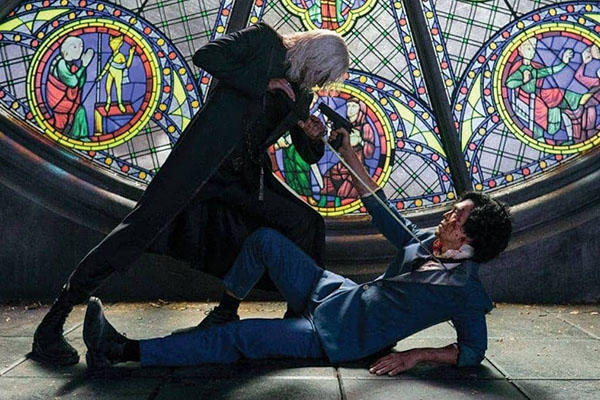 For my money Faye certainly benefits the most with her character being rewritten from a con-woman with a gambling problem into a bounty hunter in her own right. This puts her on equal footing with the guys and makes her more a part of the team than I felt she managed in the run of the anime I watched. I much preferred this version of her and I actually wanted to follow her journey as she worked to get her memory back. Night and day with the anime, in my opinion.

The other major change in the story structure is that the live-action show puts more of Spike's story near the beginning. We get a lot more flashes on his past in the first episode, and there's a running C-plot about Vicious and his wife (and Spike's one-time gal), Julia (Elena Satine). Where most of this story wasn't even revealed until a quarter of the way through the original anime's run, all of this information is packed throughout the first season of the live-action show. That means we get more time with our ostensible villain and we actually get to understand him and view him as a real character. That, too, makes the series more interesting and engaging.

And the actors they cast for the show certainly help. The entire ensemble is great and they all get solid moments that make their characters more engaging. John Cho takes Spike and turns him from the usual anime hero into someone more worn, more frayed around the edges (while hiding a lot of mystery behind his outwardly plucky performance). Mustafa Shakir does great work taking the painfully underwritten (in the anime) Jet Black and adding depth and fun to the role. And Faye goes from a nasty piece of work to someone softer (but still foul-mouthed) in Daniella Pineda's hands. These characters, paired with the performances for Alex Hassell's Vicious and Elena Satine's Julia, means that on both sides of the criminal coin, we have characters that are more nuanced and fleshed out.

As such, I have to admit that I honestly liked the live-action series a lot more than the anime. That feels natural coming from me, but my wife, who actually loved the anime, had the same realization. Once you're willing to sit down and watch the 2021 Cowboy Bebop in its own right you'll find a show that takes what works about the anime and twists everything else around to suit a new storytelling dynamic. While it has some flaws -- a few goofy moments that don't work, some camera angles that feels like they're missing the artistry of the anime -- overall this is a fine improvement on the original that does what it needs to do: it remakes Cowboy Bebop properly for a new era.