After the cancellation of the Original Series after the airing of it's third (and generally considered weakest) season, fans of Trek almost immediately began clamoring for a revival of some kind. While eventually Trek would reemerge in a number of forms, including movies and new series set 100 years after the first, The Next Generation, for a short while a different revival appeared to try and sate fan needs: The Animated Series. 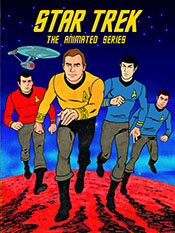 While the new series, which lasted two very short seasons, was Trek's first Emmy-winning show, it wasn't exactly what fans were looking for. The animation wasn't that great and the stories were not as in-depth (due to their shorter, 24 minute run time). The series is, in many ways, the bastard child of the Star Trek universe, to the point where Gene Roddenberry, Trek creator, even asked for it to be ejected from the official continuity of the franchise.

Still, the The Animated Series is Trek, and we're exploring all facets of Trek, so it's time to take a five episode dive into the best the series had to offer. As with my run of The Original Series, I have some ground rules. We'll be checking in on the best five episodes of the run. However, we will not be watching the "Tribble" episode (although in this case I haven't actually seen this one -- we'll probably go back and explore the Tribble appearances in a different article). There isn't a new Mirror Universe episode in this run, so we thankfully won't have to disqualify that, too.

So let's see how good The Animated Series could really be:

While investigating the Guardian of Forever, Kirk and Spock return from a trip back in time only for the rest of the crew of the Enterprise to act as though they've never met Spock before. There's even a different first officer on the ship, an Andorian named Thelin. Soon, it's discovered that Spock, in this timeline, died when he was very young, during a maturity test out in the Vulcan wastes. Spock remembers that, when he was taking his test, his cousin came to his rescue, saving his life. This leads Spock and Kirk to agree that the older Spock must have traveled back in time to save the younger version, and so Spock must do it again (for the first time).

The episode is kind of a spiritual sequel to both "City on the Edge of Forever" and "Journey to Babel", featuring both the unintended effects of time travel as well as more exploration of Vulcan culture. Despite the short length of the episode, it does feel like a lot happens and there are good stakes for the story. I enjoyed the events of the episode, and the minute changes the timeline goes through as Spock is forced to go into his past. 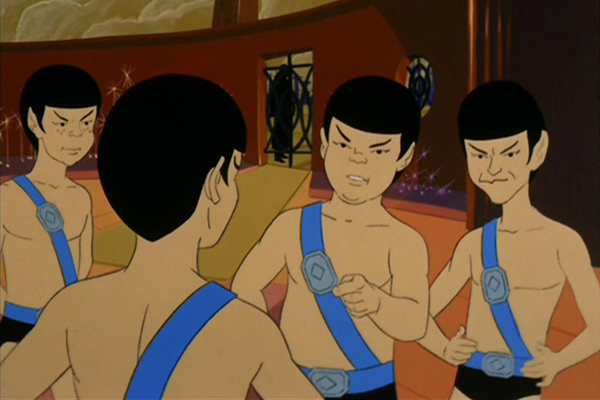 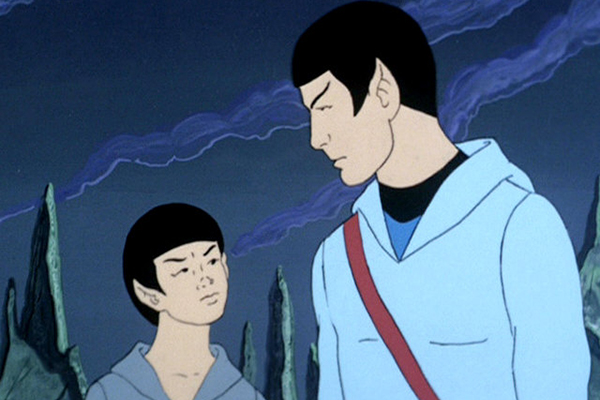 That said, not everything about the episode is great. The Vulcan planet seen in this episode feels less like Star Trek than a cross between He-Man's Eternia and a Dr. Seuss acid trip. Additionally, the voice actor they hired for the child is absolutely obnoxious. As good as the story is, watching Spock bond with himself in the past, the child actor nearly ruins the whole thing.

Under orders to survey a new planet, The Enterprise crew find a mysterious power source on the planet. Sulu discovers a weird little plant, but is soon poisoned by it, putting him near death. This is when a race of humanoid-shaped intelligent plants comes to the aid of the crew. Although the crew thinks the plant-beings are friendly, soon the beings betray the crew, capturing Spock and forcing the rest of the crew off-planet. Kirk and the crew try to puzzle a way to save Spock, but will they be able to get there in time before a mad doctor working with the plants is able to experiment on the Vulcan officer?

Speaking of sequels to previous episodes, "The Infinite Vulcan" is another episode discussing the Eugenics War (like "Space Seed" for TOS). The mad doctor introduced part way into the episode, Dr. Stavos Keniclius, was a scientist that worked during the war before fleeing Earth to find new life, and new experiements, out in the cosmos. For a Saturday morning cartoon this was pretty heady stuff, and I was impressed the show was willing to tackle it. 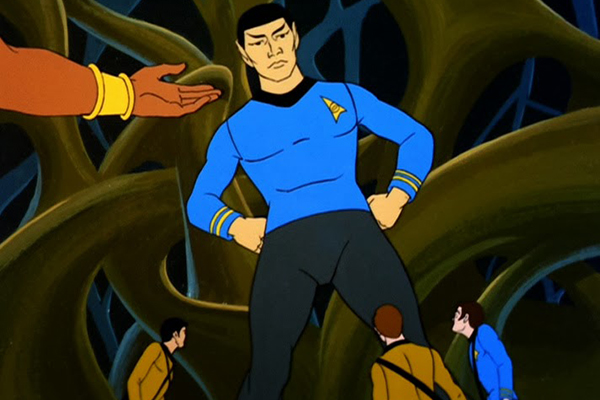 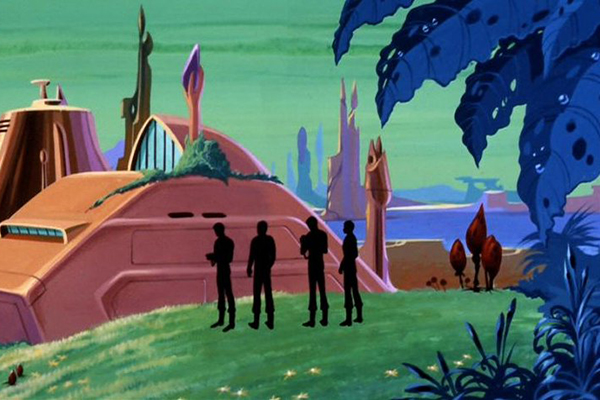 But then the episode takes a goofy turn, introducing a giant-sized Spock clone who... really just stood around and didn't do much. The episode tried to have a conversation about life and ethics, but none of it really made sense in the context of the setup. On the whole, this episode was just really weird and never really seemed to know what kind of story it wanted to tell. It's weird, but not interesting, and just falls apart very quickly. I was surprised how silly and dumb this episode was since it's considered one the series' best. I really hope they get better from here.

The concept of the episode is decent -- a trap in space and time that sucks in ships, never to be seen again. However, once the ships get into the trap, there's a lot of silliness with a space council ruling over the pocket dimension. They exposition dump, threaten the ships a bunch, but they really don't do much of anything. They just wring their hands a lot and then sit on the sidelines. They could, in all honesty, be removed from the episode completely and the story wouldn't have suffered (probably would have moved along faster). 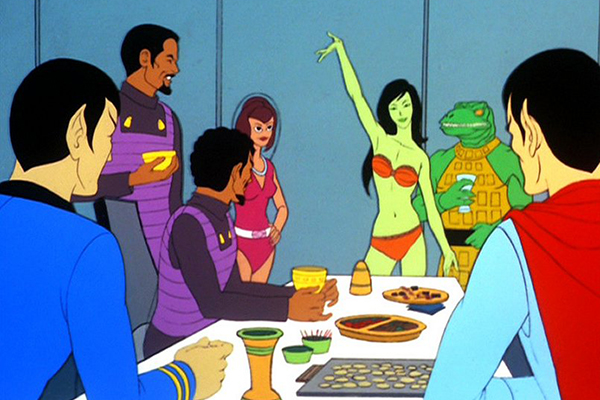 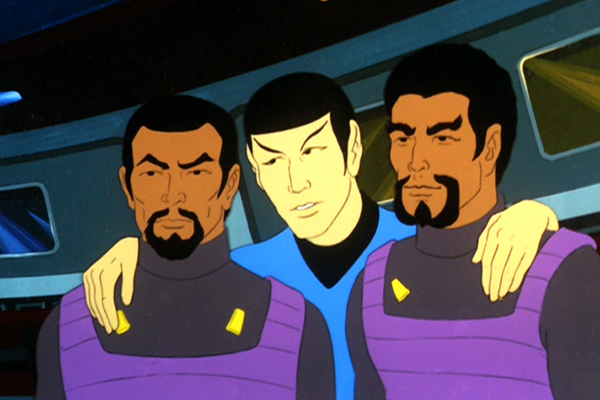 Plus, the whole storyline hinges on technobabble and handwave physics. The crew spends a lot of time talking about what they plan to do, but none of it really makes sense. It's just there to make the crew look busy.

Seriously, I was bored with this whole episode. Things are not looking up for The Animated Series.

Traveling in the Enterprise shuttlecraft Copernicus, Spock, Uhura, and Sulu transport a stasis box from the Slaver race, a powerful weapon unlike anything in the universe. When the stasis box begins to glow, Spock deduces that it means another stasis box must be nearby in space. Landing on a nearby planet, the crew ventures out to find the second box. Unfortunately, the crew is almost immediately attacked and knocked out. The crew will have to find a way to escape their captors, with the box, and get out of the planet alive.

Okay, this episode was at least tolerable. The idea of this race of beings that existed long ago, and then disappeared, leaving only powerful super-weapons behind, is a damn fine concept. The show certainly explores this idea thoroughly, mining a lot of interesting little ideas from this one big concept. While the episode spends a little too much time talking down to the audience, explaining all its big concepts, there's still a good core storyline here that I was actually interested in what was going on. 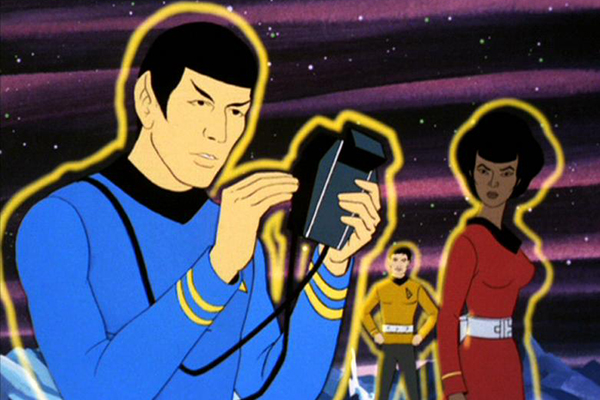 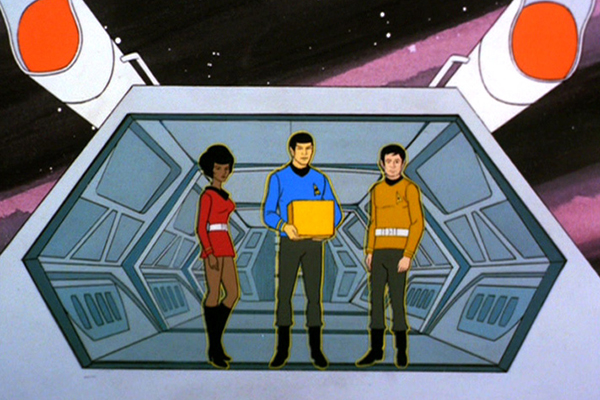 Pacing, though, was a bit of an issue here. The crew gets captured, escapes, gets captured, escapes, and then gets captured again. In none of that time do they ever really do much. Their captors are the real agents of the story, and the three Enterprise crew members really just sit on the sidelines and talk and talk. Giving them more to do, and having less of them just watching what's going on, could have given this episode more energy and really just made it even better.

Still, considering how bad some of these episodes have been (and these are supposedly the good episodes), any halfway decent episode of this series is a real winner by comparison.

In this, the last of the episodes we're watching through, the Enterprise is sent to the Vidala solar system to aid the Vidala on a secret mission. They soon learn that their mission is to find a lost artifact, the Soul of the Skorr, a totem that has the encoded mind of a religious leader within it. The crew, with the aid of a elite group of specialists, have to find the Soul and retrieve the artifact before a war across the universe is somehow started. Because that's a thing that happens with a religious artifact is apparently stolen.

Sadly, as the last of the set I intend to watch, this episode was a complete dud. It didn't feel like a Star Trek episode at all, just a weird caper that so happened to have Spock and Kirk wedged in. The rest of the crew there was ill-defined, what they could do and why they were there really didn't make a whole lot of sense and, despite all the setup, nothing really happens. 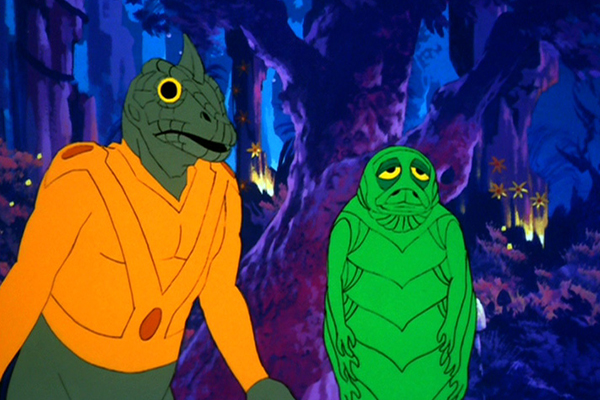 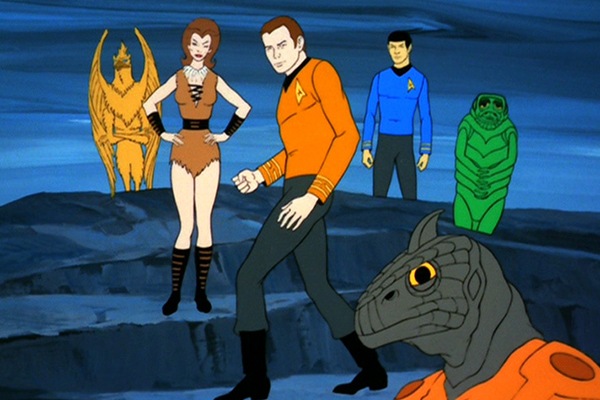 Oh, sure, there's a lot of action, but none of it really is in service of anything. They drive across the surface of a volcanic world, and then the volcanos erupt so they have to run from the lava. They get lost in a snow-field and then somehow manage to carry on. They get to a structure and get attacked by dragons, and then they shoot down the dragons. These are all events that took place, but none of it really mattered. It was just table-setting to get to the artifact. Despite the message being these were the elite warriors chosen to find the artifact, somehow it felt like anyone could have done it. These people just somehow lucked into it.

It's an episode that doesn't do much, doesn't go anywhere, and felt like it could have all been resolved in five minutes if not for the "wacky hijinks". Total waste of time, really.

I went into The Animated Series hoping that, somehow, it was a lost gem. It couldn't really have been that bad, right? Not with all the talent involved. Sadly, yes, it really could be that bad. After watching the five episodes I set for myself, I realize that Gene Roddenberry was right: it's best if we just pretend this series never happened.