They're Hard on Space Ships

After fans turned against the second voyage of the reboot crew, Into Darkness, it was clear that Paramount had to do something, change something to please the fans and keep audiences coming back for their movies. A shakeup, of sorts, was required. So while the whole crew of actors returned, new director Justin Lin (of The Fast and the Furious franchise) was brought in to give the movie a different energy. 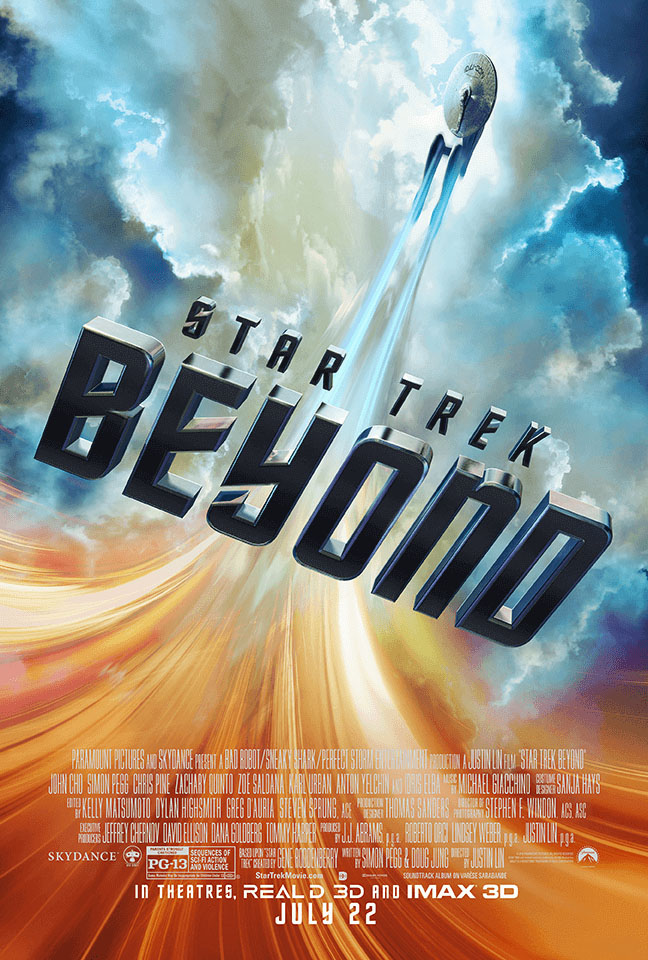 While I certainly didn't hate Into Darkness (especially after a few viewings of it so I could learn to appreciate what the film gets right), I will agree that something new needed to be done. The first two movies essentially retreaded much of The Original Series. While it worked in the first movie, 2009's Star Trek, it still felt a little too reverent at times. That was made worse with Into Darkness and it's largely unnecessary Kahn plotline.

So for the third film, much of reverence to specific beats from the source material is played down. Gone is the parallel plotting, instead giving us a film that feels contextually familiar to the characters we know without being beholden to any one particular storyline. In Star Trek Beyond, the crew of the Enterprise is three years into their five year mission, and Kirk is just straight-up bored. The day-after-day of monotony out in the black has worn on him and he's beginning to question why he's even in Starfleet. Spock, too, has his own concerns largely related to his place in Vulcan society and questioning if he's doing the right thing staying with the humans instead of going to New Vulcan to help them rebuild and repopulate.

Their concerns, though, are put on hold when a distressed ship shows up at the new starbase, the Yorktown -- a starbase the Enterprise is docked at for shore leave. The captain of the pod claims that her crew has been taken by an evil alien, Krall (Idris Elba), and she needs the help of Starfleet to rescue them. Following the path of the pod back through a nebula, the Enterprise is attacked by Krall's drone ships and, eventually, destroyed, with her crew fleeing to the nearby planet. There, most of the officers (Kirk, Bones, Spock, Chekov, and Scotty) have to work to find a way to save the crew while Sulu and Uhura, with most of the crew in a detention camp, have to figure out a way to stop Krall and find a way to escape. And they have to work fast, as he has a WMD he plans to use on the Yorktown.

First and foremost, the weakest part of the film is Krall. I like Idris Elba and will watch him in anything he's in, no matter how good (The Wire, Luther) or bad (Prometheus, The Dark Tower) the film is. I wouldn't say the man is a chameleon as the characters he plays always end up being the same -- strong, tough, quiet until they're suddenly shouting with rage, and occasionally lapsing into a Hackney accent -- but he's performances are always powerful. Here, as an alien, Elba seems a little lost but I don't blame it on the makeup but, instead, the weird accent and inflection Elba takes on. He has such a strange way of talking in this film that it seems like the actor loses the performance to just say the lines. 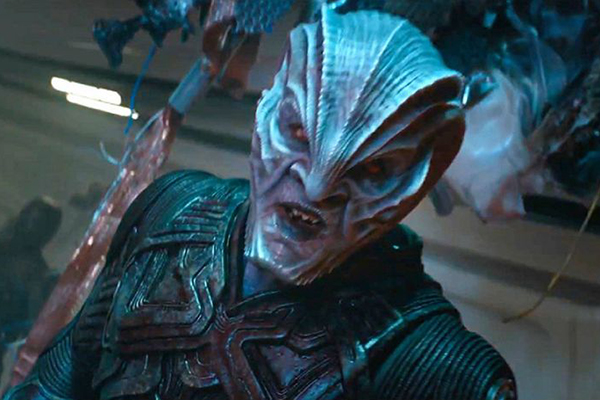 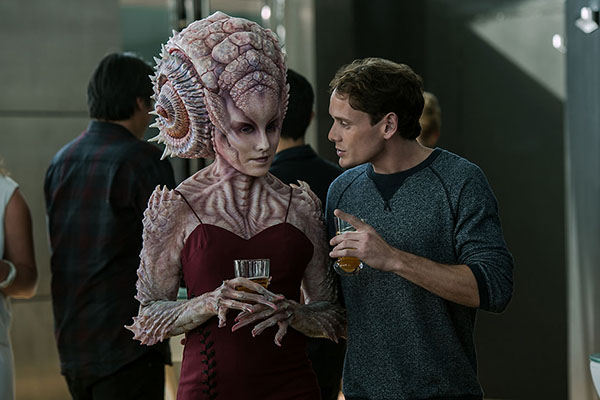 This isn't really aided by the fact that Krall isn't much of a villain. His plan, to unleash a WMD that dissolves all organic matter that it touches, is workable and the effects of what the weapon do are appropriately horrifying. The movie certainly goes out of its way to prove how villainous the guy is, with him handily taking out the flag ship of the fleet in the first act of the movie, so it's not like we shouldn't accept him has a solid villain. But the film keeps vital information about who Krall really is as a secret until the third act, so for much of his time on screen the guy is a powerful, but otherwise blank, character. We don't understand him or any of his motivations, and since the actor is struggling with the role, it's hard to care at all about him.

Thankfully, the film minimizes the villain to instead focus more on the crew. While I'd normally hate this, I have to think this was the right plan for this movie (probably something done in the editing room when they realized the villain just wasn't thrilling enough). The movie takes the wise tack of splitting up the crew, forcing them into unlikely pairs so that each character gets more to do:

One of the best things to come out of the decision to pair off the characters is that there's no central lead to the movie. The first two films with the new crew were, essentially, the "Kirk and Spock" show. While the rest of the characters had things to do in the background, a couple of good moments here or there, the emphasis was on the Captain and his Science Officer. Here, though, each plotline is just as important, and because Kirk and Spock are split up, there's no single pairing that naturally becomes the lead. Everyone is given something important to do, and each of their story beats has weight and consequence for the plot as a whole. 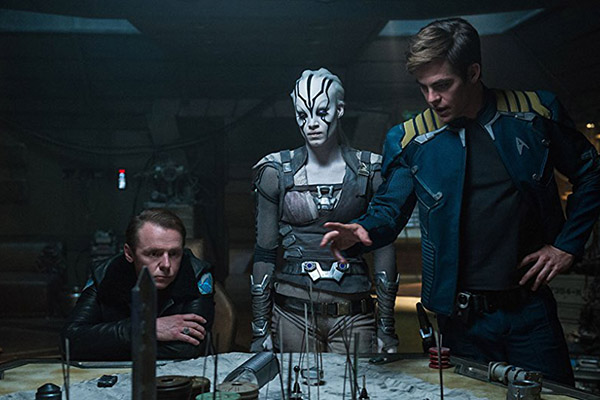 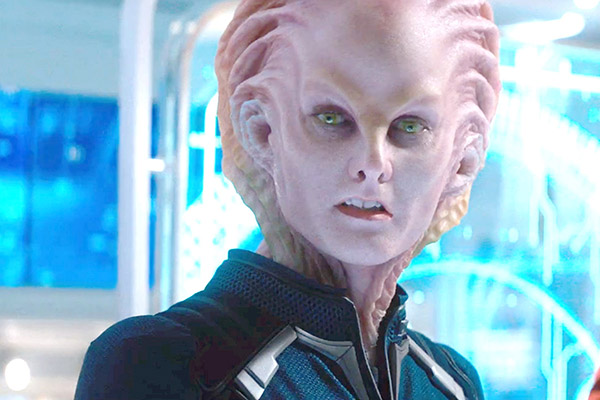 While the action in the movie is big -- from the big sequence of the Enterprise being destroyed, to the crew rescue, the Franklin taking off from the planet, and then the chase sequence at Yorktown -- the movie in some ways feels a little smaller. While I normally grouse when Trek movies feel like overly long episodes, in this case I think the small, more personal feel of the movie works. It's nice to spend time with the characters and really get a feel for each of them, getting moments that were sorely lacking in the previous films. The Bones and Spock pairing, for example, allowed us to really see their friendship, a reflection of their time in the classic series that, up til Beyond was missing in the new films.

By making the stakes more personal, the plot more focused and less epic, the movie crafts a tighter story that really serves these characters well. And, importantly, the story becomes a lot of fun. We get to enjoy all these people as they navigate their way through another adventure -- the ride is fun, and these actors are clearly enjoying their time together. That's why I think Beyond works: without pandering or trying for cheap laughs (which the Next Gen films did way to often), the producers crafted a person story that still had big action moments. It's the right kind of smaller Trek film the series has always struggled to make.

It's not the best film in the whole big series, but it is a good one, a solid adventure worth revisiting. If Chris Pine doesn't come back for a fourth go round in the series (which is in doubt at the time of this article's writing due to a contract dispute), this film does serve as a good send off for this crew. I hope we get to spend more time with them, but at least right now they've gone out on a high note.