Get Your Menagerie On

As fans will now, the early eras of Star TrekOriginally conceived as "Wagon Train in Space", Star Trek was released during the height of the Hollywood Western film and TV boom. While the concept CBS originally asked for had a western vibe, it was the smart, intellectual stories set in a future utopia of science and exploration that proved vital to the series' long impact on popular culture. were plagued with failed attempts to get, and keep, the franchise on screen. The first two seasons weren't exactly ratings smashes, and its third season was plagued with executive meddling and bad ideas, such that the series was canceled before it could get a fourth year. Attempts to revive the franchise were either mixed at best (like the terrible animated continuation) or simply failed to happen at all, "like Phase II). Even before all that, though, Trek still had one other, noble misfire it had to get past before it could become the show people loved: "The Cage". 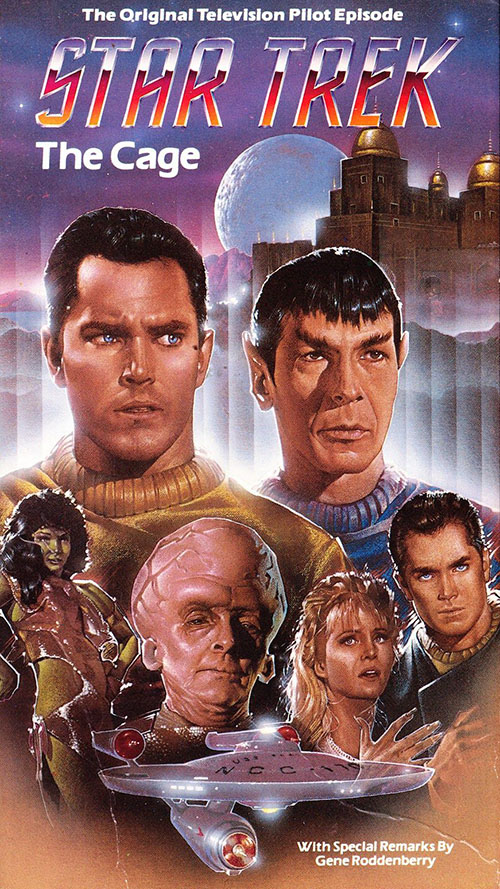 Although eventually added into continuity via the two-part episode of the first season of The Original Series, "The Menagerie", ,the very first episode of Star Trek was it's pilot, "The Cage", and, wow, did it just not work. Featuring a largely different set of crew members (aside from Spock), and an adventure that, at the time, was considered "too cerebral" for what the network wanted, "The Cage" was produced, then shelved, so the show could be retooled. Out was much of the cast and while the setting of the show, the U.S.S. Enterprise, was kept, everything else about the series felt pretty different.

Had the pilot not been brought back as "The Menagerie", it's possible that the continuity this episode setup would never have been acknowledged at all. The only reason it was even resurrected for a first season two-parter was because of production delays on the main series. They needed some filler to cut into the middle of the season and they already had "The Cage" in the can, so a two-parter (with minimal effort) was born. That doesn't really make this first episode any more watchable, though, but it is interesting to know the history. Still, ditching this episode for the series we'd eventually see was certainly the right call.

In "The Cage" we're introduced to an earlier crew of the U.S.S. Enterprise: Captain Christopher Pike (Jeffrey Hunter), Fist officer "Number One" (Majel Barrett), Mr. Spock (Leonard Nimoy), and Dr. Philip Boyce (John Hoyt). Heading to a star base to resupply and heal their wounded (from a previous adventure only discussed but not shown on screen), the Enterprise gets a distress signal from a nearby planet. Although initially hesitant to go down to the planet, Captain Pike eventually agrees to send a rescue mission when it is confirmed (by Number One) that there are actual survivors still alive on the planet.

Heading down, Pike and his away team stumble across a few of the surviving scientists, along with female survivor, Vina (Susan Oliver). Vina manages to draw Pike away from the rest of the crew, and then a trap is sprung: Vina disappears, big-headed aliens knock Pike out, and they drag him into their base before any of the crew can stop them. Oh, and the rest of the scientists also vanish, revealing it was all a ruse. Pike finds himself trapped in a cage, a specimen of these aliens, while they try to coax him into mating with Vina (or, as this 1960s show puts it, "develop a husband/wife pairing"). Pike has to find a way to break free of their mental tricks, and this cage, so he can get back to his ship. 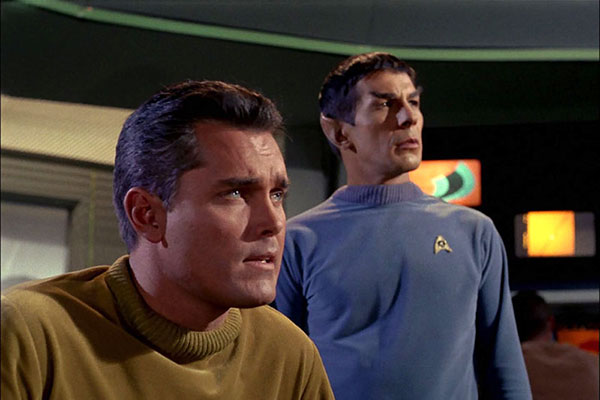 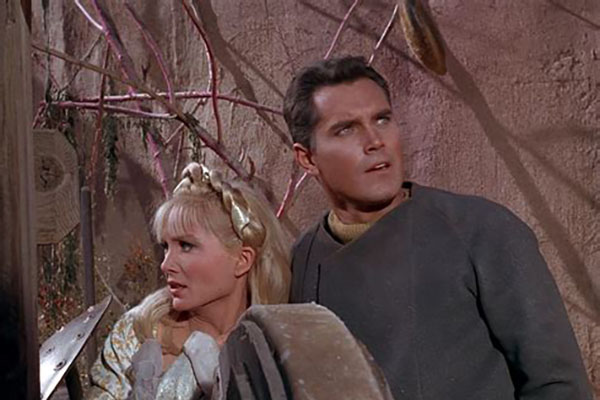 I don't think the problem with this episode is that it was too cerebral or lacked action. Compared to many of the episodes that would come later, the story content of the episode feels on par with what Gene Roddenberry wanted to tell in his "wagon train in the stars" series. No, the issue with "The Cage" is that, frankly, it's pretty tedious. It's not just in its very long length (clocking in at over an hour) but also the way the show fails to build up its characters, or any suspense, at all. It's tedious to watch because, at this in this first iteration, you just don't care about what's going on.

A big issue is that the show simply doesn't know how to handle all its elements just yet. The show immediately starts by having Pike act gruff and surly, complaining about being captain and all his responsibilities. This puts the character off on the wrong foot with the audience. His acting like a jerk, especially to all the female officers on the ship (which he goes out of his way to point out, even if the show meant for it to sound like he was commenting on them "in a good way") really makes him seem like a prick. This might have been papered over if the show could have had him work through his issues with the rest of the crew, bonding as a team, but that doesn't happen.

Instead the show strands him away from everyone else such that the only bond he develops is with Vina. Bear in mind that she helped capture him, all so she could have a companion in this experiment. Yes, she's a prisoner but she's also a willing participant (as we eventually learn). She's not quite a villain, but not really far removed from them, leaving us with a weird connection between the only hero we really know and his captor. It's just an odd way to develop any of the characters on the set.

Worse, we don't really get any development of anyone else in the crew. Number One is relegated to a few lines and standing around. Spock doesn't get much more to do and, aside from his greenish pallor and pointy ears, we hardly get to see the character of Spock we'd eventually know. As for the Doctor, he does little more than serve martinis to get Pike to loosen up, all before disappearing for most of the episode. With Pike trapped on the planet we should have gotten a strong B-plot of at least Number One and Spock working together to plot a way out of this mess, but that never really happens. They react without even showing their true selves. 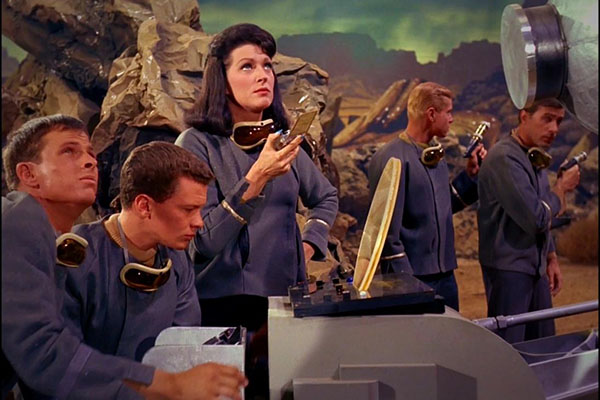 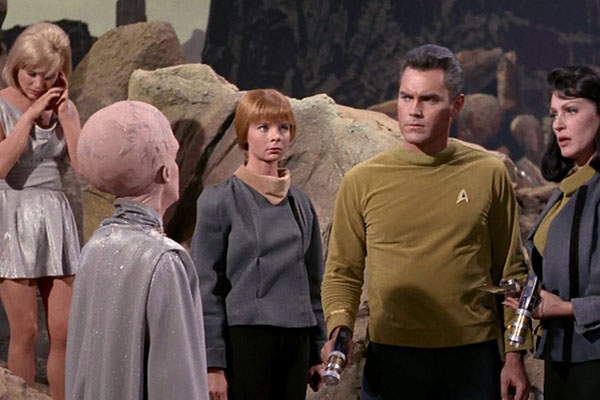 Maybe the concept of big-headed aliens watching humans trapped in captivity was a cool story idea at the time, but it certainly doesn't feel free now. Everything about this plot line feels expected. It's dull, and more than a little trope-y, leaving me feeling like I've seen it all before (and in better ways) on other shows of the era (let along later shows to come out after). The episode had a story to tell, and it did tell it, but it's not a very good one at all, let alone acting as a good first episode for a series.

Perhaps if Pike and his crew could have gotten something more like the early episodes of the series to come (maybe like the first real episode of the series, "The Man Trap"), allowing him and his crew time to grow and establish themselves, an episode like this could have worked after. As it is, we hardly get to know this captain of the Enterprise before he's shoved out an airlock. As his first adventure, and the only time we get to know him before Captain Kirk takes over, I have to say: doing a new pilot to kick off the series was absolutely the right call.