An Expected Escape, A Big Confrontation

Most weeks it's been hard to find episodes to talk about in this column. While there have been occasional really good (or really bad) episodes for the various shows, mostly these seasons have been pretty average (maybe a tad mediocre), leaving me desperate to find something good to talk about (that isn't always Titans). This week, however, I have the opposite problem: most of the episodes this week were pretty darn strong (or, in the case of Legends, really awful) and I had to really decide which ones were worth discussing.

In the end I chose the two episodes that, for good or ill, moved their respective plot lines along the farthest. After complaining about wheel spinning for a few weeks now, we're finally getting forward momentum, and I figure I should reward that.

While most of the episodes in the season so far have divided their time between Oliver in prison, Felicity and Team Arrow outside, and the flash-forwards with the remnants of Team Arrow in a future hell-scape, this week instead strips the show down to just one focus: Oliver on his last day in prison. If you're wondering how the show pulled that off so quickly, well, honestly, the show doesn't do a really good job of justifying it.

In recent events the D.A. Laurel Lance (who is really Black Siren from Earth 2, having taken the place of the dead Laurel in Earth 1 despite not having any lawyerly training at all) had tried to argue for Oliver's release, in court, because he took a plea deal from the FBI and the FBI hadn't actually honored their end of the agreement. Nevermind that Oliver is already in prison, and signed paperwork about it, so that's not really how plea deals work. Of course, the appeal was thrown out because of course it was. But then, Team Arrow caught big bad Diaz, and since the FBI was supposed to be the one to catch him (as part of the deal), Team Arrow elects to trade him in for Oliver.

So let's think about this. The FBI already had plans to put Diaz in jail, and they also wanted Oliver in jail. Oliver, remember, is a confessed killer having put arrows into who knows how many criminal over the years. Whether he thought his actions were justified or not, they were murders in the eyes of the law. There is no way that the FBI and the DOJ would agree to release Oliver just because his team caught a criminal -- more likely they'd just jail both and say, "too bad, so sad."

But, okay, let's just accept that somehow law enforcement was okay with this arrangement. In that case, Oliver is getting out, and the episode focuses on his last day in prison. While Oliver is getting ready to get out, Diaz is being sent to the exact same prison to be put away for a long, long time. Yes, in the span of a week or so, Diaz goes from captured by vigilantes to convicted and sent to prison. This is another detail I have a problem with because no matter how efficient the criminal justice system is, there is no way Diaz's case could move forward that quickly. It's beyond unlikely that Oliver would be getting out the same day Diaz was getting in, and even more unlikely it could all occur in a week. 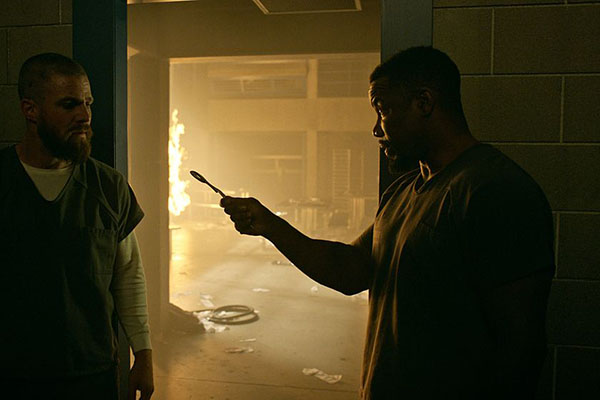 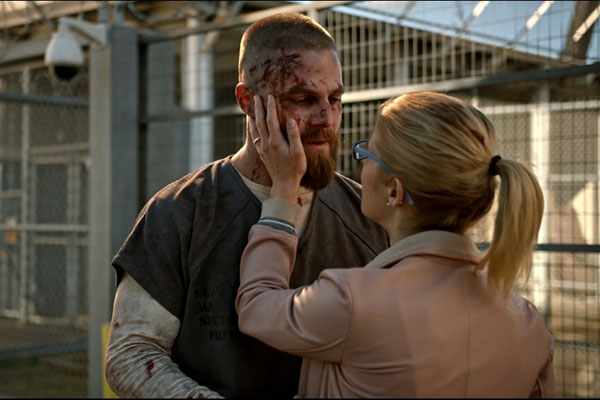 Of course, the whole reason for this setup was so we could get the juxtaposition of Oliver and Diaz crossing each other, all for one final showdown. It's what the series has been building to ever since the mid-season climax last year. It's a tad surprising, for the sake of the story, that the show elected to get this all over and down with only seven episodes in (but then we have the Elseworlds crossover happening soon, so clearly the show had to get Oliver out somehow in time for that). This isn't the worst case of the Arrowverse forcing plot lines forward just to make everything work out, but it's pretty high up there.

The worst part is that the final confrontation between Diaz and Oliver is just so lackluster. Don't get me wrong -- if you shut your brain off and try not to think about the narrative hoops the show has to jump through to make all this work, the episode itself has some pretty good energy, a kind of "let's burn it all to the ground since we're never coming back to this prison" mentality. While the show tries to make a case that Oliver has changed in his time in prison, the character is still a force to be reckoned with, a one man army who will take everyone on if necessary to do what's "right". The show does a good job of selling his character, and since it's his series, I enjoyed the focus, and the impact, of his story here.

The problem is that Diaz is an underwritten character given more weight than he deserved. When he was a minion at the start of least season he worked well enough -- a guy with a recognizable face to spew some tough like once in a while. But he just doesn't have the gravitas, or the development, to sell his status as a big bad, and that hasn't changed throughout the near-season he's been the focus of the show. However good the episode around him might have been, you just don't care what happens to him here, whether he escapes, dies, or stays in prison doesn't matter. He's just there to motivate Oliver and put in a half-way decent fight sequence.

In the end, the most important thing is that Oliver gets out of prison. He does it after serving bloody justice behind bars, and he really should have been put right back in his cell for at least a few more weeks. But he's free, and we can all try to move on from this narrative diversion that only dragged the series down since it divided the attention of the writers for weeks on end. Let's all be thankful for that at least.

Hey, we're talking Black Lightning three weeks in a row, but we kind of had to: over the course of those three weeks the show went from bad, to interesting, to great. This week's episode redeems so much of the wheel spinning as just about everyone moves forward and the whole show really comes together for 45 solid minutes.

The focus of the episode is the continuing story of the Perdi and Sange in South Freeland. Black Lightning goes into Sange territory to find the baby the evil white people kidnapped (after two babies were born last episode, one of which made it out of South Freeland while the other did not). After getting attacked by the Sange (while running low on juice), Black Lightning is captured and taken to the Sange leader (and our favorite new villain), the Looker (which, let's be frank, is a terrible name for her). There we get a confrontation between B.L. and Looker that, essentially, taps into the same thoughts I had from last episode: the two are, in a way, two sides of the same coin, similar in intent if not in methods or beliefs. Still, when their meeting of the minds doesn't go well, Looker orders her minions to kill B.L. while she goes off to find the other baby. And they do... via electricity.

So yeah, instead of actually killing him, the minions juice up the superhero and he easily takes them down. He then, eventually, joins up with Anissa (aka Thunder), and the two fight off the Sange a second time. In the process Looker is wounded and captured, and will likely be sent off to the ASA -- the government agency in charge of dealing with the meta-human "threat". It's a solid ending to her story that also opens up the potential for her to come back even stronger (after getting experimented on by the ASA, of course). I'm looking forward to this since even thought she gets captured easily here, she's still hands down the best villain the show has. If she doesn't come back, bigger and badder than ever, later in this season, I will be sorely disappointed. 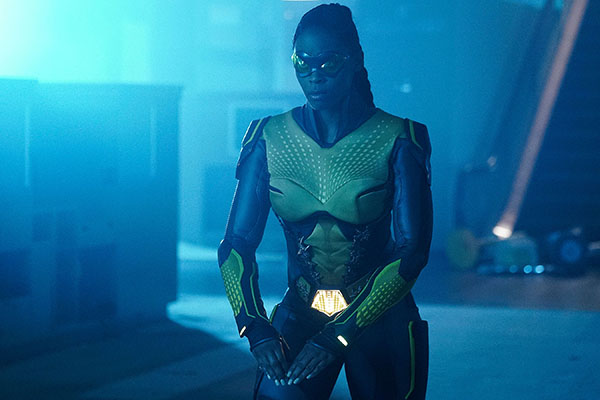 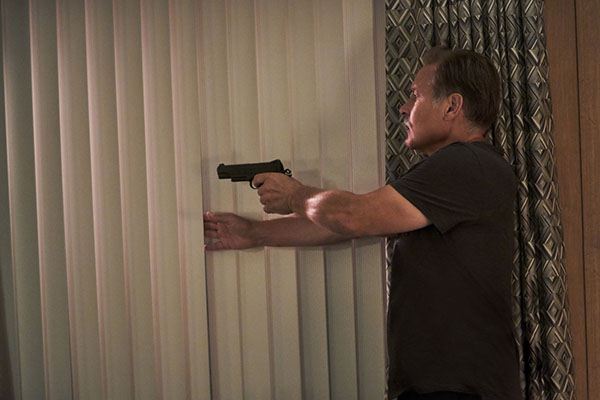 Speaking of villains and disappointment: what the hell is going on with the Tobias Whale storyline? Tobias is barely a presence in this episode (which, honestly, improved the overall pacing of the story, to be sure), but his storyline is still stuck in the mud. Thankfully, his minion, Painkiller, gets a lot of forward progression this episode. After telling Jennifer about his struggles with Tobias, and his desire to not be the villain everyone thinks he's become, Jennifer comes to his rescue, stopping some of Tobias's thugs from killing Painkiller. The two, now back to being in love, then drive out of Freeland for part unknown (for now anyway). This not only gives Painkiller a new path on the show but also gives Jennifer some agency over her own life. I doubt the show will keep the two characters out of Freeland for long, but for now it's an interesting narrative turn for the two of them.

And, best of all, Lynn is largely ignored and given very little to do. She's not a very interesting character, and they could write both her and Tobias off and I wouldn't miss them at all. And who knows -- with Painkiller out of town, removing our last real connection to Tobias, maybe his plot line can get wrapped up in no time and the show can fully move forward after this. I doubt it, but it's still a nice thought.