I Probably Would Watch a Movie About the Batmobile

Teen Titans Go! to the Movies

Considering the lull we had for a while there at the movies, suddenly I have a glut to watch again. I still need to get over to see the new Mission: Impossible film (Gun Man Run Fast Across Europe, Again!), but last night I dragged my butt to the theater to see Teen Titans Go! to the Movies. Watching Tom Cruise nearly kill himself over and over again is fun, sure, but he's got nothing on the Teen Titans. Sorry, Tom. 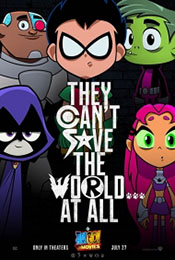 As I've noted previously, I'm a fan of the Cartoon Network Teen Titans Go! series, with its weird humor, off-the-wall stories, and so many jokes and references that are clearly designed for adults. All I needed from to the Movies was more of that same weird bent and strange, almost anti-humor style, and, thankfully, the movie did deliver. It's still very much a kid's film in its style, color, and level of violence, but there's plenty in the film for adults to enjoy (that probably goes right over the head of any of the kids in the audience).

The film starts with the Titans answering a crime alert and getting into an immediate battle. Except, instead of finishing of the villain, they start up a rap song about who they are (a convenient way to let anyone in the audience know the names and abilities of the characters in the process). As the rap goes on and on, the villain wanders off to steal a bunch of stuff only to eventually be apprehended by the Justice League. That's what the main plot really kicks in: the Teen Titans are a bunch of goofball losers that never do any actual crime fighting. Every other hero is getting their own movie (including Alfred, the Batmobile, and Batman's Utility Belt), but no one in their right minds would actually greenlight a movie about the Teen Titans (thus immediately poking fun at the whole concept of the movie we're literally watching).

The heroes decide that to be taken seriously they need an arch nemesis, and that's where classic villain (and regular Teen Titans foil) Slade Wilson (aka Deathstroke) comes in. Slade plans to brainwash the whole world and have them all do his bidding, but the Titans keep getting in his way. Much of the movie, then, is about the heroes fighting Slade, and Slade finding ways to thwart the Titans. It builds to a proper climax and all feels very heroic. The film may be lampooning superhero films, but it also does follow a pretty normal superhero arc in the process.

Being a Teen Titans Go! property, to the Movies has a lot of off-the-wall humor and strange beats going on. Aside from the multiple musical numbers (a couple of which, admittedly, go on a little longer than they probably needed to), there are all kinds of long gags the characters will start up, like going back in time to change superhero origin stories, or dream sequences parodying Disney movies, plus the occasional celebrity cameo. There's a lot going on at all times, with the writers clearly feeling the freedom to write some gags large and go to places they normally couldn't in the limited run-time of the show. 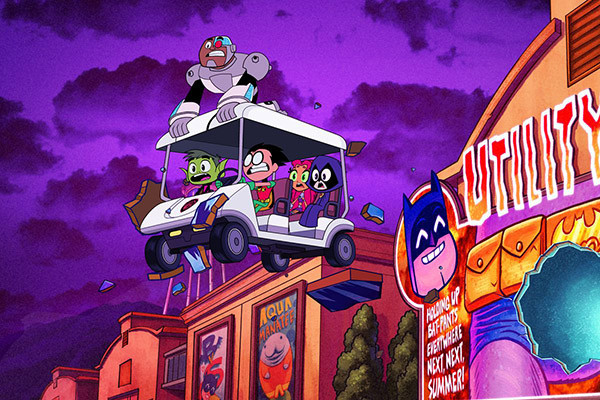 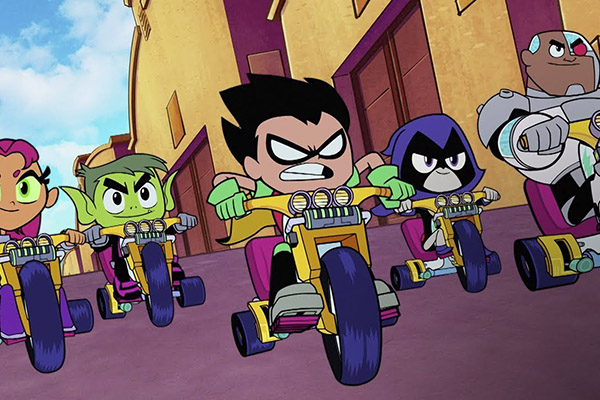 That said, clearly Warner Brothers/DC had some limits to what the show could get away with. The studio wanted a movie they could see, something to get butts in seats (beyond just my own) and make some mad bank. Thus, the movie feels a little safer, a little more sanitized than the cartoon it's part of. Like with some other comedy shows adapted to the big screen (such as Mystery Science Theater 3000), it does feel like the studio insisted on a safer product, one that slowed down a little to let the jokes ring out before the next humorous patch was hit (and something that didn't offend people too much). Fans of the show will probably notice the pacing is off and that some regular gags are missing (if fans were expecting an appearance of the Super Robin, or more from HIVE, or a reprise of "The Night Begins to Shine", they were sadly left in the cold).

This is very clearly a big studio movie, so everything has to be nice and neat and tie up with a big villain fight at the end. A number of Teen Titans episodes have just unceremonious ended without resolution, and the show regularly ignores continuity from one episode to the next, killing characters one day to have them sitting on the couch the next as if nothing happened. That kind of throwing out of convention, of willfully killing characters and ending ideas without ever resolving them, just won't fly in a big budget movie. And while the budget on to the Movies may not be as big as, say, Batman v Superman: Dawn of Justice (which to the Movies gleefully parodies at least twice), it still clearly had a bigger budget than the TV series it's based on. The studio wants it's money back and then some (and then some again). Things were just not going to make the cut.

I've read reviewers compare this movie to Deadpool and I think that's apt. These are both movies that gleefully shatter the fourth wall (with the heroes sometimes turning to the screen, talking right to the audience) with motor-mouthed heroes spouting jokes left and right. Their source material (a cartoon for the Titans, comics for Deadpool) is rife with constant gags, weird tangents, and out-there references only a select few fans would ever get. Their Hollywood productions, though, have been safer, less biting and less weird. "Sanitized" really is the best term for it.

Is that a bad thing? Not necessarily, and in the case of Teen Titans Go! to the Movies the producers do their best to work within the studio constraints to still put together a very weird movie that goes to places other movies never even contemplate. The film doesn't retread the same material as the show, and it never feels like an episode writ large, but it's also hard to say that it ever quite reaches the heights of the best episodes of the series, either. 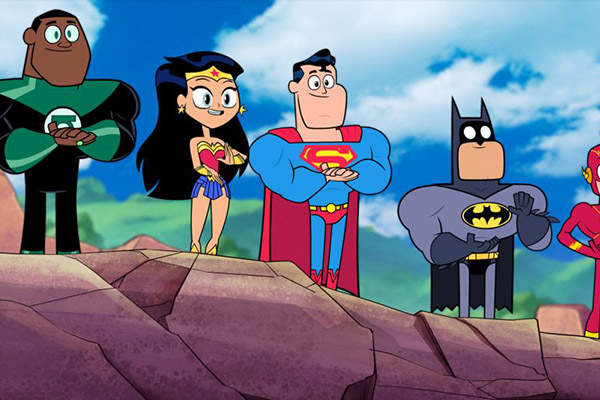 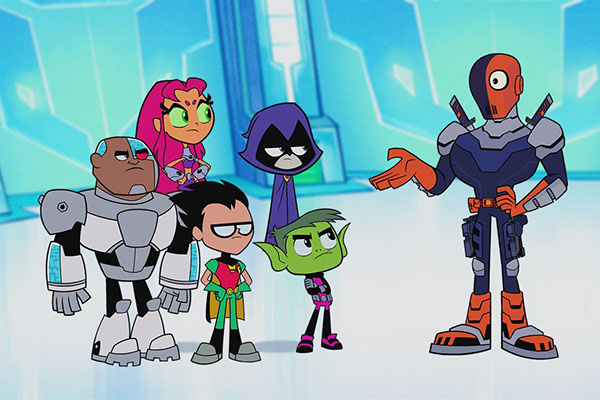 Certainly the movie is being reported as a disappointment at the Box office. It's only managed to pull in $11 Mil so far (which, against a $10 Mil budget and only having been out 5 days, isn't bad at all), and there's already talk of calling it a flop. Superhero movies, common knowledge declares, are supposed to make more money than this.

But should other superhero movies really be the comparison? It's great to say "this is an animated version of Deadpool" but it's unfair to then expect a movie spawned from a silly little show to make $800 Mil. Expectations have to be manages, especially, when the audience for this movie, in theaters, is probably pretty small.

Think of it this way: many of the fans of the cartoon will probably see the show eventually, but would they watch the trailers, see that the movie is animated in pretty much the exact same style as the show (fun and goofy but decidedly low-budget) and think, "man, I really need to see this on the big screen!" No, probably not. This isn't a super-flashy flick, so I have to assume most people are just going to wait for it to come out on Blu-Ray... if they had any interest in the movie at all. It is still a weird, subversive little flick that mocks everything it's secretly in love with. Not everyone is going to understand that kind of movie, and fewer will probably enjoy it.

I really did like it though. My quibbles about scope aside, Teen Titans Go! to the Movies is a solid flick well worth watching, with any number of gags and story-telling tangents you won't see elsewhere. Whether you need to see it in theaters is a decision you'll have to make for yourself, but I do encourage you, one way or another, to eventually see the film. If this kind of humor is your bag, to the Movies does not disappoint.