When DC announced their streaming service, DC Universe (not to be confused with their MMORPG, DC Universe, of the Multiverse of comics, the DC Universe), one of the big selling points of the service was a return of the beloved animated series Young Justice. A show cut down in its prime (because, despite decent enough ratings, the show skewed towards female demographics and Cartoon Network, the network airing it, wanted to sell toys to boys), fans clamored for years for a return of this iteration of the Justice League. An alt-take on the concept of the Teen Titans (without ever calling themselves "Teen Titans"), the show gave us a team of younger heroes, many of which were sidekicks to the big boys, banding together to wage their own fight for justice. The show was great, at times dark, at times funny, but always with a lot of heart, and it was sad when it went away. 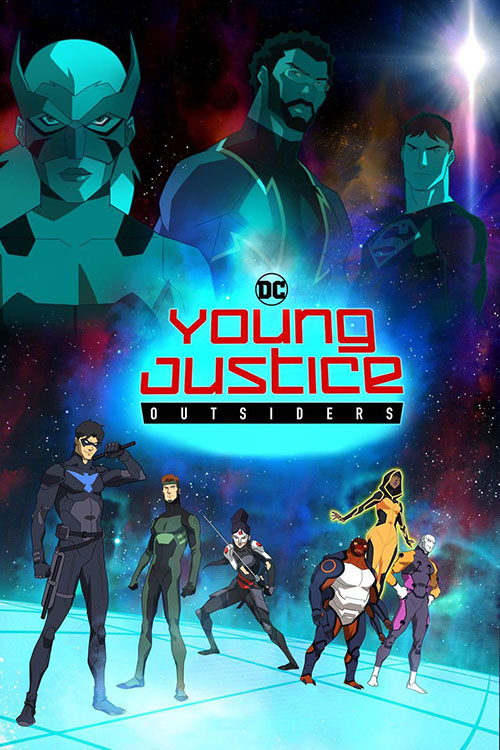 One way the fans had to keep the characters "alive" were the comics that came after the show was canceled, with the producers of the show explicitly saying that if sales on the comics were good, DC could be inclined to revive the series. Whether the comics sales really were what did the trick (although I know I did my fair share of comic buying in support of the series), the show finally came back for a third season (with a fourth season already getting the green-light) six years after it was originally canceled

For those new to Young Justice, the series followed Dick Grayson aka Robin/Nightwing (Jesse McCartney), Kaldur'ahm aka Aqualad/Aquaman (Khary Payton), Wally West aka Kid Flash (Jason Spisak), Conner Kent aka Superboy (Nolan North), M'gann M'orzz aka Miss Martian (Danica McKellar), and Artemis Crock aka Artemis/Tigris (Stephanie Lemelin), and they join together to form a team and deal with a union of various supervillains that call themselves "The Light". Each season of the show takes place over a short period of time, with long time jumps between seasons (season two, "Invasion", takes place five years after the first season and season three, "Outsiders", two years after that). Characters change, situations evolve, and factions within the league, the youth league, and their various teams shirt and change over time. This is a show that forces its characters to grown and evolve and, most importantly, it illustrates that actions have consequences.

Nowhere is that more clear than at the end of second season when Wally West, Kid Flash, has to team up with Barry Allen's Flash and Bart Allen's Impulse and run around a growing anomaly to try and contain it. The three speedsters are successful but Wally West ends up giving his life to see the mission to completion (as the forces at work tear him apart at the atomic level). As this is a show based on comics you'd think they'd find a way to bring Wally back because comics have a revolving door when it comes to death. But no, Wally dies and stays dead, and much of season three deals with the characters still grieving that loss as they work to push forward and continue their mission.

Killing Wally off is one of the most drastic actions the show has taken because, like with Barry and the Justice League, Wally was the heart and soul of the Young Justice team. While both Robin and Aqualad served as de facto leaders of the team at one point or another, it was Wally that gave the team its fun loving energy, it's zip if you will (no pun intended). While all the characters exhibited their moments of levity -- Robin being a dick and hacking everything was a constant, humorous highlight -- but Wally was definitely the bright, shining beacon of the team, and his death left a hole in the series. 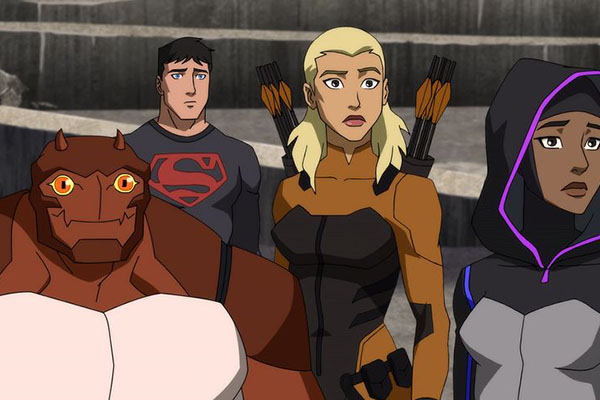 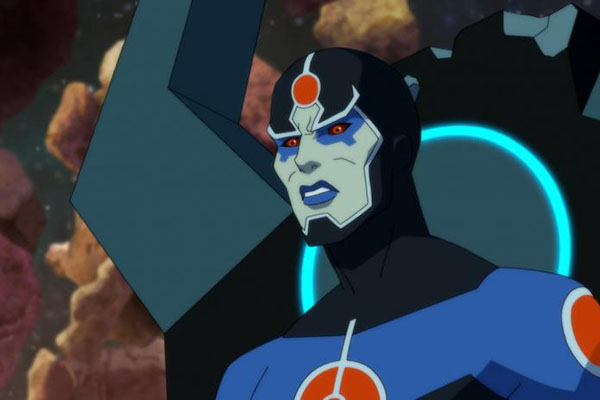 That hole, then, had to be filled by new characters, and to do that the series actually introduced three new ones in the new season. Two of them, Violet Harper aka Halo and Forager aka Fred Bug, were absolute delights. Halo is a girl with powers she can't understand (all based around light and, as she later learns, gifted to her by a Mother Box, which is a fancy device filled with technophobia) and no memories of who she was. Everything was new and interesting to her and the delight she felt experiencing everything gave the show back some of its missing warmth. Forager, a later addition to the team, is a sentient bug from another world forced to abandon his home. Despite this dark introduction, though, he's another bright and friendly face, innocent and open and willing to experience the world and accept everyone for who they are. These two help to patch over the hole left by Wally, no doubt.

The third new member, though... well, he's basically like a younger, angrier Superboy. When he was first introduced, Superboy was a hot head, prone to anger that he threw at everyone. Brion Markov aka Geo-Force is a hot head, but he also has literal heat powers. This, coupled with the fact that he actually has a shorter fuse than even Superboy back in the day means that there's a lot of times where the characters are forced into action because Brion charges head first into danger without thinking or caring. While he's a great motivator for the plot, Brion is not a character I actually enjoy. While Halo and Forager were welcome permanent additions to the team, I wish Brion had only appeared in a couple of episodes before getting relegated to cameo status (something that might happen to his character for next season considering where this season leaves off).

But then Brion has to be in much of the season because this whole arc is about Markovia (his home kingdom), its secret attempts at making meta-human teens, and how those teens were used as weapons both on Earth and across the galaxy. Everything traces back to Markovia, to its experiments, and its exiled prince, Brion. Without Brion as the focus of so much of the season other plot threads would have had to take greater focus, creating a very different story-arc for the season. Which, honestly, might not have been a bad thing.

If I have a gripe about Young Justice, all three seasons so far, it's that the Light (the ironically shadowy evil organization) has a lot of plans they're working on, and big event everything is supposedly building to, but after three seasons we still don't really understand their end goal. That have to be building to something, but what or how or why is still obscured from us. That leaves us with a lot of things happening this season -- Brion and the meta-teens, distress on Forager's home world, the evil Granny Goode and her plans for the Mother Boxes, and something called the Anti-Life Equation -- but not enough focus on any of them to really let us know what the heck is truly going on. Things happen, people fight, villains are defeated, but the Light takes it all in stride as if its all part of their plan. 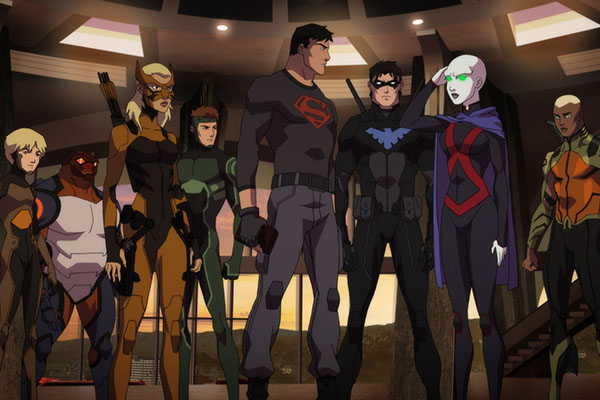 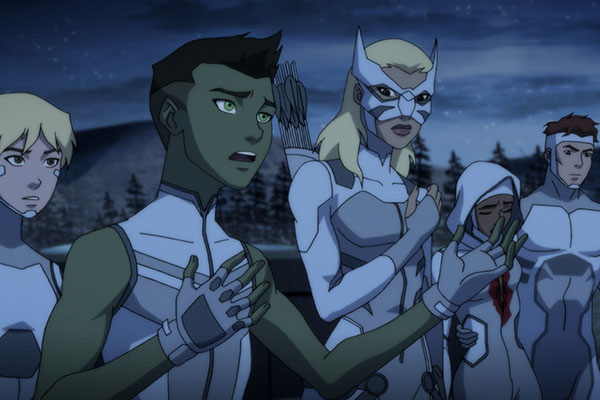 I hate it when villains have shadowy plans that don't get explained, and I hate it more when somehow everything the heroes do fits into the plans of the villains, as if they somehow anticipated it. The heroes need to accomplish something otherwise what's the point of what we're watching. And if the point is to see them fail then we need to know what the plan is so we can understand how it all fits together and why the heroes failed. Otherwise it's' just keeping things shadowy so the villains can cheat, and that's not good storytelling.

I liked a lot of third season of Young Justice -- the characters, the humor, and warm moments between friends. Even the action was great, with plenty of solid superhero moments to go around. Three seasons in, though, the villains finally need to reveal what they're truly up to. The show hasn't gotten to the point where I'd stop watching it if things don't get revealed, but it is bothering me that everything is starting to feel drawn out simply for the sake of keeping everything a mystery. With a fourth season planned I need a solid story with clear goals paired up with the characters I enjoy so much. There's room for improvement here now that the series has shaken off the dust, and I hope they're able pull it all together in season four.