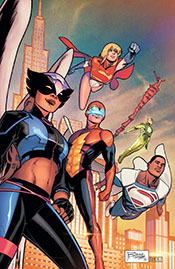 I'm going to talk about DC Comics and its Earth 2 continuity. Just bear with me, because it's going to take a while to get there...

So I'm a giant Green Lantern fan. In all honesty, I'm just a giant DC Comics fanboy. That said, the recent (well, somewhat recent-ish) New 52 reboot of DC continuity pissed me off. After a major event (call it a "Crisis" if you will, since DC can't go five minutes without launching another Crisis) -- Flashpoint -- DC relaunched all their comics at Issue #1, and made sweeping changes to every character. Among other things:

Basically, Batman (Batman, Batman and Robin, and Batman Inc.) and Green Lantern (Green Lantern and Green Lantern Corps.) were left relatively untouched, while everything around them went through a drastic upheaval. Some stuff we rejiggered, like Detective Comics being relaunched as the early adventures of Bat "My parents died in front of me spoilers" Man. Green Lantern's Emerald Warriors title ended, while New Guardians and Red Lanterns started up. But basically, all their backstory remained the same.

The reason for this big continuity reboot (in story anyway, since in the real world, the reason was money) was because "superheroes had only been around for five years, and the continuity needed to be cleaned up to account for this narrowed timespan" or some such bullshit.

In and of itself this creates all kinds of flaws in the continuity that was left alone. How could Batman have three Robins in the span of just five years (one of which grew up from a twelve-year old to a post-college adult, another who grew up then died, and a third that also grew up). Meanwhile, the characters of Hal Jordan and Oliver Queen (the silver age Green Lantern and Green Arrow, respectively) were old friends for years, and killing Green Arrow's backstory removed one of the major plotlines through Hal Jordan's early years (a relationship they continued to touch upon time and again, not the least of which during the Rebirth series where they finally brought Hal Jordan back to life).

Suffice it to say I was not a fan. I pretty much stopped paying attention to most of the DC titles I liked, and only continued to get Green Lantern et al because the continuity hadn't been touched all that much (relatively speaking, anyway), as well as out of a sense of narrative inertia (I've been collecting everything in trade paperback format since Rebirth so I had to keep going just to "complete" the collection).

Then Geoff Johns, the lead writer for Green Lantern left with a fantastic finish that perfectly ended his run and could act as a proper end for all Green Lantern continuity if you wanted to choose it as such. I took that choice and ended my pulls on all Green Lantern titles.

That doesn't mean I gave up on DC, though. Instead, I've moved over to Earth 2 and its spin-off title, Worlds' Finest. Fans of classic DC Continuity will remember that Earth 2 was the home to the Golden Age heroes (Green Lantern Alan Scott, Jay Garrick Flash, Hour Man, Doc Fate, etc.) while Earth 1 was the home to the Silver Age characters (which all spun out of the fact that the Golden Age heroes didn't show up for a long time after WWII, only to come back in cross-over appearances with the later-day heroes).

Well, after Crisis on Infinite Earths (remember what I said about Crises), all the Earths were merged into one reality (New Earth). Over time, other Earths popped back up (such as a return of Earth 3, with the supervillains modeled after superheroes, like Ultraman, Superwoman, and Owlman), and then disappeared again, all based on the whim of DC's publishing team.

Currently, there are a bunch of Earths again. New Earth is still kicking it in the main continuity, while Earth 2 has recently sprung up again, and returns as the home to the "Golden Age" characters, although they're all getting rebooted into modern versions (no weird time distortion field needed -- yes, that actually happened once).

I will admit I wasn't a fan of the older Golden Age characters, but in their new book -- titled simply Earth 2 -- they are actually interesting to read. While New Earth is the home to more science fiction-based characters, Earth 2 is a realm of magic. Alan Scott, Green Lantern, gets his mystical ring from the soul of the Earth (the green energy), and his powers tie him to the Earth itself, allowing him to not only fly and create constructions but also heal the earth of devastation. Aliens aren't a part of his backstory, and at no point do they every try to explain how his magic ring works -- it just does.

Similarly, other characters have their backstories tweaked. Jay Garrik becomes the Flash with Mercury (the Roman god) gives over his power -- Mercury was dying and he had to give the powers to someone wirthy before they were lost (in a nice touch, the gods all have their Greek names on New Earth, but they use their Roman names on Earth 2).

Hawkgirl Kendra Saunders got her powers (wings and a magic mace) from a magic Egyptian pyramid (they kept her as an Egyptologist and wisely ditched everything tied to space aliens). Doctor Fate also got his powers from the pyramid, but his were caused by a mask with the soul of a long-dead sorcerer inside.

So yeah, it's a different world with a very different feel over on Earth 2. And it works. Because everything is fresh and new, the stories aren't bogged down under all the old continuity. The adventures can start quickly, and we don't have to check in with a roster of 80 heroes (all with ties to each other) just to get to the good bits (BAM! POW!).

They even managed to make the "5 Years of Heroes" story work on Earth 2. See, five years ago (in canon), there was a great war between the heroes of Earth (Superman, Batman, and Wonder Woman, plus Supergirl and Helena Wayne Robin) and Darkseid and his armies of Apocalypse. At the end of the war, the big three (Supes, Bats, and Wondie) were dead and Robin and Supergirl were thought destroyed (although they were sent over the New Earth for their own adventures).

Five years later, though, we have the new heroes coming up (Green Lantern, Flash, Hawkgirl, etc.). Now the world is trying to decide what to do with the new heroes and if their arrival means a new war with Apocalypse. And boom, we have an actual reason to set everything within a set year window (unlike on New Earth) and it gives motivation and emotional stakes to everything the characters do.

It's ironic, really, because for all the reasons why I hate the current reboot of DC continuity (eliminating so much of the characters' stories I like for a "fresh take"), those are the same reasons I think Earth 2 works.

I just wonder how long it will be before DC fucks it all up. Probably right around the next Crisis.