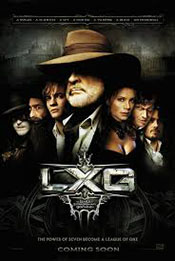 The League of Extraordinary Gentlemen is a group of classic super-powered characters from 19th Century literature brought together to stop of villain from starting a world war. Set in 1899, the league is comprised of people haunted by their past actions and who are ready to use their powers for good and help the world. To put it simply, it is the Dirty Dozen of classic horror.

This movie has been labeled by its critics as one of the worst comic book movies ever created. Fanboys use it as the butt of jokes. Sean Connery fans shake their heads at its name. I listened to these critics and stayed away.

However, "boos" and hisses fade with time, and I decided to give it a try. Therefore, when I watched the movie six years after it came out, I was able to watch it without the prejudice of those who tear down everything they see (not that they create anything themselves).

While the League of Extraordinary Gentlemen is in no way a "great" movie, it does not deserve the slams that it received. For starters, the concept is golden: An Avengers- or Justice League-type group set in the late 19th Century and have them battle evil. Give each of them a small character arc. Make some characters hate each other to build tension. Money in the bank.

The special effects were not ground-breaking, but most of them still look good today. And the sheer volume of special effect shots is staggering. The sets and general movie design do a wonderful job of capturing the feel of 1899 while revealing technology that would be highly advanced for the time.

And believe it or not, the script tries to be a good movie. It gives every major character some development which pulls a group of individuals into a team by the end of the film. There's a lot of cheesy lines in the first half, but that can be forgiven as the movie's style.

But that brings us to the bad thing about this movie, like the acting. The movie has decent actors, but the performances are flat and unengaging. You can blame one or two bad performances on the actors, but when the whole cast delivers poor, it is the director's fault.

You can put a great actor in a great costume, in a great set, with a great script, under great lighting, in front of a great cameraman, but it is the director's responsibility to get a great performance out of the actors. This did not happen.

Editing is something that the average viewer doesn't really notice unless it is bad. Really bad. There is a scene where you watch a character walk away from the camera with no apparent purpose. The middle of the movie is based on a traitor amongst the team, but the movie simply showed the scenes instead of crafting them to build suspense. The ugly seams from special effects to practical effects can usually be fixed by editing (see Jaws and Alien for movies that edited out parts, even whole scenes, where the monster looked fake. Therefore, their special effects still hold up to today's movies).

In the end, the movie deserves the bad reputation that it wears. What it does well cannot overcome the bad. If you don't mind the flaws, it can be an enjoyable ride. If you want high art, stay away.