We talk about the DC Extended UniverseStarted as DC Comics' answer to the MCU, the early films in the franchise stumbled out of the gates, often mired in grim-dark storytelling and the rushed need to get this franchise started. Eventually, though, the films began to even out, becoming better as they went along. Still, this franchise has a long way to go before it's true completion for Marvel's universe. like it's somehow and out of nowhere failure for DC ComicsOne of the two biggest comic publishing companies in the world (and, depending on what big events are going on, the number one company), DC Comics is the home of Superman, Batman, Wonder Woman, and just about every big superhero introduced in the 1930s and 1940s.. "They could have studied what Marvel was doing with the Marvel Cinematic UniverseWhen it first began in 2008 with a little film called Iron Man no one suspected the empire that would follow. Superhero movies in the past, especially those not featuring either Batman or Superman, were usually terrible. And yet, Iron Man would lead to a long series of successful films, launching the most successful cinema brand in history: the Marvel Cinematic Universe. and just copied that. The template was there! It would have been easy!" And while all of that is true, I think the problems with DC's movies are much more systemic. While the MCU was building up DC wasn't just resting on their laurels. The put out Christopher Nolan's run of BatmanOne of the longest running, consistently in-print superheroes ever (matched only by Superman and Wonder Woman), Batman has been a force in entertainment for nearly as long as there's been an entertainment industry. It only makes sense, then that he is also the most regularly adapted, and consistently successful, superhero to grace the Silver Screen. films, which were well regarded, but they also had a bunch of other films they released over that time. It wasn't that DC ignores the template that Marvel made, it's that Marvel came out of nowhere while DC had been making films for years and had a system already in place. 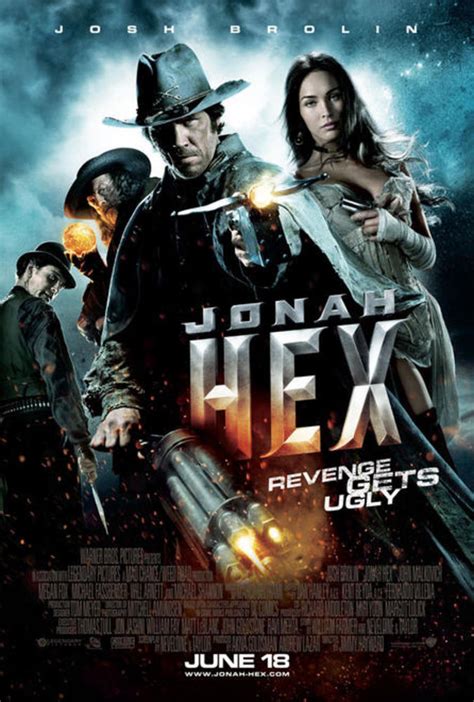 Bear in mind it wasn't just the Dark Knight films they had going. They released The League of Extraordinary Gentlemen (which was bad), The Losers (which was okay), V for Vendetta (which I like even if not everyone does), and even more: Constantine, Catwoman, Green Lantern, Red, and Road to Perdition (and that doesn't get into the constant releases from the DC Animated Movie UniverseWhile DC Comics was amping up production on this big "MCU-killer", the DC Extended Universe they were also quietly putting together another shared movie continuity, the DC Animated Movie Universe. This series was more closely related to the comics, directly adapting a number of famous storylines to, arguably, better effect than the live-action movies could.).

Marvel didn't have many movies they made, selling the rights to X-MenLaunched in 1963 and written by Stan Lee and Jack Kirby, the X-Men featured heroes distinctly different from those featured in the pages of DC Comics. Mutants who didn't ask for their powers (and very often didn't want them), these heroes, who constantly fought against humans who didn't want "muties" around, served as metaphors for oppression and racism. Their powerful stories would form this group into one of the most recognizable superhero teams in comics (and a successful series of movies as well). and SpidermanSure, DC Comics has Batman, Superman, and Wonder Woman, but among the most popular superheroes stands a guy from Marvel Comics, a younger hero dressed in red and blue who shoots webs and sticks to walls. Introduced in the 1960s, Spider-Man has been a constant presence in comics and more, featured in movies regularly since his big screen debut in 2002. before finally attempting the MCU, but DC was there the whole time, making a constant stream of movies to try and see what stuck. Most of them were bad, for one reason or another, but they had a pipeline that ran through Warner Bros. (their corporate parent) and their system was well and truly entrenched. Marvel made a lot of good films after the start of their run with Iron Man, but DC was there the whole time (before, during, and after) continuing to crank out their films... most of which, yes, sucked.

And we can add yet another stinker onto the pile: 2010's Jonah Hex. This fantasy-western came out to little fanfare and died a quick and inglorious death at the Box Office (making only $11 Mil against a $47 Mil budget). All that blame does rest on this film which miscalculates just about everything -- the "star power" of a western superhero barely anyone had hear about, the Box Office clout of stars Josh Brolin and Megan Fox, and how much people would care about superheroes not set in the modern world -- but in the end the reason this failed was because DC made a bad movie, through and through, and they'd done plenty of times before while Marvel slowly got their act together before bursting onto the scene.

It's not that Jonah Hex is unwatchable; it's actually a pretty decent little lark for what it is, but the film really doesn't amount to much of anything. The reason it works is because of its lead actors -- Brolin as Hex, Fox as "hooker with a heart of gold" Lilah Black, John Malkovich as Confederate General Quentin Turnbull -- who all act the crap out of bad material. The film though has a criminally short script berefit of much in the way of twists, turns, or character development. That, coupled with cheap-looking special effects and lack-luster action, makes for a movie that very much fails to live up any expectations viewers might have had for it. 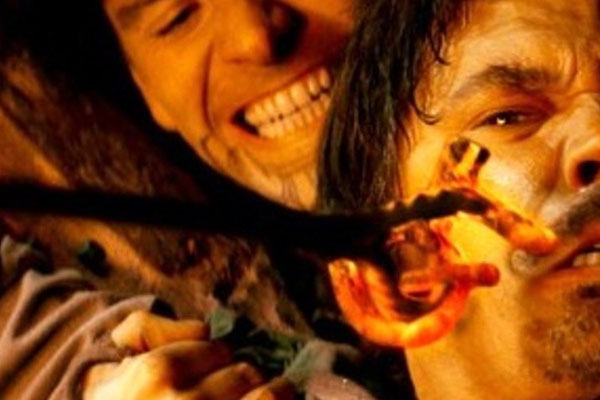 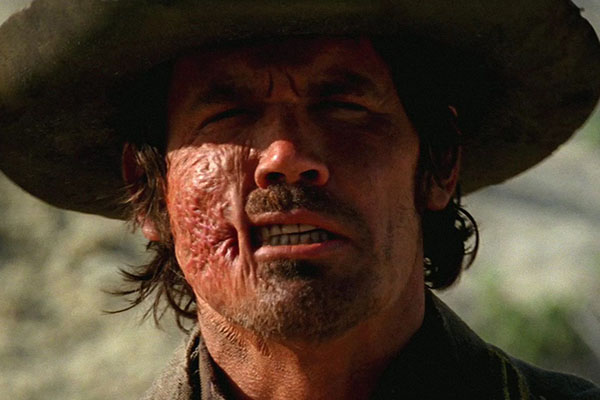 In the film we catch up with Hex six years after the end of the Civil War (he was on the side of the South). He works as a bounty hunter, catching criminals dead or alive (but probably dead) and bringing them back for rewards. In between these little missions he meets up with working girl Lilah and the two have a pretty good thing going (she likes him as he's the only "john" that actually respects her) and if Hex were willing she'd get on the road with him for greener pastures. Hex, though, has a dark past, one tied up in his betraying his regiment because he wouldn't follow a bad order. He killed his buddy, Turnbull's son, and this put him under Tunrbull's ire. In response, Turnbull burned his wife and son to death and made Hex watch. Since then, Hex has refused to get too close to anyone because, "people close to me tend to die."

He gets pulled out of his funk, though, when news of Turnbull's location comes around. Hex thought Turnbull died in a different fire and stopped chasing the man, but Turnbull is very much alive and, worse, still looking to further to goals of the South (despite the fact that they lost). He's stolen the plans for a Union "nation killer" doomsday weapon and he plans to build it and set it on the Union, to cause as many casualties on the Yankees as he can and strike a blow for old Dixie. It's up to Hex to chase doen Turnbull and put an end to his machinations once and for all.

Some parts of this film do work. Malkovich and Brolin are charismatic, solid actors and the scenes they share, villain and hero, crackle. The movie layers on a lot of development between the two so you get the animosity between them. Admittedly it probably does this too much, spending a lot of time going over, again and again, the scenes where Turnbull kill's Hex's family until the audience starts to tune out, but at least we understand what's going on between these two. When Hex finally gets to face off with Turnbull it does feel satisfying.

Sadly none of the other characters get this kind of development. Whatever we know about the relationship between Lilah and Hex is told entirely between the chemistry of the actors, Fox and Brolin, because none of it is in the script for the film. We don't know why Lilah likes Hex so much, what happened in their past that she's grown an attachment for him. She doesn't like to be "owned", which she tells another john, but she'd be willing to throw her whole life away and settle down with Hex and we don't ever really understand why (because he's a cold, kind of dickish dude). That lack of development plagues everyone in this film, from Turnbull's second-in-command, Burke (Michael Fassbender), to the lieutenant on the Union side, Grass (Will Arnet), and Hex's armorer/blacksmith, Smith (Lance Reddick). We need more for all these guys and while they're well acted they remain shallow characters propped up with no understand of why they chose the side they're on. 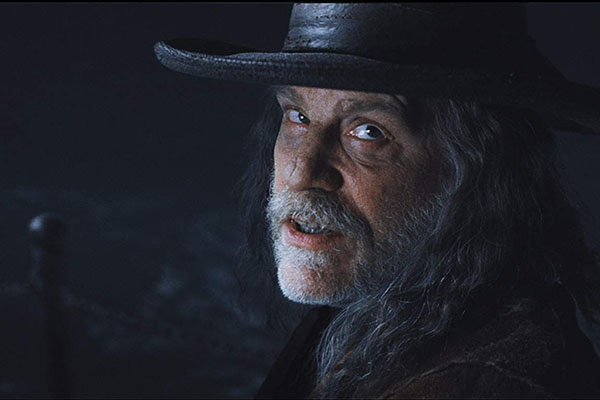 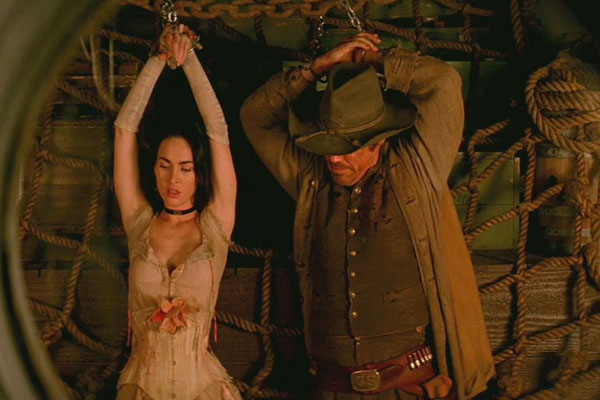 And then there's the action, which is a sloppy, choppy affair. The film hired people that could act, which was smart, but none of them are stunt performers. To get around this the film chops and chops and chops up the action, making it hard to follow what's going on most of the time. A simple fistfight between Hex and Burke requires five cuts for a single punch, with the camera dunkenling staggering around to get every angle. It's hard to watch, and harder to understand, and you end up not caring about any of the action pieces because you can't follow them at all. You long for the film to settle down and get back to the acting, even if that's only marginally better in the long run.

In all respects this is just an expensive misfire for the studio. There aren't any stories of the film having a trouble production of the studio trying to cut its losses and strip the budget down to recoup costs, so this just seems like a movie that was bound to be bad, willingly made by Warners and DC and they thought it might turn out good. Which gets us back to the original point: it isn't that DC couldn't see what was going on around them. They had plenty of evidence about what worked and what didn't through a decade of X-Men and Spider-man films, along with the start of the MCU, and they'd seen their own failures (all of which we recounted above). They had all that and they went ahead and made Jonah Hex anyway. The problem is just that DC is bad at making live-action films, and they keep struggling to get it right.