Always Landing On Her Feet

Despite showing up in several BatmanOne of the longest running, consistently in-print superheroes ever (matched only by Superman and Wonder Woman), Batman has been a force in entertainment for nearly as long as there's been an entertainment industry. It only makes sense, then that he is also the most regularly adapted, and consistently successful, superhero to grace the Silver Screen. movies (like... most of them?), CatwomanOnce a thief (but a pretty damn good one) and rogue of the Bat-man, Catwoman went from villain to anti-hero as she found love with the man that once pursued her. hasn't really had a good solo showcase to call her own. Yes, there was the awful Halle Berry Catwoman from 2004, but that film barely counts. Instead, it's taken until 2022 to get the character her own solo movie (after years and years of her having her own solo comic). And, gotta say, for this first real effort, it's pretty good. 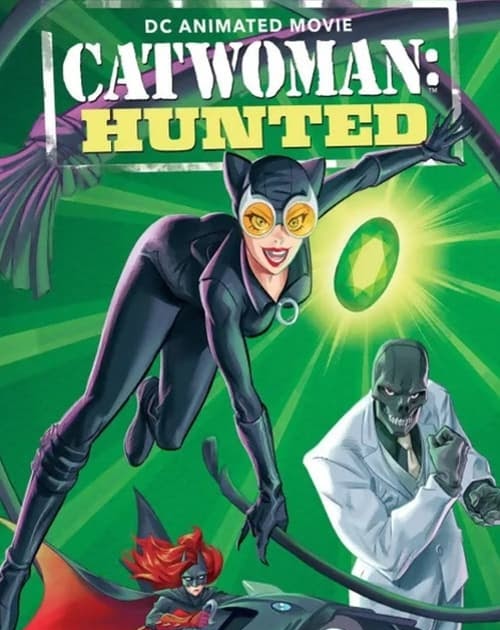 Now, calling this film a true "solo adventure" is a bit of a misnomer. Her name is on the package, and she is the lead character, but she shares center stage with one of the Bat-family, just not the Batman himself. Instead, this film features a paring of Catwoman and BatwomanTechnically the second woman to officially bear the name "Batwoman", Kate Kane was inspired by Batman to use her own resources, and training, to defend the night., leading to a pairing that while still feeling familiar (it is a Bat, with all the gadgets and the Tumbler bike and everything else you expect), it's also a refreshingly new take on the Cat/Bat pairing. Plus, we get a lot time with a lot of ladies without any dudes getting in the way. What's not to like about that?

In the film, Catwoman, aka Selina Kyle (voiced by Elizabeth Gillies), manages to sneak into a fancy costume party on the arm of Black Mask (Jonathan Banks). He's there to buy his way into Leviathan, a super secret organization of the top, most powerful criminals. Selina, under whatever false identity she used to get with Black Mask, is there simply to steal the Cat's Eye Emerald that Black Mask is using to purchase his admission. Her crime perfectly orchestrated, Selina gets into the vault, gets the emerald, and is ready to sneak back out when a batarang sets off the alarms and puts her in a race to escape the clutches of Leviathan and everyone at the party.

Now on the run, with hired assassins after her to make an example of her for the theft -- which, we should note, Batwoman foiled, leaving the emerald in the hands of Leviathan's enforcer, Tobias Whale (Keith David) -- Catwoman gets picked up by Batwoman (Stephanie Beatriz). Batwoman, with the backing of Interpol, offers Selina a choice: help her take down Leviathan or go to prison for all the things she's stolen for the last year (and, for reasons only Catwoman knows, she's stolen a lot recently). She agrees, and this sends the Cat and the Bat on an adventure in Spain to save her skin and stop a truly evil organization.

While other films from DC ComicsOne of the two biggest comic publishing companies in the world (and, depending on what big events are going on, the number one company), DC Comics is the home of Superman, Batman, Wonder Woman, and just about every big superhero introduced in the 1930s and 1940s. have tied into one continuity or another (DC Animated Movie UniverseWhile DC Comics was amping up production on this big "MCU-killer", the DC Extended Universe they were also quietly putting together another shared movie continuity, the DC Animated Movie Universe. This series was more closely related to the comics, directly adapting a number of famous storylines to, arguably, better effect than the live-action movies could. or the new one started with Superman: Man of Tomorrow), this film appears to take place in it's own side-world. The story doesn't tie into anything, there's no grand world events we have to know about, and nothing here seems to be building to some big, overarching story we'll see across several other films. It's a nice, self-contained movie, and that helps it a lot. 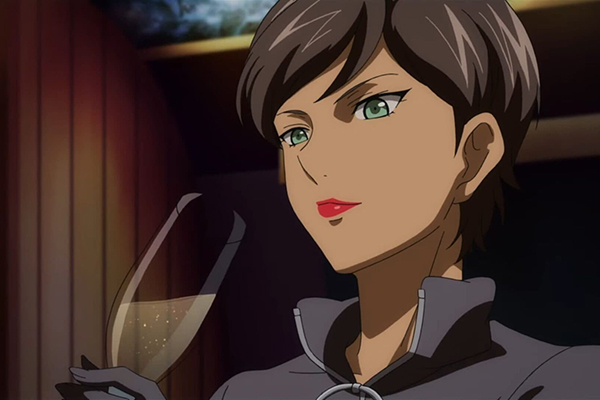 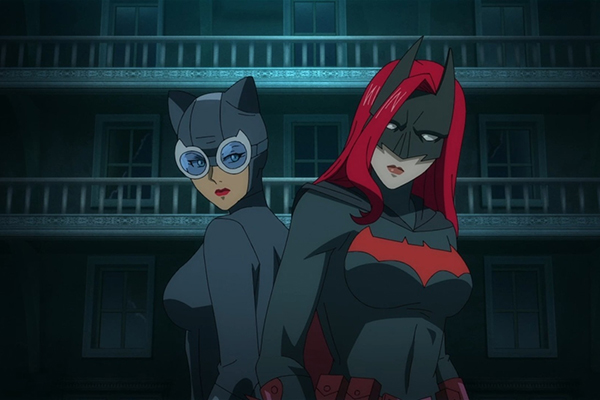 Don't get me wrong, I like DC's big stories. I like seeing the characters evolve from one movie to the next, their voice actors carried over as their storylines develop. At the same time, though, it's nice to just be able to shut off your brain and watch a rip-roaring adventure without thinking too hard about continuity. Everything you need to know about this adventure takes place in this adventure (including the opening titles), and once the film is over you don't have to worry about what comes next. It's pretty nice.

Not that I'd mind seeing further adventures of Catwoman in this continuity. Honestly, this is probably one of the most enjoyable superhero adventures to come out of DC in some time, and it's all thanks to Catwoman. Her character is quippy and fun, with the Cat getting all the good lines. She'd light, she's funny, and even when the movie puts her in serious danger, she never loses her sense of fun. This movie came out on home video one month before the release of The Batman, probably to tie into that movie (as Catwoman is in both), but these films feel like night and day when you compare them (and the comparison does The Batman).

When I reviewed The Batman, I discussed the fact that the film seemed so caught up in "saying something" that it lost all sense of fun in the process. These are superhero films so while they can make statements there still has to be some sense of adventure to them. What's the point of doing something with superheroes if the super-heroic part is barely featured? Catwoman: Hunted actually does have something to say (there's a B-plot all about how Catwoman broke up a white slavery ring) and yet it also have the zippy adventure a superhero (superheroine) movie needs. This is what I want in my cape-and-cowl adventures.

Now, whether or not Batwoman was really needed here is another matter. While I like the character in general, and appreciate that this isn't just another Catwoman/Batman story, she feels like she could have been any superhero serving with Interpol for this adventure. The aspects of Batwoman you think of -- her identity as Kate Kane, her family life, the things she needs and desires -- are never explored here. Make her Batgirl, Artemis, Spoiler, or any one of a number of superheroes that rely on weapons and gadgets instead of super-powers, and this film would play out exactly the same. She is gamely voiced by Stephanie Beatriz, but in practice Batwoman is undeserved here. 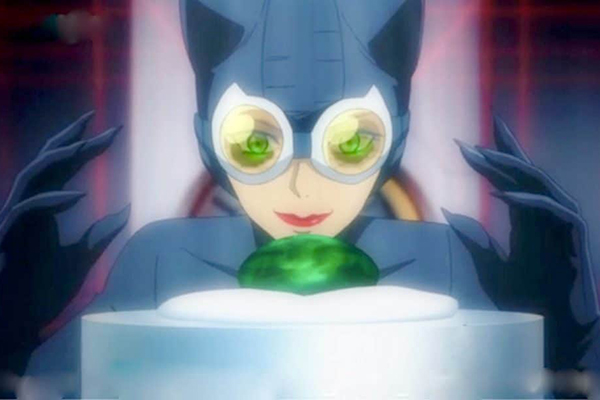 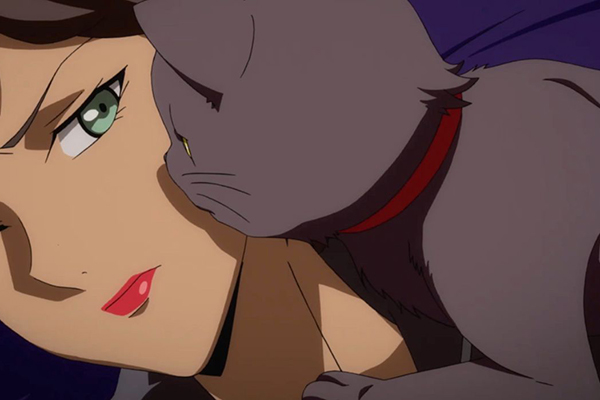 The only thing that Batwoman is really here for is some sexual tension with Catwoman (as the Cat toys with her) and some potential T-and-A. This is an anime style film (specifically done by a Japanese animation studio), and all the ladies in the movie are pretty and busty with but anime-girl eyes. It's all a bit sexual at times (even when Catwoman isn't making it more sexual), and you get the vibe that, with a different director and studio Catwoman might have been teamed up with a male Interpol agent. On the one hand I do like the inclusions of so many women (heroines and villainesses), but damn guys, maybe keep it in the pants a little more.

It's a minor quibble, though, as the sexy factor isn't that big. It certainly doesn't ruin an otherwise enjoyable movie. This is just a fun, amusing ride with a solid story behind it. Best of all, you get a good sense of who Catwoman is as a character, better than just about any other film so far has managed. She's fun, she's fleet, and she's claws. This is a superheroine I want to watch again.