When we discussed our last entry in the DC Animated Movie UniverseWhile DC Comics was amping up production on this big "MCU-killer", the DC Extended Universe they were also quietly putting together another shared movie continuity, the DC Animated Movie Universe. This series was more closely related to the comics, directly adapting a number of famous storylines to, arguably, better effect than the live-action movies could., Reign of the Supermen, we touched upon the fact that the DCAMU has a tendency to rush through storylines. While I praised The Death of Superman for taking a short story and fleshing it out, giving us a lot of character moments and new details, its sequel took the opposite tack, cramming a ton of story into a short film. This is hard problem to tackle in a series of films where most adventures have to be single, self-contained movies, and the same issue, unfortunately, betrays the newest BatmanOne of the longest running, consistently in-print superheroes ever (matched only by Superman and Wonder Woman), Batman has been a force in entertainment for nearly as long as there's been an entertainment industry. It only makes sense, then that he is also the most regularly adapted, and consistently successful, superhero to grace the Silver Screen. film in the series, Hush. 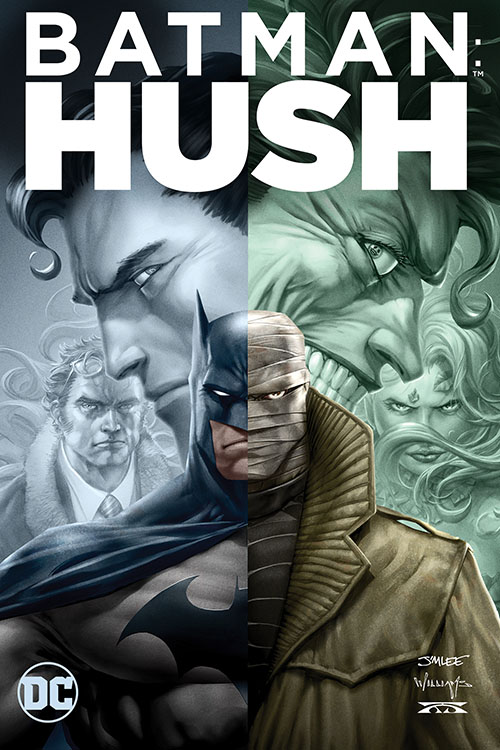 In Batman: Hush, the Dark Knight is stalked by a masked killer, someone that shows up at the scenes of other crimes and seemingly is pulling the strings of all of Gotham's greatest villains. It starts with a showdown between Batman and Killer Croc over the life of a kidnapped boy, then follows Catwoman stealing the ransom to take it back to, of all people, Poison Ivy. The plots then pull in Clayface, Riddler, and Harley Quinn, but behind it all is that mysterious, masked man. It seems like this man, named Hush, wants to make Batman suffer, to toy with him over and over until the Bat succumbs to his misery and cracks. And yet, while this masked villain taunts Batman from one side, Bruce Wayne finds himself growing closer to Selina Kyle/Catwoman, with the two of them teaming up to try and track Hush down before his final plan can reach fruition. Can Selena balance Batman, making the two of them stronger together, or will Hush win and destroy them all?

Originally told in Detective Comics, "Hush" is considered one of the great story arc of the Dark Knight's long run. It's a twisty bit of storytelling, released month after month, that played up the mystery of its villain while building to a proper pay-off that felt satisfying and complete. Any attempt at adapting this work would have to be sure to get the details right -- the point of the story is build the tension, to keep the viewer guessing, right up until the end when all the pieces fall in place and the real game (and killer) is revealed. It's like an Agatha Christie story in that regard.

Unfortunately that building tension that the original comics were able to craft is missing from the DCAMU adaptation of Batman: Hush. While many of the same story beats are there, the film doesn't take time to let the plot grow, to let the tension build. Instead, like many other superhero films, Hush simply rushes from point to point, getting through all the key events of the comic series without taking the time to let anything sink in. Instead of a tense and fraught mystery, Hush plays out like some many other entires in the DCAMU, full of animated spectacle but light on story.

The best part of Hush, honestly, is also the part that hurts it most: Catwoman. The love story between Bruce and Selina was a major part of the "Hush" storyline, a part of the plot to keep Bruce grounded and hopeful while the darkness of Hush constantly nipped at his heels. I like this storyline, both in the comics and in this movie, as it humanizes Batman further and gives us insight into the man under the mask. It's like the story between Clark and Lois in The Death of Superman in that regard, but while that movie took a very short story and used the love story of the lead characters to flesh out the meager plot, Hush has an overabundance of story that it shunts aside to focus on Bruce and Selina instead. 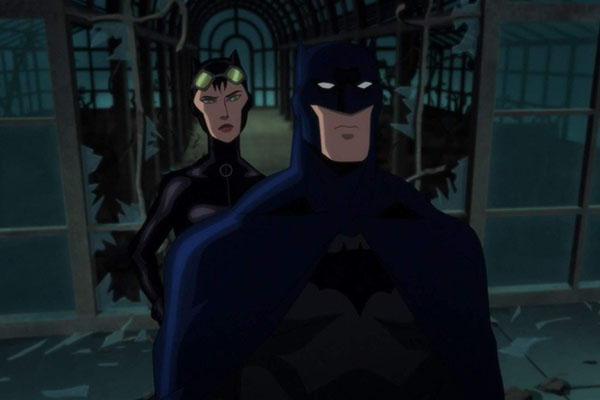 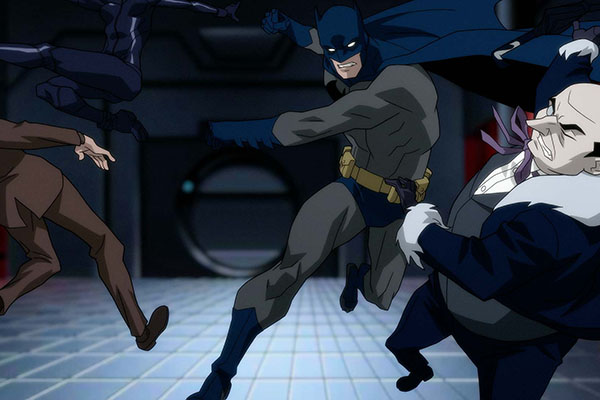 Don't get me wrong, the pairing of Batman and Catwoman is great, the dark avenger of the night and the reformed nemesis that becomes his greatest love and ally. How can you not like that? But it's a story that needs to be the focus of a movie to really sell it, with it taking over whatever story its placed into. In the case of Hush, the Batman/Catwoman pairing becomes the dominant story, shoving aside so much of the mystery of Hush that the main villain of the story ends up feeling like an afterthought. I really liked the exploration of Batman and Catwoman (especially since this is the first time the Cat has shown up in the DCAMU) but I do wish that more of Hush could have been dedicated to Hush.

The problem with Hush is that the villain never really grows to feel like a real threat. He appears a few times in the movie, sure, but he never comes across as anything more than some dude in bandages that flees when Batman gets to close. Hush has a rich story, a plot line that intersects with Batman in multiple ways, but because of the short runtime of the movie and the amount of work spent developing the relationship between Batman and Catwoman (good work, even still), that most of the keep details of Hush are lost of omitted in this adaptation. Instead of feeling like a bogeyman that is constantly taunting Batman, Hush just comes across as one more silly masked villain for Batman to face off against and the move on from.

Part of that issue is due to the fact that key details of Hush are changed in this movie. Although I won't spoil the details (in case you want to go back and read the original comics), suffice it to say that identity of Hush is changed in this movie, streamlined probably due to time constraints. The changes both take a way a personal part of the story, making Hush's motivations and his connection to Batman less important, but they also remove much of the reasoning for Hush's plot line The changes effectively rob the villain of his whole reason for being, making him feel less complete, less interesting, less of a threat. The movie tries to make things easier for the viewer to follow but, in doing so, it also ruins its whole reason for being.

And this brings me back to the Batman/Catwoman storyline. I like this plot and I really liked having it in a movie, I'm just not sure if an adaptation of "Hush" was the right place for it, no matter how much it might have been part of the original storyline. Within the hour-and-a-half context of the film, I feel like the love story between Batman and Catwoman is a distraction. I think it would have been better to have their love story happen in a previous film and then, if the producers wanted to tie it into Hush afterwards the heavy lifting would have already been taken care of. This film could have felt like an extension of that previous story, a continuation (and maybe conclusion) of that story that uses the already established relationship as background and motivation for the two of them working together, and color for Hush's master plan. Here, though, it eats up too much time and detracts from the villain. 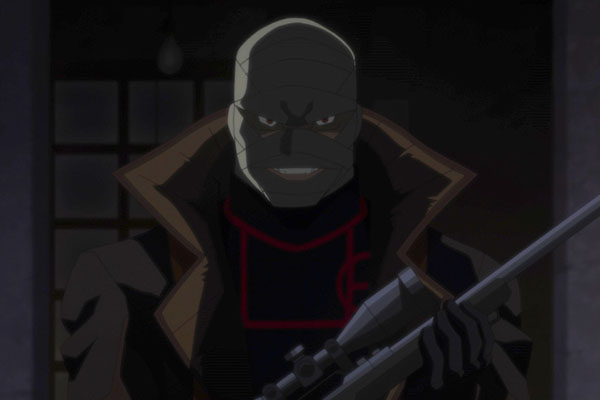 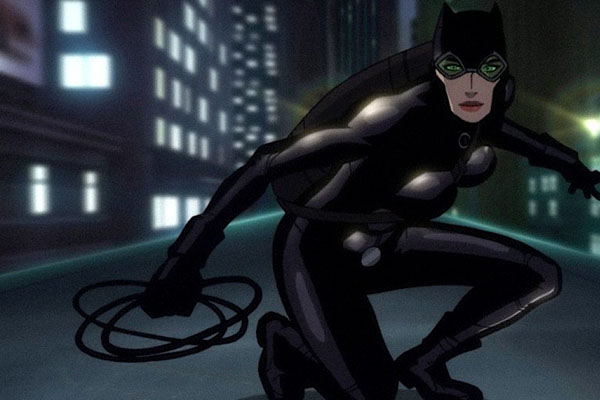 I think a filmic version of "Hush" could work. Sadly, Batman: Hush fails to deliver. Hush needs more a Hush, more time spent on the villain, more development of his story, more reason for his existence. More importantly, the key changes they made to the story need to be reverted in any future adaptation so that the whole reason for Hush's existence actually makes sense. This adaptation is a noble effort, but to really sell the story it either needed to be an hour longer or needed to ditch some other storylines to make the villain the real focus of the movie. This movie tries but just can't bring it all home in the end. Hopefully the next time the DCAMU adapts a big Batman story (maybe "The Long Halloween") it can take the time to do it right.