The Crazy Comes Back to the Nuthouse

So here's something I don't understand about the Suicide Squad, the DC ComicsOne of the two biggest comic publishing companies in the world (and, depending on what big events are going on, the number one company), DC Comics is the home of Superman, Batman, Wonder Woman, and just about every big superhero introduced in the 1930s and 1940s. supervillains made to be superheroes team: what missions are these guys actually better suited for than a group of trained soldiers? I know they're supposed to be able to "fight the threats that mortals can't battle," but every film we've seen of them the Squad is about as effective as any other group that could have arrived. Yes, some of them have super-powers, but it's a rare mission that actually uses their powers to solid effect. 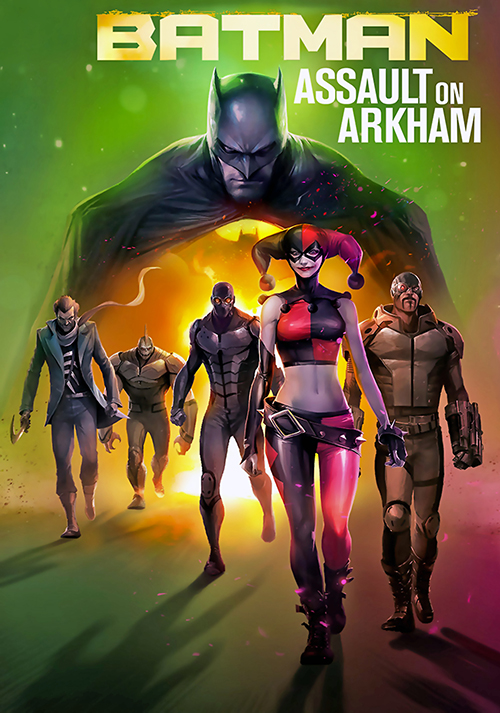 This was something I thought about while watching Batman: Assault on Arkham, a Batman: Arkham series tie-in that really acts as a back-door pilot for the Suicide Squad. That wouldn't be so interesting on it's own except that it serves as a nice precursor not only for the other (unrelated) Suicide Squad films to come out after -- the 2016 Suicide Squad and the even better Suicide Squad: Hell to Pay -- but also because the Suicide Squad will eventually get their own game (in 2020) set in the Batman: Arkham universe. That's pretty cool.

Sadly, on its own this first Suicide Squad film really doesn't work. The film ends up serving too many different masters -- setting up the Squad, introducing the concept, tying in BatmanOne of the longest running, consistently in-print superheroes ever (matched only by Superman and Wonder Woman), Batman has been a force in entertainment for nearly as long as there's been an entertainment industry. It only makes sense, then that he is also the most regularly adapted, and consistently successful, superhero to grace the Silver Screen., justifying it within the universe DC has set in the games. It all ends up feeling just about as schizophrenic as the hated DC Extended UniverseStarted as DC Comics' answer to the MCU, the early films in the franchise stumbled out of the gates, often mired in grim-dark storytelling and the rushed need to get this franchise started. Eventually, though, the films began to even out, becoming better as they went along. Still, this franchise has a long way to go before it's true completion for Marvel's universe. film, with many of the same issues plaguing it as well. As a "pilot" for the team, this film misses the mark by a fair margin and ti took DC quite a while to learn their lessons from it.

This animated film, like the 2016 live-action movie, opens with a montage that establishes each of the characters that will be on the team: Deadshot (Neal McDonough), Harley QuinnCreated to serve as "Joker's Girlfriend" as well as his primary minion for Batman: The Animated Series, Harley Quinn quickly grew to be one of the most popular characters of that show, eventually finding a solid life beyond the cartoon in comics, movies, and media. (Hynden Walch), Captain Boomerang (Greg Ellis), Black Spider (Giancarlo Esposito), King Shark (John DiMaggio), Killer Frost (Jennifer Hale), and (greatest villain of them all) KGBeast (Nolan North). This crew is hauled in from the various institutions they're in or crimes they're actively committing at the time. Implanted with bombs in their necks, they're sent out by head of "Taskforce X", Amanda Waller (CCH Pounder). Their job is simple: get into Arkham Asylum and find the Riddler's cane. The cane has Riddler's thumb drive and Ridder stole sensitive information before he was sent to the asylum. An easy in-and-out mission.

Or, it would be if things didn't, predictably, go right off the rails. Pretty early into the mission Harley sees JokerOne of Batman's first villains, and certainly his more famous (and most popular), the Joker is the mirror of the Bat, all the insanity and darkness unleashed that the hero keeps bottled up and controlled. and (accidentally or not) gives him the opportunity to escape confinement. Each of the members of the team has reasons from wanting to escape and everyone has a double-agenda. And that doesn't even take into account the fact that Riddler is on Waller's hit list because he knows how to deactivate the bombs so the team can escape her control. Oh, and Batman is still out there, and if he arrives he won't be too happy to see this Suicide Squad. It's a complicated mission that only gets more complicated as it unfolds. 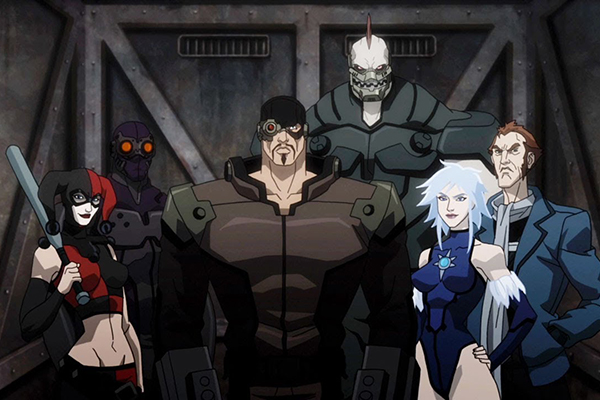 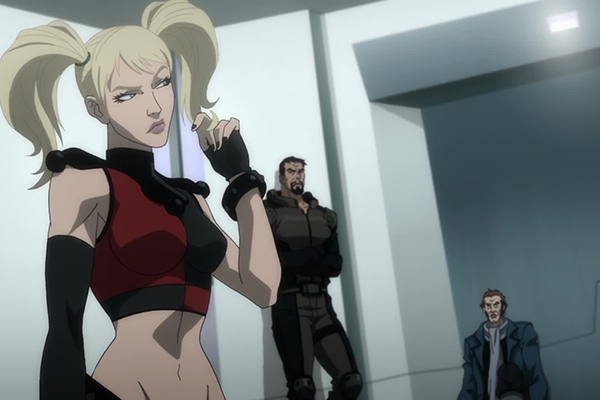 The big issue with Suicide Squad is that it spends a long time on matters that don't actually affect the story directly. The plot is supposed to be about getting into Arkham, getting the information Ridder has, and then getting out. But, like a kid with ADHD hopped up on sugar, Assault on Arkham constantly gets distracted by whatever other thoughts it has, barely focusing on the main story. At a certain point I totally forgot what the villains were even doing there and just watched them cause carnage and faff around for a while.

This is compounded by the fact that the villains never actual grow into real characters. Although there are feints towards their backgrounds -- Deadshot has a kid that he loves, Harley was a doctor in a former life, KGBeast is a beast -- these factoids are tossed out and then ignored for whole swaths of the film. Instead, the villains are just sent to run around and quip a bunch without ever deepening into real characters. It's hard to care about Deadshot, or Captain Boomerang, or Killer Frost when they aren't given any real development. What drives Killer Frost? We never know because all we know about her is that she has cold powers and she's sexy.

This last part is actually a really strange fact that the film keeps harping on. Harley and Killer Frost are put in one situation after another where they find themselves doffing their clothes and parading around naked. We don't see anything, mind you (just the ladies from behind, waist up, with maybe only a feint of side-boob), but the film certainly revels in putting the only two ladies on the team in situations where they have to be naked to distract guards and get ahead. The guys never have to do this, it's just the ladies that use their "assets", and the film willingly leers at them every time.

I've played through a couple of the games (at least most of the way) and it doesn't really feel like this film fits into thee scope of those games. Yes, thee focus is on characters other than Batman, which is one big change, but the lack of focus on the story, the constant bopping around while leering at the villain-women seems out of place considering the universe this is supposed to be in. True, the games do have plenty of non-linear content and side-missions to perform, and they aren't without their own bit of male gaze (Catwoman's outfit sure is skin-tight, but then isn't it always?). Still, this movie seems a poor fit for the universe of Batman: Arkham. 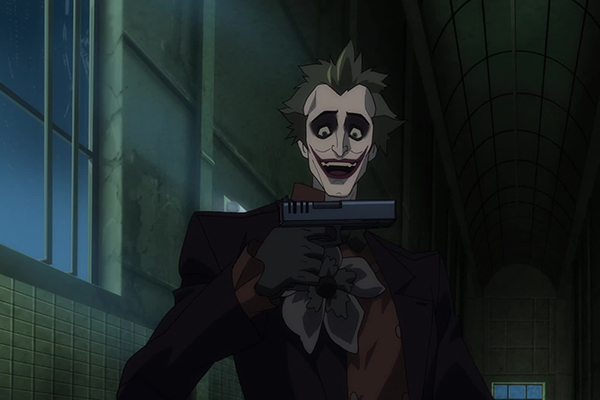 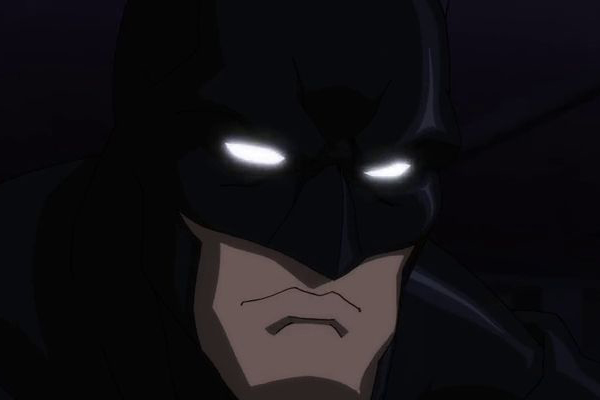 Just all around this film feels like an unfocused, poorly thought out effort. It certainly has plenty of talent involved, including Kevin Conroy as Batman, but the film itself just can't settle down and tell a proper, focused story. It careens, it bounces, or leers, and then it gets distracted but it never just tells a solid story about the Suicide Squad. If what you want is a movie that does this team justice, there are other efforts much more attuned to your desires. But whatever your reason for coming to this film -- Harley Quinn, the Suicide Squad, or love of the Batman: Arkham games, this film is going to leave you feeling cold. Colder, even, than Killer Frost.