Rock Out With Your Shotgun Out

I want to be clear, I enjoyed 2021's The Suicide Squad stealth reboot. It was a massively improved movie over the previous Suicide Squad film, powered in large part by the awesome direction and artistic vision of James Gunn. It was hyper-violent and really weird, but that's pretty much right up Gunn's wheelhouse. DC ComicsOne of the two biggest comic publishing companies in the world (and, depending on what big events are going on, the number one company), DC Comics is the home of Superman, Batman, Wonder Woman, and just about every big superhero introduced in the 1930s and 1940s. gave the director carte blanche to make whatever movie he wanted and The Suicide Squad was exactly what they got. While it wasn't a massive success, releasing in the middle of the pandemic and saddled with an R-rating, but DC seemed quite pleased with it, enough so to give Gunn a spin-off TV series. 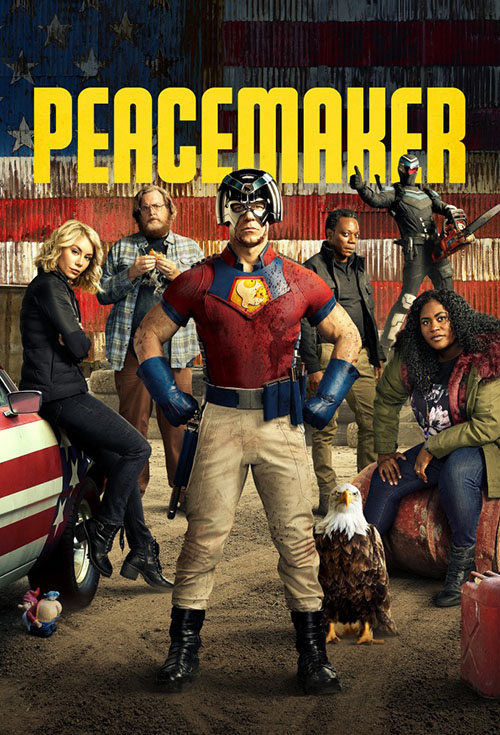 Thing is, you have to be on board for Gunn's very specific vision of the DC Extended UniverseStarted as DC Comics' answer to the MCU, the early films in the franchise stumbled out of the gates, often mired in grim-dark storytelling and the rushed need to get this franchise started. Eventually, though, the films began to even out, becoming better as they went along. Still, this franchise has a long way to go before it's true completion for Marvel's universe. to enjoy his spin-off series, Peacemaker. Gunn's DCEU (which, if the rumors are true and he does become the visionary for the whole cinematic universe) is very different from the Marvel Cinematic UniverseWhen it first began in 2008 with a little film called Iron Man no one suspected the empire that would follow. Superhero movies in the past, especially those not featuring either Batman or Superman, were usually terrible. And yet, Iron Man would lead to a long series of successful films, launching the most successful cinema brand in history: the Marvel Cinematic Universe.. Marvel's movies are bright and happy and have a certain whiz-bang hopefulness that you'd expect from, say, SupermanThe first big superhero from DC Comics, Superman has survived any number of pretenders to the throne, besting not only other comic titans but even Wolrd War II to remain one of only three comics to continue publishing since the 1940s. and not the comic group that brought us "Days of Future Past" and "Age of Apocalypse". Yet somehow DC is the one putting out dark and violent movies while Marvel has become the bright and happy candy-colored filmmakers. It's a weird time we live in.

I mention all this because Peacemaker is not going to appeal to everyone. Hell, the same people that were likely turned-off by The Suicide Squad are also going to tune out of Peacemaker, no matter how much this series might tie into the DCEU (and with cameos from The FlashStruck by lightning while working in his lab, Barry Allen became a speedster known as The Flash, launching an entire set of super-fast superheroes. and AquamanRaised by his fully-human father, Arthur Curry has a history even he didn't know about until he grew: that he was the half-human, half-Atlantean son of the once-Queen of Atlantis, and was destined one day to be it's rightful ruler, the Aquaman. it very much does tie in). My wife tuned out on The Suicide Squad very early into that film and she had to same reaction here with Peacemaker. No matter how funny and action-packed this series might be there are plenty that just aren't going to jam on it. It's best to know that going in.

The series picks up some time after the events of The Suicide Squad (this shows direct predecessor in the DCEU). We find Peacemaker (John Cena) just getting out of the hospital after the building fell on him, and now that no one is after him he feels comfortable enough to go back to his old life, living in a trailer with his pet eagle Eagly (voiced by Dee Bradley Baker). His father, Auggie Smith (aka super villain White Dragon, played by Robert Patrick), hates his guts and only tolerates him being around. Still, Peacemaker (aka Chris Smith) is happy to be alive and do as he likes.

At least that's his plan until he's forcibly enlisted into A.R.G.U.S. That black ops organization has their own even blacker ops group, Project Butterfly, that are working the case of a very serious threat to the world. As we learn, an alien species, the butterflies, came to the world years ago but recently they've been working their way into the highest levels of government. These parasites are able to invade the brains of humans and take them over, controlling them (but effectively killing the host). Peacemaker is needed because he's willing to kill anyone to save the world, and considering all the people infected by these parasites, that could mean a lot of killing. He's just the man for the job. 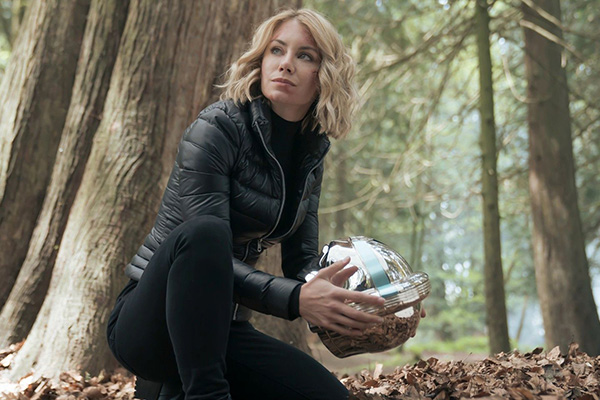 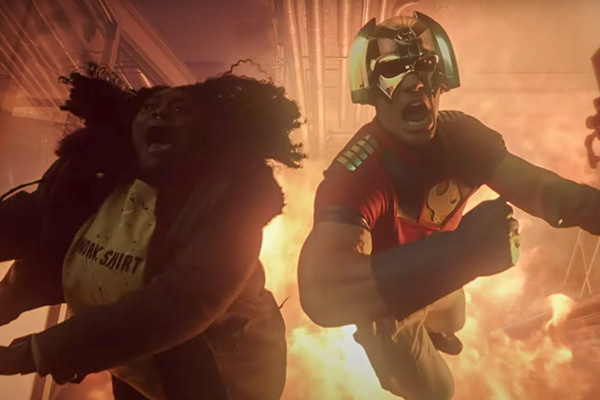 As a direct sequel / spin-off from The Suicide Squad, Peacemaker shares a lot in common with that movie. Naturally there's the cast of characters, not only with Cena's Peacemaker himself but also many of the former Taskforce X crew, including Jennifer Holland's Emilia Harcourt and Steve Agee's John Economos (along with cameo appearances from Viola Davis's Amanda Waller). The tone, though, is also similar, with a lot of blood, guts, and cussing. You'll hear so many discussions about genitals while characters are shooting and fighting, and it's all in good fun. This is a crass and crazy little adventure and it works, in that context, because of it.

Of course, the other thing the series shares with the movie is the subject matter: brain control aliens. In The Suicide Squad we had Starro, the giant brain control alien who send out his little parasites to take over people. Here we have the butterflies which also send out their drones to take over people. Hell, if you watched Gunn's older film Slither which also featured drone parasites that took over people. This is, clearly, a subject Gunn likes to write about. Honestly, by this third time it does feel like he's achieved just the right level of horror and comedy from the subject, and he's done it on a big enough stage. If we get yet another story about brain control parasites from the director after this it might just be too much then, but considering he never got to make a Slither 2 I'm willing to let the series slide on this account. One last time at least.

As for the characters, man, this is a weird and wild ride. Peacemaker was a pretty one-note character in The Suicide Squad, basically being there to act dumb and shoot things. While he does that here, too, he also gets more depth and development as well. Yes, he's a big, dumb lummox, but because we learn about his background, his racist dad, the loss of his brother, and his problems connecting with people, we come to appreciate him more as a person. This show does a good job of taking a villain in The Suicide Squad and turning him into a legit hero (as much as someone like this can be).

Peacemaker is joined by a friend from his past, Vigilante (Freddie Stroma). Vigilante is basically Peacemaker just with even less self-aware tendencies (which is impressive), while also being a lot less buff (not everyone can be a meat mountain like Cena). The two of them act as a nice contrast to the ARGUS agents, helping to up the crass tone (and violence) to suit Gunn's style. Meanwhile new agent Leota Adebayo (Danielle Brooks) helps to humanize the ARGUS side so we can appreciate all the characters better, on all sides of of the law divide. 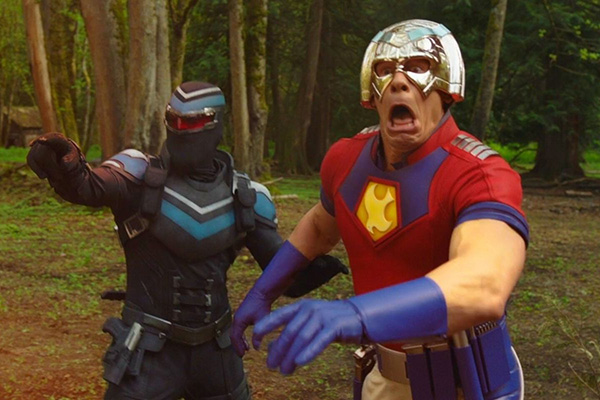 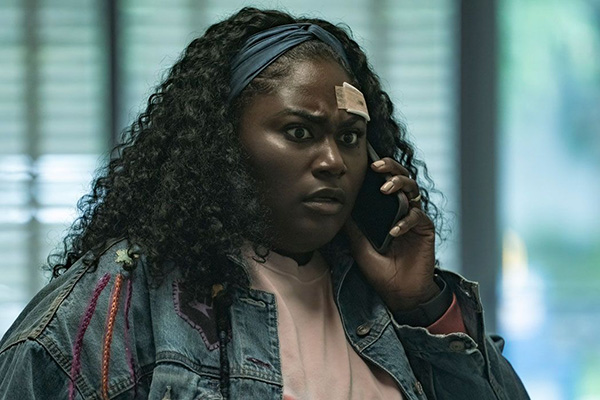 We also have to give special credit to the opening credits of the series, a hilarious dance sequence done by all the actors of the show. The dancing is absolutely goofy, but done with the most stoic of straight faces by all the actors, all while they dance along with some modern hair metal. It's so dumb and hilarious, but compulsively watchable. Not every show has an open credits sequence that's worth watching but Gunn gave us an opening I never skipped once. By the time Eagly flies in (and then misses, then adjusts, his mark) the show has already reached an absurdist level that makes it a true winner.

As I said before, Peacemaker is not going to be for everyone. You had to like the style and tone of Suicide Squad, and you had to want to see another 10 episodes of that kind of material. If you are in the mood for it, though, there is no doubt that this first season of the series provides. The series gives us strange and hilarious continuing adventures for the agents of Taskforce X and it works so well. It at least understand just how weird and silly comic book movies can be and it embraces that weirdness, wearing it opening without any shame.

If Gunn doesn't end up becoming a main figure of the DCEU that franchise will only benefit. Not everyone is going to like Gunn's style but you have to credit him for a singular vision that embraces the weird. Certainly I'll take Gunn's movies and shows over whatever the hell stoic grim-dark storytelling DC is grasping at with Joker and The Batman. Superheros that are actually enjoyable? Yes, please!