Such a Romantic Story

Even when it came out, Slither seemed like an odd duck. An alien invasion movie (with notes of a zombie apocalypse worked in), Slither wasn't a sci-fi/horror film so much as the most over-the-top horror-comedy seen in theaters in a while. It was also the directorial debut of soon-to-be-famous James Gunn (who became a name to know after Guardians of the Galaxy). Before Slither Gunn worked for Troma films, and there's a certain Troma aesthetic at play in this film. It's weird and wacky and, above all, gross. 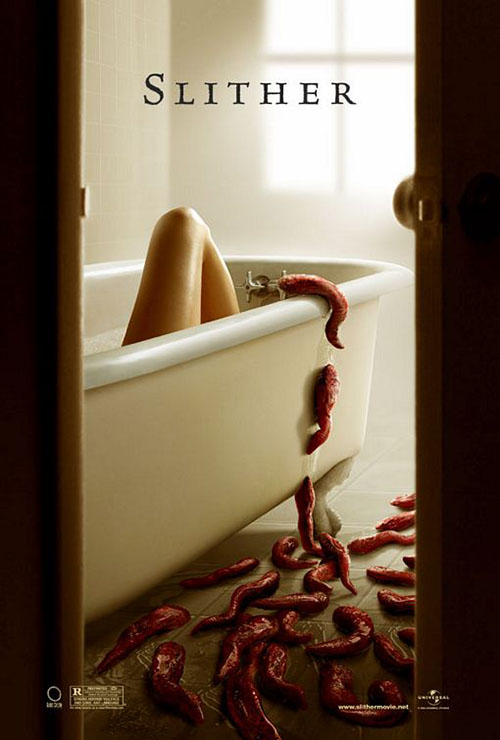 Before we can even talk about the story in Slither we have to first mention just how gross the film really is. It is, at times, quite disgusting -- I watch plenty of horror and there were moments in Slither where I was straight-up disgusted. Not from gore, mind you, but from gross-out gags. But then, that's part of the charm of the movie -- it has a willingness to go that extra mile, to take any strange idea and follow it, further and further, without ever once saying "this is as far as we'll go." There is no line in the sand, no place the movie can't take it's strange concept and push it just a little further.

In Slither, an asteroid lands in the quiet rural town of Wheelsy. The asteroid, although diminutive is stature, holds a nasty secret within: an alien consciousness (that, in physical form, looks like a skittering needle). When local well-off man-about-town Grant Grant (Michael Rooker) stumbles upon the asteroid late one night, he gets the alien needle right to his chest. The alien burrow right into his brain and starts rewiring (and remaking) Grant in its own image. Soon, Grant is killing animals (and collecting meat) all so he can start building his forces. That's because Grant's parasite isn't there just to live but to slowly spread across the whole of the planet, absorbing everyone and everything into its mass.

While this is going on, though, Grant is also having difficulties with his wife, Starla (Elizabeth Banks). They've grown distant over the years and he feels like Starla is starting to really pull away. He's Jealous of her childhood friend (and local chief of police), Bill Pardy (Nathan Fillion), as grant assumes that if Starla leaves him she'll leave for Bill. Now growing into a giant, slithering alien mass, Grant's parasitic worms spread across the countryside, infecting anyone they can, and every single one of his new hosts is in love with Starla (because they're all part of the psychically-connected whole).Starla are going to have to find a way to stop Grant before he spreads too far and takes over the mind of everyone on the world (all of whom would be in love with Starla).

The love story aspect is part of what really sets Slither apart from any other alien invasion movie I've seen. The idea of aliens coming down, taking over people's minds, and spreading an invasion fleet within human hosts has been done before -- hell, this movie has a number of previous films Gunn name-checked in interviews as influences on the story for Slither. But usually when these aliens invade they're impersonal -- they look like us but they don't act like us. Grant, though, is the central heart of the alien menace -- the parasite might have rewired his body but it couldn't rewire Grant's love. Thus, every parasite, every infected person, is after Starla, putting a very personal spin on the zombie genre. 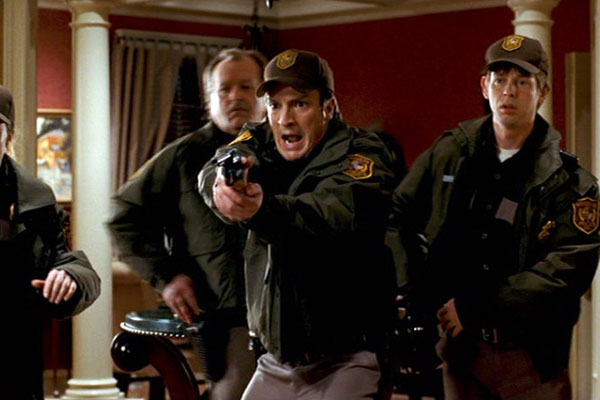 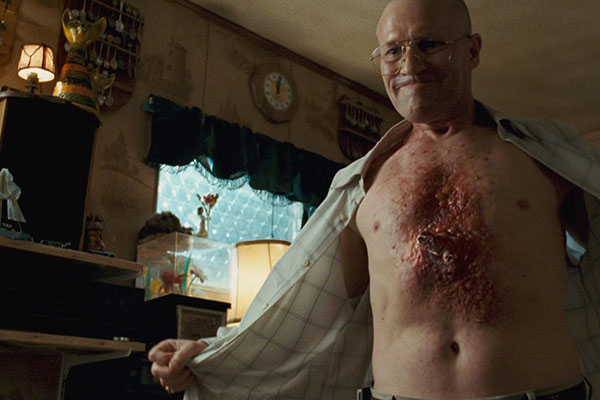 It also helps that the movie constantly goes for broke, regularly reinventing what the parasite is doing to grant and the rest of the town. First Grant is just mildly infected, and then he starts growing tentacles, and then he's using those tentacles to infect other people. The infected people, though, aren't always mindless drones; sometimes they're breeders for mind-controlling slugs. And then the stakes will up again for the drones, and on and on. The movie deftly handles each one of these swerves, conveying the information about what the hell just happened quickly but always in a way that the viewer can quickly grasp (and freak out about).

That's also were the grossness plays as a strength. While the film is absolutely vile at times, it revels in it. It uses its disgusting impulses to make Grant (and his converted humans) seem alien and disgusting, to make them the clear villains. But it also uses them as agents of chaos, to up the scares (and the laughs) from each strange and terrible thing that happens next. The film is constantly able to keep the viewers on their toes, finding new ways to reinvent itself, becoming ickier, funnier, and scarier all in equal measure. It's impressive.

At the middle of it all is Michael Rooker. Rooker is able to ground grant in a way you wouldn't think possible given the subject matter. Even when increasingly covered in prosthetics and makeup, Rooker someone gives a soulful performance. It's great acting (in a way the Academy would never recognize), and it absolutely pulls the movie together. Because of Rooker, Grant, the alien within, and the weird, screwed up love story all work in a way they really shouldn't. This whole movie should be absolutely ridiculous, but Rooker makes it work.

But then he gets a strong assist from Fillion. Of course, ever nerd knows who Nathan Fillion is, star of the short-lived (and eternally beloved) Firefly. Fillion's Bill Pardy isn't that far off from his Captain Malcolm Reynolds from Firefly, both possessing a straight-man quality to react to any strange situation and make it funny. Fillion mines laughs out of the absurd here, giving us someone to attach to as the hero while Grant is quickly turned into the monster of the piece. You feel for Grant and the awful things that he's subjected to, but it's Bill who you root for and that's all because of Fillion. 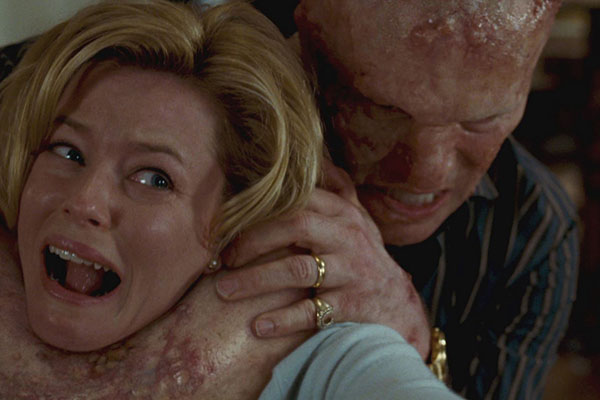 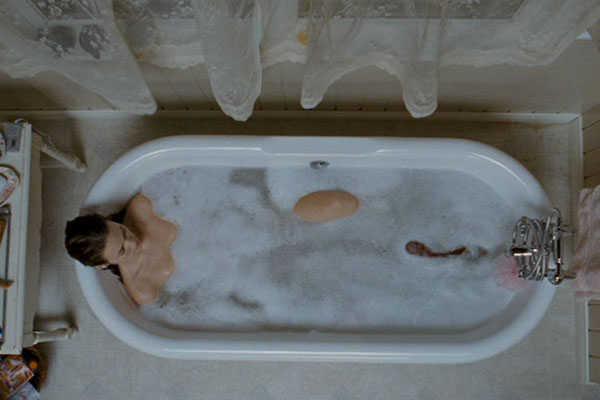 Honestly, Slither walks a tightrope, balancing deftly between horror and comedy. In the wrong hands, with the wrong actors, this movie would be nothing more than B-movie schlock, a terrible film to watch once, laugh at, and never revisit. But this is the James Gunn show here and the man knows how to take the absurd and make it not only believable but also something you cared about. In that regard Slither works as a pilot for what was to come, proving he could take the strangest of concepts (like the Guardians) and mine glory out of the absurd.

Slither is not for everyone. It's a hard-R horror film that gleefully delights in all the awful places it can go. It's gross and disgusting and repulsive, and it wears those qualities as badges of honor. It's film that, with a smaller budget, would have been released direct-to-DVD by Troma films and no one would have batted an eye. But as a film from a larger studio it's so off-kilter you have to wonder why they thought it would be a success. It wasn't because not that many people want to be made to laugh and barf in equal measure. I'm one of those people, and, for me, Slither is an absolute winner.