It takes a lot to make Aquaman cool. On paper, a guy that can swim around under water and talk to fish is inherently dumb, an issue only exacerbated by so many shows (like Superfriends) that relegated the poor Fish Bro to also-ran status. "What's that, we're on dry land? Well have fun without me, guys!" Aquaman, among many people, is a total joke. Trying to make a movie about him that people care about seems like a lose-lose proposition. 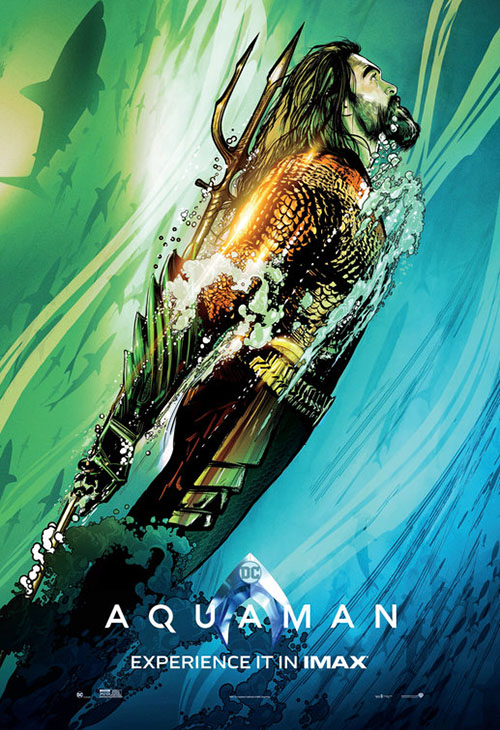 When you couple that with how much people seem to hate the slate of DC Extended UniverseStarted as DC Comics' answer to the MCU, the early films in the franchise stumbled out of the gates, often mired in grim-dark storytelling and the rushed need to get this franchise started. Eventually, though, the films began to even out, becoming better as they went along. Still, this franchise has a long way to go before it's true completion for Marvel's universe. films (with Wonder Woman generally considered the one bright exception to the whole series), any filmic version of Aquaman was starting out (if you'll excuse the pun) under water. How the hell would DC be able to make a watchable movie about the least interesting water-based superhero this side of the Wonder Twins?

Well, they managed it. I mean, only just, since there are some flaws with the 2018 Aquaman. Even flawed, though, this film is still one of the best DCEU films to come out. Sure, that's a backhanded compliment if ever there was one, but in this case it's also a well deserved one. Aquaman is bright, funny, and enjoyable, all things than many of the films in the DCEU have struggled with. This is the kind of film DC needs to make if they want to win people back over to the DCEU.

We start with a brief flashback showing how Aquaman's dad, Thomas Curry (Temuera Morrison), met Aquaman's mom, Atlantean Queen Atlanna (Nicole Kidman). This leads to a few years of bliss for the two as well as the birth of their son, Arthur. Eventually, though, forces from Atlantis come to reclaim their Queen, splitting up the family. We then get a few scenes of Arthur growing up into his powers to become "The Aquaman" before the movie really starts. Then, picking up sometime after the events of Justice League (as alluded to by a single line about how Aquaman fought Steppenwolf in that movie), we find Aquaman (Jason Momoa) patrolling the seas, coming to the aid of a Russian naval boat and fighting off some high tech pirates lead by the Mantas, a father-son team. The elder is wounded and left for dead in the fight while the younger pirate, Black Manta (David Kane), swears revenge against Aquaman.

While Arthur is having his own exploits up above, there is turmoil below the seas at Atlantis. Arthur's half-brother, Orm Marius (Patrick Wilson), has designs on ruling the world, and not just the world below the seas. To accomplish this, though, he has to wipe out the top-siders, making the Earth more habitable for the mer people. This leads him to form-up his allies, fake evidence that the top-siders want a war with Atlantis, and lunch a full-scale assault. The only person standing in their way is Aquaman, but to stand a chance he'll need help. That aid comes from Mera, princess of one of the five tribes of Atlantis and betrothed of Orm. She guides Arthur on his journey to heroism, guiding him to find a magical trident that could empower him and grant him the ability to unseat Orm. Now they just have to find that trident and find a way to make Arthur accept the hero within himself. 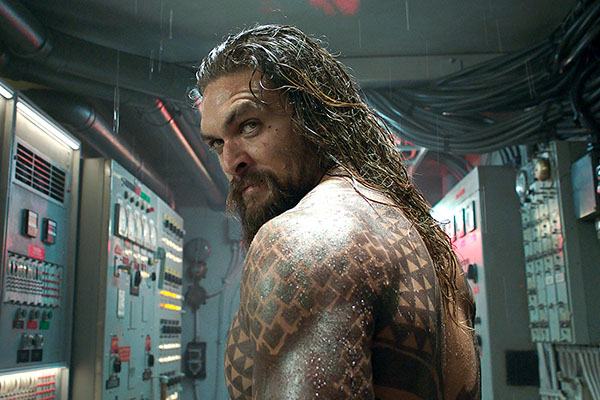 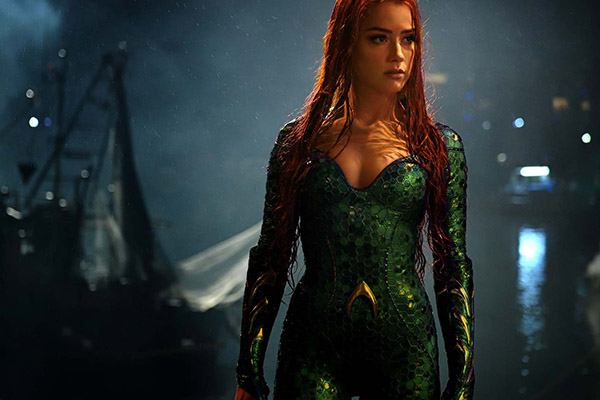 To put it bluntly, there's a lot going on in Aquaman and not all of it sticks as well as it should. The biggest flaw, really, is Black Manta. In this comics this character is Aquaman's greatest nemesis, a force equal to Aquaman in all respects. In the movie, though, he's just some jerk pirate with a grudge to settle. He's a tool being used by Orm to get at Aquaman, but he never feels like a fully-realized character, let along Aquaman's greatest villain. Sure, he's probably being setup to become a greater force in a future movie, but he's just not given his due here to really feel effective in any way.

And yet, Black Manta is still a more interesting character than Orm. Because we're just dropped into the conflict between Atlantis and the top-siders much like Aquaman is, we never really get a good feel for who Orm is or why he's doing all the things he does. He comes across as a petty tyrant with delusions of grandeur, and while he may have power he never really feels like a threat to his brother, Arthur. Some of this is the fault of Wilson who gives a wooden performance as the lead villain. Maybe he wasn't comfortable working against a green screen (of which so much of the movie was shot against), or maybe he just couldn't invest in the part. Whatever the case, Wilson doesn't give a very good performance as Orm, leaving the movie without an effective villain to focus on.

Wilson's flat performance is contrasted by Momoa's all-in portrayal of Aquaman. Momoa is a big, doofy dude in life and that same personality carries over to Aquaman. While his original appearances (a cameo in Batman v Superman, co-star in Justice League) set the character out as gruff and dour, Aquaman let's Momoa make the character into someone much closer to the actor's own personality. Arthur this time around is a laid-back, surfer-bro kind of dude with a huge personality and a lot of warmth. Momoa certainly seems more comfortable making Aquaman into a big, lovable teddy-bear (instead of his darker personality in the previous films). His performance is larger and fun, and it helps carry the film, giving us a central character we can care about.

And, to be fair, there are other actors that give solid performances along with Momoa. Amber Heard is the effective co-lead of the film, and she has enough sass and charisma to work well along side Momoa. It's his movie, to be sure, but Mera at least feels like an equal (even if everything she does in this film is in service to him -- in a probably sequel, they need to give her more to do). We also have supporting roles from Willem Dafoe, who is always great in every role he's in, and Dolph Lundgren, giving a surprisingly nuanced performance as another king of the Atlantean tribes. Plus, of course, Nicole Kidman is solid in the few brief scenes she gets as Atlanna; I just wish that (as with Mera) she was given more to do in this otherwise very bro-heavy movie. 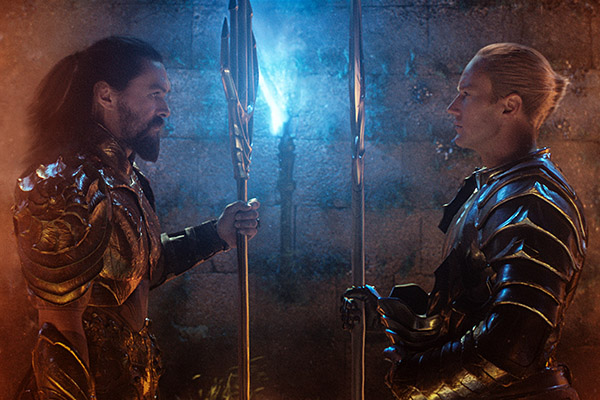 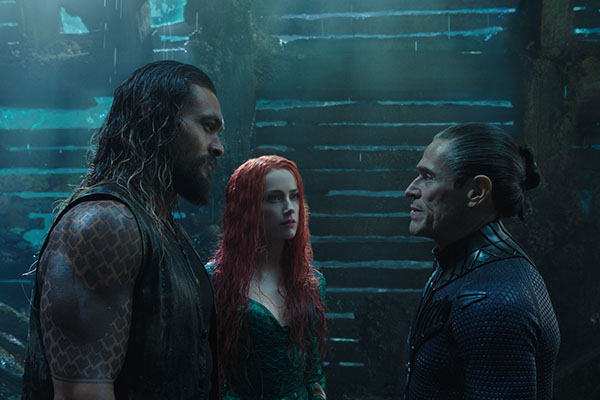 Naturally, much of Aquaman is a CGI-laiden affair. While many would gripe that this is par for the course in DCEU films, in this particular film its just a necessity. Filming a bunch of people, sets, and everything else under water would be expensive and near-impossible. Even the episodes of HBO's stupid series Entourage that faked filming a Aquaman film with James Cameron at the helm knew better than to have the master of water filming put his actors in a water tank the whole time. A movie like this has to be CGI with actors on wires just to make it all look right. A good 85% of the movie is all CGI and green screen, but after a few minutes of adjusting, you get used to the look of the film.

Those that have seen the previous DCEU films probably dread the amount of CGI in this film -- they've seen the drab, dour, fake look of Batman v Superman and Justice League and would rather avoid yet another one of those movies. But that's the thing: Aquaman is bright and colorful and, stylistically, all the things those other movies were not. The movie pops with sunshine filled locales top-side and ethereal, neon-colored realms below. It's a weird treat for the eyes, a movie that is, at times, visually stunning and a sight to behold.

Not that the visuals always work. The end battle of the movie, with Aquaman taking on the forces of Atlantis, is almost too much. There's so much going on in the scenes, so many CGI props moving around and bashing into each other, that it can be quite difficult to parse everything happening or even care about the carnage. This is the downside of CGI: without the real, tactile sense that puppetry and physical props can give a scene, everything feels artificial and fake. When you do a huge scene such as this all in CGI, it loses much of its luster and, very easily, can become a huge, confused mess. This final sequence doesn't ruin the movie -- there are still good character moments even in this CGI-explosion -- but a better put-together, less bombastic climax might have suited the flow of the movie better and given all the characters a better way to close out their movie.

Still, overall Aquaman is a solid little movie. It's fun and funny and delightfully stupid, all the things we should come to expect from a Jason Momoa film going forward. It also does what should, otherwise, be impossible: it give Aquaman, a practically un-filmable character, a solid movie to call his own.