There's been a trend recently in DC ComicsOne of the two biggest comic publishing companies in the world (and, depending on what big events are going on, the number one company), DC Comics is the home of Superman, Batman, Wonder Woman, and just about every big superhero introduced in the 1930s and 1940s. adaptations to look at the universe before a hero comes along. Gotham (a show I hated so much I refuse to watch it for this site) gave us the titular city before there was a BatmanOne of the longest running, consistently in-print superheroes ever (matched only by Superman and Wonder Woman), Batman has been a force in entertainment for nearly as long as there's been an entertainment industry. It only makes sense, then that he is also the most regularly adapted, and consistently successful, superhero to grace the Silver Screen. (although here at least young Bruce Wayne was a regular character). We also just had the debut of Pennyworth, another "Batman without Batman" show. And, tucking right into the middle of all resides Krypton, a show set on SupermanThe first big superhero from DC Comics, Superman has survived any number of pretenders to the throne, besting not only other comic titans but even Wolrd War II to remain one of only three comics to continue publishing since the 1940s.'s home planet 200 years before it blew up. Remembering that Supes was born right before the planet exploded (and was shipp3ed off immediately in a tiny vessel), that makes this show "Superman without Superman". 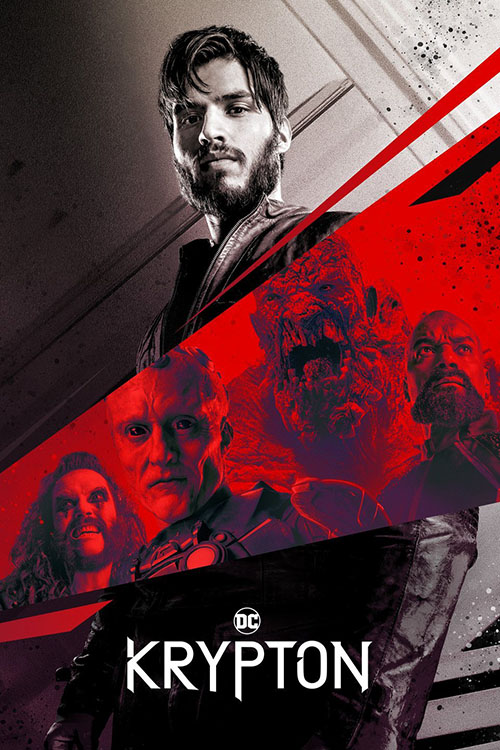 On it's face, the idea of a Superman show without good old Big Blue seems so stupid. What are we going to do, watch a bunch of normal people without superpowers deal with their daily bullshit? Yes, we are, and yet somehow it still feels like a superhero show. More importantly, the show is actually good, pulling off the weird feat of being a Superman show that doesn't make you miss the central hero. I seriously didn't think that was possible.

Krypton opens with the trail, and then execution, of Val-El (Ian McEihinney), leader of the House of El and prominent scientist on the planet. Oh, and he's also a traitor, so the ruling council states, backed by the religious leader the Voice of Rao (Rao essentially being their one true Sun God). Because Val-El won't deny the existence of alien life in the universe (and the ruling council clearly dictates that there is no other life than Kryptonians), Val-El is sent to his death and his house is stripped of their illustrious rank. His family is cast to the gutters, including his grandson, Seg-El.

Years later, Seg (Cameron Cuffe) has grown up to be quite the glorious street rat. Sharp witted and criminally minded, Seg pulls cons and cheats his way through life, all to support his parents after their fall from grace. It seems like this will remain his life until Adam Strange (Shaun Sipos) comes up to Seg and tells him that the future of the entire universe is at stake. Soon, Seg's parents reveal Val-El's secret lab and, there, Adam explains that Superman is missing from the future and if they don't cement events in the past, the universe's greatest champion will be wiped from existence. Only, there's a bigger problem headed towards the planet: Brainiac. This villain has his own plans for Krypton, and it will take a number of heroes and villains, past and future, working together to save the planet (and Superman as well).

The idea of a universe without Superman is a great hook to hang the series. Although the show never quite comes out and explains what, specifically, has caused Superman to disappear that mystery also adds to the dynamic of the show. Specifically you never know if the heroes are doing the right thing or the wrong thing to save Superman and the rest of the universe. It's a time travel show without a clearly stated series of steps to take, no clear cut "this person traveled back so we have to stop them". Instead everything is hazy and as often as the heroes do the right thing they could also be doing the wrong thing. 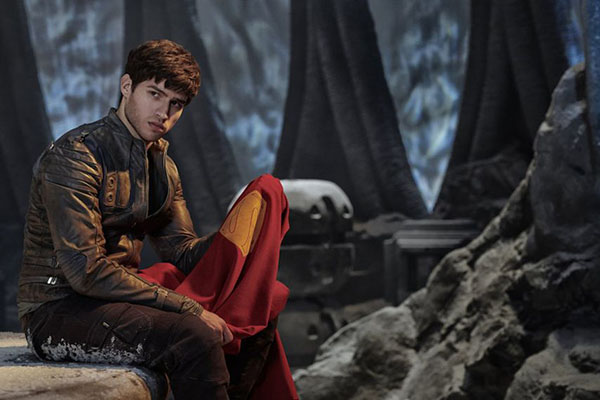 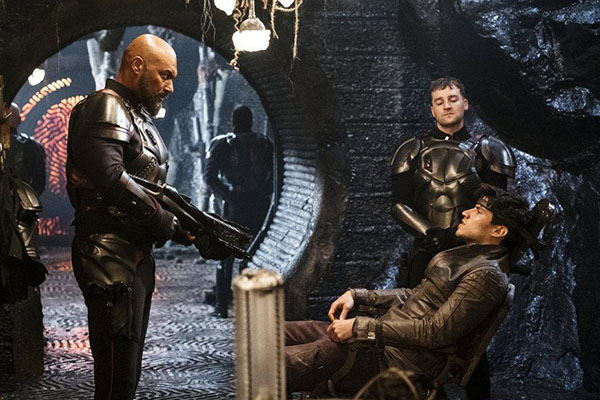 Plus, as is made evident halfway into the season, saving Superman means letting Krypton explode. Superman is shaped by Earth but if Krypton doesn't explode Kal-El is never sent to Earth to become Superman. Everything changes, top to bottom, in the future. Because everyone on the show, other than Adam Strange, is from Krypton they want to save their home world. We agree with them that they should try to save themselves and yet, at the same time, we also want Superman to come into existence. We can't have it both ways, so already we're pitched into this moral grey area about what's right and wrong for the future.

That's part of what makes Krypton so much more compelling than Gotham or Pennyworth as this show has complicated stakes. Think about it this way: in the current crop of Batman-without-Batman shows, Batman's very existence doesn't require Gotham to first be destroyed. Bats is trapped in a crumbling edifice and his whole existence is predicated on the idea that he can somehow change things. Various Batman characters may or may not crop up in these stories, but at the end of the day the inevitability of Batman is never in doubt.

Not so for Krypton. Here, the characters talk about building a better world, finding a brighter future for their world, but it's always told with an asterisk. If these people are able to build a better world it'll only last so long before Krypton explodes. That, or due to time travel, whatever causes the planet to explode (probably Brainiac, Collector of Worlds, who is the villain of the first season) may not actually happen and then we'll never get Superman. It's a lose-lose scenario with no happy ending no matter what the heroes of the show do. The show takes this deep perspective on the source material and really follows it through, exploring any number of consequences of the characters' decisions over the course of the first ten episodes of the run.

Another thing the show does well is that while it's mired in DC Comics lore -- the House of El, the House of Zod, the Voice of Rao -- it doesn't spend time mugging for the camera as it shows off just how cool it is to play with all these characters. Gotham, with its cast of characters plucked from Batman's comics, always seemed like it was one step away from just having a villain turn towards the camera and break the fourth wall. But then, of course, that show also suffered from the fact that the comics implied (and sometimes flat-out stated) that Batman was the primary reason why the city has so many colorful villains without Batman, maybe the Riddler and the Joker and Penguin and all the rest never come to be. It wanted to have its cake and eat it too. 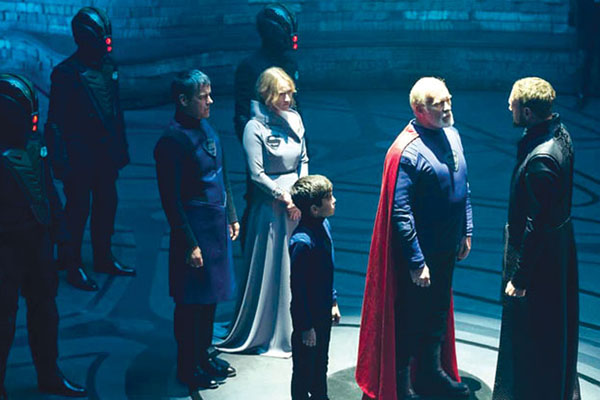 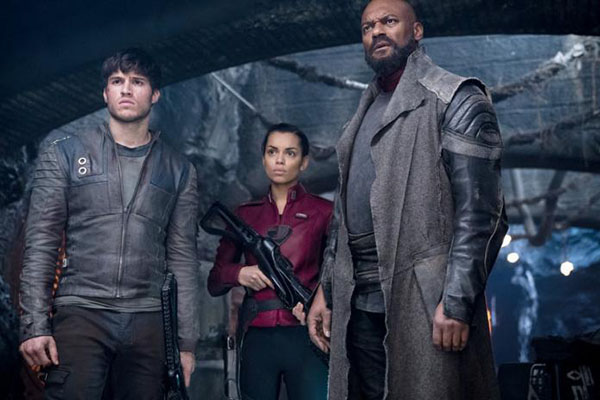 The closest Krypton gets is the mid season reveal of a time traveling General Zod (you know, the villain from so many Superman movies, including Man of Steel). The show, though, treats him like a real character. Sure, he might be a little power-mad but he never dips into the cartoonish evil of Riddler or Penguin over on Gotham. There's a certain inevitability to Zod, in fact, a hint that maybe his traveling back in time is part of the reason Superman disappears. He works as a necessary complicating factor that also adds another shade of grey to the proceedings.

In fact, if any part of the show doesn't work so well it's Brainiac. We're supposed to fear Brainiac and what he can do, but the actual villain remains a shadowy force for much of the first season, described but never defined. By the time he finally does show up we've already gotten so many other villains and chaotic people to deal with that Brainiac feels like a distraction right when he should be the focus. I think this is in part because Brainiac is played rather lifelessly by Blake Ritson -- I understand Brainiac is a robot but he didn't need to be so robotic, not if he was going to be the villain of the piece.

On the whole, though, Krypton really comes together. The fact is that a show about Superman that takes place before he's even born simply shouldn't work, and yet the series is able to to carve out a compelling narrative with real stakes. It does just about everything right in creating a version of Krypton we can invest in knowing full well the future of the planet and the inevitability of what's to come. It should be a total mess but, instead, is one of the best superhero shows I've seen in a while.

That said, if DC decides to make a Wonder Woman show without Wonder Woman -- presumably called Themyscira -- I'm still going to crap all over the idea. How many of these shows do we really need?