Aquaman is normally considered a joke. As perpetuated by Super Friends, Aquaman is the guy that can talk to fish. That's the super-power people always remember. Not his super strength, or the fact that he can breathe underwater, just that he's the bro that can talk to the fishes. Put his face up against an aquarium and he'll have deep, philosophical chats with the goldfish. No one takes Aquaman seriously. 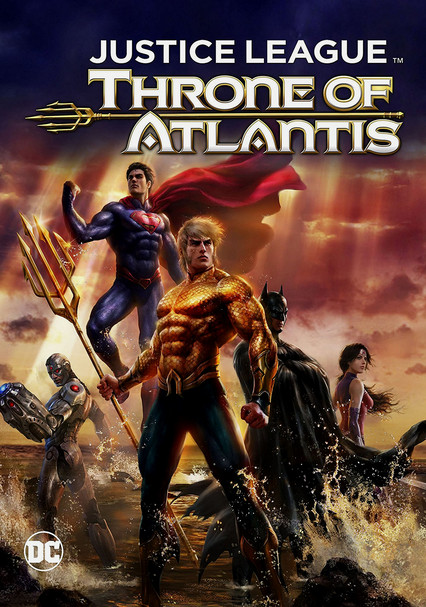 At least, not until recently. Over the years DC ComicsOne of the two biggest comic publishing companies in the world (and, depending on what big events are going on, the number one company), DC Comics is the home of Superman, Batman, Wonder Woman, and just about every big superhero introduced in the 1930s and 1940s. has tried hard to rehabilitate the character, making him darker, edgier, less the guy that talks to fish than the "SupermanThe first big superhero from DC Comics, Superman has survived any number of pretenders to the throne, besting not only other comic titans but even Wolrd War II to remain one of only three comics to continue publishing since the 1940s. of the seas". I can't say I really cared about him -- I wasn't buying his comics, that's for sure -- but I was at least aware of the new spin on the character DC was attempting to put forth. It wasn't until the DC Animated Movie UniverseWhile DC Comics was amping up production on this big "MCU-killer", the DC Extended Universe they were also quietly putting together another shared movie continuity, the DC Animated Movie Universe. This series was more closely related to the comics, directly adapting a number of famous storylines to, arguably, better effect than the live-action movies could. version of the character debuted in Throne of Atlantis that I actually cared about the character at all. As my wife put it once we were done watching the film, "they finally managed to make Aquaman cool."

Going back to watch it more recently, I was struck by that same vibe. Focusing on Arthur Curry / Aquaman before he became the king of Atlantis, Throne follows him on his journey to power. His half-brother, Orm, claims the throne and launches an elaborate plan to start a war with the "top-siders" and it's up to Arthur, with backup from the Justice League, to stop Orm and save the world. It's a simple story, sure, but the most important thing it does is treat Aquaman seriously. He's not just the guy that can talk to fish, but a real hero with real strength and power. He's also the guy best suited to take on the dangers of the deep ocean -- against the magic of Atlantis, even Superman is powerless. It does make the case for keeping Aquaman around.

That said, the film doesn't really make as strong a case for Aquaman being a full-fledged member of the League. Sure, the oceans cover a good portion of the surface of the world, but they're all ruled by a single king. and, from all we can tell, the Atlanteans only have one real city; they've never colonized outside their one, sunken continent, and from all we can see, they just don't have the numbers to really match the top-side civilizations of the world. Their technology (and magic) may be more advanced (as seen in the one battle the movie gives us), but they're just not that big or impressive of a civilization. Certainly the threats Atlantis faces aren't at the same level as the rest of the world. In that respect, then, Aquaman just isn't that impressive.

Put another way, what does Aquaman really add to the team. As we see in the movie, his people can raise and lower the tides and make tidal waves that could devastate cities (along the coasts at least). That just shows that the League should keep an eye on Arthur, though. Most villains seem to attack the land, not the sea, and any villains that rise up from the sea would really be an internal, Atlantean matter. Most of Aquaman's powers, even in this movie, are water-related, so just what benefit does he give to the League. He may be strong in the ocean (and film shows he's powerful in his home turf) but he's not an asset on land. 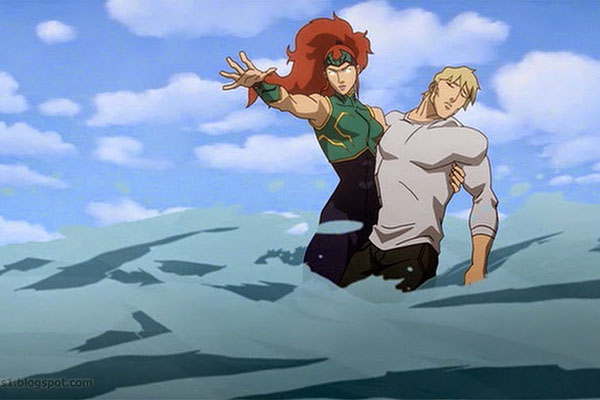 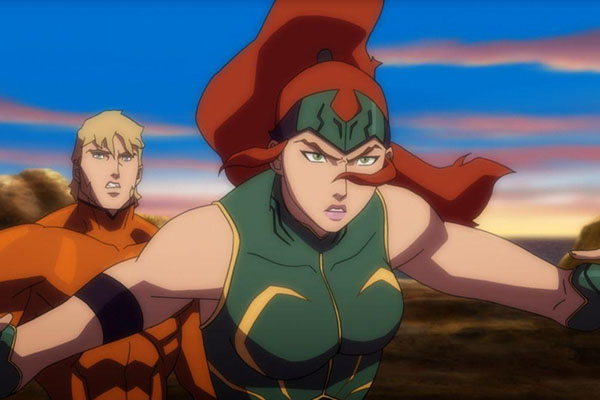 So then maybe the film doesn't do such a good job of making him cool. Or maybe it's just the character. As written in the movie Arthur is a closed-off, angry man who picks fights and has a chip on his shoulder. It's only when he's forced to go back to Atlantis that he realizes there's a world beyond his little mind. Bear in mind that there wasn't anything stopping him from going back to Atlantis; we see that even from an early age he could stay underwater for as long as he liked. He knew his mother came from Atlantis so he knew the city existed. The simple question the movie never really answers is why did it take so long for him to take an interest in that half of his heritage? He's angry that his mother went back to Atlantis to rule but it's not like he ever tried to go after her, to talk to her. He just sat on land and moped.

Once he goes to Atlantis he does become cool. He gains his suit, gets his powers, talks to fish, and becomes a strong hero. He very quickly grows to be the king Atlantis needs (even if the movie, short as it is, glosses over a lot of it to quickly tell the whole story). But it never really feels like Arthur needed to become king, that he really wanted to be in Atlantis until he had no choice in the mater. His hand was forced and he took the mantle simply because he had to. If Orm had been a better person instead of a raging dick, Arthur would have stayed on land, angry and alone, forever. That's not really a great place for the character to be.

I think my big problem with Throne of Atlantis is that it just hasn't aged very well considering another movie that came out afterwards: 2018's Aquaman. Both movies effectively tell the same story -- Arthur being forced to go to Atlantis to take on Orm for a right to claim the throne. The fact is, though, that the two movies have a very different vision of the character -- Throne of Atlantis has an Arthur that's basically unpowered, that doesn't want to be a hero or care about the rest of the world, whereas Aquaman features a version of the character that's already taken on the mantle of hero and just looks to grow the character more naturally into the title of "king". One has a guy that's ready for his destiny while the other, older movie simply forces his hand and doesn't give him a say in the matter.

Of course, the other big difference is that the DC Extended UniverseStarted as DC Comics' answer to the MCU, the early films in the franchise stumbled out of the gates, often mired in grim-dark storytelling and the rushed need to get this franchise started. Eventually, though, the films began to even out, becoming better as they went along. Still, this franchise has a long way to go before it's true completion for Marvel's universe. film actually takes the time to develop the character more fully. It's a longer film that better explores the character and doesn't have to rush through its character beats. It feels weird for me to say but a DCEU movie actually treats a character fairly well. But then, Jason Mamoa is a very charismatic actor who owns the role -- he may not have a comic accurate look (he's not a tall blond dude) but he certainly makes the role his own. Any other version is going to have a hard time comparing to the 2018 version of Arthur Curry. 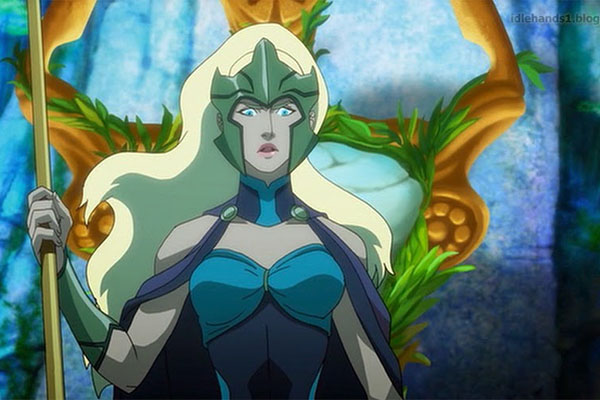 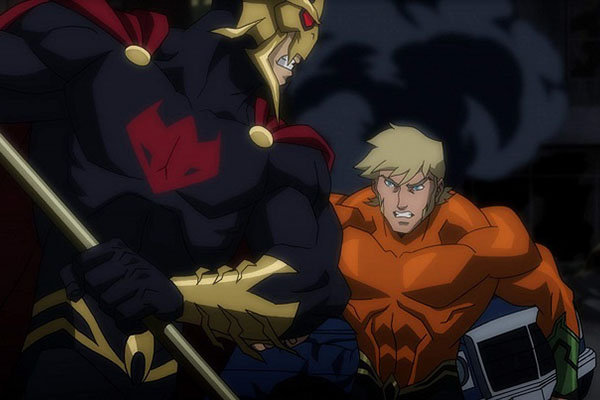 And that's a stumble Justice League: Throne of Atlantis can't just avoid. It almost feels unfair to judge the movie against a version that wouldn't come out for another four years, but when you have to very similar versions of the same story, comparisons have to be made, and the 2018 film does it better. Throne of Atlantis isn't bad, it's just not as good.

As an origin story for the character, and as a stepping stone for future adventures with this version of the Justice League, Throne of Atlantis is a fine movie. It's just already aged poorly through no fault of its own. If I'm going to watch a film about Aquaman, at this point I'm going to watch the Jason Mamoa version instead.