When watching the Wonder WomanLong considered the third pillar of the DC Comics "Trinity", Wonder Woman was one of the first female superheroes ever created. Running for as long as Batman or Superman (and without breaks despite a comic downturn in the 60s that killed superhero comics for about a decade), Wondie has the honor to be one of the longest serving, and most prolific, superheroes ever. films from the DC Extended UniverseStarted as DC Comics' answer to the MCU, the early films in the franchise stumbled out of the gates, often mired in grim-dark storytelling and the rushed need to get this franchise started. Eventually, though, the films began to even out, becoming better as they went along. Still, this franchise has a long way to go before it's true completion for Marvel's universe. -- 2017's Wonder Woman and follow up Wonder Woman 1984 -- general consensus is that the films are good but not great. They're uneven, sometimes losing sight of what even makes for a good superhero film. The thing I want to posit, though, is that for all their flaws they're good Wonder Woman films. By that I mean that they do showcase the heroine at her best and treat her like a real character, not a joke of just a sex-pot but a person. 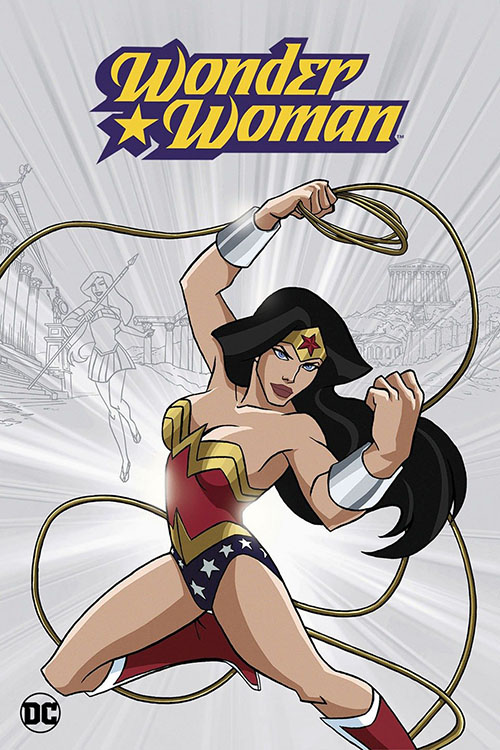 I had this realization while watching DC ComicsOne of the two biggest comic publishing companies in the world (and, depending on what big events are going on, the number one company), DC Comics is the home of Superman, Batman, Wonder Woman, and just about every big superhero introduced in the 1930s and 1940s.'s previous attempt with the character, 2009's animated Wonder Woman. Although loosely based on the comics by George Perez, who studied Greek mythology (to give the Amazons a richer back-story) and worked to try and give Wonder Woman a more feminist tilt, this movie doesn't really seem to understand the character all that well. Although it gets the basic strokes right -- island of Amazons, Diana (voiced by Keri Russell) is the daughter of the queen, goes off to the "land of men" to fight Ares -- it fails to understand Diana as a person. She's a collection of ticks, ogled by men, but the soul of Diana is missing and the film never really finds her. It's a handsome looking movie (befitting the general art-style of DC's films in this era), but when it comes to being a "Wonder Woman film", it sucks.

Set in the modern (at least for time) era, Diana lives with the Amazons on the island of Themyscira, an island protected by the magic of Hera to keep it apart from the "world of Men". Centuries earlier the Amazons had been the last line of defense for the world against the armies of Ares. They saved the world, at a bitter cost to their own numbers, and after the way they became the jailers of Ares and guardians of the old ways. The queen, Hippolyta, was given a daughter, Diana (who was made of clay in this version of the story), and the Amazons set about living their peaceful lives on their island for the rest of time... assuming Ares never escaped.

So, of course, Ares escapes. When American fighter pilot Steve Trevor ends up crashing on the island, quite unexpectedly, Hippolyta decrees that the finest warrior will help Steve find his way back home. This leads to a series of games where all the Amazons compete to be that warrior. While all those warriors were distracted, Ares, aided by his Amazon lover, escapes his cell and makes for the "world of men". When Diana wins the games, and Ares's escape is revealed, Diana is set with two tasks: take Steve home and stop Ares at all costs. It's one woman against an immortal god for the soul of the world.

As I noted, there are parts that this film gets right. It does treat the Amazons as a whole, well, never looking down on that as a society. Any one of these women could be a Wonder Woman, a point the film makes well in the various sparring matches Diana has with her "sisters". This is also shown in the games themselves as Diana and another warrior compete to a near deadlock in the competition. Heck, the Amazons even show up in the climax to aid their sister in the war against Ares, and they all acquit themselves well. That's something I have a feeling the DCEU film copied as in many instances it does feel like the producers purposefully studied this film to see what it did well (and what it did poorly). 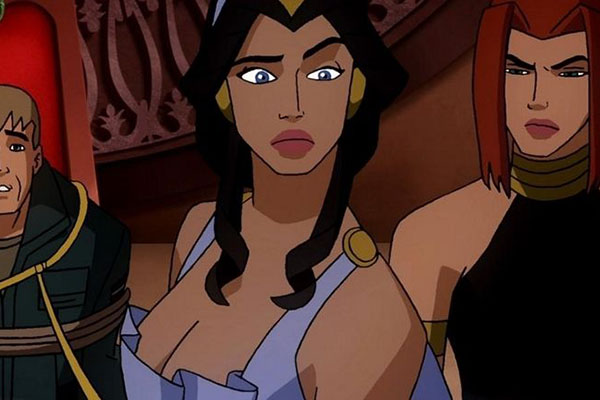 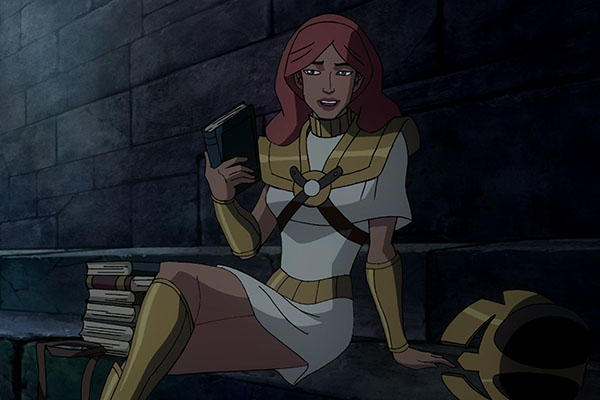 At the same time, the film never stops ogling Diana. It starts early on with Steve constantly making comments about how pretty she is, wolf-whistling at her more than once. It doesn't help, of course, that this was during the era when Wonder Woman dressed in her one-piece swim-suit bustier, which was clearly designed for sex appeal -- later versions of the costume have at least given her a little more to wear, tamping down some of the overt sexism of the suit itself. The film does try to call out how overtly sexy the costume is, but it does it after moments where Diana's breasts jiggle as she puts it on, or after Steve makes yet another comment about Diana's looks, so it doesn't seem like the film really believes it's own point.

I mean, seriously, the number of times Steve (voiced by Nathan Fillion) makes cracks like, "your daughter has a nice rack," were so numerous I got tired of the shtick. Then he tries to get her drunk to seduce her (which she realizes and puts a stop to, but it's still icky). And then he is the aggressor and kisses her at the end of the movie, a move that she really should have initiated if she wanted it. In all cases it really does feel like this film doesn't understand how to write a female character without first ogling her (and then ogling her again after and throughout).

This becomes an even bigger problem because, outside of the back and forth of Steve trying to seduce Diana and her getting pissed at him for being a creepy letch, there really isn't much to the characters r the story of the film. Diana and Steve go to the "world of man", stumble onto Ares's plans, fail to stop him, and then have to fight his armies when they show up at Washington D.C. That's about it. Sure, the 2017 film didn't have a super deep story either, but it had characters and a fun, charismatic dynamic between them, to hang its story (and the lack of that dynamic in that film's climax is the reason that film stumbles). Steve and Diana don't have the right chemistry to carry the film and it shows as the film hobbles towards its own climax.

If Ares were a better character this might have been mitigated some. Problem here is that the film essentially shunts him off screen for huge portions of the run-time. This version is Ares is better than the version we had in the 2017 film (as in he's not only the primary antagonist of the film be we clearly see him at various points throughout so we know he's the bad guy) but this movie still doesn't do enough to flesh him out and make him interesting. As I've stated repeatedly when reviewing superhero movies, a film needs a charismatic and dynamic villain; if you don't have that then you don't care if they succeed or fail. This film doesn't do enough to build up Ares and the climax stumbles because of that as much as because you also don't care about the heroes. 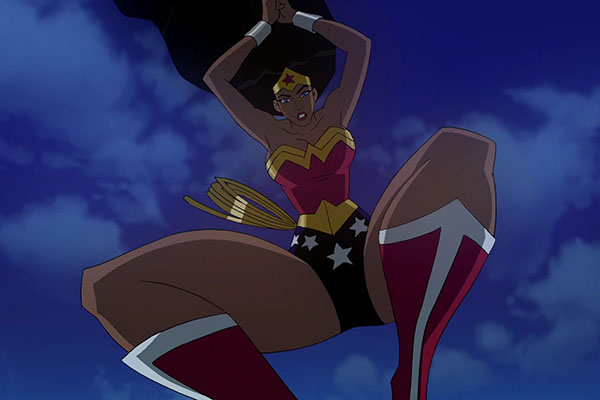 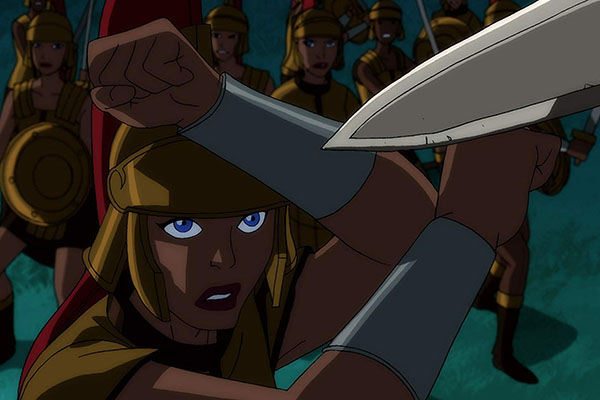 This film feels, more than anything, like a pilot for where Wonder Woman could go given the right material. We eventually do get much better versions of Wonder Woman -- in her comics post-"Flashpoint", in the DCEU, and in the DC Extended UniverseStarted as DC Comics' answer to the MCU, the early films in the franchise stumbled out of the gates, often mired in grim-dark storytelling and the rushed need to get this franchise started. Eventually, though, the films began to even out, becoming better as they went along. Still, this franchise has a long way to go before it's true completion for Marvel's universe.. This film, though, just doesn't know what to do with Diana. She's a blank, sexy void when the film needs a dynamic lead (while it gets its head out of the gutter). This was one of DC's first attempts at giving her a solo film and it's awful. The best part about it is that it shows what not to do while directly adapting the source material. Thankfully things got better from here.