For the Glory of Mother Russia!

There is a history in DC ComicsOne of the two biggest comic publishing companies in the world (and, depending on what big events are going on, the number one company), DC Comics is the home of Superman, Batman, Wonder Woman, and just about every big superhero introduced in the 1930s and 1940s. of taking alternate looks at the lives of the most popular characters. Marvel would call these tales "What If?", which is a very accurate name for them, but DC has always gone with "Elseworlds" as the nomenclature for these works (which is cool sounding but maybe not as bluntly easy to understand). Several of DC's most famous works -- Batman: Gotham by Gaslight, Justice League: The Nail, Kingdom Come, and, yes, Superman: Red Son -- all fall under this heading (with many of them being part of the "Elseworlds" imprint DC ran for a while). 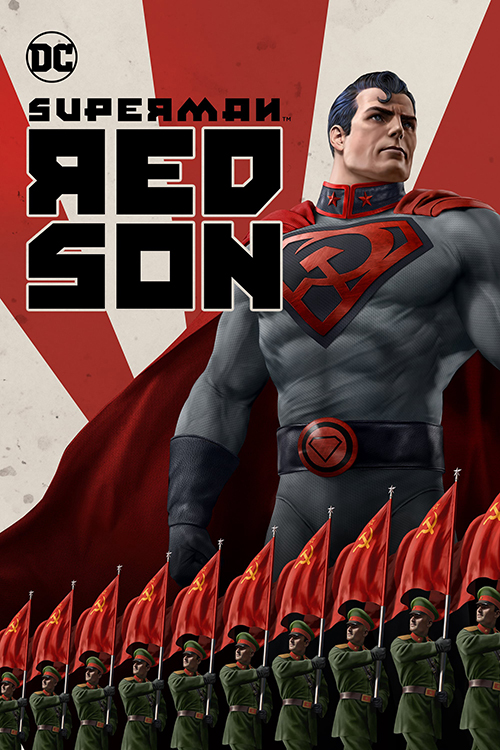 With the (relative) success of DC's animated direct-to-video films, the production company has take to adapting many of its famous storylines. The comic publisher had previously adapted another Elseworlds tale, Gotham by Gaslight, and now we have the big SupermanThe first big superhero from DC Comics, Superman has survived any number of pretenders to the throne, besting not only other comic titans but even Wolrd War II to remain one of only three comics to continue publishing since the 1940s. story to go with (although it would be just as fair to effectively call this a Justice LeagueThe premiere team at DC Comics, their version of the Avengers (which actually came before the Avengers and, really, has existed in some fomr since the early 1940s), the Justice League is the team-up to end all team-ups, featuring some of the most popular, and longest running, characters in all of comics history (and also Booster Gold). in all but name with how many other alternate versions of heroes show up here). In many ways the film is pretty faithful to the original story, something a lot of fans probably will like (especially after the horrible changes made to Batman: The Killing Joke). But, deep down, there's a message in the film that resonates even more now than it might have back when the story was original published, and in keeping the film faithful to the original story the film actual deflates a solid, pointed message about the current state of the world. In ends up undoing solid work, in a way, so that a faithful movie is less resonant than one that might have been willing to tweak the ending of the story for better effect.

As a faithful adaptation of the original source material, the beats of this film will be familiar to anyone that's read the original comics. Instead of landing in Kansas, for whatever reason Kal-L's craft crashes into a collective farm in the Ukraine, circa the 1950s. The Last Son of Krypton is raised not by a loving mother and father to respect "Truth, Justice, and the American Way" but by workers who believe, deeply, in the power of Communism and the power of the worker. Giving himself to the state, the alien grows up to be Superman, weapon of the people and the great defense of Mother Russia. This changes the whole dynamic of the Cold War, re-contextualizing the classic tete-a-tete between Lex Luthor and Superman. Now, Luthor is the hero of America, working tirelessly to stop the Soviet Superman at all costs. Aided by his wife, Lois Lane-Luthor, and CIA agent/body guard Jimmy Olsen, Luthor has to try and find any way he can to undercut the power of Superman so that America, and the rest of the free world, doesn't fall under the power of the Soviet Empire.

Things take a turn, though, when Brainiac shows up, capturing Stalingrad and shrinking it down into one of his classic capsules. Superman battles the evil alien and seemingly defeats it, repurposing the technology to aid Mother Russia. But Brainiac may have more in store for Superman, and the people's greatest weapon may end up being the alien menace's new way to enslave the world and capture all of Earth for his collection. It will take the combined efforts of Superman and Lex Luthor to save the world from this new, and bigger, threat.

When it came out, Superman: Red Son rang as a dark what if story. At the time seeing Superman become the hero of the people's collective, a tool of the "evil" communists, felt like a subversive twist. If even this symbol of American exceptionalism could be corrupted, what did that say for the fate of the world. The ending of the book, with Superman sacrificing himself to defeat Brainiac, leading Lex to unite the world under a banner of a free America, felt like a salvation. Superman might have gone bad, but the ideals of freedom and justice redeemed even this fallen hero, saving the world yet again. 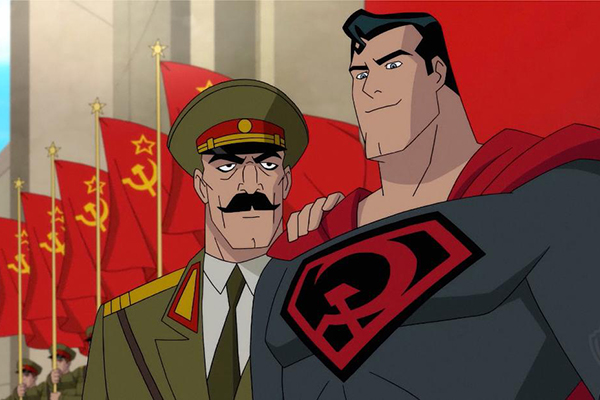 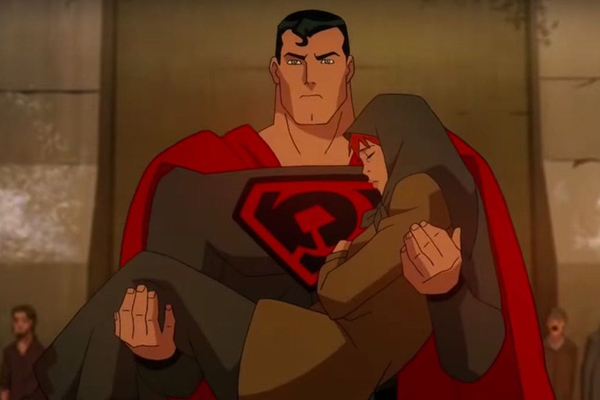 That's a pretty easy reading of the book, granted in no small part by the fact that original author Mark Millar really loved taking American icons and rubbing them around in the dirt. His run on The Ultimates gave us a Captain AmericaCreated by Simon and Kirby in 1941, Captain America was a super soldier created to fight Germany and the evil HYDRA. Then he was lost in the ice, only to be found and reborn decades later as the great symbol of the USA. who was basically a fascist, remember, so it's easy to see him doing the same thing with Superman in Red Son. That's an obvious interpretation.

The fact is, though, that the last 17 years have changed a lot about how we view the world, with Capitalism and the American way of doing things seeming a little less like the obvious good it once was. Now, when we have a hero talking about evening the playing field and giving rights and power back to the workers, you can't help but look at it and think, "you know, maybe Superman is right. Maybe the one-percent don't need to control all the world's assets, it's political power, and the people." When Superman talks about saving the world from the evil of Capitalism, about how American is going to break apart under the strain of its failing system, maybe he's right.

I don't know if the producers of this film meant to have that message, but they certainly didn't downplay it. The art in the comics presented Superman in a dangerous light -- stark angles, ominous lighting, uniforms that looked more like Nazi regalia than anything Superman (and Wonder WomanLong considered the third pillar of the DC Comics "Trinity", Wonder Woman was one of the first female superheroes ever created. Running for as long as Batman or Superman (and without breaks despite a comic downturn in the 60s that killed superhero comics for about a decade), Wondie has the honor to be one of the longest serving, and most prolific, superheroes ever., for that matter) should wear -- so it was easy to view him (and her) as the villain of the piece. Here, though, while the costumes might be the same, Superman isn't drawn as the villain; he's presented as a sympathetic, if sometimes misguided, hero, one who looks heroic even if he's on the "wrong" side.

If anyone seems like fascists in this work, it's the "heroes" from the original comic. BatmanOne of the longest running, consistently in-print superheroes ever (matched only by Superman and Wonder Woman), Batman has been a force in entertainment for nearly as long as there's been an entertainment industry. It only makes sense, then that he is also the most regularly adapted, and consistently successful, superhero to grace the Silver Screen. was a freedom fighter trying to stop the evil alien, but here his methods (sacrificing anyone that gets in his way) coupled with the fact that we don't view Superman as a straight-up villain, make the Bat seem like an antagonist, not a tragic hero. When Wonder Woman joins Superman and his vision, we originally viewed it as another corruption, another time the comics turned a hero who was aligned with American and her ideals, into a twisted form on the team of the villains. Here, though, not only does Superman seem like a good guy worthy of Wondie's help, but we also have the recent cinematic history of Wonder Woman coloring her, shading in her character and making us think, "if she sees good in this plan, maybe we should too." 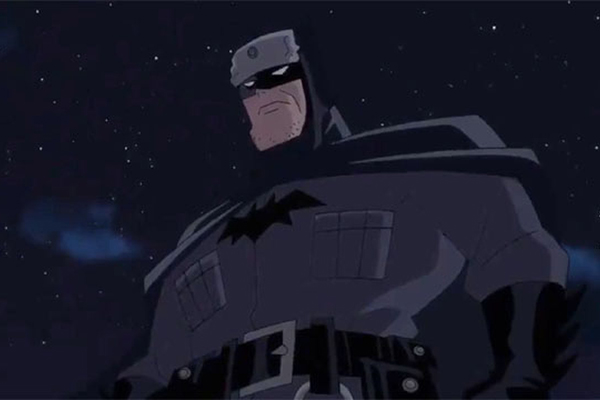 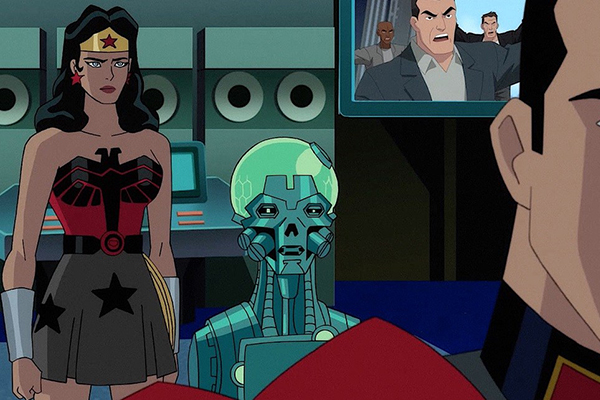 Essentially, this film strikes a different tone from the original comics and actually makes the viewer think. There's a deeper political message the film is able convey even as it takes the basic story from the comics and faithfully adapts it. It's amazing what a little time can do since it allows us to reevaluate what we might expect from this kind of story. And yes, maybe it's an interpretation that I saw that even the producers weren't expecting, but it's hard not to see the subtle changes to the story from the animators and writers (people who, traditionally, aren't treated that well in the comics industry) as an acknowledgment that maybe there's more to this story than a simple, "America, FUCK YEAH!" attitude can bear.

That said, the ending of the film undercuts whatever interesting political angles might have been developed. The ending is faithful to the original story (only omitting a distant future end piece that, even back when the comic came out, didn't work and I'm glad it's gone). Superman saves the world, seemingly sacrificing his life so Luthor can build a new, grand American ideal. Sure, Lex says he'll take what Superman started and use it as a basis for something even better. But with all the U.S. flags flying, and the new world being called the "Global United States", the ending undercuts its own film. Superman had a lot of great ideas but it's Lex, and American exceptionalism, that wins the day. Screw whatever message might have been there, the need for a little reflection on where the world is now. "America, FUCK YEAH!" It just doesn't work for me.

Superman: Red Son is 95% of a great movie, one that takes an original work and improves it by filtering it through a slightly different lens. The ending, though taken right from the comics, just doesn't work in this new angle. It's a simple end to a complex story, a super-heroic ideal applied to a story that tried to be anything but. I liked the movie right up until the end, but those last few minutes rang hollow for me. I think there's still merit in Superman: Red Son, but what could have been a real classic ends with a ho-hum whimper. Sometimes being true to the source material hurts the final product.