Something Wicked This Way Comes

When it comes to adaptations of DC ComicsOne of the two biggest comic publishing companies in the world (and, depending on what big events are going on, the number one company), DC Comics is the home of Superman, Batman, Wonder Woman, and just about every big superhero introduced in the 1930s and 1940s. properties, one of the most beloved characters is John Constantine. This isn't just because he's an interesting character -- a morally grey anti-hero with dark, magical powers who's just looking to ensure his soul doesn't end up in hell -- but also because he's played with aplomb by Matt Ryan. Ryan took on the role of Constantine for the short-lived 2014 NBC series Constantine, and because the producers loved his performance there (which, seriously, he nailed so hard) they brought him back for a crossover with Arrow after his series was canceled. He then went on the reprise the role in the ArrowverseWhen it was announced that the CW was creating a show based on the Green Arrow, people laughed. The CW? Really? Was it going to be teen-oriented like everything else on the network and be called "Arrow High"? And yet that one show, Arrow has spawned three spin-offs, various related shows and given DC a successful shared universe, the Arrowverse on TV and streaming. as part of the Legends of Tomorrow plus voicing the character in two DC Animated Movie UniverseWhile DC Comics was amping up production on this big "MCU-killer", the DC Extended Universe they were also quietly putting together another shared movie continuity, the DC Animated Movie Universe. This series was more closely related to the comics, directly adapting a number of famous storylines to, arguably, better effect than the live-action movies could. related works, Justice League Dark and Constantine: City of Demons. 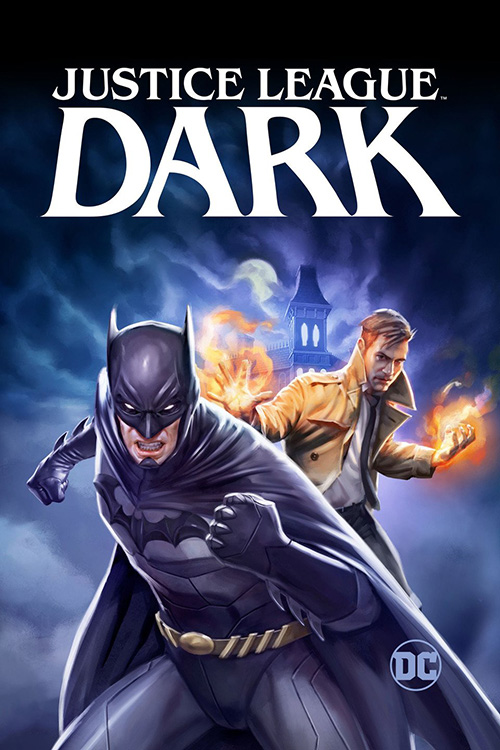 Justice League Dark actually predates much of Ryan's current work as John Constantine, tucking in before the character became a recurring character on Legends, and it's interesting because the character is clearly Ryan doing his normal shtick as the character even though he now exists in a different continuity from the Arrowverse (although if you want to get technical, the 2014 NBC series probably exists in its own continuity separate from the Arrowverse as well, meaning he's now played three different versions of the role). This is just one of those rare instances where one actor owns a role so well that any time the character is needed there's only one person that can be called (no matter what kind of continuity gymnastics have to be pulled in the process). That said, while it's lovely to have Ryan in the role (for however many times he wants to go on playing Constantine), it would have been nice if Justice League Dark were a better showcase of the character, or a really good movie in general.

In the film the Justice League is called to action when people start going crazy, ranting and raving about demons while killing everyone they encounter. Batman involves himself in the case, contacting the League's magical consultant, Zatana. She, in turn, goes to the only source she knows for demonic magic this dark and vile: Constantine. Oh, and Deadman, a one-time trapeze artists and now full-time ghost tags along. Constantine then leads the newly formed team on a journey around the globe in search of whatever dark sorcerer is behind these demonic attacks. They'll have to work quick, though, because the demons are getting stronger and not even the League itself may be able to resist their evil magics.

Justice League Dark is a slight movie, to say the least. It's one of those movies where the concepts are so strange and out there that instead of explaining anything the characters just make up some mumbo-jumbo words and then do crazy things as if it all makes sense. A "Dark" Justice League isn't an inherently bad concept -- evil magics and dark sorcerers have been a part of the DC universe since the early pulp days of comics. Having a team specifically dedicated to studying, and fighting, these dark events just makes sense. But the ideal way to start up a team like this is through a long-running series, one where the new and weird concepts can be explained over time so the viewer can understand them.

Without clear build up, explanation of concepts so the audience can understand them, the movie amounts to just so much running around. It's like on Star TrekOriginally conceived as "Wagon Train in Space", Star Trek was released during the height of the Hollywood Western film and TV boom. While the concept CBS originally asked for had a western vibe, it was the smart, intellectual stories set in a future utopia of science and exploration that proved vital to the series' long impact on popular culture. when the ship gets into danger and someone suggestion "reversing the ionization flow to the shields to unleash a phased plasmic burst" to save the ship. Those are all certainly words, and the action of course saves the day (because it wouldn't be a show if the ship, and her crew, blew up, never to be seen again) but that doesn't make the nonsense of what they said or did coherent in any way, shape, or form. Justice League Dark has that same problem. 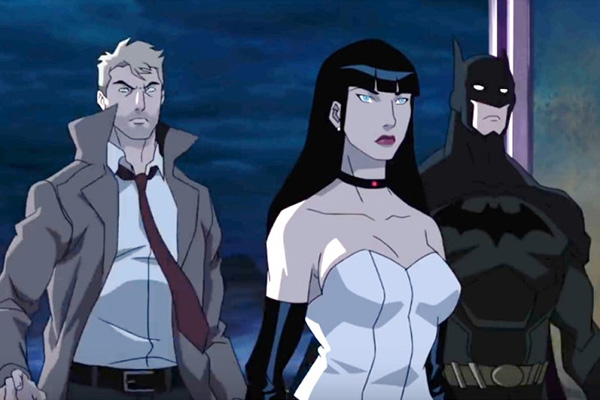 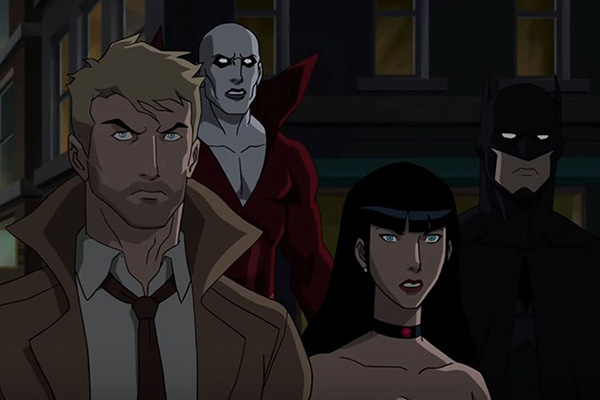 As an example, John and Zatana need to figure out where the demons are coming from. So they enter the mind of one of the comatose people that had previously went on a killing spree. To do this they use a magical token that acts as a key to enter the mind's own realm. So they physically enter the mind, then explore the guy's memories (which are represented as bubbles) while floating and talking the whole time. Then a giant shit demon appears in the real world and attacks Batman and Deadman so it can get to the comatose guy and invade him mind to kill John and Zatana. They fly out at the last second and Zatana casts a spell that causes the demon to explode. Oh, and in the process Constantine grabs the shard of a memory from the guy (as the guy's mind shatters like glass) and brings it out into the real world so they can follow it to the next clue.

Does any of that make sense? Not really. Sure, it's a linear progression of events (with a big action beat, just like superhero movies need), but it's an elaborate sequence without much in the way of justification. If there's so much dark magic flowing out, why bother entering the mind of a guy to see a shard of a memory? Couldn't they have hit their books, or cast a locater spell, or any one of a half dozen other less stupid ways to get the information they needed? It's like the producers said, "hey, we have Constantine in this so lets make him jump through some magical hoops to get the job done and showcase his powers." Sure, he could do this, but as a practitioner of really bad magics, Constantine should know there are less dangerous ways to get the job done.

It certainly doesn't help matters that the film tries to play its story like a mystery -- who is the evil sorcerer causing the demonic attacks -- but the actual plot is so threadbare that the mystery never connects. It's pretty obvious that once a character is introduced early in the second act that he's the bad guy (even though he's presented as a friend), that he'll betray the heroes for his own needs, and that everything is his plan requires a whole series of coincidences to occur, and if they didn't, and if the heroes didn't get involved, his plan would never have worked. It's pretty bad when the whole plot of a movie boils down to, "if the heroes had just stayed home, everything would have worked out."

The best thing going for the film are the characters. Constantine, of course, is great since Ryan is always good in the role. New characters for the fold, like Zatana and Deadman are handled pretty well as well. Deadman, aka Boston Brand, is a brash and amusing character with an interesting power-set: for a limited time he can inhabit the bodies of mortals, using them as his own conduit. Mostly, though, he's there to serve as comic relief and lighten the mode of the piece some, which he does without becoming too annoying. Zatana, meanwhile, acts as a foil to Constantine, a sorceress of equal abilities (although her powers veer lighter in tone) who doesn't agree with his methods. The two bickering over the right way to do things is much more enjoyable than anything the story has to say. 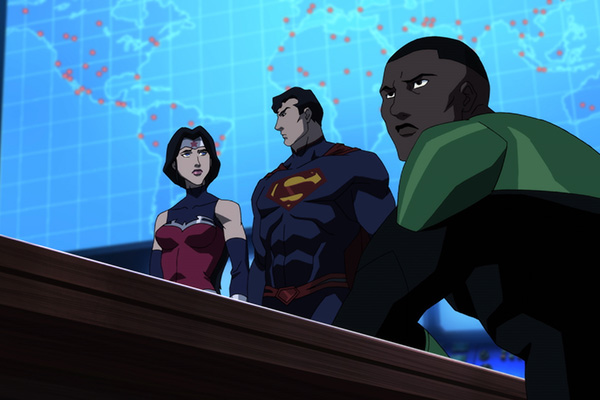 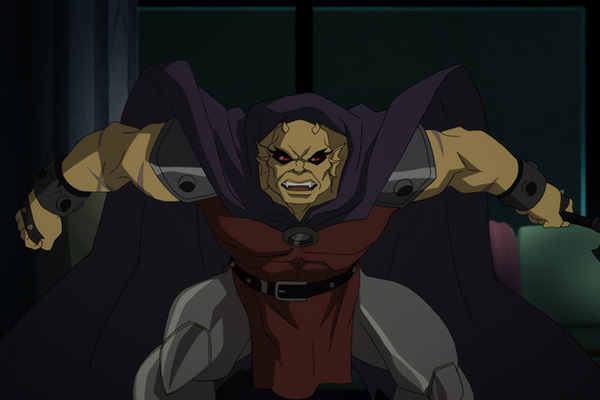 Along with this main trio, the film also has has a couple of other tag-alongs for the ride. Batman is a prominent player in the film, although he doesn't actually contribute much beyond punching people, throwing batarangs, and grunting noncommittally at the events around him. He honestly could have been ditched from the film and it wouldn't have been a big deal. Worse is poor Swamp Thing who gets introduced here, setup as if he's going to be the team's secret weapon, and then is summarily dismissed halfway into the big battle never to be seen again. I understand that the character is part of the the dark Justice League over in the comics but he deserved better here.

Wat this film really needed was more time to establish its characters and setting before diving into the story. If we could have had a few scenes with Zatana and Constantine before this flick, that would have helped to establish them, and their powers, so the film didn't have to spin its wheels here. Plus, by showing them using their powers as consultants for the League in past flicks their scenes here might not have felt like so much Trek techno-babble. Hell, we just had another movie is demonic possessions, Justice League vs. Teen Titans, and either or both of these heroes could have shown up over there to consult. That would have been a great way to tee up this movie.

Instead we have the adventures of some magicians we don't know while Batman awkwardly hangs out on the periphery. There are neat ideas in Justice League Dark but there's' just not enough time to flesh them out. So time and again the film brings up something neat, quickly burns through it, and then never brings it up again. It's just so much running around without any real payoff.