The Clown Queen of Gotham

When last we checked in with our favorite female clown/murderous psychopath, her star was on the rise. She had a new animated series, a comic book series, and a new film coming out. Since then, though, things have taken quite a turn for Harley QuinnCreated to serve as "Joker's Girlfriend" as well as his primary minion for Batman: The Animated Series, Harley Quinn quickly grew to be one of the most popular characters of that show, eventually finding a solid life beyond the cartoon in comics, movies, and media. as her film tanked at the Box Office (even if critics all seemed to enjoy it) and the global pandemic of COVID-19 is putting a vice on the comic industry. The one bright spot, it seems, is her television series which is still the crown jewel of the DC Universe streaming service (although we'll get back to that in a bit). 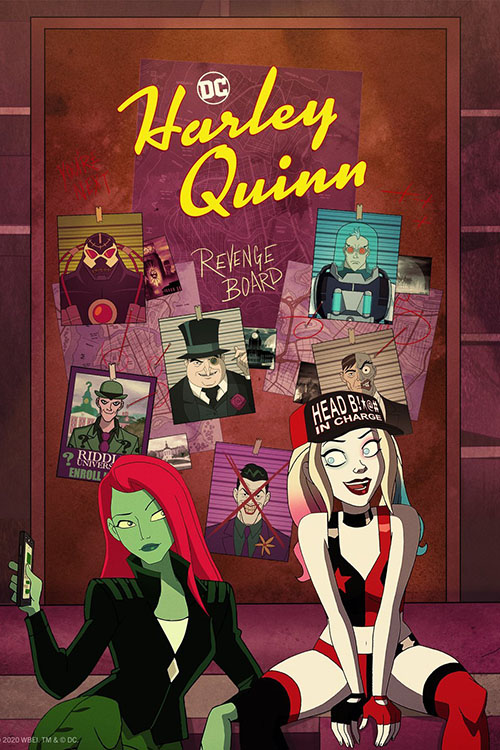 Of course, the first season of the show was absolute magic, a mad-cap collection of violence and humor, accented by a fantastic voice cast that really made the material sing. At the time I was amazed that DC would allow a series like this on the air since it was so amazingly crass and bloody, but DC doesn't seem phased by it. If anything, the second season has just gone further with the material, letting the cartoon's freak flag fly as it continued to explore Harley's life and relationships.

Relationships are the big part of the series this season. At the end of last season, once the destruction of Joker tower settled, both the BatmanOne of the longest running, consistently in-print superheroes ever (matched only by Superman and Wonder Woman), Batman has been a force in entertainment for nearly as long as there's been an entertainment industry. It only makes sense, then that he is also the most regularly adapted, and consistently successful, superhero to grace the Silver Screen. and JokerOne of Batman's first villains, and certainly his more famous (and most popular), the Joker is the mirror of the Bat, all the insanity and darkness unleashed that the hero keeps bottled up and controlled. are missing (along with most of the Justice LeagueThe premiere team at DC Comics, their version of the Avengers (which actually came before the Avengers and, really, has existed in some fomr since the early 1940s), the Justice League is the team-up to end all team-ups, featuring some of the most popular, and longest running, characters in all of comics history (and also Booster Gold).). Harley looks upon this as the perfect time to take over the city -- she helped bring down the Joker, after all -- and its time for her to be the new Queen of Gotham. Only problem is that the remaining villains -- Two-Face, Riddler, Penguin, Mr. Freeze, and Bane -- don't want Harley involved in their schemes. They've carved Gotham into five districts and cut Harley right out of all of it. Now, instead of fighting to be a part of the Injustice Society she has to fight for the throne of Gotham.

That's not the only complication, though, as Harley also realizes that she has feelings for Poison Ivy. A chance kiss between the two friends leads to feelings Harley has trouble dealing with. Knowing her friend, and her unpredictable nature to boot, Ivy realizes she can be with Harley, and this sends the mad clown down a spiral of violence and mayhem. Ivy chooses to get married to Kite Man instead, and Harley has to find a way to live with this and abide by her friend's wishes. But will that really last or will the two villainesses end up driving off into the sunset together?

Harley Quinn's biggest strength in its first season was its willingness to do just about anything for a gag, no matter how violent or crass it might be. The show had very few lines (beyond censoring the word c*nt) and more than happy to gleefully play around in whatever cesspit of material it found itself wallowing it. It was all for good laughs, mind you, with nothing done for cringe humor of truly awful material. People could get their heads bitten off by a giant man-shark (who, it should be noted, have a wonderfully erudite attitude most of the time), but no one would go off on racist screed or the like. 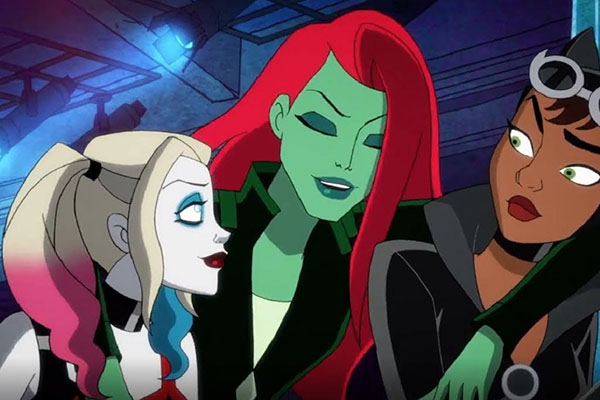 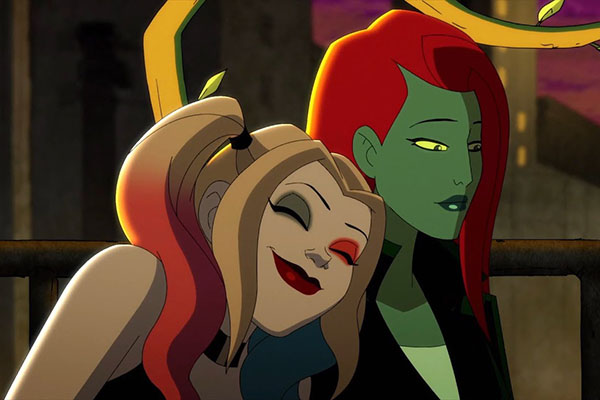 This same humor, and willingness to go anywhere, is still a big part of the core material in season two. The show is just as funny, just as hilariously wrong, in its second go-round as it was in season one, and that's fantastic. If you liked everything about the humor of the show in its first season, you'll have nothing to complain about in the department this time around. I laughed just as hard at the material, its off-color jokes and blood-splattered mayhem, as I did the first time around.

That said, I don't feel like the show had quite the same momentum this time around as it did last season. When Harley broke it off with Joker, she spent time building a team, earning her way into the Injustice Society, and then fighting everyone around her for another step up the ladder. She showed progress, and growth, and each new place she managed to claw her way towards felt earned. And then, for season two, the show basically pulls a reset button and puts her right back at the bottom of the totem pole of Gotham once more.

I get the desire for this; Harley needs bad guys to fight against, so why not have her battle the other villains of Gotham (as she becomes something of a vigilante anti-hero). At the same time, though, the villains she's fighting now are the same once she fought in the first season, and they're pulling the same crap the same way all over again. Watching her go through Gotham and take down each of the villains, one by one, is fun but it doesn't really feel fresh or new. A different villain, or a new scheme, could have added new life to this side of the plot line. You can basically tell even the writers realized they were treading the same material as, at around the half-way point of the season, they show quietly starts ignoring the old villains as it focuses more and more on Ivy and Harley.

This part of the show works much better and adds some much needed character momentum to the proceedings. Of course, if you've seen anything about Harley and Icy in comics in the last few years you know the two ended up in a relationship already, both of them being bisexual (although, of course, DC ComicsOne of the two biggest comic publishing companies in the world (and, depending on what big events are going on, the number one company), DC Comics is the home of Superman, Batman, Wonder Woman, and just about every big superhero introduced in the 1930s and 1940s. continually feels the need to screw around with the relationship, walking it back over and over again). It seemed inevitable, from that perspective then, for Harley and Ivy to eventually have sparks and settle into their own will they/won't they chemistry. The show at least is more than willing to let these two characters find each other and present the potential of their relationship as a good end and a solid point of growth for both of them. 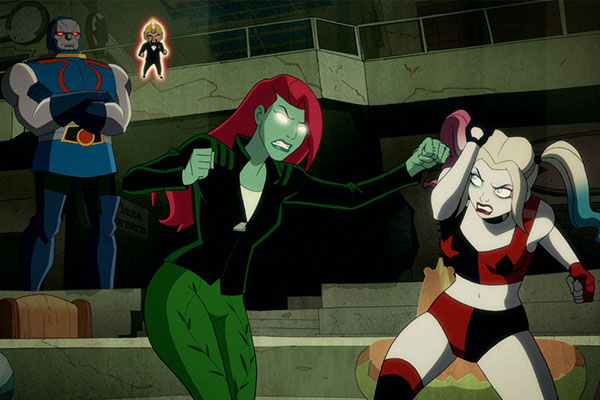 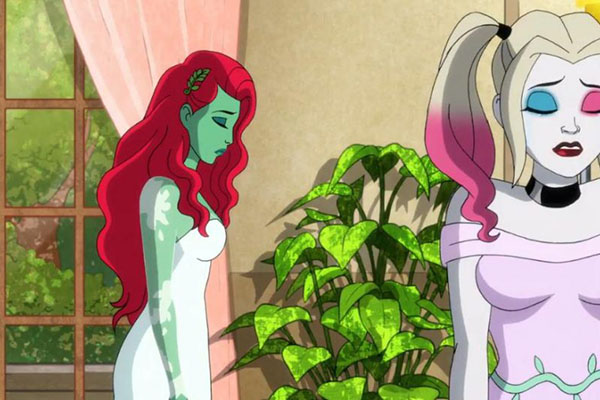 I dunno how fanboys feel about this relationship on the series. You'll always have some of them that grouse about representation and complaining about forced diversity in their nerdy works. The fact that Harley and Icy got together in the comics means they can't bitch about the show doing something the comics never did (although all the cussing and over-the-top bloody violence certainly goes beyond the comics), but it wouldn't surprise me if there's a contingent of nerd that hate this pairing. Personally I like the potential it can lend to both characters and the storylines it could provide, leading to a very different show for season three.

And, yes, there will be a season three. The weird thing, though, is that from all reports it won't be on DC Universe. At this point the season has been announced for HBO Max, Warner's new streaming service, where it will join episodes of Doom Patrol (and, maybe, Titans as well for that show's next season). The fate of DC Universe is feeling all but sealed for a number of fans at this point. If everything from DC Universe does even up moving over the HBO Max eventually that's fine by me, so long as I don't end up having to pay for two streaming services to get the media I was getting from just one before. But, end of the day, I'm happy Harley Quinn is continuing onwards. This show is the best thing DC Universe produced, and as long as HBO Max doesn't make any stupid changes to the series, keeping what works on its new home, I'll show up for it without question.