A Flash Between Worlds

While the Justice LeagueThe premiere team at DC Comics, their version of the Avengers (which actually came before the Avengers and, really, has existed in some fomr since the early 1940s), the Justice League is the team-up to end all team-ups, featuring some of the most popular, and longest running, characters in all of comics history (and also Booster Gold). is well represented in DC ComicsOne of the two biggest comic publishing companies in the world (and, depending on what big events are going on, the number one company), DC Comics is the home of Superman, Batman, Wonder Woman, and just about every big superhero introduced in the 1930s and 1940s. media, its sister organization, the Justice Society doesn't get touched upon nearly as much. Most of the time its roster of heroes is folded into JLA media (such as the Justice League Unlimited series), or they're referenced simply as an older version of the JLA in photos and newsreels. Heck the biggest reference the group had, up until now, was in Stargirl, and then they all get bumped off to make room for a new generation of heroes. 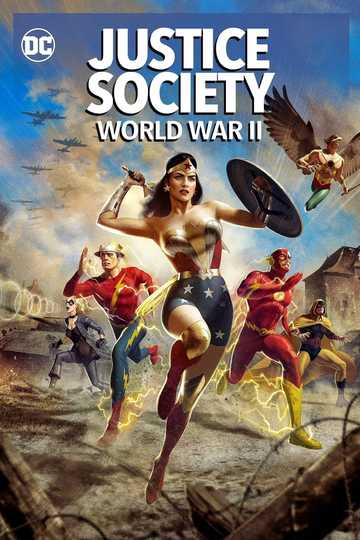 With Justice Society: World War II, DC actually changed that. Although billed as a wholly original film that doesn't tie into anything else, that's not 100 percent true; the film does actually tie into previous DC release Superman: Man of Tomorrow (leading me to think this is the start of another multiverse for DC). It's also not entirely original as the story clearly takes some inspiration from the classic crossover from way back in the day: Crisis on Two Earths, the classic The FlashStruck by lightning while working in his lab, Barry Allen became a speedster known as The Flash, launching an entire set of super-fast superheroes. tale where Barry Allen runs into another universe and meets the old, Golden Age version of the DC heroes. Naturally, if you know that comic you'll know some of the twists and turns that come along.

Whatever DC might bill this as doesn't really change the film for me, though. This is a light and zippy Flash tale that doesn't really get mired in the darkness and angst that so many DC works tend to fall into at this point (see also: DC Extended UniverseStarted as DC Comics' answer to the MCU, the early films in the franchise stumbled out of the gates, often mired in grim-dark storytelling and the rushed need to get this franchise started. Eventually, though, the films began to even out, becoming better as they went along. Still, this franchise has a long way to go before it's true completion for Marvel's universe.). While it has its dark moments (it is a film set during World War II), it manages to maintain a light, Silver Age feel to the proceedings. It's a solid adventure that helps to cement a new corner of the DC multiverse, all while showcasing heroes we don't normally get to see. In most regards, then, it's a total winner.

While visiting Metropolis with his girlfriend, Iris, Barry Allen suddenly has to dash off (as he does) to assist SupermanThe first big superhero from DC Comics, Superman has survived any number of pretenders to the throne, besting not only other comic titans but even Wolrd War II to remain one of only three comics to continue publishing since the 1940s. with a battle against Brainiac. In the process of fighting, Barry has to speed up to catch a nasty kryptonite bullet Brainiac hurls at Supes. Barry picks up so much speed, though, that he ends up running (he thinks) into the past, ending up in France in the middle of World War II and, much to his shock, there's a whole team of heroes there, fighting the Nazis on a secret mission: Hourman, Black Canary, Hawkman, and the Flash (the Jay Garrick version), all led by Wonder WomanLong considered the third pillar of the DC Comics "Trinity", Wonder Woman was one of the first female superheroes ever created. Running for as long as Batman or Superman (and without breaks despite a comic downturn in the 60s that killed superhero comics for about a decade), Wondie has the honor to be one of the longest serving, and most prolific, superheroes ever..

The team is initially distrustful of Barry, thinking him a German speedster, but Barry quickly gains their trust, assisting them in their battle. It isn't long that he's following along, helping them with their quest to find a secret contact that could decode an encrypted message that could lead to a treasure that would end the war. They need to get it before Hitler and his goons find it, lest the Germans end up with a power that could win the war for them, and change human history as we know it. 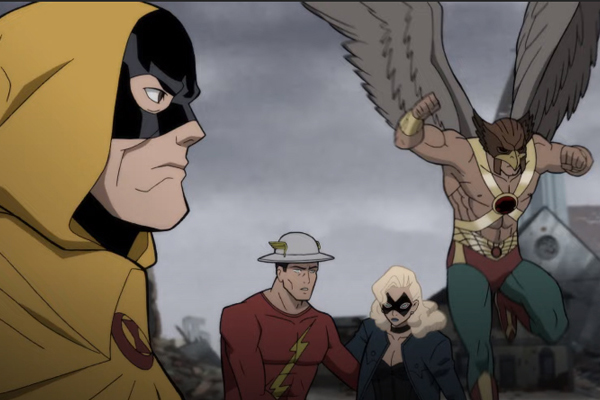 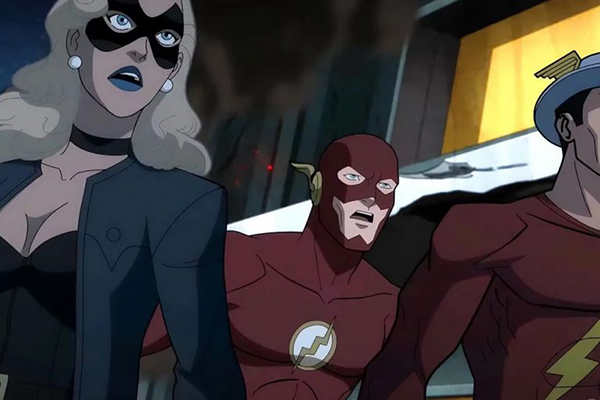 What I liked about this film, more than anything, as that it worked to highlight a lot of characters we don't normally get to see. Yes, it's true, we've had Wonder Woman as a constant presence on the big and little screens, and Flash has been around in the ArrowverseWhen it was announced that the CW was creating a show based on the Green Arrow, people laughed. The CW? Really? Was it going to be teen-oriented like everything else on the network and be called "Arrow High"? And yet that one show, Arrow has spawned three spin-offs, various related shows and given DC a successful shared universe, the Arrowverse on TV and streaming. for a while, even the versions of characters we see here are new to most audiences. We get the original Black Canary (Dinah Lance), the first Flash (Jay Garrick), an earlier incarnation of Hawkman, and Hourman who is ignored by almost everyone (except, again, Stargirl). The film does a good job of giving us a new take on the "Justice" group, and lets us settle in with characters we're hardly familiar with. After all the versions of the League, this was a nice change of pace.

What's more interesting to me, though, is the conspicuous lack of a specific character: BatmanOne of the longest running, consistently in-print superheroes ever (matched only by Superman and Wonder Woman), Batman has been a force in entertainment for nearly as long as there's been an entertainment industry. It only makes sense, then that he is also the most regularly adapted, and consistently successful, superhero to grace the Silver Screen.. We just discussed recently, for Batman: Soul of the Dragon, how DC likes to put Batman in anything. Perhaps they realized that Wonder Woman is good for that, too (and, yes, Superman shows up a couple of times), but while Batman did go to fight in the war back in the Golden Age comics, I found it refreshing that he wasn't somehow stitched in here, too. He's not a presence, frankly, that was needed and the film does just fine with the roster of characters it presents.

That said, one area that the film stumbles with is its villain. We have the Nazis here, but they're just a generic goon squad in this film. Instead the film focuses on a free agent hired by the Nazis: the Psycho-pirate (who is just called "The Advisor" here). His plan basically amounts to luring the heroes into a trap and then brainwashing AquamanRaised by his fully-human father, Arthur Curry has a history even he didn't know about until he grew: that he was the half-human, half-Atlantean son of the once-Queen of Atlantis, and was destined one day to be it's rightful ruler, the Aquaman. so he can use the armies of the sea to destroy the Allied nations. One problem here is that the villain is introduced a good act-and-a-half into the film and is given little development. He's presented as just another generic bad guy, one with meta-powers sure but never really made into an interesting character.

Meanwhile, is plan is little more than a riff on a story we've already see in DC's direct-to-video media, specifically Justice League: Throne of Atlantis. The whole last act feels like it was stolen from that previous Justice League film, with little difference made in the execution. That's a tad disappointing, all things considered, where there were so many other Golden Age villains they could have used and so many other storylines they could have take from that era. 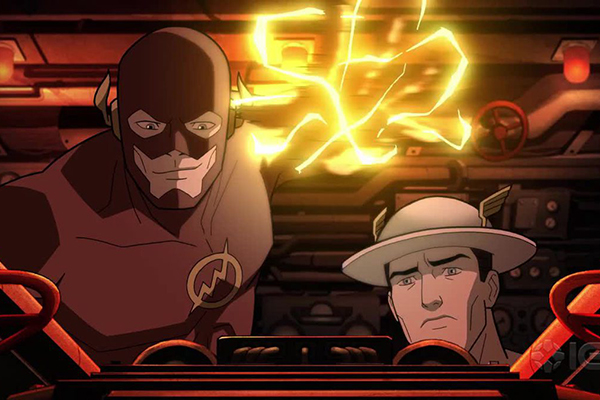 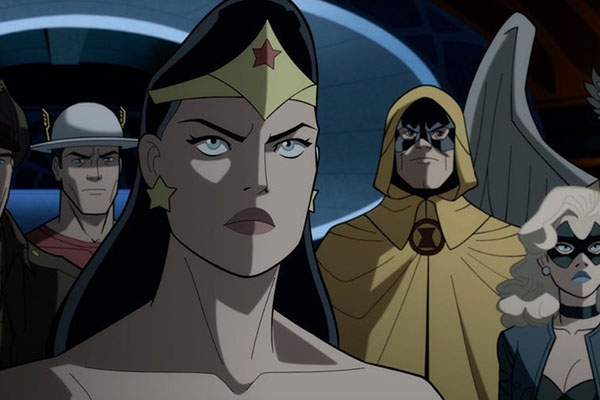 Still, even if the climax of the movie feels recycled, there's so much else that the film gets right. Matt Boomer is cast of Barry Allen here and he's perfect, bringing in a bright and cheery performance that really makes the Flash feel like a breath of fresh air. Again. DC can get mired in the darkness, but Boomer's Flash is quippy, energetic, and joyful. It's even better when he's paired up with Armen Taylor's Jay Garrick and the two start geeking out about Flash powers (something that happens more than once).

Really, the film has a lot of respect for all the heroes on display. Despite how goofy some of them can be -- Hawkman and Hourman in particular -- the film never looks down on them. Instead it takes their powers, and limitations seriously and turned them all into useful members of the team. This is a proper team-up film with every member pulling their weight, and none is every used as the butt of jokes (despite how easy it is to crack wise at a dude flying around with goofy wings and a mace).

Justice Society: World War II isn't a perfect film, but it does paint a solid future for where DC could go with this series. If this isn't just a one-off (or a two-off with that previous Superman flick) then I look forward to where DC is going to go with this pocket of the multiverse. It has a lot of potential indeed.