Superboy Is Kind of a Dick

There's been a trend in pop-culture to reevaluate the idea of SupermanThe first big superhero from DC Comics, Superman has survived any number of pretenders to the throne, besting not only other comic titans but even Wolrd War II to remain one of only three comics to continue publishing since the 1940s. -- what makes him a hero and would anyone other than Clark Kent, given those powers and abilities, actually end up a hero? It's hard to say who came up with this idea first -- Supes has been a shining beacon of American light for 80 years at this point -- but I'll credit DC ComicsOne of the two biggest comic publishing companies in the world (and, depending on what big events are going on, the number one company), DC Comics is the home of Superman, Batman, Wonder Woman, and just about every big superhero introduced in the 1930s and 1940s. themselves with first broaching the idea. Their Elseworlds brand has regularly released comics that change certain aspects of characters to see what would be different about them in this new settings and what remains the same. One of those most famous is Superman: Red Son, where Supes ends up in Soviet Russia and becomes the protector of the Motherland. It's a case of nature versus nurture, with Superman still being Superman at his core but given a different set of morals to work off of. 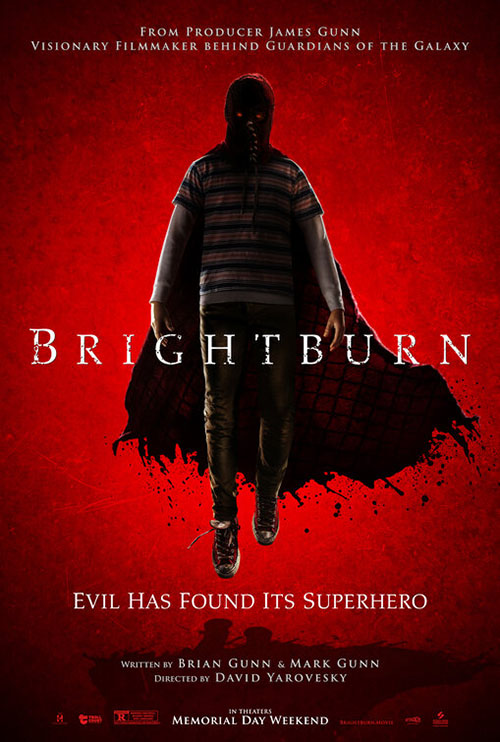 Go further out, though, and we start to find other characters given Superman's abilities but none of his moral fiber. Whether driven mad by the loneliness of being the most powerful person in the world, such as in the case of the comic book series Irredeemable, or simply not even starting as a good person at all, such as hinted in The Boys, these beings are as powerful as Superman but end up using their gifts for good instead of evil. It is into this part of the genre that the horror film Brightburn enters, a movie that postulates: what if the baby that would become Superman had actually been sent here are the first wave of an alien invasion? It's a concept that works well on paper -- seeing a version of Superboy that get progressively more evil as the story plays out is cool in concept, to be sure -- but given all the media that's come out with the same idea, the film ends up feeling less than fresh.

Brightburn opens with a loving couple, Tori (Elizabeth Banks) and Kyle Breyer (David Denman), having their evening disturbed by what, at first blush, feels like an earthquake shaking their house. Soon, though, they discover that an alien spaceship has crashed into the woods near their home. Without an FBI agents or other law officials immediately showing up to take the ship, the couple goes over and finds a human-looking baby inside. As they had been trying, unsuccessfully, to have their own kid, the adopt the baby as their own. We then cut to 12 years later where we find the boy, Brandon (Jackson A. Dunn), going the school, living the life of a well adjusted child. Things take a turn, though, when the spaceship hidden in the barn begins to light up, sending our Superboy messages, clearly reprogramming him. Soon he's making a costume for himself, creating his own logo, and then going around killing people (because the first step to being a homicidal superhero is brand identity)./p>

Quickly, his friends, family, and neighbors all being to realize something is wrong with the child, but his mother keeps sating she can get through to him, that he's not a bad boy. And, to be fair to here, there are still flashes of time where he son comes through and he isn't the homicidal little bizarro-Superboy. But the question remains whether or not she can get through to him. Is their SuperDamien still in there somewhere, or has their adopted son gone too far, never to be sweet and well-adjusted again?

Brightburn is clearly focused on telling a story about Superman, just an off-brand version of him. Not being privy to the discussions that took place when this film was initially pitched and shopped around, it's easy to see this starting off as an Elseworlds script, something the writers likely pitched to Warner Bros. before being rejected. And it's not hard to see why: though I do like the idea of a murderous Superman, this movie feels just a tad too off-brand for Warner Bros. While they're certainly willing to go dark -- Justice League: The Flashpoint Paradox went to some pretty gory places, for example -- it's quite another thing to have your most famous superhero ripping people limb from limb as he cuts a bloody swath across small-town Kansas. That's probably the main reason we see all the most recent "Superman, but Evil" stories come from third-parties. 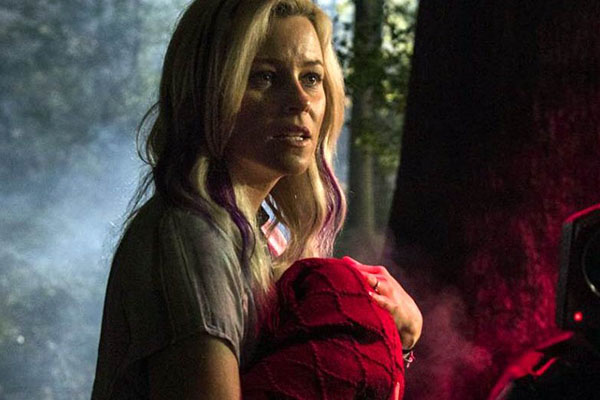 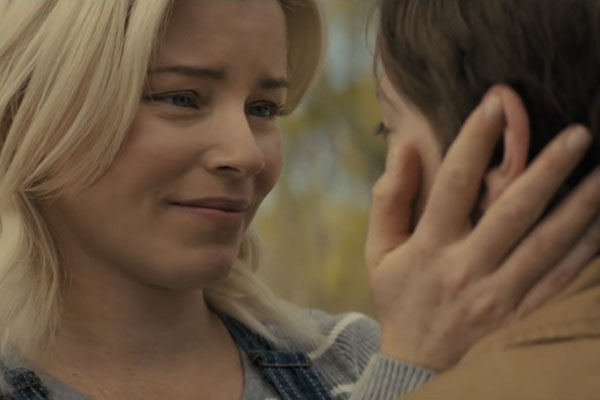 It does mean, though, that Brightburn can go to places DC Comics would never allow. It's freeing for the story, in a way, because it can do all the gore and terror it wants. Brightburn can craft itself into a proper horror story, really exploring the depraved depths Superboy could go to if he suddenly had no moral compass. But that's part of why the movie fails: it has the freedom to tell whatever Superman story it wants, go as dark and as terrifying as it needs to, but the movie still feels too safe, to caught up in focusing on the Superman part of "Superman but Evil" to really dig deep into the "evil" part of the equation. Partly that's because the body count for this horror film remains very low -- only six people die in the film, a very low body count for a film with this kind of killer -- but the film also seems adverse to showing us any really good gore.

The best kill is certainly the first, with our depraved Superboy going after a waitress that annoyed him, and we get some absolutely awful gory effects (stuff that made me cringe and I very rarely cringe). But from there, ever kill is a mash of CGI effects with very little in the way of actual scares. As I've noted before (see: The Thing, 2011), the best way to drive gore home is to use practical effects, and there were plenty of places were these more realistic, more palpable effects could be used. Instead, the film often goes for cheap-looking CGI which has none of the cringe-worthy power it needs. A shot where a guy loses most of his jaw in the movie should be grotesque to an extreme but, due to the gore, just looks silly. It robs the film of its horror.

But then, very rarely does the film actually go for the proper horror build up. A proper killer needs to stalk his victims, needs to let the dread the the terror build. Outside the waitress, there's very little build up, almost no time spent from the point our Supermurderer arrives and his next victim is offed. The sense of dread is never given time to build so the horror never materializes. Horror isn't easy, and a good scare takes skill. Brightburn, sadly, doesn't give have the people behind the scenes that know how to pull that off.

Without the horror, then, we have to explore the "Superman" half of the "Superman but Evil". here, too, the movie fails but not for a lack of ideas. I so really enjoy seeing a version of this story told from Superboy's perspective instead of Superman's. Usually it's the hero, weary after years of having to protect the sheep of the world, snapping and going evil. But by using Superboy we get a different perspective, nor that he's weary of the sheep but that he was never programmed to respect them at all. He's an alien invader sent specifically to soften the meatbags for eventually takeover. It's a great idea, but the movie doesn't really explore it well (at least not until the credits roll and we get to see the promise of a sequel that I doubt will ever happen -- in those closing shots the movie finally starts to really expand its ideas). With the setup of our Evil Superboy, the film then goes through all the same beats we've seen in other media in this genre. 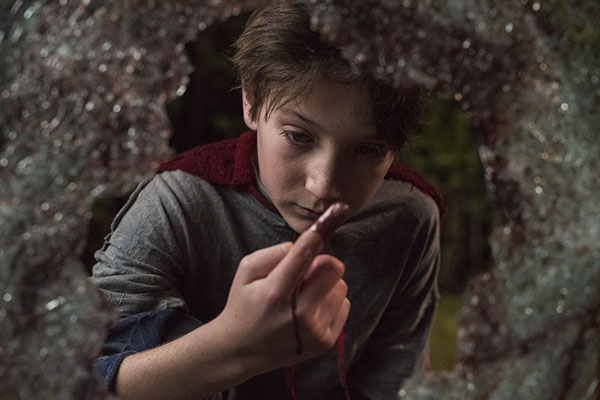 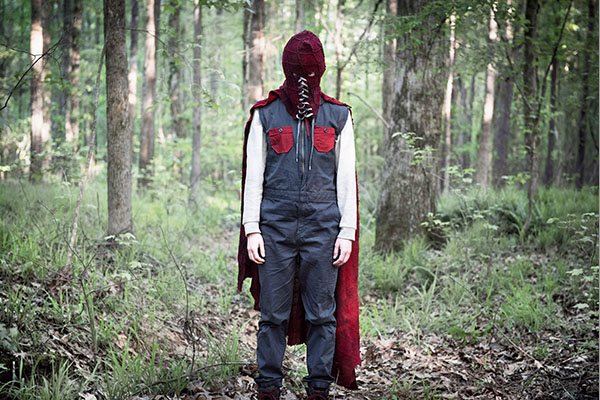 Think it would be cool to see Superboy blow out the back of someone's head? Well, it's also a shot we had in The Boys. Want to see him use his super strength and super speed to quick mow down people? Irredeemable also gave us that. Time and again we get scenes that are cool if you view this movie in a vacuum but, taken in the context of the genre, Brightburn doesn't really have much to say that's new. It's big invention is doing this tale about Superboy, not Superman, but after the initial impact of that idea wears off you realize that the film doesn't have much to say beyond it.

brightburn is a decently made, at times nasty piece of horror cinema. Unfortunately, for whatever reason, the creators just didn't push the concept as far as it needed to go. We've seen Superman, in some form or another, go bad multiple times at this point. We need more to make that concept at all fresh at this point or, at the very least, we need better horror to make it more terrifying. Brightburn delivers neither and is worse for it.