Superheroes a big business. That's not just a fact of the modern Hollywood landscape but also the entire point of The Boys, the new series from Amazon PrimeWhile Netflix might be the largest streaming seervice right now, other major contenders have come into the game. One of the biggest, and best funded, is Amazon Prime, the streaming-service add-on packing with free delivery and all kinds of other perks Amazon gives its members. And, with the backing of its corporate parent, this streaming service very well could become the market leader., which features a world of superheroes who not only save the day but also act as corporate icons. it then poses the question that if superheros are such big business, what happens when they go bad? And then it answers the question in bloody fashion. Ostensibly a very darkly humorous series, The Boys really wants to raise big questions about corporate superheroes and shine a light back on Hollywood in the process. While these are great questions to ask and points to make, the series struggles to really make a case, one way or the other, about any of it. 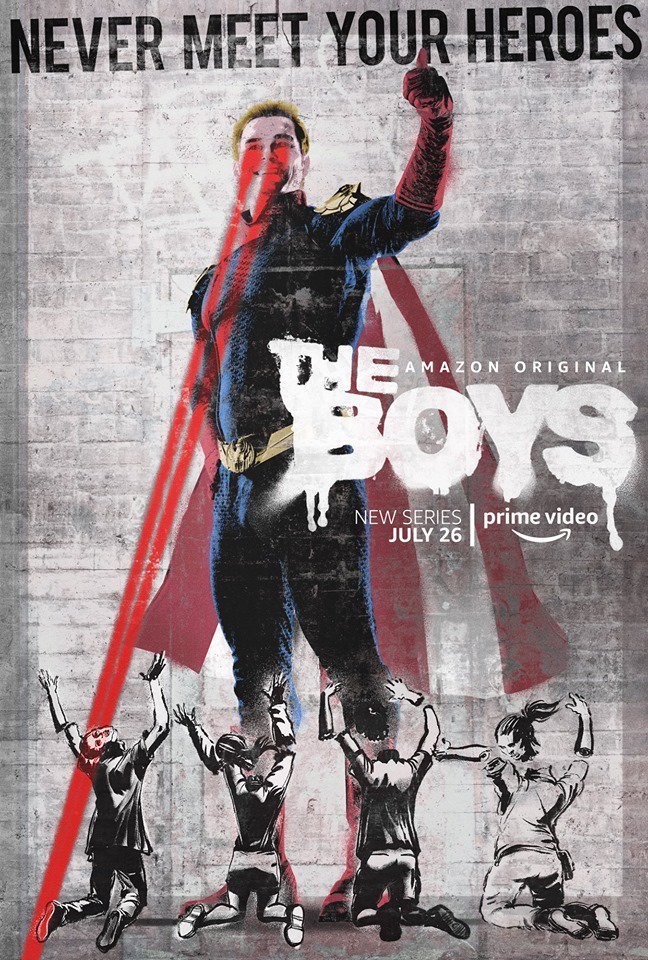 Think about it this way: you want to make a series that highlights the fact that the people making the most money off of superheroes right now (the elephant in the room, Disney and its Marvel Cinematic UniverseWhen it first began in 2008 with a little film called Iron Man no one suspected the empire that would follow. Superhero movies in the past, especially those not featuring either Batman or Superman, were usually terrible. And yet, Iron Man would lead to a long series of successful films, launching the most successful cinema brand in history: the Marvel Cinematic Universe.) are also the ones that could have questionable business practices and more than a few skeletons in their closet. To do this you have to treat the superheroes as real characters (because no one wants to watch a bunch of suits sit in a boardroom and discuss morality of their comic book lines). And then you have characters fight the superheroes, crack jokes, and do all the things people normally do in superhero media. It creates a tonal dissonance of both wanting to be part of the genre and above it at the same time, the kind of tightrope any show would struggle to navigate. It's a balance The Boys is never able to achieve, and because of that that show never really gets its footing.

In the world of The Boys, the greatest superheroes in the land are The Seven -- Homelander (basically ultra-American SupermanThe first big superhero from DC Comics, Superman has survived any number of pretenders to the throne, besting not only other comic titans but even Wolrd War II to remain one of only three comics to continue publishing since the 1940s.), Queen Maeve (a Wonder Woman type), The Deep (low-rent Aquaman), A-Train (a speedster, a la the Flash), Black Noir (maybe a play on BatmanOne of the longest running, consistently in-print superheroes ever (matched only by Superman and Wonder Woman), Batman has been a force in entertainment for nearly as long as there's been an entertainment industry. It only makes sense, then that he is also the most regularly adapted, and consistently successful, superhero to grace the Silver Screen.?), Translucent (essentially the Invisible Man), and new addition Starlight -- who are run by corporate parent Vought International. Meanwhile, down among the normal people we have Hughie (played by Jack Quaid), just a dude who worked at a Radio Shack-like tech business until, one day, A-Train literally ran through Hughie's girlfriend, Robin, right in front of Hughie. Soon after, Hughie is contacted by Billy Butcher (Karl Urban) who wants to help Hughie get revenge on A-Train. Soon, Hughie is working with a team, going deep on some dark missions -- kidnapping, assault, murder -- all in the quest to make every superhero pay.

Except then, by chance encounter, Hughie meets Annie (Erin Moriarty) who just so happens to be Starlight. The two hit if off, becoming more than just friends. Butcher sees this as an opportunity, a way to use this super-heroine to gain info on Vought and the Seven, but all Hughie wants is to date this new, nice girl and maybe move on with his life. Things, of course, get complicate as Homelander begins to get suspicious about the anti-superhero crimes going on right under his nose. Pretty soon the team is outed, their lives torn apart, and Hughie finds that his past sins might just come back to haunt him.

The series quickly establishes that just about every superhero in the world is morally corrupt (except, as it so happens, Starlight, who is a genuinely nice person). Every superhero is out for themselves and, more often than not, lets their absolute power corrupt absolutely. Against that we have the Boys, lead by Butcher, who aren't any better. Butcher has his own single-minded determination to get revenge on Homelander (Antony Starr) because Homelander (apparently) raped and murdered Butcher's wife (although as we'll eventually learn, things may be a bit more complicated than that). He goes to great lengths to stop the heroes, letting his own moral compass become just as corrupted as the heroes he's fighting again. Then we have Mother's Milk (Laz Alonso) who lies and ignores his family for "the cause" and Frenchie (Tomer Capon) a drug dealer and all around bad guy who's also the team's tech expert. These aren't people you root for, no matter how bad the heroes may be, because they aren't any better. 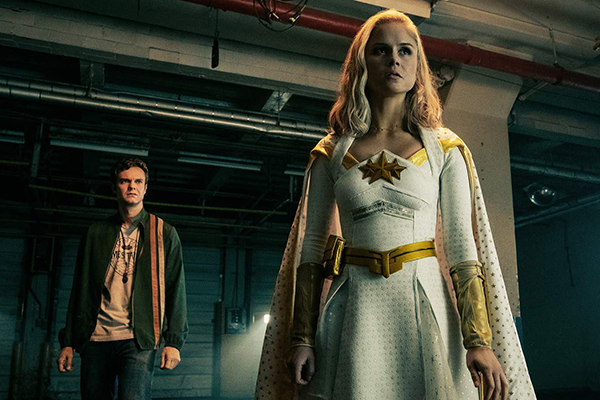 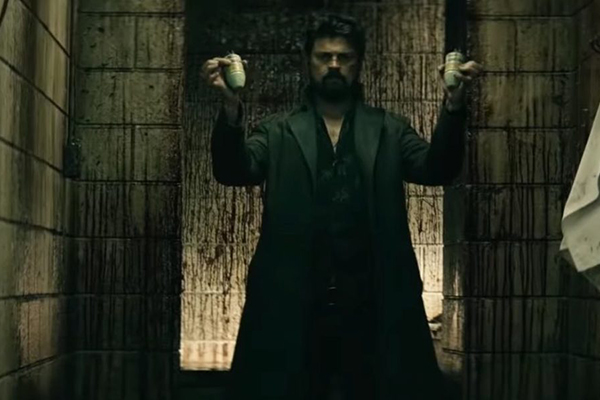 The only two "good" characters in the movie are Hughie and Starlight. Of the two, Starlight is the only one I could really root for simply because she really does remain uncorrupted. Naturally, then, a show as grimy as this (with its own bent moral compass) has to start things off for Starlight with blackmail and assault against her by The Deep (Chace Crawford). After that, Annie is sent spinning, not sure about what path she wants to take or if she can even remain a part of The Seven after what happened. Hughie, then, becomes her own emotional touchstone, giving her advise that then allows her to refocus herself, fight back against The Deep and, eventually, corporate parent Vought, to remain her truest self. Starlight has a great storyline (well, after you gets past yet another woman suffering in a superhero show) and I really liked where the show was pushing her after all the big revelations and confrontations were had.

And it's not like the series doesn't realize its playing with fire when it has its female lead suffer a sexual assault. Certainly it's well known that women are regularly "fridged" in superhero media. Keeping the focus of an entire storyline on Starlight and not just dismissing it or reducing her afterwards does seem like the series is trying to invert the fridging trope. Hell, it goes so far as to constantly ruin The Deep's life, more and more, after what he did. Still, it's an off-putting foot to start Starlight's storyline and, deep down, the show never really recovers.

That's in part because so many sexual misdeeds happen to the women on the show more than the guys. Women are regularly thought to have been raped, or have to subvert their sexuality. Even when they are the aggressors, the show quickly turns the tables on then, leading to awful consequences (and, eventually, death) for them afterwards. Only The Deep suffers any sexual comeuppance while the rest of the guys on the show remain free to have sex and not "pay" for it afterwards.

In fact, consequences don't really seem to be a factor for the male characters on the show. More often than not, the Boys get themselves into one scrape or another and, somehow, come out the other side just fine. Even after their identities are burned and they have to go on the run, the entire team still seems fine, all things considered. Sure, they lose their homes and their loved ones, but when we barely every see these characters interacting with their loved ones or visiting their homes, the are consequences without weight or merit; facts to tally, not concepts we actually feel. 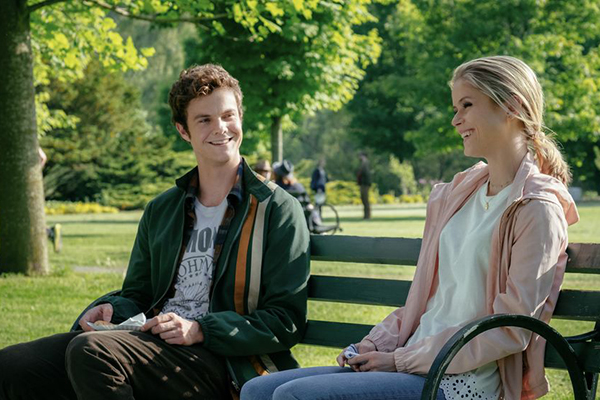 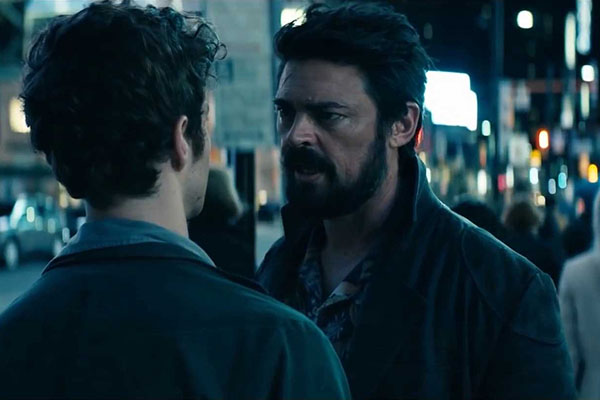 Some of the fault also lies with the villains of the show, the superheroes. Most of them, outside of Starlight, aren't really all that interesting. Sure, Homeland is an impressive figure and the concept of Superman going bad has some weight gravitas to it... if not for the fact that the whole idea of Superman going bad has already been addressed repeatedly before this show hit the air, not only in comics like Irredeemable but also in movies like Hancock and Brightburn and it basically acted as the core of Batman's plot line in Batman v Superman: Dawn of Justice. At this point the concept of a "Bad Superman" isn't innovative.

As for the rest of the Seven, we have a bunch of underwritten characters who barely rise about their tropes. Maeve is Queen of someplace ill-defined and never explored (and who's also probably gay but we barely touch upon that). A-Train is basically the Flash, but black, which kinda-sorta lets us touch upon the world of African American athletes (or would if the show really wanted to explore it). Black Noir never says anything and barely does much at all. Translucent is actually an interesting character for two episodes, but then he's blow up by Hughie. We really don't have any good villains to work with.

The best villain the show has is Billy the Butcher, but even then the show really wants to try and find a way to redeem him and keep him as a core hero. It wants to be bad and say, "he's addicted, driven to find and kill Homelander," and yet it constantly tries to show how his actions make sense based on his storyline. He might get punished but then he gets back up, refocused and re-energized. I'm not sure what point the show is trying to make with Butcher (and maybe the show doesn't know either).

What it all amounts to is a muddled mess that goes in a lot of directions but never really says anything. I watched the whole first season but I can't really say I enjoyed it; there are parts that interested me, like Starlight, but so much of the show just seems to revel in its blood and violence (of which there is a ton) but it never does it for any real purpose. Superheroes are bad, we get it, now do something about it instead of faffing about for eight episodes without really accomplishing, or saying, much of anything. I want to like The Boys, but it just didn't give me much to work with.