Lifestyles of the Rich in the 1950s

The Marvelous Mrs. Maisel: Seasons 1 and 2

For a while I avoided watching this show. I will fully admit that I am biased sometimes against romantic comedies; that's not to say those movies are bad, but I can't always relate to the characters (and not just because I'm male), so the stories don't tend to hook me. A show like The Marvelous Mrs. Maisel (streaming on Amazon PrimeWhile Netflix might be the largest streaming seervice right now, other major contenders have come into the game. One of the biggest, and best funded, is Amazon Prime, the streaming-service add-on packing with free delivery and all kinds of other perks Amazon gives its members. And, with the backing of its corporate parent, this streaming service very well could become the market leader.) has to fight an uphill battle to hook me not only because it has the trappings of a romantic comedy (which, at least in the first season, it really isn't) but also because of the creative team behind it. 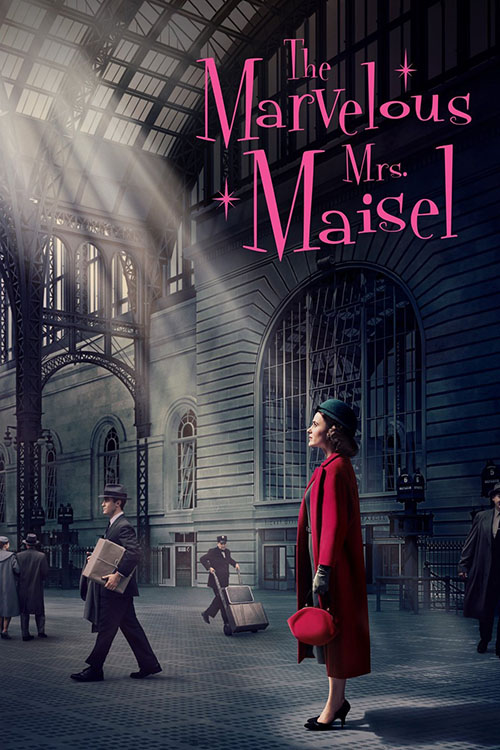 The Marvelous Mrs. Maisel is produced by the same creative team behind the long-running WB/CW series, Gilmore Girls (specifically Amy Sherman-Palladino and Daniel Palladino). That was another show I actively avoided when it first debuted, but my wife at the time (now ex-wife) wanted to watch the show so eventually I broke down and watched it with her in reruns on ABC Family. It was... okay. I didn't hate the show, the dialogue was at times pretty good, and there were a number of amusing characters. And yet the show always felt like it was trying to hard, putting on this over-the-top perspective of small town life and the antics that occur with in. It wasn't a sitcom, but it had that similar sitcom-style heightened reality. It was, at times, quite tiring (especially in the later seasons).

I did eventually watch the Netflix revival of that show as well (because once you've watched 7 full seasons of a show, you're pot-committed for four more episodes), but my opinion didn't change. That's why I went out of my way to avoid the creative team's next show, Bunheads (which I heard was good, but meh), and then similar tried not to watch The Marvelous Mrs. Maisel. I just didn't have it in me to be tired by another heightened reality, no matter how good the dialogue was.

And yet, I had friends that convinced me to give the first season of The Marvelous Mrs. Maisel a watch after it initially debuted. I will admit that I was pleasantly surprised -- they show worked pretty well, in its own way, and was a fun little watch the first time through. Of course, a second season has just recently debuted, so I took it upon myself to not only watch the new season but to go back through the first as well to refresh myself on the story before diving into the new episodes.

The Marvelous Mrs. Maisel, set in the late 1950s, tells the tale of Miriam "Midge" Maisel (Rachel Brosnahan), wife of Joel Maisel (Michael Zegen) who is an office worker by day and aspiring comic by night. Although he wants to be a comedian he is, in short, not very good. After he bombs one of his sets, he lashes out at Midge, talking about how he doesn't want the life he has (the job, the apartment, the wife, the kids) and leaves. In a drunken rage, Midge then goes to the club where Joel would always perform, and she unleashes her own rapid-fire, stream-of-consciousness set, killing the crowd. This leads her to hook up with aspiring manager Susie Myerson (Alex Borstein) and start up a possible career as a stand-up comedian. 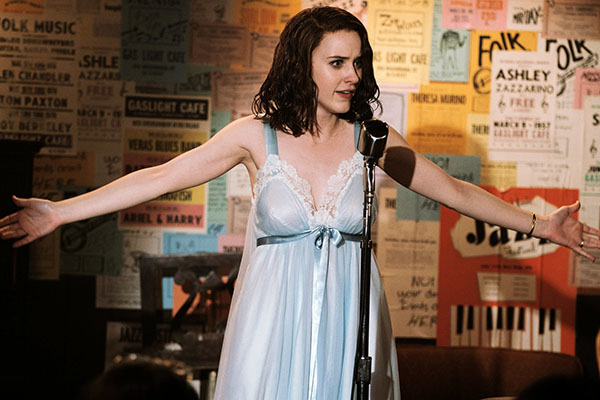 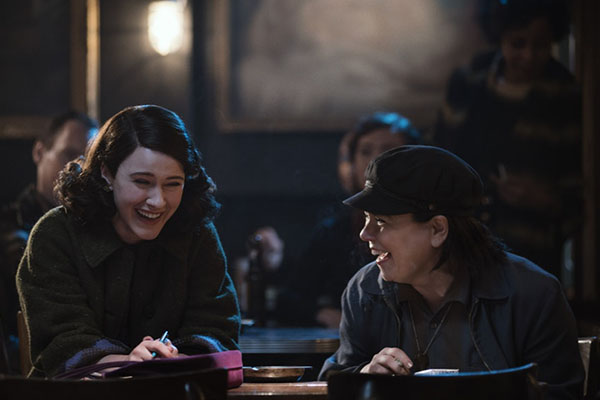 For the most part I do rather enjoy the first season of the show. The dialogue is whip-smart and rapid fire, all anchored by Brosnahan's performance as Midge. In the wrong hands, with the wrong actress, Midge would come off as obnoxious, the center of her own universe where everyone has to bend to her cute, cloying will. To be sure, the character verges on that cusp regularly, always just shy of being too much for everyone around her, but Brosnahan sells it.

Plus it helps to have such great character actors around her, like Tony Shaloob as Midge's father, Abe Weissman, and Luke Kirby as (actual real comedian from the era) Lenny Bruce. These actors help to ground the setting while feeding off the heightened atmosphere of the show. It all just works.

What also works is most of Midge's jokes while on stage. Sure, her personal life is the focus of much of the show -- such as whether she's going to get back together with Joel or not -- but it's when Midge gets on stage and lets the words fly that the show regularly finds its zip. In the first season Midge is funny in a casual way that never feels forced (except for the one episode that shows Midge bombing in a two sets that just don't work), leaving the audience waiting for her next great stand-up bit.

That said, one of the things I honestly have issue with is the shows spotty attitude towards its Jewish characters. Midge, her family, and her ex and his family are all Jewish. Most of the time they're handled well, with the Jewish culture a background to very normal stories. And then you get characters like Joel's father, Moishe Maisel (Kevin Pollack), who's essentially one big Jewish stereotype writ large. There are a number of instances of this, of characters that are just one personality detail that they harp on over and over, but it's most irritating when Moishe is on screen because the only joke about him is that he's a cheap tightwad that always works (even on the holy days). 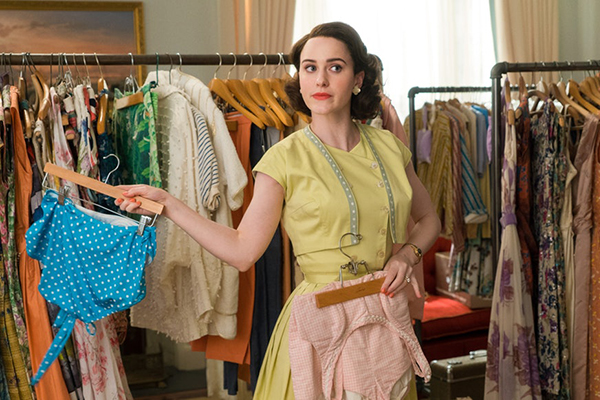 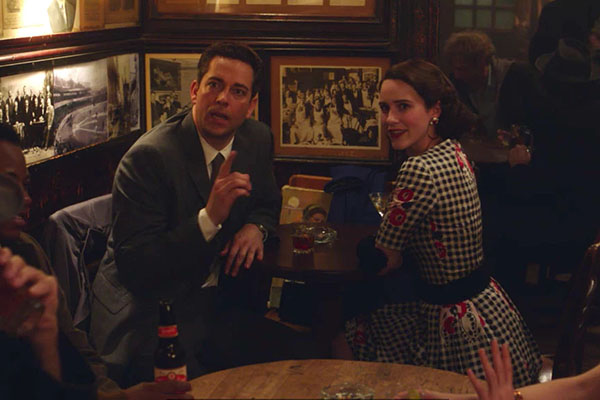 Still, going in to the second season of The Marvelous Mrs. Maisel I had hopes that the second season would maintain the light, funny attitude of the first season and find a way to downplay the parts of the show that don't work. Instead, though, the series felt like it was verging more and more into Gilmore Girls territory as the 10 episodes played on. The series picks up soon after the end of the first season, with Midge just coming down from the high of her biggest performance yet. Sadly, she and Susie are still having problems booking gigs for the comedienne as club owners don't want to take a female comic seriously. This would be solid plot line to follow on its own, but the Midge of season two seems blissfully unaware of the job she has to do to sell herself to the comedy world.

Instead of focusing on her burgeoning career, The Marvelous Mrs. Maisel takes an extended time following Midge to France and then to the Catskills, two settings that don't really shade our understanding of the new Midge that's supposedly emerging after Joel left her. These settings feel like backsliding for the character, forcing Midge to play the rich and pretty socialite without a care in the world. They're at odds not only with the character we should be getting by also the tone of the first season of the show -- it's rich-people fantasy porn when the show should be wallowing in the grime of the comedy scene.

Plus, to be frank, Midge just isn't as funny this time around. Her bits aren't as good, with the jokes killing the audience inside the show, but only illiciting chuckles from the guy sitting on the couch. The show keeps telling us Midge is a great comic (specifically name-checking her as "marvelous" more than once) but it's hard to see it in most of her sets this time around.

The show is also just scatter-shot in its plotting. It's here, then it's there, with Midge high on fame and attention in one scene and then miserable over a cut-short set in the next. She laments the comedy world, saying she hates everything about it, and then never mentions it again the rest of the episode. Tonally, the season is all over the place which makes it hard to care about Midge, Susie, or any of the other characters lingering around them. 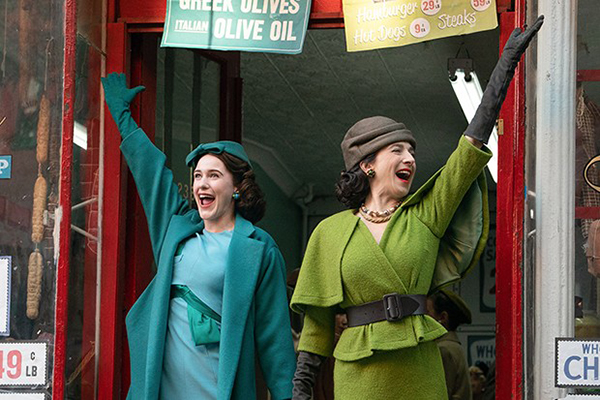 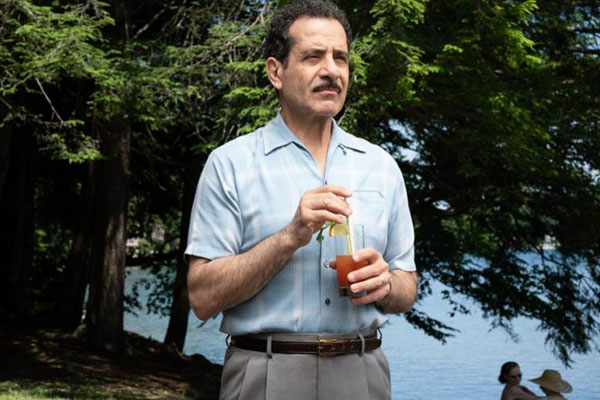 It sucks, too, because the two leads are still trying to wring everything they can out of the material. Brosnahan and Borstein are fantastic actresses, and they can sell all their material, helping to paper over the cracks in the show's foundations. The season almost works despite its flaws because of these two, but it never quite gels together no matter how hard the two women try.

By the end of the season I found I wasn't cheering for Midge anymore; I was just tired, much like I was after most episodes of Gilmore Girls. So, I guess, in a way that does specifically determine who would enjoy this show now: if you loved the weird, heightened reality of the Gilmores then more than likely the antics of Midge and her friends will continue to suit you just fine. If, like me though, You just want a show much more like the first season of The Marvelous Mrs. Maisel, the new season may not be for you. Sure, it was fun in places, but it never reached the heights of the first set of episodes.

Put another way, The Marvelous Mrs. Maisel is going to have to do a lot for me to really care in third season. If it can't turn itself around after that, I'm probably out.