I'm a fan of DC ComicsOne of the two biggest comic publishing companies in the world (and, depending on what big events are going on, the number one company), DC Comics is the home of Superman, Batman, Wonder Woman, and just about every big superhero introduced in the 1930s and 1940s.. I have noted this more than one. But while I've generally kept up with DC's line over the years (at least until the line-wide "Rebirth" which rebooted continuity yet again and I took that as my excuse to bail on the universe), I didn't read exclusively DC. I kept up with a smattering of other comics, largely ones suggested to me by my friends that worked at comics stores (as they tended to read everything and knew what was good). That's how I got into Image Comic's Invincible fairly early into its run (I think I started reading it when its fourth trade was on shelves) and fell in love with the story. 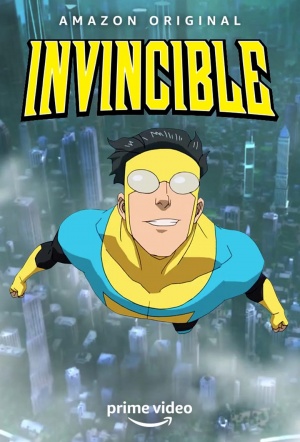 We've discussed over the years a number of "like SupermanThe first big superhero from DC Comics, Superman has survived any number of pretenders to the throne, besting not only other comic titans but even Wolrd War II to remain one of only three comics to continue publishing since the 1940s. but..." stories, such as The Boys, Brightburn, and even Megamind, and in some ways Invincible tells a similar tale. We're introduced to Mark Grayson, in the comics, a teenager living under the shadow of his father, Omniman. Omniman hails from a distant planet, Viltrum, and he was sent to our planet to protect it, and its people, from dangers external and internal. He's our last, best hope against a world ending threat, and all Mark wants to be is like his dad... except he's never gotten his powers. Mark has all but given up on ever getting them when the comics start, and it takes a good, long while before Mark suddenly gains them.

What this does, in the comics, is introduce a kind of "Superman and Superboy" dynamic. Mark develops his powers, and his persona (that of "Invincible") over the course of the first couple of arcs and it's only by the end of the first big event that the truth is revealed: Omniman is not the conquering hero but a conqueror, sent by the evil Viltrum Empire to prime Earth for domination. This twist takes Omniman from Superman to super-villain in our eyes, and when its finally revealed to Mark is sends a shock wave through the whole series, changing everything and setting a new course for the series going forward.

Borrowing heavily from the comics (it's executive produced by series writer Robert Kirkman and even drawn in the same style as the comics), the new Amazon PrimeWhile Netflix might be the largest streaming seervice right now, other major contenders have come into the game. One of the biggest, and best funded, is Amazon Prime, the streaming-service add-on packing with free delivery and all kinds of other perks Amazon gives its members. And, with the backing of its corporate parent, this streaming service very well could become the market leader. series Invincible more or less covers the same arc. The goal of this first season of the show is to get us to the same place as that early arc of the comics: to reveal to Mark who Omniman is and just what he's really on Earth to do. That's a good hook for the series and something the TV show can build on going forward (as it's already been renewed for a second season). That said, I have some qualms with the way the show sets everything in motion. Overall I think the series is good, but some early flaw keep this first season from being quite as good as it could have been.

The first big issue I had was with the pacing. Specifically, where in the original series it took time for Mark to get his powers and, when he finally did, it felt like a big achievement, here Mark (voiced by Steven Yeun) gets his powers within the first act of the first episode of the series. Admittedly the season is only eight episodes long so they had to establish things pretty quickly if they wanted to get to the Omniman arc up and running, but this speeding up of the timeline means that we don't spend a lot of time with Mark, the person, before we suddenly end up with Mark, the hero. 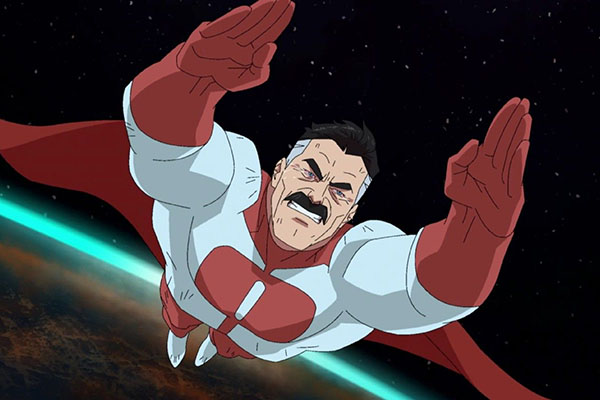 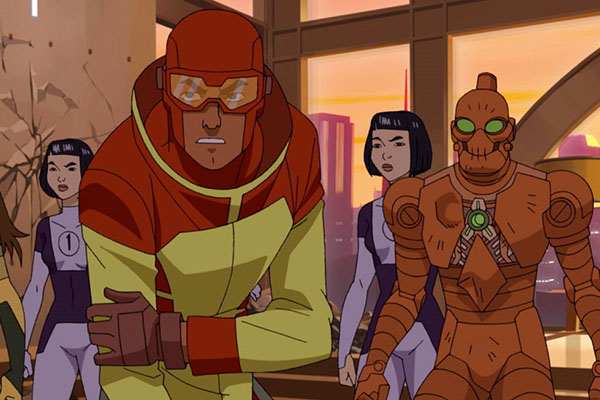 The sped up pacing also means that a lot of characters that we probably should spend more time with -- Mark's Dad Nolan / Omniman (voiced by J. K. Simmons), Mark's Mom Debbie (Sandra Oh), his best friend William (Andrew Rannells), his girlfriend Amber (Zazie Beetz) -- end up getting the short shrift. We spend much more time with Mark as a hero than we do learning about him and his friends that his personal life feels secondary to his heroic life. That's actually a flaw the comics eventually end up with as well, but here in the early run we need to have that time so we can enjoy the quiet moment and learn about our lead. It takes a lot of time for Mark to come into focus as a person before the show is in a rush to get to all the cool superheroics.

It also, in a way, blunts the big reveal of Omniman's evil nature largely because we don't really see him do much that's heroic before he goes off and becomes a villain. I don't consider it a spoiler to say he goes evil because that happens at the end of the very first episode, after we've only seen him do one heroic thing. We need time to start thinking of him as Superman before we learn he's really, what, Space Hitler, that way when the hell turn comes it feels like the ultimate gut-punch. At best it's a slap in the face and lacks the real impact it should have had.

In that way I feel like the show really should have spent a season just letting us slowly learn about Mark and Nolan and everyone else. Spend an episode on Mark as a regular guy before, right at the end of the episode, he suddenly gets his powers. Spend a few episodes with him training with Nolan, learning how to be a hero. Slowly acclimate him to the hero life and introduce him to other teenage heroes. Then, when Nolan goes off the deep end and starts killing superheroes (as he does, secretly, at the end of the first episode here) you can contrast that with Mark getting accepted into the Teen Team. Nolan kills his allies as Mark makes allies; it has a nice symmetry to it.

All that said, there is a lot I liked about the season once we got into the superheroics and starts just letting Mark (quite literally) fly. The action itself is really quite goo, with the art and pacing of the show giving us dynamic, colorful and, frankly, quite gory superhero action that had weight and (very bloody) impact. This is a show that lets you feel every super-battle, and while the amount of gore on screen might turn off some people, it is true to the comics, so fans of the printed version will likely appreciate that the series keeps to its roots in this regard. 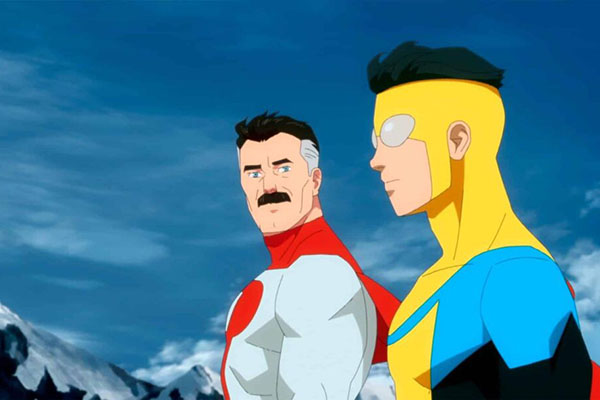 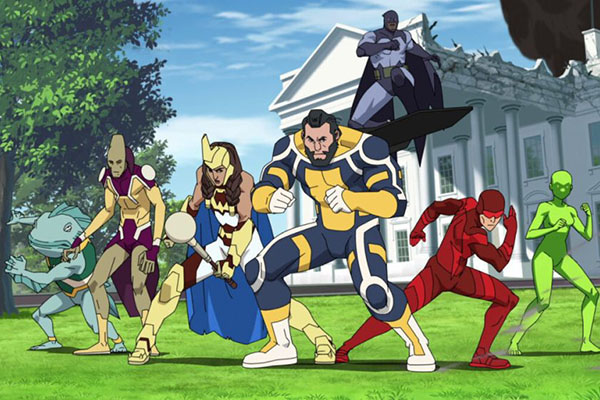 My complaints aside, the show does manage to find that right Neo-Silver Age style that the comics also managed. It does have a certain level of hyper-violence, but that's contrasted with a light sense of humor and bright, colorful heroics. It's the show trying to keep what happens on the screen grounded, in a way, but showing that people that have these powers can cause real damage, but then it lets them blow off a bit of steam and act like real people. That same light touch was in the comics and the series manages to preserve that here as well.

I did, in general, really enjoy the first season of Invincible. The first two episodes of the show move too quickly for me just because I know how the pacing worked in the comics and I felt like it was better on the printed page. Once past those two episodes, though, the shows settles into a groove and really works. It's not perfect but it has solid room to improve, and between the solid art and a fantastic voice cast -- including voices from Zachary Quinto, Jason Mantzoukas, Mark Hamill, Clancy Brown, Walton Goggins, and Gillian Jacobs -- this is a show that could really start to soar from these humble roots.