When last we checked in with this show it was right after the second season had debuted on Amazon PrimeWhile Netflix might be the largest streaming seervice right now, other major contenders have come into the game. One of the biggest, and best funded, is Amazon Prime, the streaming-service add-on packing with free delivery and all kinds of other perks Amazon gives its members. And, with the backing of its corporate parent, this streaming service very well could become the market leader.. I wouldn't say I was necessarily interested in the show when it was originally announced -- another show from the creators of Gilmore Girls which was itself a show I thought was amusing (when an ex was watching it) but would never go out of my way to watch it on my own. Another show in that same vein, this time also a period piece about a Jewish comedienne, didn't exactly strike me as must-watch TV. But I had friends that sword by the show and I gave it chance. And, in its first season it was actually pretty decent. Funny and smart with the constant, motor-mouthed banter that made Gilmore Girls famous. 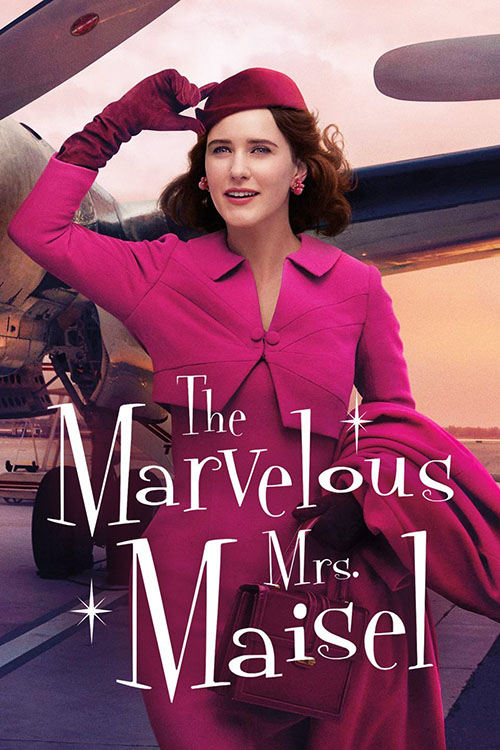 The thing was that second season didn't thrill me anywhere near as much as the first. Some spark was missing from the show, and maybe it could have been attributed to growing pains, a struggle to figure out where to take lead character Midge. Her husband had left her in the first season, and she'd taken to comedy (a pursuit he'd wanted to do but was terrible at while, by contrast, she was amazing at it), hoping to build a career out of making people laugh. But while it seemed like Midge was finding a way to make the comedy work, to use it to grow and better herself, second season felt like a backslide for the character. She got caught up in love, she fell back on patterns fueled by her rich family, and she seemed to struggle to find her reason for being a comedienne. Essentially, the show had lost track of the funny and Midge was dying out there.

In short: the show was so in love with Midge (it is called the Marvelous Mrs. Maisel, with extra emphasis on the "Marvelous" there) that it didn't really seem to want to hold a mirror up to her, to point out her flaws. Any problems she faced were from without, like another comedienne, Sophie Lennon, who had Midge blackballed. But Midge herself was allowed to pursue whatever avenue she wanted because, clearly, she knew what she needed to do and everyone else was wrong. Her life, one way or another, was going to fabulous.

It didn't help that the show was essentially 1960s lifestyle porn. Midge's family financially supports her so she can continue to life in a fabulous apartment and wear fancy dressed and flit off to parts unknown while her kids stay at home with the grandparents, barely seen or heard. Her mother has an existential crisis and flits off to France so Midge and her father fly over as well to life a few fabulous, carefree days in Paris. Midge has nothing better going on in the middle of summer, so her family goes off to the Poconos for three months of carefree living, all expenses paid. Her husband may have left her, but the only thing that inconvenienced Midge and her life was a broken heart. For one season that was enough, but by the end of the second season that was starting to wear thin. The hope, then, would be that the third season would find new stories to tell, to slap a new coat of paint on this show.

And, in a way, it did, just maybe not in the way (or as well as) it should have. At the end of last season Midge (a returning Rachel Brosnahan), having impressed famous singer Shy Baldwin (Leroy McClain), was hired to be the opening act for his show as he toured the country. This put Midge on the road for weeks on end, away from her family while also forcing her to find ways to connect with new audiences and generate new material. Meanwhile her ex-husband, Joel Maisel (Michael Zygen) is stuck at home with the kids and a dress-making business to run with his father. But Joel wants more, he still wants to get into show business somehow, so he decides to open a club for comedy and music and such, and then club he finds is deep in Chinatown (for a good price but with any number of caveats). And then there's Midge's parents, Abe (Tony Shaloub) and Rose (Marin Hinkle), who, due to Abe's decision to quit his job, now have to find new digs and new ways to finance their lifestyle. 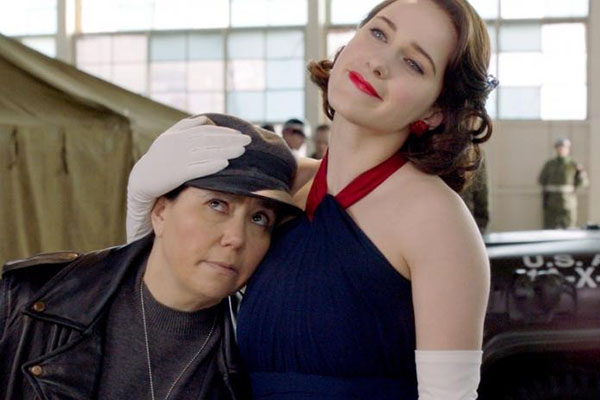 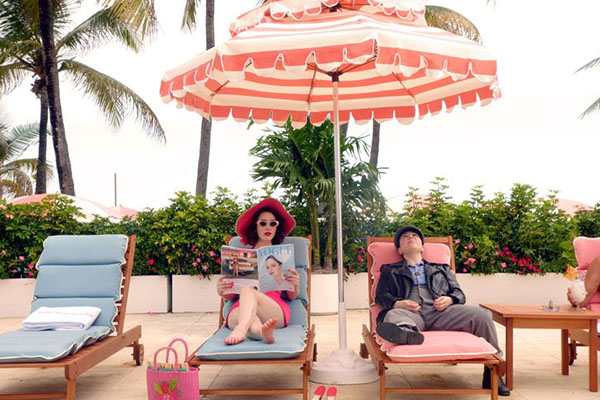 There are parts of Mrs. Maisel that show a lot of depth and maturity. Weirdly, the character that does the most growth over the course of the season is Joel, the ex. While the first two seasons played him as a kind of schmuck, an idiot for letting Midge go and desperate to try and recapture the girl, here Joel has started to come into his own. He left Midge because he wanted to find a way to be his own man and it feels like now that he's free of her shadow he's actually able to find himself, to be a success at something he loves. If they show wanted to tell us that he made a mistake leaving Midge it strongly makes a case otherwise this season.

When it comes to Joel, the aspects of the show I hate -- the fact that everything is too easy for the characters and that they get to continue living fabulous lives despite a lack of income or real plans -- doesn't apply to Joel. He has a successful job co-running his father's dress-making factory, and he clearly understands what it takes to run a business. If anyone is allowed to be free and happy, to live however rich and successfully they want, Joel is the one character on the show that's actually earned it. He shows up, does his job, and then dreams of his bright future.

Midge gets to live large and be fabulous all while making very little money. The show comes out tells us at one point how much she's making and while it's not small potatoes it's also not enough to live the way she does. If the show has her say, even once, "I get to splurge this time and then everything else goes into savings," I would have respected it so much more. But constantly she flits off to spend money, go shopping, invite people down to the hotel she's living at and eat all the room service they want, and not once is money ever mentioned, even when it's clear that she'll be paying for everything. It makes no sense.

Midge, though, is still doing better, story wise, than Abe and Rose. These two struggle to find any purpose this season. Their big plot line is that they have top move in with Joel's parents, Moishe (Kevin Pollak) and Shirley (Caroline Aaron), two hugely obnoxious people that no one in the show (or who watches it) can stand. Frankly, the show would benefit from quietly pushing the Maisel parents out of the picture as they're loud, rude, horrible stereotypes who add nothing to the show and, worst of all, simply aren't funny. Sure, they give Able and Rose people to play off of but I would have been much happier with Abe and Rose moving into a crappy 1-room studio so they could bicker with each other. 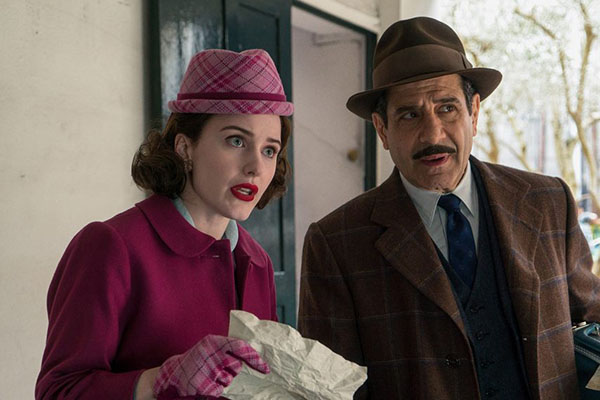 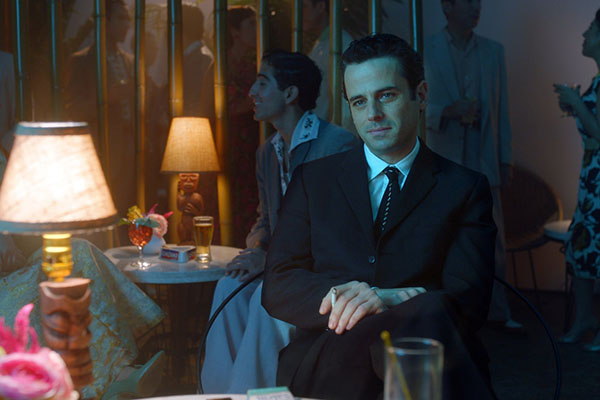 Beyond the Maisel/Weissman clan, the only character that gets much time (and any development) is Midge's manager, Susie Myerson (Alex Borstein). Susie is probably the best, most consistent character on the show, crass and rude and mean in the best possible ways. She's also the only insight into the way the "other side" lives as Susie is poor, broken, and struggling to get her business off the ground. Midge is her primary client but, after some struggles of conscience, she does take Sophie Lennon (Jane Lynch) on as a client. Sophie is a crass comedienne who dreams of opening a stately period drama on Broadway so Susie, being a good manager, does everything she can to make this happen. This show's real growth for the character, a real drive to better herself, and I respected the plot line she was given.

Problem is that the show doesn't really want to keep the characters moving forward. By the end of the season so many of them have backslid to where they were essentially when the show started (right down to Midge eying her old apartment) that you have to wonder what the point was of the last three seasons. No one has really shifted position all that far, aside from Midge and Joel still being split up (although with their chemistry I wonder how long that's gonna last), and everyone still gets to life their best lives.

The one shining light we had from the first season is gone, too: the comedy. If nothing else, Midge could kill it on stage but here, most of the joke she tells in her act are ho-hum. Instead of laughing along with the crowd I mostly just smiled. There was great comedy to be had in the show but it didn't really feel like it was coming from the on-stage bits. For a show about a rising comedienne trying to make it big, Mrs. Maisel is having a hard time showing us why the central character should be a star. Sure, she's fabulous, and pretty, and she can turn a phrase, but her act (as with the rest of her life) isn't really wowing me anymore.

There's a glimmer of potential adversity on the horizon for Midge as the season ends on a bit of a cliffhanger. What The Marvelous Mrs. Maisel need to do going forward is find a way for the the character to grow, for the whole series to grow. If ti wants to keep people engaged it needs to stop treading water and really throw some adversity at Midge (and the rest of her clan). Right now the show is somewhat amusing lifestyle porn; the first season promised so much more but the series has failed to find that potential for two years running. And, at this point, that shtick, like Midge's act, is starting to wear thin.