Let's be clear about one thing: The Tomorrow War is not a good movie, and that's not because of Chris Pratt. I mean, yes, it's because of Chris Pratt but not just because I don't like him. He's not a very good actor, and that comes across here as he's just playing yet another version of Andy Dwyer from Parks and Rec. (this despite him supposedly being an elite, one-time soldier and a genius-level scientist). But the fact that, in real life, Chris Pratt is a dick has nothing to do with it. He sucks in real life, but he also (in an unrelated manner) sucks here, too. 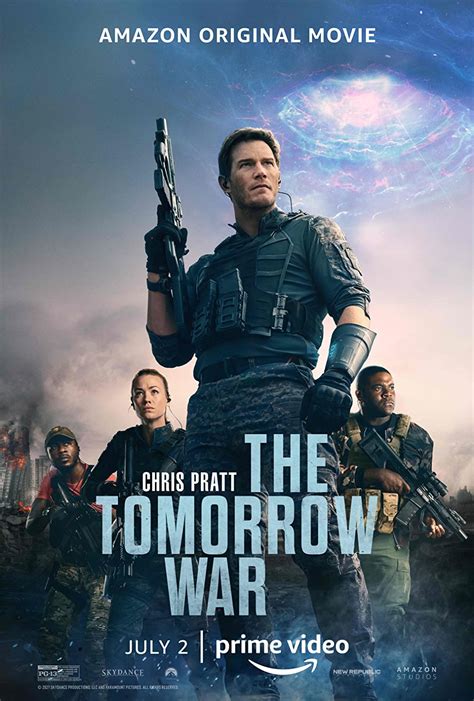 Chris Pratt isn't the only issue with the film, but he is indicative of the big issue. Paramount, the studio behind The Tomorrow War, saw Pratt and said, "you're famous for doing this, so we want you to do this, whether or not it makes sense in the film." And that basically summarizes everything that's in the film: it's a mish-mash of ideas from other, better films, all strung together to make something that feels like it was tested in focus groups and developed solely on feedback from there. It's not one cohesive movie but a whole melange of other films stitched together and strung along in one mutant mass. It's Edge of Tomorrow meets Predators meets The Thing and Evolution but with none of the creativity of any of those films.

We're introduced to Pratt's Dan Forester as he comes home to a Christmas party on the eve of potentially getting a new job that would take him away from his "bleak" life of being a well payed high school science teacher (he lives in a house large enough to suit a family twice the size of the one he has, and the school he works at is huge and immaculate). However, that Christmas, as everyone for some reason watched the World Cup (another unrealistic thing: Americans caring about soccer), a portal opens on the soccer field and soldiers from the future come through. They state that a war against aliens is taking place 30 years in the future and they need the countries of the present to send soldiers back to the future to help fight the aliens. Otherwise, the future if completely screwed.

Inevitably, Pratt's Forester is conscripted to go into the future to fight (for a week, as per the rules of the draft). He's on a research team that will work with researchers in the future to try and find a way to fight and kill the aliens. His flight into the future goes off the rails, though, and most of his team is killed. Then the research team is killed. Then he's called to a different sector so he can assist with the research. But the person who calls him in is, of all things, his daughter, all grown up (and played by Yvonne Strahovski). Her goal is simple: find the toxin that will kill the aliens and send it back with her father so they can mass produce it in the past and send it forward. The future just has to survive long enough for the plan to work.

The first issue with the film is that it lacks any sort of cohesive tone. The opening section is a warm, family-friendly comedy that smacks right into a war film. Then we get shards of Edge of Tomorrow (just with a father/daughter dynamic thrown in). From there it becomes Evolution back in the present as goofy scientists look for a way to hunt down the aliens when they arrive on Earth, and that all leads up to a different war film (shades of both versions of The Thing) as the heroes fight the aliens at the source. The film never settles on one thing but it's also very bad at being everything. 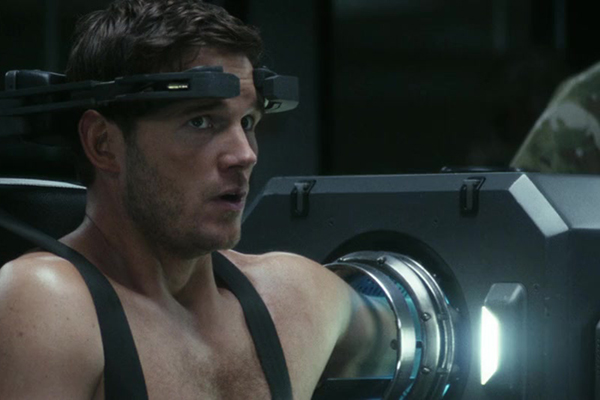 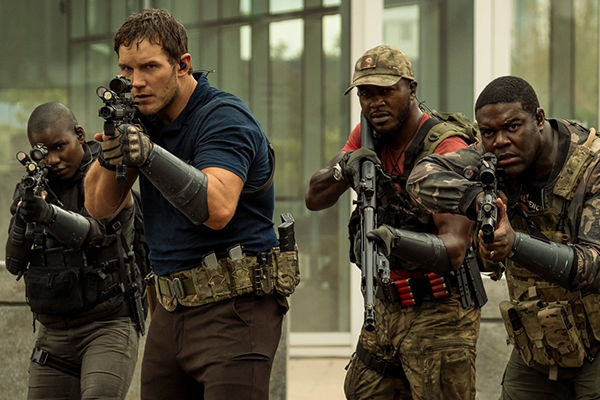 Any one section of the film, mind you, would have been great as it's own film. Pratt has solid chemistry with Sam Richardson, who plays environmental scientist Charley, and when the two get to play off each other and crack wise, the film has a light and funny tone to it. If we could have had an Evolution-style film of just them hunting aliens, that would have been great. Pratt is also good, in a serious way, playing off Strahovski; then, in their Edge of Tomorrow riff, made for a very compelling film. But the tonal whiplash of going between these sections, and all the others as well, just doesn't work. It's a franken-film, and a really horrible stitched-together one at that.

I have to think a lot of the issues stem from the casting of Pratt. He adds his own goofy style to the piece, and because of some of the other casting choices, the comedic sections of the film do come to life, but I doubt that was the intent. This feels like a (largely) serious film that was derailed the second Pratt came on board. With him in the lead, I'm sure the film was retooled on the fly to suit Pratt and his specific needs. A different actor would have brought more gravitas, and much less comedy to the role. Anthony Mackie comes to mind, and I think someone with his level of acting skill, and command of the screen, would have made a much better choice for Forester.

But there's also the simple fact that this movie is beyond stupid. Characters do things simply because the story tells them to, but they'll fluctuate back and forth between ideas as if they'd forgotten what they just said. Forester learns, when he gets drafted, that he's due to die in seven years (which, due to the bounds of time travel, makes him a perfect candidate to go to the future of 30 years later). When he meets his daughter and learns she went to MIT, he says, "I hope I was proud to see you graduate." Dude, you were dead. You can do math. You know this.

A lot of the things he says, and his motivations are like this. He finds a toxin that will kill the aliens and his daughter gives him the only vial. He then promises to come back and deliver the toxin even though he just watched nearly all of humanity get wiped out. As the film previously established, time travel is "one way" (i.e., a week spent in the past, or the future, is also a week spent away from the other era, one-to-one. The amount of time it would take to mass-produce the toxins would mean the future, that was basically already destroyed, would be completely destroyed by the time he gets there. The point isn't the save the future but to reboot it, but Forester is an idiot and can't accept that. 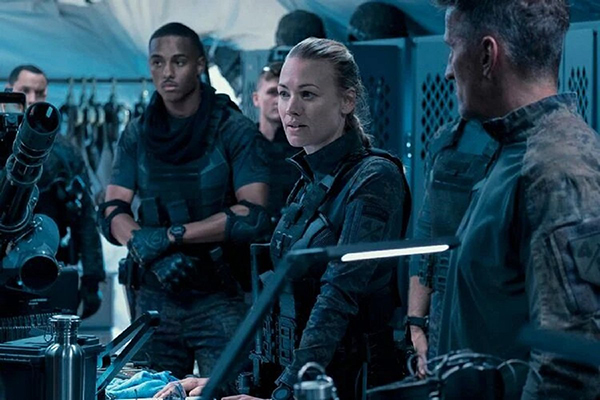 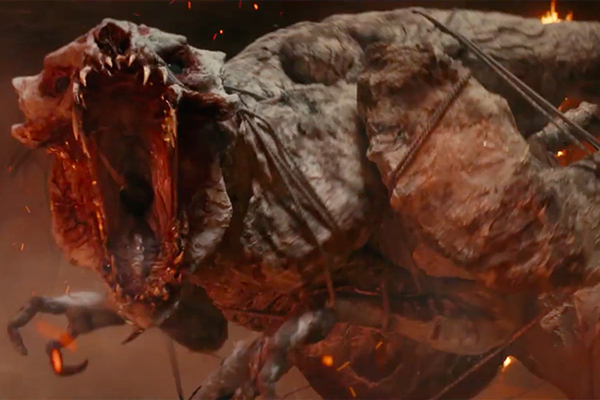 Seriously, I had some many times where someone did something, or said something, and I felt my eyes rolling back into my head from the sheer stupidity of it all. This is just a very dumb, but admittedly very pretty and well-shot, stupid movie. I supposed that's to be expected from Chris McKay who's directed the (not very good) The Lego Batman Movie and... well, not much else. This movie is like that Lego effort: more a collection of ideas than a cohesive whole.

There are the bones of a good film somewhere in The Tomorrow War -- hell, there's three or four good movies in here, all told -- the film just needed to settle down and tell one of them. it needed to be smarter, it needed to be stronger, and it needed to be better. I can see why, instead of putting this out in theaters (just waiting out the COVID outbreak and putting the film in halls once the pandemic was more or less passed) the studio solid it to Amazon PrimeWhile Netflix might be the largest streaming seervice right now, other major contenders have come into the game. One of the biggest, and best funded, is Amazon Prime, the streaming-service add-on packing with free delivery and all kinds of other perks Amazon gives its members. And, with the backing of its corporate parent, this streaming service very well could become the market leader. as they had to know just how bad this film is. In theaters this would have been a bomb but on Amazon this is practically the best thing they have on offer, which says just how bad this film is and how bas Amazon's current slate really is.