A Whole Planet of Pain

While the first Predator was a hit, largely on the back on the Governator ad his ever-present star power throughout the 1980s, the sequel, Predator 2, only managed to reap in the same amount of ticket sales $60 Mil off of twice the budget ($35 Mil instead of the previous $18 Mil). Whatever the reason people didn't turn out for a second Predator film, the studio assumed the franchise didn't have the legs to really win at the box office. So, for a time, it was put to sleep, at least for a while. 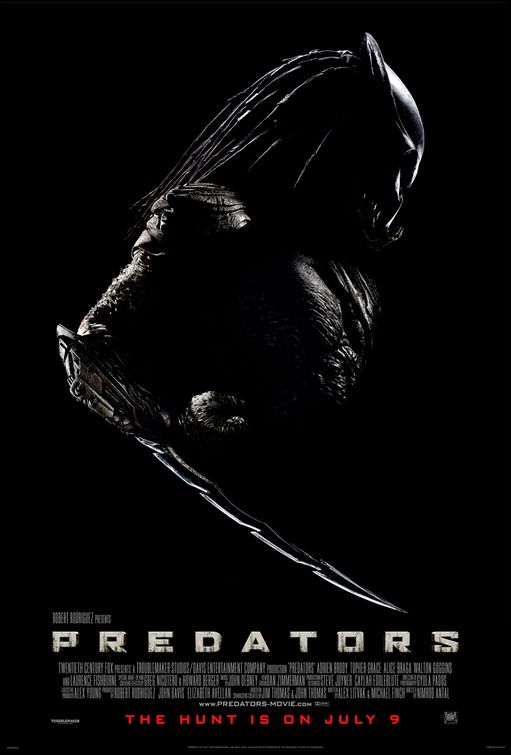 Although the franchise was dormant in theaters, it was lively over in comics, eventually spawning the obvious (and totally nerdy) concept of the Aliens vs. Predator franchise. This was part of a larger comics trend to cross any superhero with any movie villain, from Superman vs. Aliens to Batman vs. the Terminator and, of course Superman and Batman vs. Aliens and the Predator. As those titles were successful enough, it took a while for the crossovers to eventually merge back onto the big screen, which they did in two films: Aliens vs. Predator in 2004 and Aliens vs. Predator: Requiem in 2007. We aren't going to discuss those movies just yet (although we'll swing back to them eventually on the site), but I mention them now so you can see a clear evolution of the franchise.

Essentially, the series took the villain from hunter (Predator) to hunted (Predator 2) to eventual ally (AvP). At this point, where do you go with the series? In 2010 we got the answer when Robert Rodriguez took over the franchise for a semi-reboot. Essentially, as per a character in the movie, this sequel, Predators ignores everything that came after the 1987 original, making this more or less a direct sequel to that first film. The movie goes back to the jungle, drops in (quite literally) a group of soldiers (real bad-asses) and puts them up against a group of Predators to see who comes out on top.

The film itself is fairly light on plot (not unlike the original). We start with a soldier (played by Adrien Brody) who remains nameless for most of the film. He's falling through the air, seemingly having just been dropped out a plane, unconscious. He comes to, realizes what's going on, and manages to open his shoot just before hitting the ground. And he's not the only one as a group of soldiers and other fighters (mercs, drug lords, and the like) all come falling down around him, all not knowing why they're there or what to do. Oh, and they're all very heavily armed. Once they group up, the explore the jungle only to realize they're on an alien planet, and, essentially, that they're the game to be hunter, animals on a jungle preserve for a bit of sport. So they have to try and find a way off the rock any way they can.

The simple premise is a lot like the original film, and it serves this movie well, too. There's not a lot of worrying about civilians, no trying to solve a case or save the day. This movie is all about survival, trying to last one more day and see if they can find a way to escape the planet. When you think about it, it's even more stripped down than the original film. There's no fake-out plot, no intelligence to bring back to the CIA and, really, no escape. It's one long hunt and the movie really only ends when the hunted (or the hunters) kill everyone else. 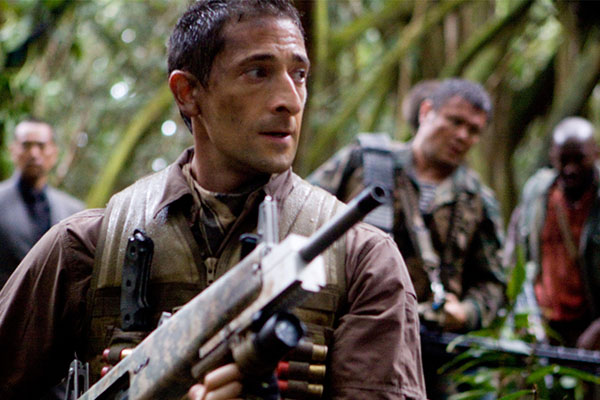 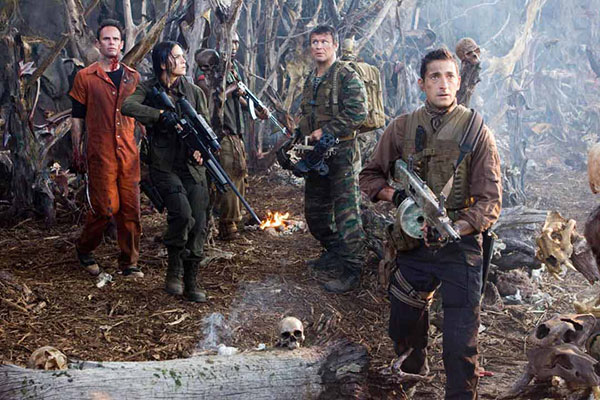 Of the characters introduced, there are really only three that make any real impact on the story. The first is Brody's nameless soldier. Nameless by choice, mind you, as he doesn't want to give out his name, doesn't want to bond with anyone else. This is a mission to him even if he doesn't know the rules or what the end-goal is. He has one job: survive. While no one would accuse Brody of being a natural successor to the Governator, I have to give him credit for making his role work. He's a real bad ass even without a similar imposing figure, and he's able to take the reins and be the bad-assed leader this team need. Watching the performance, you're reminded that Brody is an Academy Award winning actor for a reason -- this is his role and he owns it.

Similarly well cast is Alice Braga as Isabelle, a sniper with a heart of gold. While the other guys on the team are all, basically, villains, she's the one soldier in the group fighting for hearth and home. An Israeli Defense operative, Isabelle actually tries to care about those around her, views the other people in her group as an actual team, and wants to aid them not because they're vital to the mission but because they're people. She adds the needed heart to the party giving us a character we can actually care about, and that emotion is brought to the surface by Braga. This isn't an easy part to play -- part human, part soldier -- but she plays it very well.

I also have to commend Topher Grace. His character, Edwin, is seemingly in the group just because he's a doctor. We assume he's included simply for his medical knowledge -- every team needs a medic, right? -- but that knowledge isn't all that useful when you're fighting aliens with plasma blasters that can cut a foot-wide hole in a man's chest. Eventually we come to learn he's as much of a monster as everyone on the planet, and it's to Topher's credit that this heel turn actually plays well, isn't just some shift in the character that feels forced or inorganic.

I'm less sure how to feel about the Predators, though. Don't get me wrong, I'm not looking to have deep philosophical discussions about what the Predators are doing or how their governmental system works. The movie tries to make a few half-hearted nods towards these ideas and I largely tuned them out as it didn't really seem to matter (it certainly has little impact on the end of the movie, that's for sure). What we're then left with is a group of three predators (four if you count the one in the Predator camp that the other Predators seem to be punishing or something) who all stalk their victims from the shadows and, one at a time, kill or get killed. These creatures aren't supposed to have a personality we can identify with, but by having three of them in the group, I actually cared even less about them. 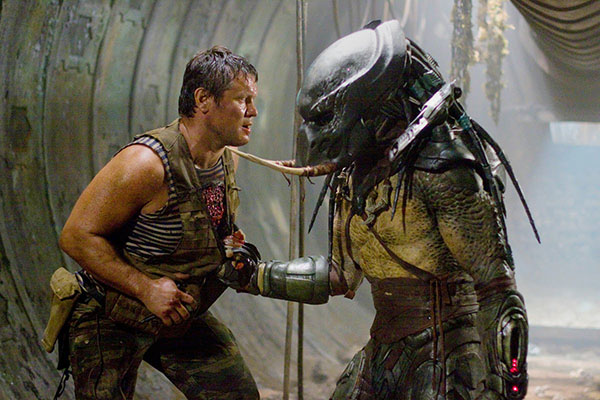 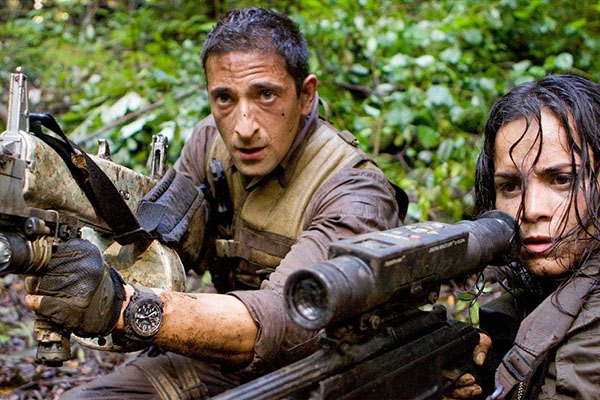 It was weird, really, to think on this. Why is one predator more fearsome than three? The answer is because the more Predators you put into a group of hunters, the less fair it seems to the humans. Why limit it to three? Why not eight, or twelve. How about 20-to-1 odds for the Predators? The first two movies understood the mystique of a single killer going to an alien planet (ours) and stalking its prey for the shadows. That's scary. Three of them that aren't even trying to really hide themselves? That's just not sporting, and is even a little boring really.

Still, on the whole I liked a lot of this movie. The party dynamics of the humans was interesting, and the fact that the movie gets to the action so quickly (cutting out a lot of similar cruft from the first film) means it moves along at a pretty brisk pace. A few more characters could have been given better background, a couple probably could have been omitted completely, and the movie would have felt tighter for it. It's a solid actioner, and a good watch. Just about the best sequel the original film has gotten. Sadly, from what the reviews are saying, the fourth official film in the franchise doesn't fair anywhere near as well. I guess we'll see soon when I'm able to get to the theater to watch it.