In the Land of Fairies and Monsters, London, N5V 0A4

I am not, normally, a big fan of high fantasy. Elves and dwarves and all their usual trappings don't normally do much for me (outside of a comedic series poking fun at those very trappings, like DiscworldAt first blush, the Discworld series seems like just a parody of fantasy literature. Dig into any of the books, though, and you'll find deep and funny tales of a world just slightly off from our own. A world that, yes, is a flat disc carried through space on the backs of four elephants that, in turn, ride on the back of a giant space turtle.) as I usually go in more for space battles and alien races than knights in shining armor besting ogres and dragons. I have watched many of the popular high fantasy series, like The Lord of the Rings (it was okay, but way too much walking) and The Chronicles of Narnia (I dug the dimension hopping at least), but by and large the genre bores me. 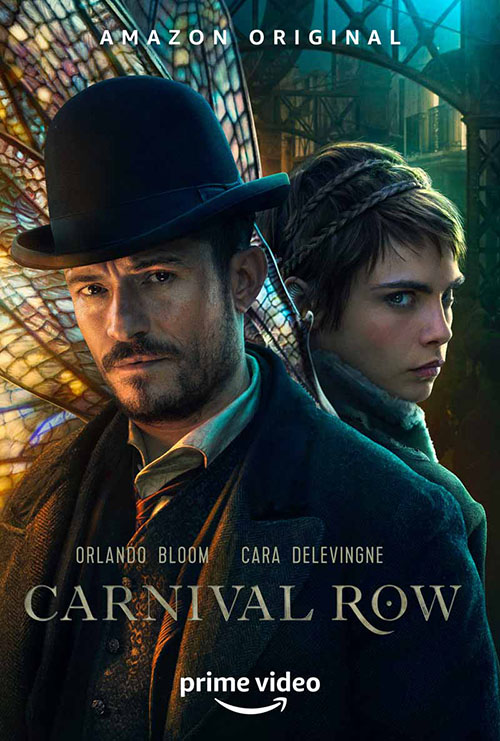 That the reason it took me so long to get around to watching Carnival Row, the high-fantasy meets English period piece that debuted last year on Amazon PrimeWhile Netflix might be the largest streaming seervice right now, other major contenders have come into the game. One of the biggest, and best funded, is Amazon Prime, the streaming-service add-on packing with free delivery and all kinds of other perks Amazon gives its members. And, with the backing of its corporate parent, this streaming service very well could become the market leader.. The concept of sitting through another series about elves and fairies, featuring Orlando Bloom no less (because he's draw to productions with elves the same way Russel Crowe magically appears in every historical epic), no matter how high concept it might be, made me want to watch anything else. Of course, we're at the top of a new year when there's very little going on with TV so, having caught up on just about everything else I could, I finally sat down to watch Carnival Row and see if it was worth the effort. And, in short, it was... eventually.

The show takes place on an alternate version of Earth (that may not even be called "Earth", come to think of it) where fairies and other mythical creatures (kobolds, satyrs, fauns, and so many more) actually exist. This world has seen a war between two factions, the Burgue (who largely hate the fae folk) and the Pact (a group of humans aligned with the fae). The Pact loses the war, leading the Burgue to take over the world (or, at least, the slice of it we see). The fae folk are treated as second-class citizens, subservient to their human masters, with little hop of escaping their lot in life.

The meat of the show takes place a few years after the end of the war, in the capital of the Burgue territory. The city is in the grip of fear as a series of grisly murders have been occurring. These poor people, human and creature (aka "critch") alike, have been torn apart by some kind of half-glimpsed beast, and police investigator Rycroft "Philo" Philostrate (Orlando Bloom) is on the case, worried about the human and faerie lives alike. That's because he has a secret only he and one other person, his ex-lover Vignette Stonemoss (Cara Delevingne), know: that he's actually half-fae, born with wings that were later removed when he was but a babe so he could blend in human society.

The murder mystery isn't the only story going on in the show, though, as it also ties in a story of societal intrigue as a wealthy fawn, Agreus Astrayon (David Gyasi), moves into the upper-crust neighborhood of Ezra (Andrew Gower) and Imogen (Tamzin Merchant) Spurnrose. This causes quite the stir as critches don't just move into these kinds of homes. But the animosity turns to friendship, and maybe even love, as Imogen and Agreus are forced together. And then there's the political intrigue at the highest levels as Absalom Breakspear (Jared Harris), Chancellor of the Republic fights off the moves of the opposition party, all while dealing with the sudden kidnapping of his son. And somehow, eventually, all these stories tie together in one way or another. 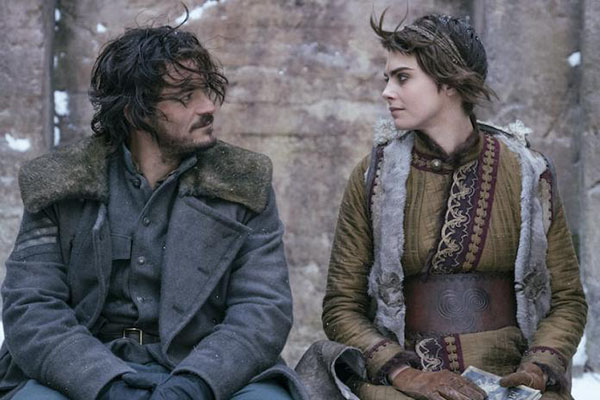 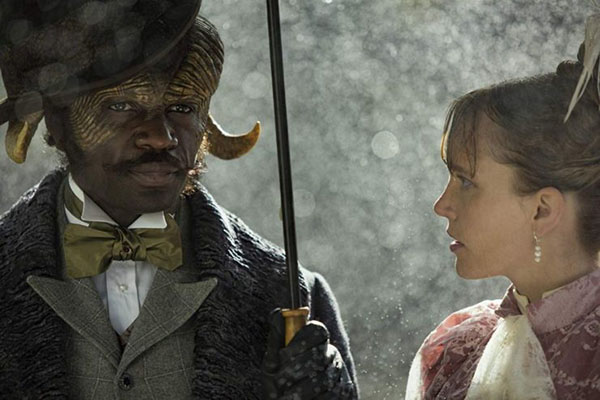 For the first couple of episodes Carnival Row comes across like a late 19th century British period-piece, a show set during the Industrial Revolution, but one where faeries and other fae folk actually exist. In fact, the start of the series reminded me a lot of Ripper Street, another show dealing with a series of grisly murders set during the Industrial Revolution. It's what made the first two episodes of the run the hardest to watch, actually, just because I'd seen all this kind of stuff before and, aside from inserting fae folk into the show, the series really didn't have anything new to say that a flood of other shows like it (such as Ripper Street, Peaky Blinders, and so many more) hadn't already said before.

Curiously, it's in the third episode, after we've already grown tired of the many characters on the show and their petty squabbles and secret mysteries, that the show finally gives us a flash back to the war itself to flesh out the characters and give us a reason to care. Here we get to find out what happened in the war, how the Burgue came to power, and what put Philo and Vignette together (and ultimately what drove them apart). Part of me was to the point of just shutting the show off after the second episode, it bored me that much, but this third story did such a good job of actually getting me invested in the characters and the setting that I plowed through the rest of the eight-episode run in short order.

Of course, it's after this episode that the various plot machinations all start to come together, when the murders take on a new twist, when all the characters start to encounter each other and all their ties are revealed. Eventually it's revealed that everyone on the show has some kind of connection to either Philo or Vignette (or both), and that's why we've been following everyone around. One one hand, this really works because (after that third episode) we're now invested in these two main characters. Giving everyone else some kind of connection to these two past (and maybe future) lovers allows us to invest in their stories as well, and the then show starts to pay off all their plot lines too. The back half of the season builds some real momentum because of it.

At the same time, though, it started to bother me that everyone in the series was somehow connected. One or two minor notes between characters is one thing, but eventually everyone involved was either part of this conspiracy, or that character's parent, or the murderer on the loose, and you start to marvel at the fact that there are so many people in the city but these eight or so characters have every connection in their lives among the other seven. It's a touch too convenient. 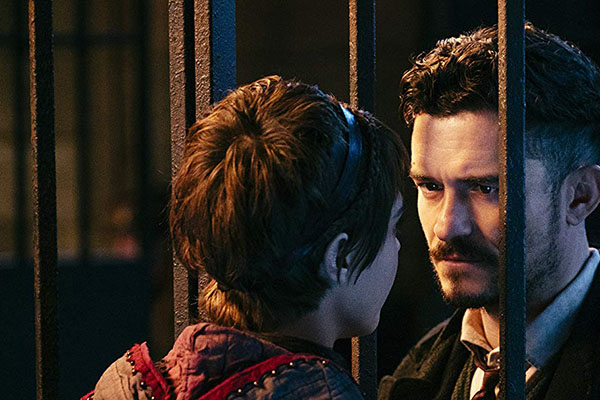 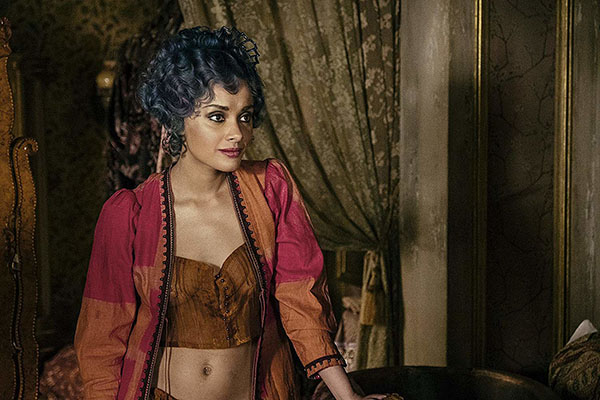 Also, this show does check off one of the biggest tropes in fantasy fiction: the poor, destitute hero that's secretly the savior of the world. Early in the run of the show a prophecy is mentioned, one that will eventually tie Philo into the storyline of the Chancellor and his family, and it's mention often enough over the rest of the season that it's pretty obvious this prophecy is going to be the overarching story for the series. It would be interesting if so many other fantasy works (as well as any number of anime and manga) have done this exact kind of storyline before. It would be more interesting if this prophecy ended up turning out to be nothing, but somehow I doubt that's where the show is headed. It would be more interesting than what the show has planned, mostly because every twist and turn in this story is easy to guess episodes before its revealed.

At this point I'm still torn about Carnival Row. As a show trying to be "the next Game of Thrones" (as so many fantasy shows are described now), it has all the basic trappings you'd expect: murder, intrigue, and lots and lots of nudity. It has an interesting premise (once you get past the first two episodes) and a path it could take forward that might eventually become a good story (if the show would stop telegraphing it so far in advance). But it is clear that the show-runners are still working out the kinks in their story, trying to figure out how to get the pieces to work together and become a better show. The bones for a decent run going forward are there -- good setting, decent performances, solid ideas -- so with this first (pilot) season out of the way let's hope they can bring it together.

For now, Carnival Row is a tough recommendation. I enjoyed it well enough (once I got to the third episode and beyond) but I also know it's hard for a lot of people to get invested in a show if the first couple of episodes suck (and that's fair as I'm often the same way). I hate saying, "get past the first season and the show gets really good," because who has that kind of time (especially if they aren't writing for a site like this)? If the second season (which has already been ordered) ends up being phenomenal, Carnival Row could be a must-watch for everyone. For now, though, it's something most should check out only if they have a lot of time and nothing better to watch.