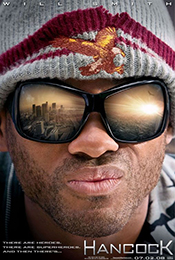 John Hancock (Will Smith) is an unpleasant drunk. He's unpleasant to talk to, objectionable, anti-social, prone to fits of temper, and in need of a good shave and a decent set of clothes. He's also superhumanly strong, faster than the proverbial speeding bullet, and can fly. Think of Superman, only without the shiny smile or the PR image, and without the inclination to avoid causing incidental damage to all and sundry whilst apprehending criminals. He's unique, lonely, reviled by the general public he's attempting to save from themselves, and, understandably, somewhat bitter about it.

Frankly, I don't blame him.

Enter Ray Embrey (Jason Bateman), one of the people he saves, a somewhat lack-luster PR agent who offers his card to John as a way of thanking him for saving his life. Ray's wife, Mary, (Charlize Theron) is less than enthusiastic about his plan to repair John's somewhat deplorable public image, but Ray is set on helping his superhuman client.

From there, the story more or less follows on the expected path of recovery, discovery, and ultimately, acceptance, interrupted by various felons and therapy groups -- sometimes at the same time.

Will Smith's performance is excellent; empathy with the protagonist is easily engendered, and Will makes the problems of a superhero believable. His actions when dealing with the minutiae of day-to-day life, and his struggles to behave in a socially responsible fashion - not smashing up the road when he lands, for example, or learning to thank people - come through in brilliant colours. Jason Bateman turns in a good show as the foil, feeding the lines to Will in a workmanlike fashion reminiscent of William Macy's role in Mystery Men; in this case his role requires this staid performance, as he is capable of more when needed.

Sadly, Charlize Theron is the weak link, proving only acceptable. While her actions are all one could hope for, she doesn't engender much empathy for her difficult position; certainly nothing to write home about. This may, of course, be deliberate...

The plot is fairly predictable, but then, it's not like you're there to watch where we go -- it's all in how we get there. And Hancock arrives in style; watch for the little features when John uses his powers -- pretty much every time he does, something goes wrong, somewhere.

Hancock is not one of your high-brow movies, but it's a pleasant way to pass the time while chewing down on the popcorn. It's worth renting, but probably not something you'll watch more than once or twice. It's stylish but without a lot of substance.