Last week we covered the first half of Batman: The Dark Knight Returns, a two=part film released in 2013 that adapted Frank Miller's comic run of (more or less) the same name. At the time I marveled at how well the film worked, considering Miller's eventual slide in "old man yelling at Muslims to get off his country" madness. It's easy to dismiss everything the man wrote considering his later works, but there was a spark to his earlier stories that still works today, and it carries through to the films adapted from those stories. The Dark Knight Rises, Part 1 was a solid tale, as was Batman: Year One. The question was whether the third part of this trilogy, Batman: The Dark Knight, Part 2 would be as good. 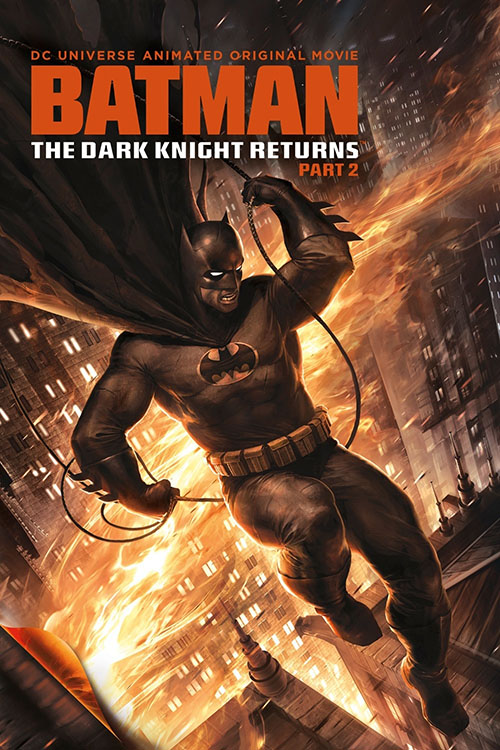 I had some doubts at the time largely because I didn't really think the second half of the comic series was as good as the first. There was a certain thrill in seeing BatmanOne of the longest running, consistently in-print superheroes ever (matched only by Superman and Wonder Woman), Batman has been a force in entertainment for nearly as long as there's been an entertainment industry. It only makes sense, then that he is also the most regularly adapted, and consistently successful, superhero to grace the Silver Screen. come out of retirement to take on a whole new gang of bad guys. That section of the two-parter felt fresh and interesting as it took on an Old Man Batman, gave him a new Robin, and then set him against new villains we hadn't really seen before (yes, Two-Face was also there, but the real threat was the Mutants). All of that combined to create a story that had solid energy. The second half, though, didn't really have that same freshness. Instead it gave us a tale of Batman fighting SupermanThe first big superhero from DC Comics, Superman has survived any number of pretenders to the throne, besting not only other comic titans but even Wolrd War II to remain one of only three comics to continue publishing since the 1940s., with a lot of other references to past continuity. The spark I really enjoyed was missing, and while there were interesting moments, I kind of felt like the comic series ran out of steam once the Dark Knight had risen (so to speak). Would the film make this whole story better, or would it have the same flaws as the comic?

As a fairly faithful adaptation of the arc (I can't speak to what things the movie changed as its been years since I last read the comic) the movie does follow the same arc, with the same references back to old continuity. I think that does make this film a bit weaker than the first half, in large part because the continuity of the DC ComicsOne of the two biggest comic publishing companies in the world (and, depending on what big events are going on, the number one company), DC Comics is the home of Superman, Batman, Wonder Woman, and just about every big superhero introduced in the 1930s and 1940s. universe has moved on from the place this version of Batman existed in. The Batman Miller was writing towards, the characters around him, the things he had to deal with are all past now in main DC Continuity and it makes for a weird watch when we see all these past bits of continuity show up here like they're just the way of the universe. I'm not saying the film needed to update everything but, at the same time, it does feel like the impact this story had, the promise it had for the future of the DC universe, is missing now and that hurts the film a bit in the long run.

To it's credit (and the credit of the comics), Part 2 is a solidly compact and realized single film all on its own. Having come back from retirement in the last film this second half find Batman (Peter Weller) dealing with a pair of new issues. First we have the Gotham P.D., headed up by newly appointed Commissioner Ellen Yindel (Maria Canals-Barrera), declaring the Bat a wanted criminal. Meanwhile, as the tide of public opinion turns against Batman (and his hyper-violent ways), this seems to shed new light on Batman's greatest foe, the JokerOne of Batman's first villains, and certainly his more famous (and most popular), the Joker is the mirror of the Bat, all the insanity and darkness unleashed that the hero keeps bottled up and controlled. (Michael Emerson). Maybe Joker wasn't really the monster everyone said, that he was just turned into one by the evil Bat. Of course, Joker being Joker, he quickly goes back to his old ways, killing a whole ton of people, which forces Batman to take on the Clown Prince one last time, for keeps.

All this carnage, though, puts a bigger spotlight on Batman, as well as his new Robin, Carrie Kelley (Ariel Winter), and this attracts undue attention on the duo from the highest power: the U.S. Government and their Superman (Mark Valley). Soon, Big Blue has to step in to stop Batman, whatever it takes. This leads to a fight (presumably to the death) between the two heroes, winner takes all for the fate of vigilantism, for Gotham, and for the country. Who's right and who's wrong will be decided in a battle of blows on the mean streets of Batman's city. 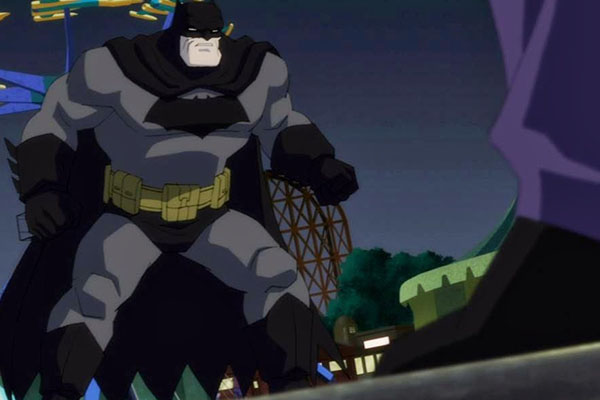 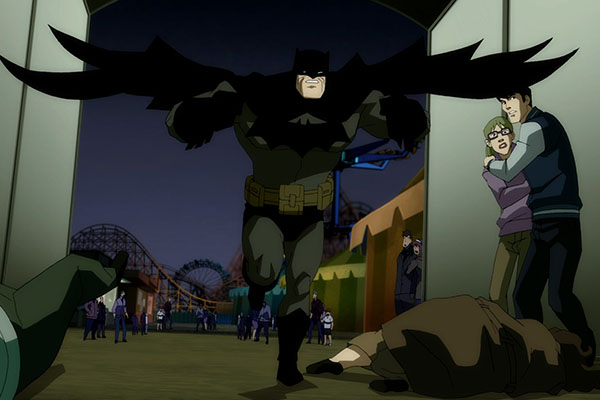 All things considered, the second half of The Dark Knight Returns isn't a particularly deep tale. It's frankly pretty linear, with obvious cause and effects through out. Joker gets out of the mental institution so of course he goes and kills guys (because Joker gotta Joker). Batman makes a lot of noise so Superman has to step in. The two fight, and of course Batman has a way to win (because that's who Batman is). Where the first half had questions about i everything Batman was doing was right, if he was actually helping the public good of Gotham, this second half doesn't bother analyzing all that. He's back, he's the hero, and he has worse things to worry about that moral justifications. He's the big damn hero so if he has to kill the Joker, or sink the Regan administration (a think that basically does happen) then it's fine because he's Batman.

I'd say the film was trying to raise the issue of Batman's morally grey choices by contrasting him against Superman, who is usually held up as the paragon of virtue, but this isn't that Superman. The Superman we have here is a full owned and operated agent of the U.S., a guy who very clearly fights for the "American Way" (emphasis on America). If anything, Miller's target seemed to be the inherent fascism that Superman was capable of, an ironic turn of events considering where Miller's own politics would go in the years following. But for that to land, Batman has to somehow be the paragon, and it's an odd fit for the character.

The films tries to make it work. It puts Gotham into a long black out, with rioting and violence caused after, and the only person that can bring reason and sanity to the streets is, for some reason, Batman. Hearing him make speeches and rallying crowds makes it seem like the movie (and the story before) had lost sight of what made Batman work. Superman should be making these speeches. Superman should bring the good out of everyone, should be the shining beacon to unite us all. Clearly Miller of the 1980s had other ideas (and very specific complaints about the Regan administration he had to vent). It's fun, in a silly way, to see Batman lead the city, but it doesn't really work for the character.

The film then had a big, climactic fight between Batman and Superman, and it does work at a visceral level. Watching these two titans (one of whom is sheathed in a robotic suit to even the odds) gives us all the bam-pow superhero action we want. It's still weird to see these two fight, especially considering they seem to be fighting from opposite sides of where they should be, but the basic action, and fury behind it, holds up well. And the ending to follow (which I won't spoil, just because) does work on its own level, too. None of it really gels together but, in the moment, it works as a base, lizard-brain level. 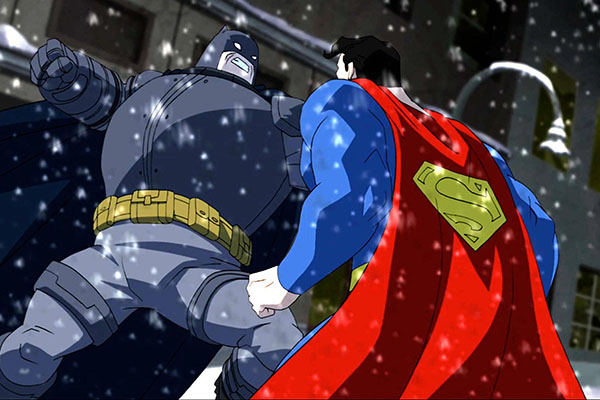 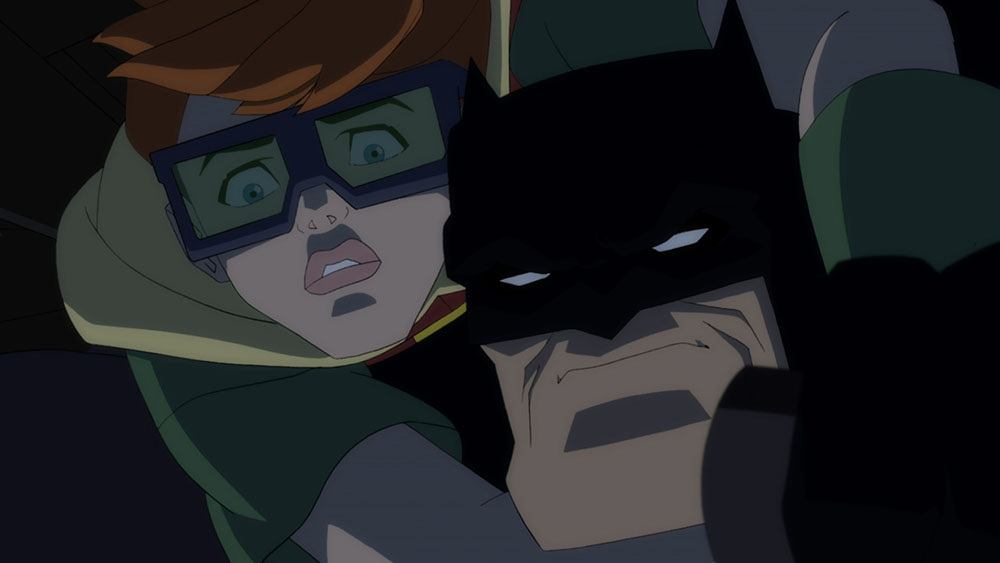 Really, the interesting legacy of The Dark Knight Returns, especially in this second half, is in how the DC Universe has moved on. Superman of today has very much moved on from the "American Way!" toting version of the character (just look at Superman & Lois and it's version of the character he tells the U.S. Government that's he's sworn to protect the world, not just one country). Batman and the Joker had circled each other multiple times since and the Batman we have today wouldn't kill the Joker, no matter what. And, of course, the very reason why Batman would retire (the death of Jason Todd), was retconned away as well. This Batman tale is a of a very specific time and place that doesn't exist anymore.

I didn't hate the second half of Batman: The Dark Knight Returns but I also don't think it's anywhere near as interesting as the first part. That first movie is a solid, self-contained story that revives Batman and make this version of the character interesting. The second half might feel like a bit of an inevitable conclusion (where could the character go after that first half?), but it's very much the weaker, less dynamic story. Together they make for a fine movie, but it's the first half that really carries the day. In the future I might just watch the first half and skip the second part because, honestly, it doesn't have the narrative weight it needs. It's a fine, if shallow, Batman versus Superman story (and certainly way better than the latter Batman v Superman: Dawn of Justice which drew much inspiration from this story) but it just doesn't have enough of what I want to make it a must see continuation on repeat viewings.